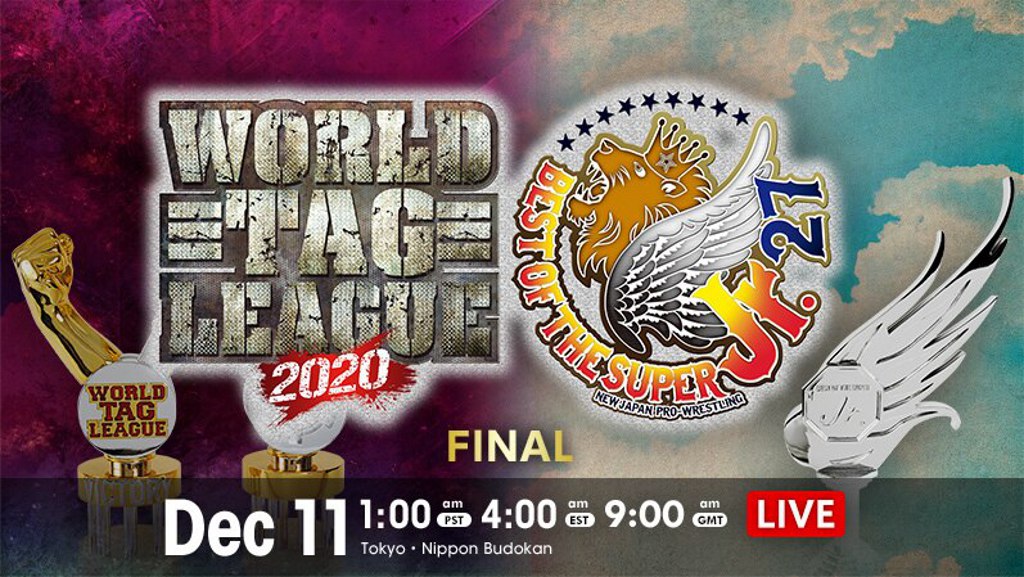 The Bullet Club trio attacked before the opening bell. Fale and Yano started off as the legal men. Yano untied a corner pad and used it as a weapon on Fale, but Fale no-sold it. Yano went for a slam on Fale, but failed.

Ishimori tagged in and got sent into the buckle. SHO tagged in for an extended sequence with Ishimori. They had a nice back and forth. SHO hit a spear, Ishimori hit a handspring kick, then both tagged out.

Eagles peppered Owens with kicks. Eagles hit a pair of meteoras in the corner. He missed a follow-up 450 splash. Owens missed a pump knee strike, but blocked Turbo Backpack.

Owens hit a Jewel Heist for a near fall. Fale tagged in for the tandem Grenade Launcher and Owens pinned Eagles.

After the match, Yano tried to slam Fale again and failed again. Fale then destroyed Yano’s KOPW trophy with a stomp.

Okada and Ospreay began with an intense striking battle. O-Khan and Tanahashi got tags. Henare jumped in for some tandem spots with Tana, including a double crab on O-Khan.

O-Khan cut Tanahashi off with a kneebar. Cobb tagged in and hit a backbreaker. O-Khan and Cobb each hit Tana with gutwrench suplexes. Ospreay tagged in for a 3-on-1 on Tana, hitting a missile dropkick.

Tanahashi came back with a dragon screw on Ospreay and tagged Okada. Okada hit a running back elbow, cleared the apron, hit another back elbow in the corner, then hit a DDT on Ospreay for a near fall.

Ospreay fought out of an air raid crash neckbreaker attempt. Cobb and Henare got tags and did some impressive power spots. Henare really needs to go somewhere else, he would be much higher on the card in any other promotion.

Tana jumped in for a slingblade on Cobb. Henare covered, but Ospreay broke up the pin. Henare ran into a pump kick from an interfering O-Khan. O-Khan used a kneebar on Tanahashi to neutralize the interference threat.

Cobb then hit a Tour of the Islands on Henare for the pin.

O-Khan continued to use the kneebar after the bell. Okada jumped in to make the save.

Cobb attacked Okada. Ospreay then hit an Oscutter on Okada. Priestley tossed O-Khan a chair. O-Khan hammered away at Tanahashi’s left leg with the chair.

The Empire stood tall after their victory.

The Bullet Club squad attacked before the opening bell. Togo dragged SANADA to the ramp and choked him out with a ligature. Young Lions and staff tended to SANADA as the match began.

Togo removed a corner pad and Shingo was whipped into the exposed buckle. Yujiro took the ref while EVIL threatened to use Yujiro’s cane on Shingo.

An enraged SANADA jumped in and went after EVIL. He took him down and hammered him with right hands. SANADA shoved the referee down and continued beating EVIL around ringside. This was the most emotion SANADA has ever shown.

Shingo hit a sliding lariat and a Last of the Dragon on Yujiro for the pin.

SANADA continued attacking EVIL after the bell. Young Lions tried to pull SANADA off, but he tossed them aside. SANADA hammered EVIL with right hands and they brawled to the back.

In the ring, Jeff Cobb appeared. Cobb picked up Shingo’s NEVER Openweight title belt. Shingo tried to grab the belt back. Cobb hit Shingo with Tour of the Islands and stomped to the back.

So both EVIL vs. SANADA and Shingo vs. Cobb for the NEVER title look to be Wrestle Kingdom matches.

A promo video aired for the 49th anniversary show on March 4th at Budokan.

A promo video for an appearance at Wrestle Kingdom by a Japanese comedian dressed like Don King. Apparently he is Noritake Kinashi, also known as Don Kinashi.

I don’t know, man. I need to learn Japanese.

This was all action.

Ibushi and Naito began with a series of counters and teases, previewing their Wrestle Kingdom match. Ibushi hit a dropkick to establish the early advantage. Wato got a tag and BUSHI and Naito doubled up on him. Naito and BUSHI mocked Tenzan by hitting Mongolian chops.

Wato came back with a series of kicks on BUSHI, then we were back to Naito and Ibushi. Naito got the upper hand in this exchange, hitting combinacion cabron in the corner, then an enzuigiri and a DDT.

BUSHI tagged in and hit a missile dropkick and DDT on Ibushi for a two count. BUSHI hit a swinging neckbreaker for another two as Wato broke up the pin.

BUSHI hit Ibushi with a backstabber. Ibushi came back with a high kick. Naito jumped in. Ibushi held Naito up. Wato hit a springboard forearm and a tornillo to take out Naito.

Ibushi hit a jumping knee strike to the head and a Kamigoye on BUSHI for the victory.

This was an excellent match.

Finlay and Loa began with some simple spots — tackles, drop downs and headlocks. Juice and Tama tagged in. Jado tried to trip Juice from the floor and got ejected by ref Marty Asami.

Finlay and Juice went to work on Tama’s left arm. After a miscommunication spot by FinJuice, Loa tagged in and cut off Finlay. Loa hit a blue thunder bomb for a near fall.

Finlay went for a tag but Tama pulled him off the apron. Juice finally got a tag at the ten minute mark. He hit a plancha to Loa, then went after Tama with a clothesline and a high cross off the top.

FinJuice went for a Hart Attack. Instead, Loa speared Juice. Finlay got hit with a Tongan Twist. Loa hit a diving headbutt off the top to Juice. Tama followed with a top rope splash for a near fall.

G.O.D. called for a super powerbomb. Tama missed the setup splash in the corner. All four guys hit big moves and all four went down. Juice hit Loa with a Left Hand of God, then collapsed again.

Juice hit Tama with a cannonball and a series of jabs. Juice called for Pulp Friction but got distracted by Jado walking down the ramp. Tama used a kendo stick on Juice and made a cover. Finlay broke up the pin.

Loa used the OJK on Finlay. Tama used a sharpshooter on Juice at the same time. Juice fought to the ropes to force a break.

Jado called for a super powerbomb. Tama hit a running splash in the corner. Loa tried to execute the powerbomb, but Juice hit a super hurricanrana instead.

FinJuice teased a Doomsday Device. Loa shoved Finlay off the post. Jado jumped in with a kendo stick. Juice cut him off and broke the stick.

KENTA ran in with the U.S. title briefcase and clocked Juice with it.

G.O.D. hit the super powerbomb and Tama covered Juice for the pin.

Winner: Guerillas of Destiny via Pinfall to become the winners of the World Tag League 2020 tournament.

After the match, KENTA took photos with his phone as G.O.D. and Jado posed with the World Tag League trophies.

This was not your typical high-flying Hiromu match filled with a bunch of high risk moves. Instead, they told a great story and worked a NJPW strong style main event match. This was superb.

They started slowly by Hiromu standards. They traded tackles and side headlocks. Hiromu then went to intiate one of his trademark palm strike to the chest sequences. Desperado was having none of it and immediately went for Numero Dos. Hiromu forced a break.

The pace picked up from there. Desperado used an assist from an unwitting referee to hit a basement dropkick to the knee. Desperado sent Hiromu outside and sent Hiromu into the barricade.

Back in, Hiromu sold his back from being sent into the fence. Desperado hit a snap suplex for two. Desperado went after Hiromu’s legs, looking to set up Numero Dos, the same strategy he used to beat Hiromu earlier in the tournament. Desperado expossed a buckle.

Hiromu used a misdirection spot to set up a hurricanrana. He landed a low dropkick, but after two spots involving running, Hiromu stopped to sell his leg at the ten minute call.

Hiromu stretched Desperado over the top rope, choking him with his legs. Hiromu hit a wheelbarrow slam on the floor, then a shotgun dropkick off the apron to the floor.

Back inside, Hiromu hit a falcon arrow for a near fall. He teased a DVD into the buckle but Desperado blocked. Hiromu blocked a spinebuster attempt and a back suplex attempt.

Desperado hit a kneebreaker. He went for Numero Dos, but Hiromu forced an immediate break by rolling to the ropes. Desperado got launched into the buckle with a release German suplex.

Hiromu went for a Dynamite Plunger. His knee gave out instead. Desperado blocked a thrust kick. Hiromu then connected with two superkicks at the fifteen minute call. Hiromu hit a DVD into the turnbuckle pad, then another in the center of the ring.

Hiromu went for Time Bomb. Desperado slid out and locked in Numero Dos. Hiromu reached the ropes, but Desperado used the full four count before breaking the hold.

Hiromu escaped Guitarra de Angel and rolled outside. Desperado teased a suicide dive. Hiromu cut him off in the ropes. Hiromu went for a sunset bomb but overshot his mark. Desperado threatened to use his Jr. Heavyweight Tag belt, but ultimately attacked Hiromu’s leg with a chair.

Back in, Desperado hit Guitarra de Angel for a two count, then immediately transitioned to Numero Dos at the 20 minute call. Somehow, Hiromu reversed Numero Dos into a destroyer. Both men were down in the center of the ring.

Desperado shoved Hiromu into the Red Shoes the ref, who took a bump. Desperado hit a low blow. Hiromu blocked a straight right by hitting a big right hand of his own.

Hiromu tore off the top half of Desperado’s mask. In a dramatic moment, Desperado tore the rest of his own mask off himself.

The two then engaged in a furious sequence of strikes. After trading, Hiromu dropped Desperado with a palm strike. Desperado answered, dropping Hiromu with a right hand. Hiromu blocked Pinche Loco and hit a headbutt.

They charged each other and hit simultaneous lariats. Desperado kicked out the left leg. Hiromu popped back up and hit a superkick.

Desperado ducked a lariat and went for Pinche Loco. Hiromu reversed into a DVD into the exposed buckle. Hiromu hit Time Bomb — but Desperado kicked out.

Hiromu hit a second victory royal. He hoisted Desperado up at the 30 minute call. Hiromu hit Time Bomb II, then covered for the pin.

Winner: Hiromu Takahashi via Pinfall to become the winner of the Best of the Super Juniors 2020 tournament.

Hiromu cut a promo after the match. He called out to Desperado as he was being helped to the back. Hiromu said he won this one, but they will be facing each other until they retire.

Hiromu fought back tears as he was handed the BOSJ trophy.

Hiromu challenged the winner of the Super-J Cup. He said he wants that match before he faces Taiji Ishimori for the IWGP Jr. Heavyweight title.

Hiromu then closed the show with a babyface promo, putting over the crowd.

The show ended with confetti falling.