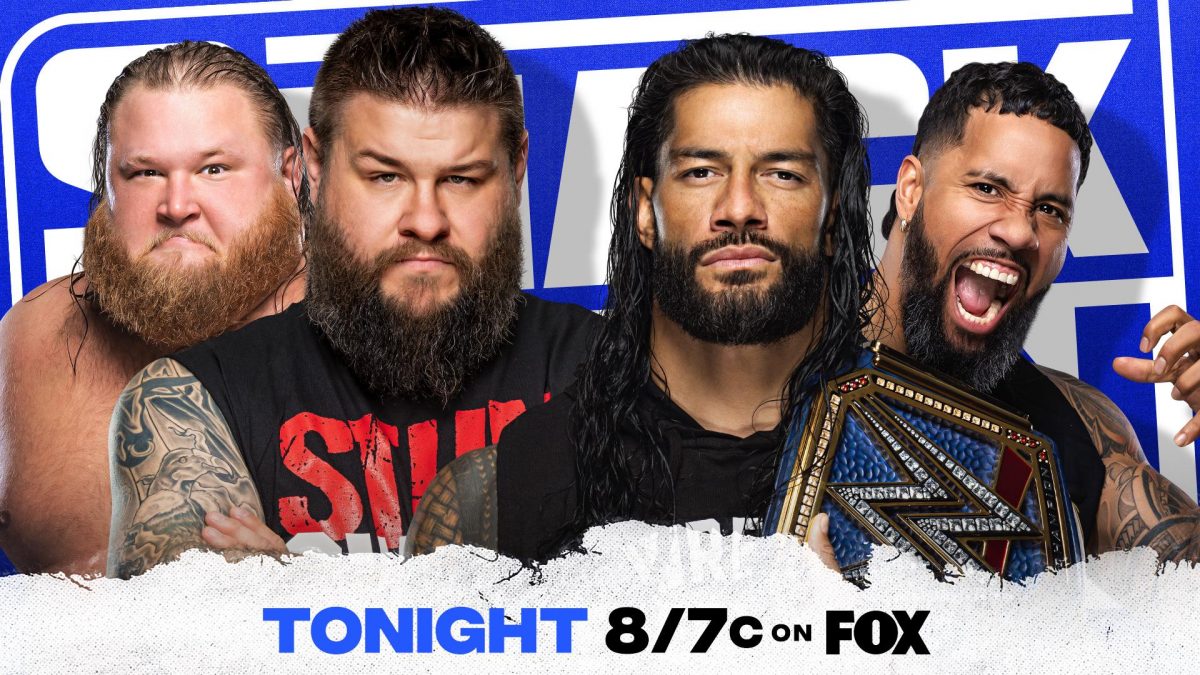 A graphic honoring Pat Patterson is on the screen with WWE superstars, including Vince McMahon and Gerald Brisco on stage.

Kayla Braxton is in the ring as she welcomes everyone to SmackDown. She introduces the WWE Universal Champion Roman Reigns to the ring naming his achievements in the WWE. Roman makes his way down to the ring with Paul Heyman and Jey Uso.

Roman tells Kayla that she forgot an accolade as Heyman jumps in and concludes the introduction. Kayla says that Roman has become a commanding figure in the WWE ThunderDome and what happened last week. We see a clip of last week’s show with Jey going up against Kevin Owens.

She asks Roman if he fears Kevin. Roman laughs and tells her this is probably the most viewed thing she has ever been a part of and she asks him stupid questions. They have someone like Michael Cole who could have asked him questions but instead they waste it on her. Next questions.

Kayla asks if he is using Jey as a pawn and manipulating him. Roman says those are stupid words for stupid people. Does he look like someone who manipulates? He is a protector, a provider. Jey, one half of the greatest tag team of his generation, but what has he done in the past few months? Has she done any research? They give her a huge opportunity. And she wastes it in her first two questions.

Heyman cuts in and says that according to his friends at Fox, the ratings have been as high as they have ever been the entire year because of Jey Uso being in the main event. Roman is a motivator.

Kevin’s music hits and out comes Kevin Owens. He says last week he made it clear that he doesn’t fear him and why wait until later tonight. They can settle this right now. Kevin gets in the ring. Jey tells him they run this show, they accept, easy. Kevin tells Jey he wasn’t talking to the buss boy, he was talking to the head of the table. He asks Roman if not now, TLC. He is the head of the table, let’s get a table in there, a ladder, chairs. Put the title on the line and they could settle it like men. Or they fight now.

Roman laughs. He says they don’t back down or fear anyone. They accept and he’s lucky because if he was the man he used to be, he would beat him up. But there’s a time and a place for everything. He’s a gentleman, there’s a lady in the ring. He throws the microphone and leaves the ring.

Kevin tells Roman that he’s not a gentleman, he’s a bitch. 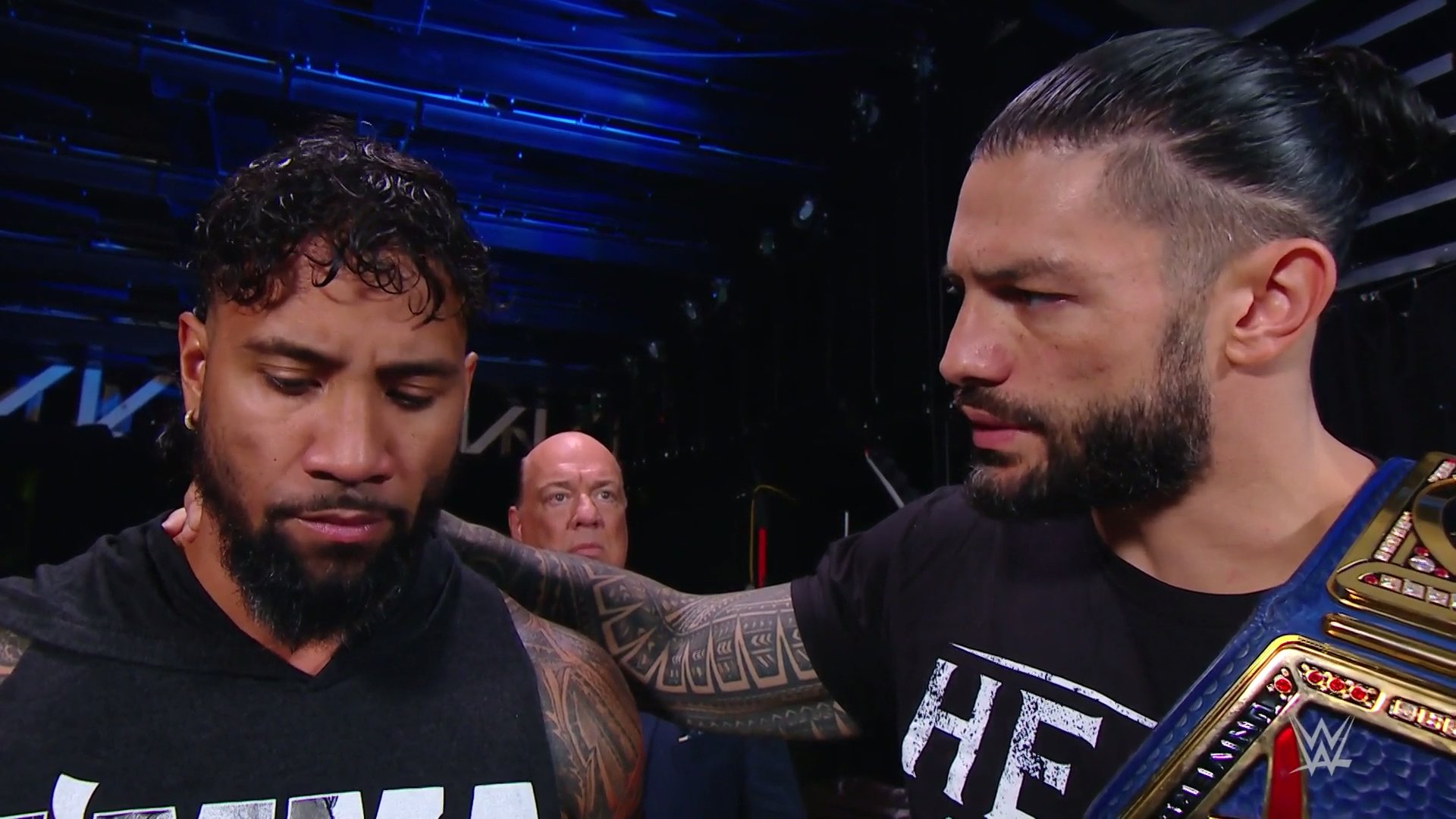 Jey tells Roman he may have overstepped this time again. Roman tells him he knows he meant well but there are consequences for everything he does as Roman walks away.

Bianca Belair joins the commentary team. The bell rings and we are under way. Bayley gets Natalya stuck in between the ropes and on the ring apron. A stunner onto the second rope drops Natalya onto the outside. Bayley with a drop kick as she talks trash to Bianca. Natalya throws Bayley into the ring steps.

Back from commercial, a running knee to the face by Bayley followed by a clothesline. Bayley goes for a knee to the face but Natalya moves out of the way. She gets the sharpshooter onto Bayley as Bayley taps out.

The bell rings and we are under way. Nakamura and Rey start the match. A hurricanrana by Rey takes Nakamura down. Big E is tagged in and as is Dolph. Big E dropps Ziggler down. Daniel Bryan is tagged in. Bryan off the top rope with a double axe handle. An arm bar by Bryan followed by an uppercut.

Bryan with a shoulder block but Sami trips Daniel up on the ropes as Ziggler hits Bryan from behind. Bryan runs to the ropes and a suicide dive onto Zayn. Bryan climbs the top rope but Ziggler with a drop kick knocks him down.

Back from commercial, both Bryan and Ziggler with a double clothesline as both are down. Nakamura and Big E are tagged in. A belly to belly by Big E. The big splash by Big E as he goes to send Nakamura to the ropes but Nakamura with a kick. He runs towards Big E but Big E slams him onto the mat. He goes for the cover but Ziggler breaks it up. Ziggler on the ring apron, Big E runs towards him but a knee to the face. Sami is tagged in as Big E goes for a spear but he hits shoulder first on the ring post.

Sami with a kick followed by the brainbuster. He goes for the cover but Bryan reverses it into a cover, Sami gets out of it. Inside cradle by Bryan as he gets the pin.

All six men are face to face in the ring. Nakamura and Sami are thrown to the outside as Ziggler is face to face with all three men. He tries to shake their hand and begs them for mercy. An atomic drop by Bryan as Ziggler drops onto the second rope and the 619 by Mysterio. Big E with the Big Ending.

Kayla is backstage with Kevin Owens and asks him about his match at TLC. Owens says what bothers him about Roman is that he used to respect him. He was never the kind of guy to look down on people or have his own locker room. But not anymore. He doesn’t know if it’s Heyman but it’s despicable. Owens says he tries to be gracious now because without them, there’s no him.

In comes Otis as Kevin asks Kayla to leave. Otis tells Kevin that what he said about Roman is right because Roman doesn’t respect them.

Sasha and Carmella are in different rooms being interviewed. The interview is set to start with Carmella but Sasha says she has something to say. Sasha says Carmella keeps attacking her from behind, she has her attention. Cole asks Sasha about how Carmella used to be like her. She used to do it all for the WWE universe and if they are more alike than she thinks. Sasha laughs.

They have been training together since the Performance Center. Sasha says Carmella is the first woman to ever win the Money in the Bank. Sasha says the truth is there’s a reason they have never faced one on one and she is out of her league. No matter how hard Carmella tries, she will never be in her league.

Carmella says if she wants to get personal, to get personal. Carmella says Sasha is jealous. This was Sasha’s dream when she was a little girl. But then there is her. On a whim, walks into the PC and she becomes a star. With half the work, she is better than her. She has held onto the SmackDown Women’s Title longer than all of Sasha’s reigns combined. She looks at Carmella, she sees every man’s desire. She will take her title.

Sasha says if Carmella wants an opportunity at the SmackDown Women’s Championship, she has it at TLC. She has never been in the ring with a badder itch than her.

The bell rings and we are under way. Corbin gets Murphy in the corner and a shoulder to the body. He throws Murphy across the ring. Murphy on the ring apron as Corbin throws him back into the ring. Corbin goes for a kick but Murphy moves out of the way. A jaw breaker by Murphy as he goes onto the ring apron.

Murphy climbs the top rope but Corbin grabs Murphy who fights back, kicking Corbin away. A sunset flip by Murphy but Corbin blocks it. A knee to the body by Corbin. He sends Murphy to the ropes as Murphy sends Corbin to the outside of the ring. A kick to the face by Murphy takes Corbin down on the outside. Murphy onto the outside of the ring as Corbin pushes him into the ring apron and throws him into the time keeper’s area.

Back from commercial, Corbin slams Murphy into the mat. He goes for the cover but Murphy kicks out. The two henchmen go face to face with the Mysterio family. Blake and Cutler are revealed to be the two henchmen. Back in the ring, a right hand by Corbin takes Murphy down.

Corbin goes for another right hand but Murphy ducks and gets a sleeper hold on Corbin but Corbin slams Murphy into the corner. Murphy on the second rope as he lands a drop kick. A forearm by Murphy followed by kicks. A flying knee to the face by Murphy knocks Corbin to the outside. Corbin back in the ring as Murphy climbs the top rope.

Wesley Blake and Steve Cutler attack the Mysterio family. Murphy goes to the outside then back in the ring as Corbin hits him with the End of Days. He goes for the cover and gets the pin.

The #SmackDown tag team scene is heating up! pic.twitter.com/bcOYbvhYO6

Roman Reigns doesn’t make his way to the ring. The bell rings and we are under way. Otis slams Jey into the mat. Right hands by Otis as he throws Jey into the corner. Another right hand by Otis as he throws Jey across the ring. Jey with a right hand as he runs to the ropes but a clothesline by Otis takes Jey down. Otis goes for a spear but Jey moves out of the way. Kevin Owens is tagged in. Owens with right hands on Jey but Jey sends Owens into the corner and a Samoan drop. Roman’s music hits and out he comes with Paul Heyman.

Roman grabs the steps and hits Otis with it. Owens attacks Roman from behind. He throws Roman onto the announce table as Jey hits Owens with a suicide dive.

Back from commercial, Jey is tagged into the ring as they double team Kevin Owens. Jey runs towards Owens in the corner but Owens moves out of the way. Owens with a cannonball. A clothesline by Owens followed by a senton. Owens with a DDT. He goes for the cover but Jey kicks out. A Samoan drop by Owens onto Jey. Roman distracts Owens as Jey hits Owens. Jey on the top rope as Roman tells him to go down and to tag him in. Jey climbs down the top rope and grabs Owens but Owens knocks him away and knocks Roman down. He hits Jey with the stunner. He goes for the cover but Roman breaks it up.

Roman with the guillotine as the referee calls for the bell because Reigns wasn’t the legal man.