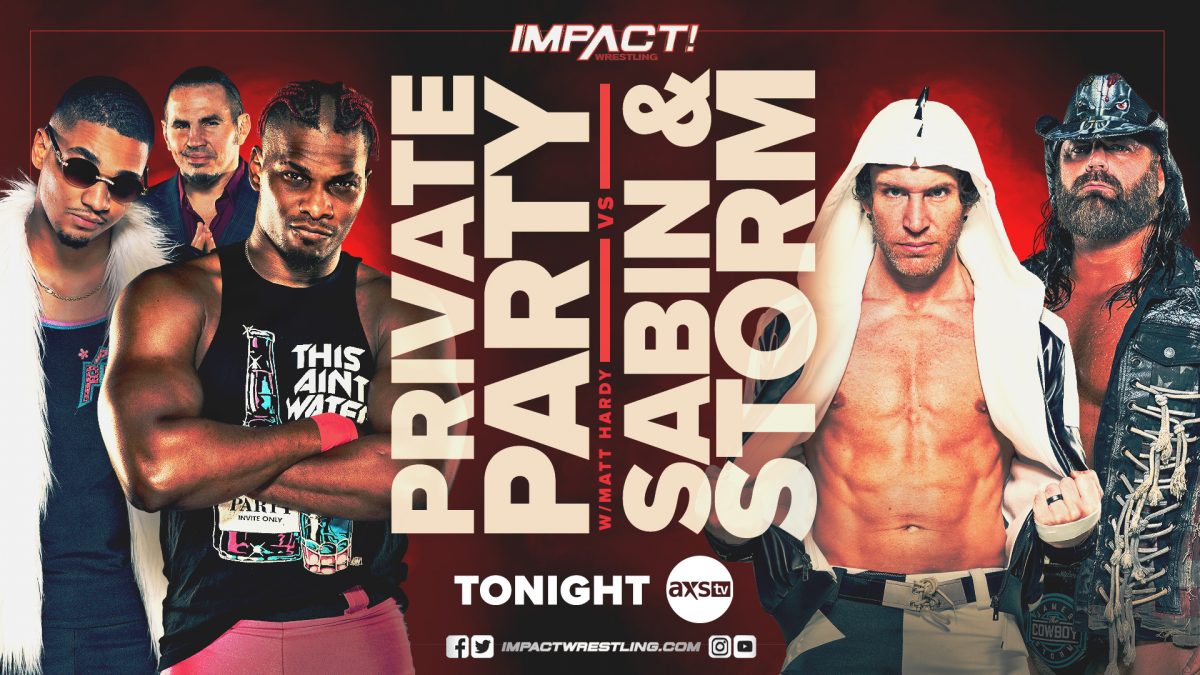 In a clip from after Hard To Kill went off the air last Saturday, Don Callis congratulates AEW World Champion Kenny Omega and IMPACT World Tag Team Champions The Good Brothers on their victory over IMPACT World Champion Rich Swann, Chris Sabin and Moose. “The Invisible Hand” says that he and Omega are already planning their next move but for now, they’re going to take care of business in Jacksonville.

The war from last Saturday’s Old School Rules match continues tonight as Violent By Design looks to cure the professional wrestling business. Referee Brian Hebner is almost taken out in the early going but the distraction allows Young to gain control with a low blow! Rhino avoids a top rope elbow drop to create separation, then builds momentum with a series of clotheslines. Deaner gets in the ring to provide yet another distraction. This time, it allows Doering to attack Rhino from ringside! Young locks in a heel hook to win by submission.

The bell rings but Young won’t break the submission. Violent By Design continues their attack on both Rhino and Jake. Young places Rhino’s ankle into a steel chair as Doering stomps on it. More referees come to ringside in an attempt to stop the madness.

Rich Swann responds to the post-match attack from Moose after Hard To Kill went off the air. Swann says if he Moose wants to prove that he’s the real World Champion, he’ll give him that opportunity tonight.

Detective Acey Romero tells Tommy Dreamer of his latest discovery at Hard To Kill – there’s only set of fingerprints on both the ring rust cologne and the gun used to shoot John E Bravo!

The Good Brothers are in the ring to reflect on their victory in the historic six-man main event last Saturday. Chris Sabin interrupts and reminds them that they never pinned the Motor City Machine Guns to win the World Tag Team Championships. Sabin demands a rematch but Gallows calls out the fact that Alex Shelley is unable to compete. Sabin reveals that he does have a partner and it’s none other than IMPACT veteran James Storm!

But the shocking moments don’t stop there as AEW stars Matt Hardy and Private Party make a surprise appearance! “Big Money” Matt says he now officially represents Private Party and has brought them to IMPACT Wrestling for a warm-up match before tomorrow night’s AEW Dynamite. The Good Brothers suggest they face Sabin and Storm with the winners earning a shot at their IMPACT World Tag Team Championships! Both sides accept and it’s official for later tonight!

.@TheMattCardona is here to prove his fans and himself right! #IMPACTonAXSTV pic.twitter.com/ghmAYQBXvZ

Brian Myers confronts Fallah Bahh, leading to a match between them later tonight.

Kimber and Susan charge their opponents to jumpstart the match in their favor. Jordynne and Jazz quickly turn things around with their brute strength as Jazz pummels Susan with a series of strikes. Jordynne attempts a powerbomb on the floor but Kimber throws her to the ground and it looks as though Jordynne tweaks her elbow in the exchange. Susan follows all the rules of the match and even holds the tag rope! Susan fights off a muscle buster, allowing her and Kimber to remain in control for several minutes. Jordynne finally tags in the legendary Jazz who hits Susan with a DDT for two. Kimber distracts the referee, allowing Deonna to hit Jazz with the Knockouts Title! Susan follows up with the pin for the win.

Taya Valkyrie is revealed as the culprit who sprayed Larry D with ring rust cologne, turning him into Lawrence D who then shot John E Bravo at his wedding! Security takes her off to jail but she’s first confronted by Rosemary. Taya pleads with “The Demon Assassin”, telling her that she only did it to protect her from Bravo. The two long-time friends embrace before security escorts her out of the building. Rosemary is comforted by her partner in Decay, Crazzy Steve.

She FRAMED @legendoflarryd and is going to jail. #IMPACTonAXSTV pic.twitter.com/RK5YOTvTbM

Tony Schiavone and Tony Khan are joined by Jerry Lynn for another AEW paid ad on IMPACT! Khan says he asked Matt Hardy and Private Party to appear here tonight as a response to The Good Brothers appearing on Dynamite in recent weeks. Khan and Lynn reveal that they are at the IMPACT Zone and will scout Private Party’s match against Chris Sabin and James Storm from ringside tonight!

IMPACT World Champion Rich Swann is in the ring and speaks on feeling the pressure of leading the company into war against Kenny Omega and The Good Brothers. Swann says he lives for that pressure but admits to having trust issues with Moose. Swann calls the self-proclaimed TNA World Heavyweight Champion out to the ring. Swann tells him that he wants to give him the World Title match he demanded right here, right now. Moose declines the offer, stating that he’ll get his shot on his time. Swann says he didn’t come here to talk and unloads on Moose! Swann sends him retreating after hitting a top rope Phoenix Splash!

Rohit Raju confronts IMPACT Executive Vice President Scott D’Amore after failing to recapture the X-Division Title from Manik in a 3-Way Match also involving Chris Bey at Hard To Kill. TJP walks in with the X-Division Title, confirming to Rohit that TJP and Manik are indeed the same person. D’Amore awards Rohit a singles match with TJP in two weeks but after he leaves, D’Amore tells TJP that it’s non-title!

Fire ‘N Flava allow Alisha to be the MC for their Fire N’ Flava festival. They try to persuade referee Brandon Tolle to buy a platinum package but are interrupted by Havok and Nevaeh! Fire N’ Flava want no part of them and just like that, all the packages are sold out!

Fallah hits a big leg drop, followed by a running crossbody for two. Myers jumps off the top but Fallah catches him in mid-air and connects with a belly-to-belly suplex! Myers takes Fallah of his feet with a running clothesline. Fallah squashes Myers in the corner, then follows up with a Samoan Drop for another near fall. Fallah inadvertently pokes Myers in the eye. Myers plays it up for the referee but pulls him into the corner, allowing him to connect with a low blow on Fallah! Myers puts him away with the running clothesline.

Gia Miller interviews Ace Austin about his run-in with Matt Cardona at Hard To Kill. Ace is furious that he wasn’t booked for the event and instead had to sit on the LIVE Countdown to Hard To Kill pre-show panel to cover Josh Alexander’s match against Brian Myers. Alexander interrupts and gives Ace some advice – if he wants something, he needs to go out to the ring and take it. Madman Fulton blindsides Alexander as he and Ace employ a 2-on-1 attack. Matt Cardona evens the odds, forcing them to retreat.

Bloody, violent, barbaric – @TheSamiCallihan vs. @TheEddieEdwards in Barbed Wire Massacre was everything we expected. #IMPACTonAXSTV pic.twitter.com/TCQHmkyCnO

IMPACT Wrestling’s physician is caring for Eddie Edwards’ many injuries when Brian Myers demands that he looks at his eye instead. Myers calls Eddie a backyard wrestler, leading to a match being made for next week!

Matt Hardy was in Private Party’s corner. It’s a stalemate in the opening moments as Sabin and Kassidy match each other’s offense hold for hold. Kassidy counters Storm into a tornado DDT from the apron! Storm is perched on the top but Quen dropkicks him all the way to the floor. AEW President Tony Khan and Jerry Lynn appear at ringside as Khan takes notes on the match! Private Party cut off the ring as they begin to wear Storm down. The “Cowboy” is finally able to create separation and tags in Sabin who takes out both members of Private Party with a double crossbody! Sabin quickens the pace with a dropkick to the back of Quen. Sabin pushes off his own partner to hit Quen with an impactful DDT for two. Storm hits a huge lungblower on Quen for yet another near fall! Kassidy holds Sabin down, allowing Quen to follow up with a Shooting Star to his back. Quen soars through the air, taking out Storm with a dive on the ramp. Matt Hardy distracts the referee, and Jerry Lynn hops the guardrail to prevent Sabin from jumping off the top! Private Party capitalizes with Gin ‘N Juice to score the victory!

After the match, reigning IMPACT World Tag Team Champions The Good Brothers come to the ring and stare down their next challengers. Sabin and Storm attack both teams from behind as a huge brawl breaks out to close the show!