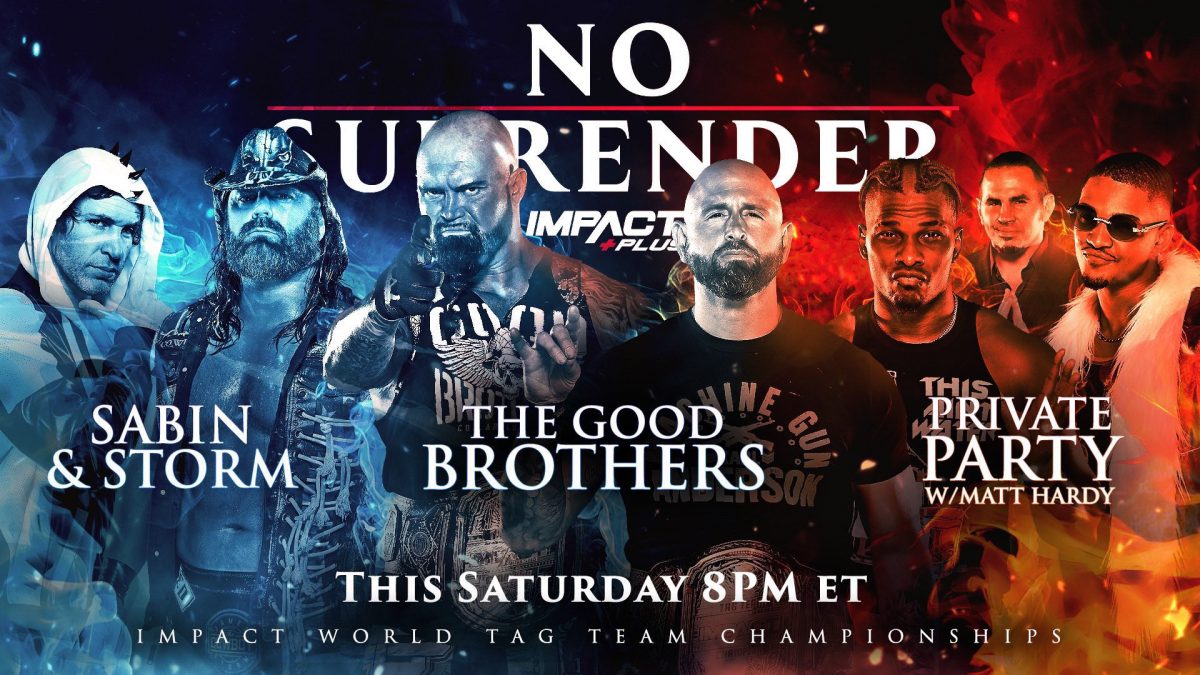 No Surrender on IMPACT Plus Results
February 13, 2021
Nashville, TN
Results by ImpactWrestling.com

Steve uses his speed advantage to get the big man, Larry D, off his feet. All three members of Decay are about to dive but XXXL and Tenille get out of dodge. Kaleb trips up Steve from the outside, allowing Larry to gain control. Taurus headbutts Acey, followed by a Samoan Drop to Larry for two.

Tenille waves a red shirt in an attempt to get Taurus to charge at her. Taurus chases Kaleb around the ring. Larry and Taurus exchange explosive dives to the floor! Acey is about to fly but Rosemary cuts him off. Acey powerbombs Tenille over the top rope, sending her crashing into everyone on the floor! Rosemary blinds Acey with the green mist. Meanwhile, Taurus connects with a modified driver on Larry to score the victory.

Cardona hits Hernandez with an impressive dropkick in the early going. Eddie hits a belly-to-belly suplex on Myers. Eddie chases Myers around ringside but is met by the brick wall that is Hernandez. Myers continues to wear Eddie down as Hernandez rips off the corner turnbuckle, exposing the steel underneath. Eddie creates separation with a back suplex but when he’s about to make the tag, Hernandez knocks Cardona off the apron! Eddie hits “Super Mex” with the Superplex, allowing him to finally make the tag.

Cardona is on fire as he hits Myers with his signature running boots in the corner. Myers connects with the Myers Driver to Cardona for two. Cardona takes Myers off the top rope with a Frankensteiner but Hernandez breaks the pin! Eddie takes out Myers with a dive to the outside. Myers sends Cardona face first into the exposed turnbuckle to steal the win!

Deaner vs. Jake Something

Jake pummels Deaner in the corner with repeated strikes. Deaner tosses Jake to the outside, allowing VBD to attack him behind the referee’s back. Deaner hits a jumping European uppercut off the second rope for two. Jake charges into the corner but Deaner sidesteps. Deaner dropkicks Jake neck-first into the turnbuckle. Jake catches Deaner in mid-air and hits a sidewalk slam to build momentum! Jake follows up with a mini-spear. Deaner comes right back with a neckbreaker for a near fall of his own. Jake soars over the top rope to take out EY and Doering. Back in the ring, Jake connects with the Black Hole Slam to win!

After the match, EY and Doering blindside Jake for a post-match attack. Doering takes him out with a top rope powerbomb through a table!

Suicide and Trey exchange aerial offense attempts until Suicide finally lands a springboard Moonsault. Christian takes out Trey with a dive to the floor. Moments later, Suicide does the same to Christian! Suicide hits a top rope Swanton to Christian. Trey capitalizes with the Hourglass submission, forcing Suicide to tap!

Christian hits Bey and Trey with a double Hurricanrana. Out on the floor, Christian connects with a standing C4 to Trey. Bey takes out Christian with a Vertebreaker to score the pin!

Daivari sends Bey flying with a huge back body drop. Trey catches Daivari off guard with double knees off the top to score the quick elimination.

Alexander fights off a sleeper attempt from Trey. Alexander shows off his incredible strength as he simultaneously hits Bey with a vertical suplex! Alexander catches Bey in mid-air and hits a modified spinning slam, followed by the ankle lock which forces Bey to submit.

Willie hits Trey with a Samoan Drop. Willie follows up with a double Moonsault to both of his opponents. Willie delivers a huge Tower of Doom out of the corner for a couple of near falls! Willie is holding Alexander but gets caught with a top rope Meteora from Trey. Both men cover Willie for the pinfall.

Trey spikes Alexander with a reverse Hurricanrana, followed by a rope-assisted cutter but Ace breaks the count. Ace takes out Trey with a Fosbury Flop to the floor! Ace fights off a sunset flip attempt from Trey but he breaks free and connects with a Cheeky Nandos Kick. Alexander has both men on his shoulders and drives them into the mat! Alexander fights off Fulton and connects with the double underhook piledriver on Ace to score the final victory!

Both teams charge towards each other right at the opening bell! Havok grabs Kiera by her hair and hurls her across the ring. Kiera turns the tide with her quickness, hitting a running dropkick in the corner. Havok and Nevaeh hit a backbreaker running clothesline.

Tasha brings a steel chair into the ring but Havok pries it away. Kiera neutralizes Havok and Nevaeh with brutal kendo stick shots. Nevaeh plants Kiera face-first into the mat but immediately gets caught with a Codebreaker from Tasha. Havok hits a double vertical suplex on both of her opponents. Havok collides with the steel chair in the corner! Tasha follows up with a cutter to Nevaeh onto a street sign! Tasha pins Nevaeh to retain the Knockouts Tag Team Championships.

After the match, Nevaeh is visibly frustrated as she storms to the back without her partner.

Gia Miller interviews IMPACT World Champion Rich Swann ahead of his huge title defense against Tommy Dreamer later tonight. Swann recalls when Moose interfered in their contract signing just a few days ago on IMPACT! Swann reveals that if Moose gets involved in their match tonight, he will be suspended by IMPACT management.

TJP stares at Shera while he’s making his entrance. Rohit capitalizes off the distraction with a huge dive to the floor. Back in the ring, Rohit follows up with his signature running kick but the referee hasn’t rung the bell yet! TJP dropkicks Rohit off the top rope into Shera. TJP takes Shera off his feet with a slingshot crossbody. The fight spills to the other side of the guardrail and the match still hasn’t begun!

Rohit hits a vertical suplex on the unforgiving ramp. Both competitors get back into the ring and the match is finally underway. Rohit avoids a Mamba Splash from TJP but the X-Division Champion resorts to some unique offense instead! Rohit counters a Hurricanrana and face-plants TJP into the mat. TJP hits a Superplex into the Detonation Kick for two! Both men exchange submissions but neither is ready to give up. Rohit hits the drive-by knee for another near fall! Rohit accidentally collides with Shera, allowing TJP to capitalize with the Mamba Splash to win!

Gia Miller catches up with Tommy Dreamer as his IMPACT World Title match against Rich Swann draws near. Dreamer says that tonight, he wants to give the fans one last Tommy Dreamer moment.

Jordynne Grace, ODB and Jazz take turns diving into everyone on the floor! Jordynne and Jazz hit Deonna with a double back suplex. Moments later, Deonna hits Jordynne with Divorce Court to begin the wear down process. Deonna cuts off the ring, preventing Jordynne from making the tag. Jordynne fights her way out of the corner and connects with a Black Hole Slam to create separation. Jordynne makes the tag to ODB who rips the sleeves off Susan and hits her with the Dirty Dozen! The match begins to break down as everyone gets involved! Susan delivers a thumb to the eye of Jazz. Blinded, Jazz accidentally strikes Jordynne with a closed fist. Kimber hits a jumping senton into a sea of humanity on the floor! Jazz locks in the STF on Susan to win by submission.

It’s a stalemate in the early going as Sabin and Kassidy match each other’s offense. Quen dropkicks Anderson into a sunset flip from Kassidy for two. Gallows corners Quen and delivers repeated shots to the body. Gallows distracts the referee as Anderson delivers a shot to Quen from the apron. Kassidy holds Sabin as Quen delivers a standing Shooting Star to his back! Private Party’s tandem offense continues as they hit Sliced Bread to Storm for a near fall. Kassidy hits Gallows with a huge tornado DDT. Moments later, Storm spins Quen with the Eye of the Storm for two!

While the referee has his back turned, Hardy gets involved and hits Storm with the Twist of Fate! Quen follows up with the Shooting Star but Anderson makes the blind tag! Anderson steals the pin and the win to retain the IMPACT Tag Team Championships.

Dreamer sends Rich to the floor with a fallaway slam, then follows up with sliding dropkick under the bottom rope. Dreamer jumps off the apron but Rich avoids him and hits a flying senton. The action is back-and-forth as Dreamer picks the ankle and hits a Death Valley Driver on the floor! Dreamer dislocates his finger in the process as IMPACT’s physician attends to him at ringside. Dreamer refuses to quit as he puts his finger back into place.

The match continues! Swann is draped over the second rope and Dreamer makes him pay with a swinging neckbreaker. Swann doesn’t hold anything back, targeting Dreamer’s now-injured hand. Dreamer drives Swann through the ropes, sending them both crashing to the floor. Swann comes back with slingshot cutter on the outside! Dreamer hits a cutter of his own, this time in mid-air, for a very close near fall! Swann attempts to lock in the Rings of Saturn but Dreamer fights it off into a Spicolli Driver for two! Swann shifts the momentum, then hits a top rope Phoenix Splash to win.

After the match, Swann helps Dreamer to his feet as Moose attacks them both from behind! Moose takes out Dreamer with a spear before repeatedly driving a steel chair into the knee of Swann. Moose stands tall with both the TNA World Heavyweight Championship and the IMPACT World Championship held high.

We see a video package featuring New Japan Pro Wrestling’s Juice Robinson and David Finlay. No Surrender on IMPACT Plus goes off the air…