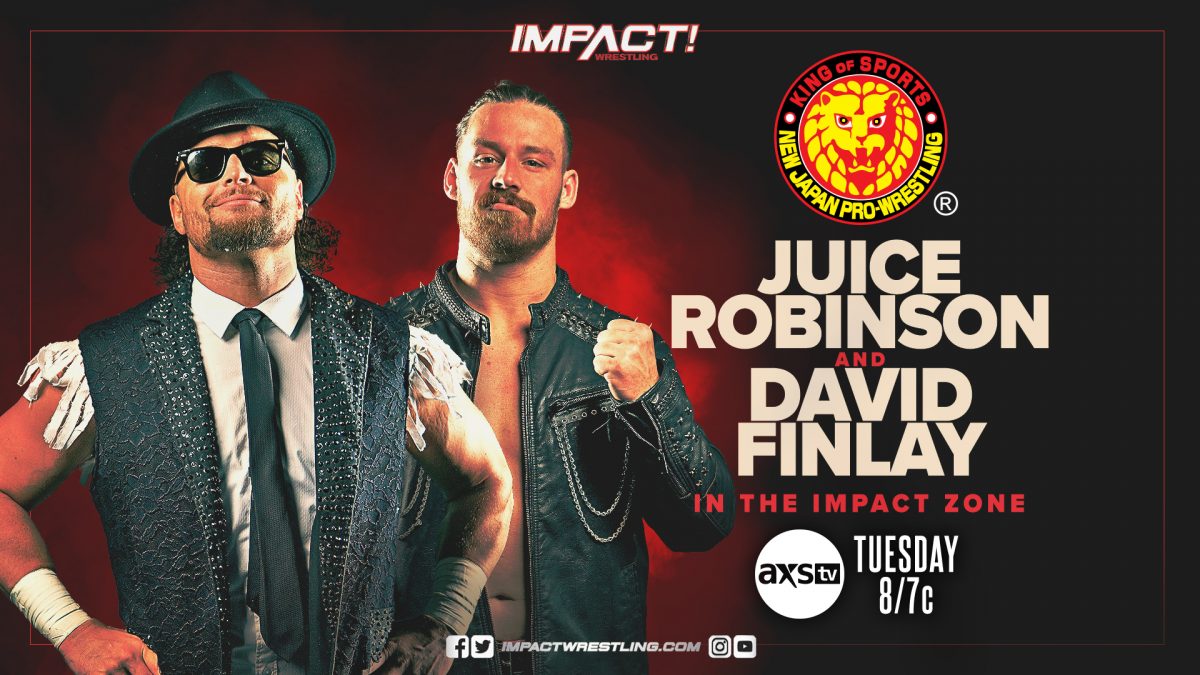 Josh Alexander earned this X-Division Title opportunity by winning the first ever Triple Threat Revolver this past Saturday at No Surrender. It’s a stalemate in the early going as both men match each other’s pace. Alexander catches TJP in mid-air with a backbreaker. TJP locks in a submission but Alexander slingshots him into the turnbuckle to break it up! TJP hits a springboard dropkick to the outside. Back in the ring, he follows up with a crossbody attempt but Alexander rolls through. TJP drops Alexander on his head with a tornado DDT for two. Alexander hits his signature low crossbody. Alexander locks in the ankle lock but TJP finally breaks free. TJP connects with the Detonation Kick, followed by the Mamba Splash to put Alexander away.

Gia Miller sees Tommy Dreamer walking out of IMPACT management’s office. Dreamer notes that IMPACT World Champion Rich Swann is not here as a result of the post-match attack from Moose at No Surrender. Tonight, he seeks revenge and it’s going to be contested under Old School Rules!

Brian Myers lives up to his end of the deal when he pays Hernandez for successfully teaming with him in their victory over Eddie Edwards and Matt Cardona at No Surrender. Tonight, Hernandez looks to make some more cash when he takes on Matt Cardona in singles action. Fallah Bahh confronts Hernandez and convinces him that he can double his money. Hernandez begrudgingly agrees.

Willie Mack vs. Daivari vs. Suicide vs. Trey Miguel

Willie takes out Trey and Suicide with a big double clothesline. Suicide is about to fly but Daivari sends him crashing to the mat. Willie hits Daivari with a sitout powerbomb. Willie hits a double standing Moonsault to Suicide and Trey! Suicide gets blindsided by a Meteora from Trey for the finish.

Sami Callihan confronts Trey on his way to the back. Callihan reminds Trey that he didn’t win the high-stakes Triple Threat Revolver at No Surrender, but was able to score the victory tonight – all because he doesn’t have any passion.

Ace Austin barges into Scott D’Amore office and demands a shot at TJP’s X-Division Title for winning the Super X Cup at Genesis. D’Amore agrees that Ace deserves a shot but also states that there are other deserving challengers. D’Amore announces a six-man tag team match next week. The winning team will face off in a Triple Threat with the winner of that match earning a shot at the X-Division Championship!

.@The_Ace_Austin wants a shot at @MegaTJP, but he’ll have to settle for EARNING his No. 1 Contender spot. #IMPACTonAXSTV @ScottDAmore pic.twitter.com/QhGpbMz3DS

Matt Cardona looks to even the score after he and Eddie Edwards came up short against Hernandez and Brian Myers at No Surrender. Cardona is in control early as he flips over the top rope and collides with Hernandez on the floor. Myers distracts the referee, allowing Hernandez to counter Radio Silence with a low blow. Moments later, Cardona avoids the Border Toss and successfully connects with Radio Silence to win!

After the match, Brian Myers interrupts Gia Miller’s in-ring interview with Cardona. The former friends argue about their differences as of late. Myers says that IMPACT Wrestling is his as Hernandez attacks Cardona from behind. Myers and Hernandez beat him down until Eddie Edwards makes the save!

Havok asks Nevaeh why she hasn’t heard from her in the days following their loss to Knockouts Tag Team Champions Fire ‘N Flava at No Surrender. Nevaeh is disappointed in herself that she continues to lose their matches. Tenille Dashwood tells Havok that she would make a much better partner. Nevaeh doesn’t take her comments lightly and challenges Tenille to a match later tonight.

After the huge announcement as No Surrender went off the air, New Japan Pro Wrestling’s David Finlay and Juice Robinson are set for action here on IMPACT! FinJuice hit a double running bulldog to Luster. Moments later, Luster turns the tide with a massive spinebuster on Finlay. Reno Scum begins to wear Finlay down. Finlay kicks Thornstowe into his own partner to create separation and make the tag. The pace quickens as Juice goes on the attack. Juice hits Thornstowe with a cannonball in the corner for two. FinJuice pay homage to great tag teams of the past as they hit a Superplex splash combo to win!

After the match, reigning IMPACT World Tag Team Champions The Good Brothers confront FinJuice. The Good Brothers reminisce about their time in New Japan Pro Wrestling when FinJuice were just Young Boys carrying their bags. Juice gets on the mic and tells them that they’re not Young Boys anymore. Juice tells an embarrassing story about Karl Anderson to give FinJuice the upperhand in the exchange.

At the bar, Rohit Raju blames Shera for why he lost to TJP at No Surrender. Shera pushes Rohit into James Storm and Chris Sabin, which leads to Storm cracking a beer bottle over Rohit’s head!

Johnny Swinger interrupts and invites them to Swinger’s Palace. Fallah Bahh quickly loses the $10 that Hernandez invested with him earlier tonight as Sabin and Storm have a good time.

Nevaeh drives Tenille into the ring post, sending her all the way to the floor! Kaleb gets involved as he usually does, allowing to Tenille to gain control. Tenille continues the beatdown with a flurry of kicks in the corner. Nevaeh hits a sidewalk slam to start building momentum. Tenille connects with Taste of Tenille, followed by the Spotlight Kick to score the victory.

After Violent By Design put Jake Something through a table at No Surrender, Deaner vows to finish his family business when he faces Jake in a tables match next Tuesday on IMPACT!

Knockouts Champion Deonna Purrazzo tries to convince Scott D’Amore that Kimber Lee and Susan deserve a Knockouts Tag Team Title opportunity. D’Amore ups the ante and says that since Jazz pinned Susan at No Surrender, Susan and Kimber Lee must face Jazz and Jordynne Grace next week with the winners earning a shot!

Next Tuesday at 8/7c on AXS TV and Twitch, don’t miss an all-new episode of IMPACT! as the road to Rebellion continues. Deaner battles Jake Something in a Tables match. Willie Mack, Trey Miguel and Josh Alexander take on Chris Bey, Ace Austin and Black Taurus with the winning team advancing to an X-Division #1 Contenders Triple Threat. Plus more!

A vengeful Tommy Dreamer battles Moose in his signature match type. Old School Rules means there are no disqualifications, no countouts and anything goes! Moose rakes the eyes of Dreamer at ringside. Moose drops Dreamer onto the steel guardrail. Back in the ring, Moose connects with a strong Irish whip into a garbage can. Dreamer fights free and connects with a cutter but Moose astonishingly kicks out at one! Dreamer hits Moose repeatedly with a steel chair. Moose drives the back of Dreamer’s head into the chair with an STO. Moose sets up a table in the corner but it backfires as Dreamer spears him straight through! Dreamer cracks Moose with repeated kendo stick shots but it’s not enough to keep the big man down. Moose comes back with a Uranagi, followed by the No Jackhammer Needed Spear to win.

Moose stands over a defeated Tommy Dreamer as IMPACT! goes off the air.