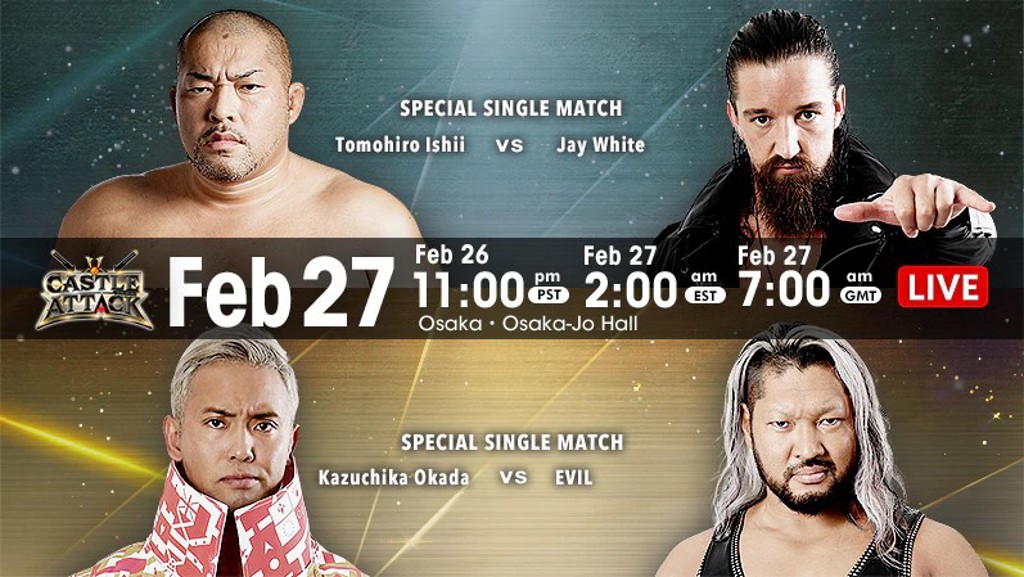 Tanahashi’s side overcame an early sneak attack from United Empire. Tanahashi played some air guitar. Kojima tagged in and got cut off by an interfering Cobb. O-Khan used a head and arm choke on the mat. Ospreay tagged in and continued the attack. Cobb got a tag and did some impressive power spots.

Kojima made a clunky comeback on O-Khan and hit a cutter. Tana got a tag and hit each member of Empire with a dragon screw. O-Khan fought off a cloverleaf attempt. O-Khan and Tana traded strikes and brought the crowd into the match. O-Khan hit a powerslam and tagged Cobb.

Tana avoided a charge into the corner and hit twist and shout. Tenzan got a tag. He did a couple of clever Mongolian chop feignts, as he’s banned from doing the move. Tenzan hit a brainbuster. Tana’s side went 3-on-1 against Cobb.

Tana jumped in and O-Khan nailed him with a Dominator. Cobb hit a Tour of the Islands on Kojima. Ospreay hit an Oscutter on Tenzan for the pin.

Winner: The United Empire via Pinfall.

O-Khan cut a quick promo after the match and United Empire stood tall over the fallen trio.

There was a tease of O-Khan trying to recruit Yota Tsuji after the match.

This was a tough ask of these guys in a single and the booking of the match was straight out of Monday Night Raw.

YH got the early advantage by working on Tanga’s left arm. He used a couple of submission attempts and arm wringers. Jado tripped YH from the floor and Tanga used the distraction to take control of the match.

Tanga used a back suplex and some forearm shots. YH came back with a basement dropkick to the left leg. YH hit a couple of chops and a headhunter. Tanga regained control and screamed at YH to fight him. YH hit a powerbomb out of the corner for a two count.

Tanga fought out of a butterfly lock and hit a jumping kick. Tanga hit a spinebuster for a two count. Tanga teased Apesh*t. YH slid out and hit a series of superkicks. Tanga no-sold five superkicks. YH hit a sixth superkick and a backstabber.

YH hit a senton bomb off the top for a two count. He used a gator roll to set up another attempt with the butterfly lock. Jado jumped in with a kendo stick and YH gave up the hold. Tanga accidentally hit Jado. YH used a schoolboy for two.

YH hit a dragon suplex and a meteora. He went for Kharma. Tama Tonga ran down for the distraction. Tanga hit Apesh*t and pinned YH.

G.O.D. went for a Magic Killer on YH after the bell. Goto ran in for the save and the next match began right away.

Tama tried to roll Goto up in seconds, but Goto fought off the pin. They brawled outside. Jado hit Goto with a kendo stick.

Goto made a comeback with a wheel kick in the corner. Goto blocked a superman punch. Tama hit a Tongan Twist for a two count. Tama used a guillotine to set up a DDT. Tama missed a frog splash. Goto hit an elbow to the back of the head.

Jado took the ref. Tanga jumped in and got hit with a Goto headbutt. Goto knocked Jado off the apron. Goto blocked two gun stuns and hit a GTR for the pin.

Terrible match, as you might expect. They didn’t go for all comedy or all serious fight and it went way too long.

They did some comedy brawling with the strap on the outside. Yano’s shirtwas draped over the strap and they played tug-of-war. Owens taped Yano’s hands shut so he wouldn’t be able to remove the corner pads. Owens removed three pads. Both got sent into exposed buckles.

Yano hit a low blow and went for the last pad. Owens blocked and hit a jewel heist. They brawled back to the floor. Owens teased a package piledriver on the exposed arena floor. Yano blocked with a backdrop.

Back inside, Owens went for the last pad. Yano pulled him away and hit a powerbomb, then removed the pad to retain.

Ishii’s whole gimmick is that he doesn’t sell, so they built the match around Ishii selling and it was great.This started slowly, built well and the final sequence was tremendous. These are two of the best wrestlers alive.

White began with his customary stalling. White took the ref and Gedo raked Ishii’s face. Ishii fired back with strikes. White bailed to the ramp to collect himself. White dropped Ishii across the top rope, then dropped him ribs-first onto the barricade. Ishii sold his ribs.

White repeatedly sent Ishii into the ring and the barricade, working on the ribs. White continued to attack the ribs with a bearhug on the mat. Ishii had a brief flurry with a powerslam, chops and a vertical suplex. White came back with strikes to the ribs and a DVD for a near fall.

White fired off some hard chops in the corner. Ishii no-sold the last chop and came back with chops to the throat. White managed a complete shot and a deadlift German.

White stomped away at the ribs. Ishii no-sold a series of strikes and dropped White with a single elbow strike. Ishii sat White on the top rope and hit a jumping headbutt. Ishii hit a superplex for a near fall. Ishii used a sleeper. Gedo jumped on the apron and nailed Ishii in the ribs.

White hit a sleeper suplex at the 20 minute call. White then used his own sleeper. White hit a Regal suplex for a two count. Ishii used a sleeper. White escaped and hit a vertical drop brainbuster. Ishii kicked out of his own finisher. Ishii reversed a Blade Runner attempt into a German and a double down.

White kicked away a lariat. Ishii hit an enzuigiri and a stack cover powerbomb for a near fall. Gedo jumped in the ring. Ishii blocked a low blow from White and sent him into Gedo. Gedo took a bump and rolled outside. Ishii hit a sliding lariat for a near fall.

This was very good. It fell short of a classic Okada main event because of the Bullet Club interference and the ref bump that have been plaguing the company over the last year.

Okada fired off some strikes at the opening bell, then sent EVIL rolling outside to collect himself after a big boot. Togo tripped Okada and EVIL tried to use the distraction to his advantage. Okada survived the attack and hit a slam and a slingshot senton for two.

Okada hit a neckbreaker, then used a chinlock. The fight went to the floor. Togo tried to interfere but the referee stopped him. EVIL used Togo to set a screen and chased Okada back into the ring. EVIL took control and took the match back to the outside.

Togo threw Okada back in. Red Shoes refused to count the pin after Togo’s interference. EVIL got three near falls in quick succession. EVIL missed with a senton. Okada hit a diving uppercut forearm.

Okada hit a running back elbow, a back elbow in the corner and a DDT for a near fall. Okada sent EVIL to the floor with a dropkick. Okada chased Togo up the ramp. EVIL went after them. Okada hit both with a DDT on the ramp.

Back inside, EVIL hit a lariat and a fisherman buster for a two count. Okada got to the ropes as EVIL tried to lock on the Darkness Scorpion. Togo interfered and punched Okada. Okada blocked Darkness Falls and hit a flapjack into a double down at the 15 minute mark.

An intricate series of reversals led to Okada hitting an air raid crash neckbreaker and a shotgun missile dropkick. EVIL hit a lariat and Okada’s neck hit the exposed buckle. EVIL hit a superplex and then got the Scorpion applied. Okada forced a rope break.

EVIL hit Darkness Falls. Okada kicked out at two at the 20 minute call. Okada blocked Everything is EVIL. EVIL blocked the Money Clip. Okada sent EVIL into the exposed buckle and got the Money Clip applied. EVIL raked the eyes to break it.

Togo hit Okada with a chair and jumped in. Okada hit a series of right hands to Togo, then hit a dropkick on EVIL. Okada used the Money Clip. EVIL tried to grab the referee. Red Shoes fought off EVIL’s grip. Okada hit a tombstone.

Okada went back to the Money Clip. EVIL shoved Okada into Red Shoes. Red Shoes took a bump. Okada hit a spinning Rainmaker. Okada used the Money Clip again Togo jumped in with his ligature. Okada fought out of the choke, sending Togo into the exposed buckle. Okada hit a tombstone on Togo.

Okada hit a spinning tombstone. Okada locked on the Money Clip again. Okada applied the hold again in the center of the ring. EVIL forced a rope break.

Okada hit a short Rainmaker. EVIL hit a Rainmaker and a dragon suplex. EVIL hit a lariat. Okada kicked out at the last possible second.

Okada then hit the Rainmaker and got the pin.

Okada cut a promo after the match. He said he wants to get back in the hunt for the IWGP title. He said there’s a proper order of things in life and he knows he has to win the New Japan Cup to make that happen.

Okada said it’s his place to rescue the IWGP title scene and he’ll do that by winning New Japan Cup. He thanked the fans and said he’ll see them tomorrow.