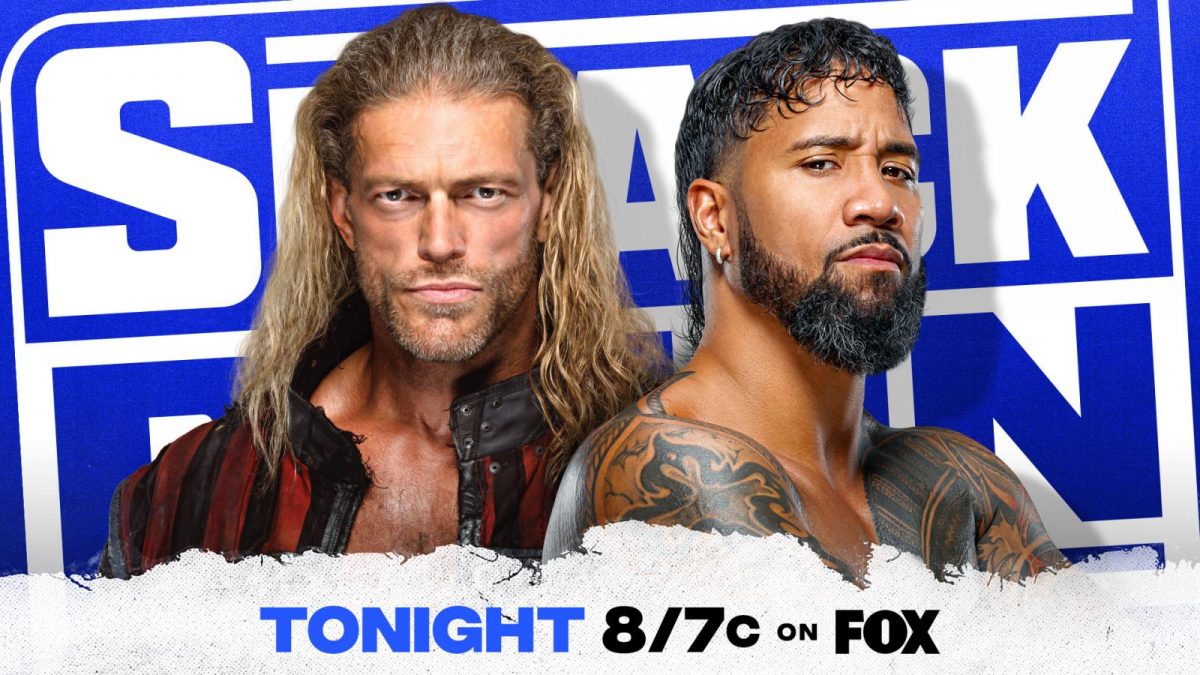 WWE SmackDown kicks off with Bianca Belair and Sasha Banks arguing backstage. Bianca asks her what she’s thinking about taking on Nia Jax tonight. They argue and Bianca tell her that this was a bad decision and she will not go out there to save her.

They state that Reginald is at a spa getting ready for Nia’s Championship celebration tonight.

The bell rings and we are under way. Sasha with a baseball slide takes out Baszler. She gets on the top rope and drives Nia into the second turnbuckle. Sasha stomps on Nia in the corner. Sasha with the double knees onto Nia followed by a bulldog. Sasha goes for the Banks Statement but Nia gets out of it. Sasha runs to the ropes but a back elbow by Nia takes Sasha down.

Sasha rolls to the outside as Bianca checks up on her.

Kayla Braxton is backstage with Edge. She asks him how it feels to be back on SmackDown in a decade. He says this show has always felt like home to him, some of the greatest moments of his career happened here. He defeated The Undertaker for the World Heavyweight Championship on SmackDown. He says it feels surreal but it feels right. He says Bryan deserves a fair chance at Fastlane and if Edge is not out there, Bryan probably won’t.

Shayna and Nia are backstage and Nia is angry at her. Shayna apologizes and Nia tells her she wants to know what she will do about it. Shayna says she will go get a match vs. Bianca and she will kick her head off.

Seth Rollins is in the ring. He says he recently made his return to SmackDown and when he did, the entire locker room surrounded the ring to greet him like a king. He says they came out because they respect him. And when they all turned their backs and walked out on him, he respected their decision to be idiots. But one person took the disrespect too far and that was Cesaro. And he finally figured out why and that is because Cesaro is jealous of him.

Rollins says Cesaro is jealous of him because he is loved everywhere he goes and that he is a WrestleMania main eventer while he is a failure. Seth says he is a fighter, not a failure. You knock him down and he stands right back up. And Cesaro is not the same.

We see a clip from last week where Seth attacked Cesaro during his match vs. Murphy.

Seth tells Cesaro that he swung him around 22 times and Cesaro will never disrespect him or embarrass him like that ever again. Seth calls Cesaro the biggest waste of potential.

The bell rings and we are under way. Dominik and Ford are in the ring. An arm drag by Ford is followed by an arm drag by Dominik. Both men shake hands in the ring but Ford with a kick. Ford goes for a back drop, Dominik lands on his feet and tags Rey in. Rey with a drop kick. He goes for the cover but Ford kicks out. Ford runs to the ropes and Dawkins is tagged in. They double team Rey as Dawkins goes for the cover but Rey kicks out.

Dawkins with a spinning splash into the corner. He tags Ford in but Rey sends Ford into the ropes. Dominik is tagged in. Dawkins gets in the ring. A hurricanrana by Dominik takes Dawkins to the outside. Dominik runs to the ropes but Ford with a clothesline. A back drop by Ford. He goes for the cover but Dominik kicks out. Dawkins is tagged in as The Street Profits try double teaming Dominik but Rey breaks it up as Dominik gets the roll up on Dawkins and gets the pin.

Gable and Otis walk down to the ring after the match. Gable tells them that them getting the win does not mean it gets them a title opportunity before them. Gable and Otis turn their attention to The Street Profits as Rey and Dominik dropkick them to the outside.

Back from commercial, Rey and Gable are in the ring. The Street Profits and the Tag Team Champions are on commentary. Gable goes for a suplex off the top rope but Rey knocks Gable down. Rey with a sit down senton off the top rope. Rey throws Gable down onto the second rope. He lands the 619 and Dominik knocks Otis off the top rope.

Rey on the top rope but Otis trips him up. Otis is tagged in and a bodyslam takes Rey down. Otis stomps on Rey and he slams Rey into the turnbuckle. Otis with a bear hug in the middle of the ring but Rey bites Otis. Rey runs to the ropes but a bodyslam by Otis. He goes for an elbow but Rey moves out of the way and Gable and Dominik are tagged in. Gable with a German suplex. Otis is tagged in. Otis with a flying splash off the second rope. He goes for the cover and gets the pin.

Sami is backstage and he says he’s finalizing his documentary and now he has a match vs. Corbin which he never signed up to. In comes Kevin and he tells Sami he’s not sure if he will be in his documentary. Sami tries to convince Kevin to join his documentary as Kevin asks him if he ever considered that whatever is happening, Sami has been twisting reality to fit his narrative.

Kevin says he’s known Sami for a long time and he never heard Sami say it’s his fault. Sami says he’s not wrong. They have done a lot to him and Kevin as Kevin asks him who they is. Sami tells him to join him on ringside and watch his match vs. Corbin. And if he doesn’t see anything suspicious, he will drop it all. Kevin agrees.

Daniel Bryan is in the ring. Bryan hyped up tonight’s main event. Bryan says if Jey wins, we know what we will get. He will do everything in his power to make sure that Roman wins at FastLae. And if Roman was the Champion he thought he was, he wouldn’t need that help. But Edge is the ultimate opportunist. He will do anything he can to get what he wants and what he wants is to face Roman Reigns one on one at WrestleMania.

Out comes Roman Reigns to the ring along with Paul Heyman. Roman laughs and says Bryan will tap him out. Roman calls Bryan DB and says he can deal with Bryan telling these lies about how he is ambitious but if he is going to lie on the Tribal Chief, that he can’t. He says Bryan can’t tap him out. He says Bryan has a better chance of shooting lightning out of his ass than tapping him out. Roman tells him no one in his entire career has ever tapped him out. He would rather lose his arm than to tap out to any man. And he will rather die in that ring than to tap out to somebody like him.

Bryan says that is pretty strong but make no mistake, he is talking about lies he has told. All those things that Roman says about himself, those are all lies. They are all delusions. And the thing is that everyone thinks they are invincible until they are not. And everyone thinks they are un-tap-out-able until they tap out. Bryan says he won’t just make Roman quit, he is going to break him. He is going to break him of his beliefs, of everything he thinks he is.

Daniel says he hopes Roman doesn’t die but if he taps out or doesn’t tap out, he will beat Roman for the Universal Championship at Fastlane.

Sami tries to undo the top turnbuckle as the referee stops him. Corbin hits him the End of Days. He goes for the cover and gets the pin.

Sami argues with Kevin on the outside and Sami attacks him with a Helluva Kick. Sami tells him he is not crazy but that Kevin is blind.

Backstage, we have Apollo Crews and Big in separate rooms doing an interview. Cole asks them if they think they will ever be able to settle their differences. Big E says that is over. Apollo wants to talk to him about reconciliation? Kumbaya, we are the world. And all he wants to talk about is vengeance. He tells Apollo that he has two days to FastLane and if he were Apolo, he would take those two days and he would appreciate the March air. He would enjoy the normal function of my limbs. And he would take those days and enjoy the present because his near future is dark.

Big E says on Sunday he will retain his Intercontinental Championship and Apollo is going to get everything that he deserves. Apollo says what he deserves. What he deserves. If he were Big E, he would think twice before talking to Nigerian Royalty like that. He says this reminds him of an old Nigerian proverb his great grandfather would tell anybody who dared to threaten him. You fill your mouth with a razor and you will spit blood and that is exactly what is going to happen to Big E at FastLane.

Apollo says he is going to crack Big E’s face and he will see the Nigerian warrior within him. He will finally have what he deserves. All of his ancestors and his family will watch him as he stands over Big E’s body as the new Intercontinental Champion.

Big E says there is no waiting for Sunday as he removes his earpiece and walks away. Big E walks around the stadium looking for Apollo. He drives a golf cart around looking for Apollo as he finally finds him. Apollo tries running away as both men fight. Big E through Apollo into a trash can and into some steel lockers. Big E stomps and beats up on Apollo backstage. WWE officials break it up.

Sasha’s music hits as she makes her way onto the stage. She looks at Bianca and tells her she can do it and walks to the back. The bell rings and we are under way. Bianca runs to the ropes as Shayna trips her up. Right hands by Shayna as she throws Bianca to the outside. Nia looks over to Shayna and walks away. Bianca back in the ring as Shayna is distracted by Nia leaving. She turns around and a spinebuster by Bianca. She goes for the cover but Shayna kicks out. Natalya and Tamina attack Shayna from behind as the referee calls for the bell.

Bianca is thrown to the outside. Natalya and Tamina double team Bianca in the ring.

The winner will be special guest enforcer for WWE Universal Championship match at Fastlane.

Daniel Bryan is on commentary. The bell rings and we are under way. Edge with a take down cover but Jey kicks out. Both men back up and a head lock by Edge but Jey sends him to the ropes and a shoulder block by Edge takes Jey down. Edge goes for a submission but Jey moves out of the way.

A right hand by Edge followed by a knee to the midsection. A knee to the face by Edge takes Jey down. An arm bar by Edge but Jey with an elbow to the body as Edge rolls out of the ring favoring his ribs. Jey follows him to the outside but Jey pushes Edge into the steel steps. Jey gets back in the ring and runs as he lands a suicide dive.

Roman hits Edge with the spear after the match. He tells Bryan to tap him out. Bryan gets up from commentary but Jey attacks him from behind. He throws Bryan into the ring and Roman hits him with the spear.