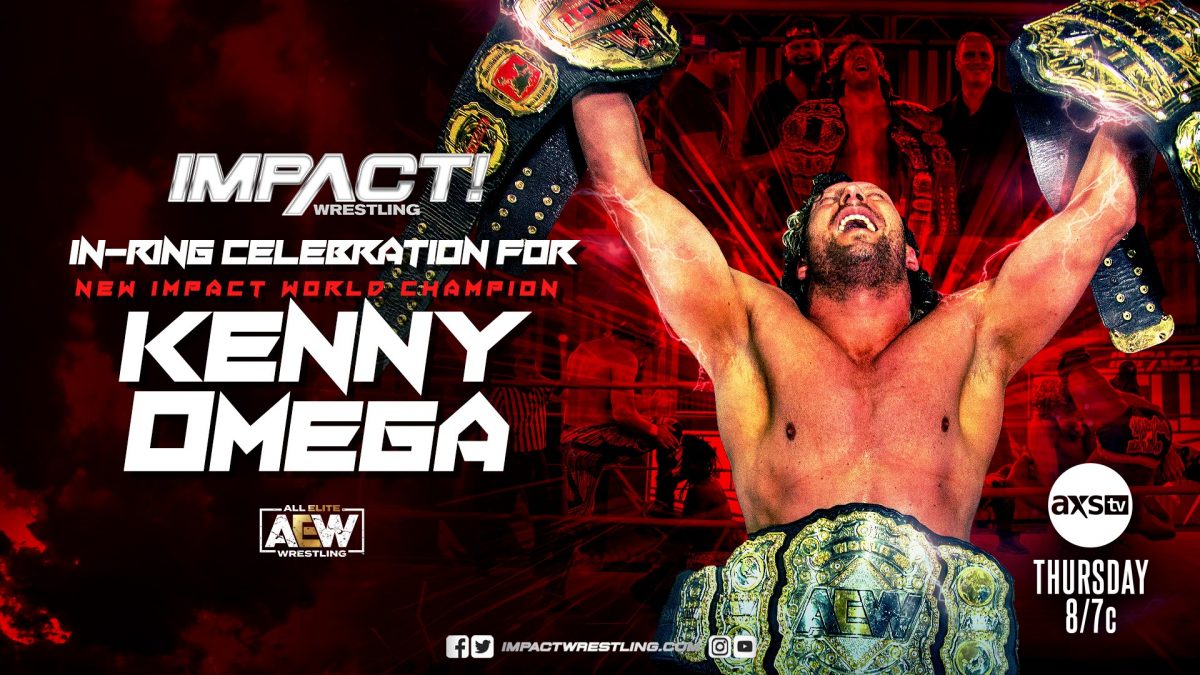 The IMPACT locker room is crowded around Executive Vice President Scott D’Amore’s office and they all want a shot at the new IMPACT World Champion, Kenny Omega. D’Amore tells them to head to the ring because he’s going to address the situation right now. D’Amore tells Don Callis that since Omega is now IMPACT World Champion, he must physically be here every Thursday night. Callis claims that his intention was to hold Omega’s championship celebration via Zoom. D’Amore demands that Omega makes it to the building tonight – or else.

.@ScottDAmore has made it clear – if @KennyOmegamanX isn’t in the building for the celebration tonight, he’s be stripped of the IMPACT World Championship. #IMPACTonAXSTV @TheDonCallis pic.twitter.com/b3T92efy0a

The locker room surrounds the ring inside the IMPACT Zone. D’Amore thanks former IMPACT World Champion Rich Swann for his incredible performance at Rebellion but notes that there was no rematch clause for the Title vs. Title match. D’Amore announces that a new #1 contender will be crowned at Under Siege in a 6-way match, streaming May 15th on IMPACT Plus. But if Kenny Omega doesn’t show up by the time IMPACT! goes off the air tonight, that match will be to crown a new IMPACT World Champion! Qualifying matches will take place over the next two weeks and we’re set to kick off IMPACT! with one right now – Jake Something takes on the returning Chris Bey!

Bey traps him in the ropes, then connects with a flying elbow drop off the second. Bey soars through the air once again, taking Jake off his feet with a flying forearm. Jake hits a double axe-handle to gain momentum, followed by a sit-down powerbomb for two. Bey retreats to the apron but Jake makes him pay for it by launching him back into the ring. Rohit hooks Jake’s leg from the outside. Bey capitalizes by rolling him up with his feet on the ropes to steal the victory.

Don Callis tells Kenny Omega over the phone that he needs to take the private jet and come to the IMPACT Zone right away. Sami Callihan confronts Don and says that Omega won’t know when or where, but he’s coming for what’s his – the IMPACT World Title.

“You won’t know when, you won’t know where but I’m coming for what’s mine.” @TheSamiCallihan had a clear warning for @TheDonCallis and @KennyOmegamanX. #IMPACTonAXSTV pic.twitter.com/0wAAq8st64

Gia Miller interviews Taylor Wilde who made her return to IMPACT this past Sunday at Rebellion, sending a physical message to Knockouts Champion Deonna Purrazzo in the process. Tenille Dashwood and Kaleb With a K interrupt and Tenille is under the impression that Taylor came out of retirement so that they could form a tag team. Taylor clears the air and says the only reason she’s back is to become Knockouts Champion once again.

Next week, the qualifying matches for the 6-way #1 contenders match at Under Siege continue as Trey battles Rohit Raju, Moose takes on James Storm and Rhino collides with Chris Sabin. But there are still two more qualifying matches here tonight – Brian Myers vs. Matt Cardona and Sami Callihan vs. Eddie Edwards!

Just days after W. Morrissey made his shocking IMPACT debut at Rebellion, he returns to the ring for singles action tonight. Morrissey gets on the mic and tells the world that they may know his face, but they have no idea who he really is. Morrissey turns his attention to the Professional Wrestling industry and claims that it’s full of bad people. The only difference between him and them – is that he’s not afraid to admit it.

Morrissey drops the mic and charges into the corner, squashing Beale with a huge splash. Morrissey places Beale on the top turnbuckle and sends him crashing back down the mat with a punt kick. Morrissey makes quick work of his opponent as he connects with a thunderous powerbomb for three.

During an interview with Gia Miller, Knockouts Champion Deonna Purrazzo tells Kimber Lee and Susan to go it alone when Kimber battles Taylor Wilde later tonight. Gia questions her motives but Deonna responds by saying she has defeated every Knockout on the roster. Deonna begins to walk off the set when she’s met head-on by the terrifying force known as Havok.

After W. Morrissey targeted him during their 8-man tag team match at Rebellion, Willie Mack challenges him to a singles match at Under Siege!

Taylor Wilde is set to compete for the first time in over a decade as she officially comes out of retirement tonight. Kimber gains the early advantage with a running dropkick right at the opening bell. Taylor shows off her quickness and athleticism with a series of running clotheslines. Kimber counters a Sharpshooter attempt, then pulls Taylor throat-first into the bottom rope. Kimber distracts the referee while Susan attacks Taylor with her shoe at ringside. Kimber crashes and burns with a top rope Swanton. Taylor capitalizes and locks in a modified Indian Deathlock to win by submission.

After the match, Susan jumps Taylor from behind but Tenille Dashwood makes the save as she takes out Susan with the Spotlight Kick! Despite what Taylor said earlier, it appears as though Tenille is set on forming a tag team with her!

Moose confronts Scott D’Amore about why he has to qualify for the 6-way #1 contenders match at Under Siege. Moose says that he will do whatever it takes to reclaim what he believes is rightfully his.

After Josh Alexander defeated Ace Austin and TJP to become the new X-Division Champion at Rebellion, he has granted the former champ his rematch just a few days later on IMPACT! Josh softens up Ace with a vicious backbreaker. Ace quickens the pace and delivers a flurry of innovative offense, culminating with a running bulldog for two. Ace brings out his laminated playing card and gives Alexander a brutal papercut. Ace hits a springboard Hurricanrana but Alexander comes right back with a Chaos Theory suplex. Ace breaks up an Ankle Lock attempt with an Enzuigiri to the back of the head. Alexander goes for the Divine Intervention on the ring apron but Ace counters by driving him back-first into the steel post. Alexander fights off Fulton at ringside but the distraction allows Ace time to recover. Alexander counters a Divine Intervention attempt from Ace, then locks in the Ankle Lock to win by submission.

Don Callis asks Johnny Swinger to have one of his stooges pick up IMPACT World Champion Kenny Omega from the airport in order to settle their debt. The clock is ticking for Omega to make it to the IMPACT Zone by the end the night, or be stripped of the IMPACT World Title.

After losing the Knockouts Tag Team Championships to Jordynne Grace and Rachael Ellering, Fire ‘N Flava want their rematch at Under Siege!

This is a rematch from last Sunday’s Rebellion PPV where Myers showed no remorse putting away an injured Matt Cardona with the Roster Cut. The former friends brawl on the ramp to kick things off. Cardona is fired up, sending Myers crashing into the steel guardrail with a side Russian legsweep. The bell rings and Myers targets the previously injured knee of Cardona. Cardona throws caution to the wind and hits a sliding dropkick. Every time Cardona tries to get something going, his knee gives out and Myers regains control. Cardona hits Sky High for a near fall. Cardona counters the Roster Cut into Radio Silence for three!

Violent By Design deliver a daunting message ahead of Rhino’s #1 contenders match qualifier against Chris Sabin next week.

NJPW’s El Phantasmo is coming to IMPACT Wrestling next week!

Sami Callihan and Eddie Edwards renew their storied rivalry with the winner earning a spot in the 6-way #1 contenders match at Under Siege. Callihan superkicks him off the top rope, then begins the wear-down process with a vicious headlock. Eddie sends Callihan soaring with a top rope Hurricanrana. It looks as though Eddie is headed to Under Siege after hitting the Blue Thunder Bomb but Callihan kicks out at two. Callihan counters the Boston Knee Party into a pop-up powerbomb.

Out of nowhere, Kenny Omega and The Good Brothers arrive and attack Callihan to cause the disqualification.

The Good Brothers take out both Callihan and Eddie with a pair of Magic Killers. Omega is setting up for the V-Trigger when IMPACT World Tag Team Champions FinJuice hit the ring but fall victim to the numbers game. IMPACT World Champion Kenny Omega, Doc Gallows, Karl Anderson and Don Callis stand tall as IMPACT! goes off the air.