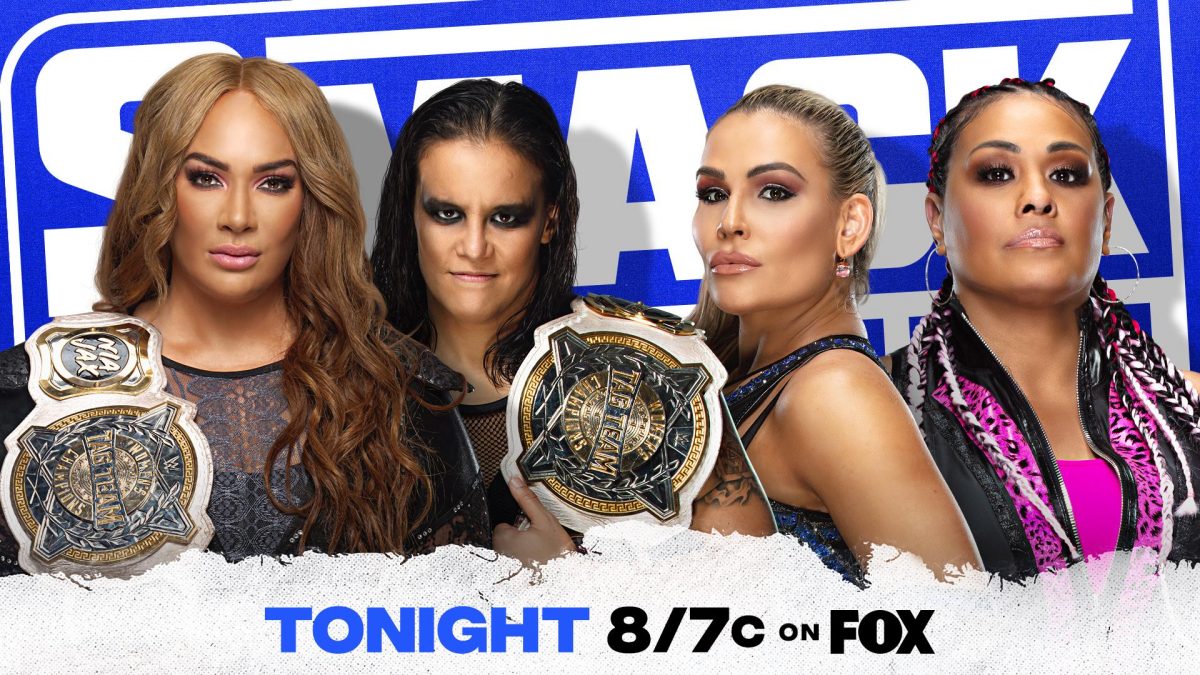 WWE SmackDown kicks off with Jey Uso in the ring. He says they call him the right hand man, main event Jey Uso. Last week, his brother disrespected the head of the table. This week, he leaves them no choice but to handle some family business. With that said, he introduces the head of the table, the tribal chief, the man who will defeat Cesaro at WrestleMania Backlash, his cousin, the Universal Champion, Roman Reigns.

Out comes Roman along with Paul Heyman. All three men stand in the ring. Roman says they have some problems. He looks at Jey and tells him one of them is his brother. And they’ll get to him in a minute but he will talk about Cesaro first. Roman says he likes him, like a lot of the guys, he respects Cesaro. He’s a top tier talent. They could say he’s one of the best wrestlers in the whole world.

Roman tells Paul that he is so much more than just a wrestler. He’s the tribal chief, the head of the table. There’s no way Cesaro can fulfill the roles that he has. There’s no way WWE want Cesaro in his place. SmackDown doesn’t want that. Fox doesn’t want that. Reigns asks how many world heavyweight championship matches has Cesaro had. Heyman says zero and rightfully so. Reigns asks Heyman how many he has had. Heyman says his people are good with numbers and that number is 39.

Reigns looks at Jey and says it was simple. Jimmy got to see how it works. As he is talking, Jimmy’s music hits and out he comes. Jimmy says he is out here and all he can hear is Roman running his mouth while his brother acts like his bitch. Jimmy is wearing a “Nobody’s Bitch” shirt and tells Jey he has one for him in the locker room. And he’s not sure if their boy will make it passed Cesaro.

Jimmy says no but together he and Jey can. If they win the Tag Team Championships and Roman loses his Championship, they would be the head of the table. Roman says that’s now how it works, that’s not their position. He is what he is and they are what they are. He is the tribal chief. Five time WrestleMania main event. He carries the burden of the company, he is the face of the company.

Out comes Cesaro. He says of course, challenge accepted. He tells Roman that he will beat Jimmy tonight and on Sunday he will defeat him for the Universal Championship.

They double teamShayna. Natalya goes for the cover but Reginald is on the ring apron as he distracts the referee and Reginald is kicked out of ringside. On the outside, Nia with a Samoan drop on Tamina onto the barricade. Back in the ring, Natalya is distracted as Shayna hits her with a knee to the face. She goes for the cover but Natalya kicks out.

Tamina climbs the top rope but Shayna up and kicks her. Nia is tagged in. Nia on the second rope, she goes for a suplex but Tamina fights back and she knocks Nia down. Natalya and Shayna are on the outside as Natalya hits her with a German suplex. Natalya gets in the ring as Nia hits her with a Samoan drop. As Nia is on her back, Tamina hits her with a Superfly Splash. She goes for the cover and gets the pin.

Kayla gets in the ring and congratulates them. Natalya says it’s never too late to fight for your dreams and she is proud of Tamina. Natalya gets emotional as Tamina thanks Natalya and says this is for their families. Pyro hits the stage as they celebrate in the ring.

Heyman is walking backstage as he is stopped by Kayla. She asks him about earlier tonight. Heyman tells her to stop. Heyman says he doesn’t know if Jimmy can defeat Cesaro tonight. But what he does know is that Roman Reigns can and will defeat Cesaro on Sunday.

Crews says tonight, everyone will witness a special presentation. Trumpets play in the background. Apollo says time after time his Commander Azeez has helped him. With the help of Azeez, he has restored glory to the Intercontinental Championship and he has brought honor to his home of Nigeria.

Apollo says he may be the Intercontinental Champion for a long time. And so, for the Commander’s act of bravery and loyalty, he presents to him the most distinguished medal, the Nigerian Medal of Honor. Apollo grabs a medal of a glass box and places it around the Commander’s neck.

Big E’s on the big screen. He says what is this. He calls this a joke. He says Apollo still has to feel his power.

Out comes Sami Zayn and he says this is typical Big E. Always making a mockery of everything. Say what you will about Sami but he respects a good award ceremony. Apollo tells him off. Sami says the truth is they have a bit of a bone to pick as he is holding his Intercontinental Championship. And if he is a man of honor, he can give him a chance to reclaim it.

Out comes Kevin Owens. He walks down the stage and chases Sami into the ring. Apollo and Azeez attack Owens in the ring. Out comes Big E as he sends Azeez to the outside. Owens goes for a superkick on Crews but Crews moves out of the way and Kevin hits Big E. Kevin hits Apollo with the super kick. He hits Sami with the super kick. Big E hits Kevin with the Big Ending. He goes to hit Apollo with the Big Ending but Azeez helps Apollo, grabbing him to the outside.

Ziggler slams Rey in the corner. He runs towards Rey but a kick to the face onto Ziggler. Rey with a tornado DDT. Rey on the ring apron and a right hand on Ziggler. Rey on the top rope but a right hand by Ziggler. Both men on the top rope as Ziggler goes for a superplex but Rey blocks it. Rey knocks Ziggler down. Mysterio with a sit down senton. He goes for the cover but Ziggler kicks out.

Ziggler slams Rey down onto the mat. Ziggler lifts Rey up but Rey rolls him up and gets the pin.

Roode goes to attack Rey as Dominik saves Rey. Roode and Ziggler are on the outside as Rey and Dominik celebrate in the ring.

Megan Morant is backstage with Cesaro. She asks him about his match tonight. Cesaro says it means the world to compete for the Universal Championship. Growing up as a kid in Switzerland, a lot of people thought he was crazy. Going to the United States, to the WWE. But he kept thinking he thinks he can. He’s not like Roman, he doesn’t ask people to acknowledge him. He says Jimmy needs to decide if he wants to be Jimmy Uso or like his brother, Roman’s cousin.

And as for Sunday, he knows he can get the win and the WWE Universe will call him the new Universal Champion.

Kayla is backstage with Rey and Dominik. Rey says they are close to making history and he is ready for it. In come Ziggler and Roode. Ziggler tells Dominik that he told him already, he doesn’t belong in the business. Roode says that tonight, Rey got lucky but at Backlash, they will take him out for good. Roode calls Dominik baby Dom as Dominik says they can say what they want but on Sunday, they will call him baby Champ as he and Rey walk away.

Michael Cole is in the ring with Bianca Belair. He says it’s been four weeks since she won the Championship and she will defend it on Sunday against someone who held the title for over a year. Bianca says she is the best and that’s not up for debate because when you shine like she shines, its not up for debate. Bianca asks Cole where Bayley is as we see a clip from last week. We see Bayley attacking Bianca.

Bayley is on screen laughing. Bianca asks her if she likes her hair because she wants to show her her braids. Bayley says she is far away from Bianca. Bayley calls Bianca an idiot if she thought she would be in the ring after she had viciously attacked her last week. Bianca says she is funny, she talks a good game but she better believe that when she gets her hands on Bayley on Sunday, it will be the roughest and quickest victory yet.

Bayley continues to laugh. Bianca tells Bayley she is mad because she was busy getting thrown down the ramp by the Bellas at WrestleMania while she was in the main event. Bayley says when she sees her throwing around her stupid ponytail, it feels like she is looking in the mirror of her own past. And on Sunday, this fairytale of hers will end for good.

Nakamura with forearms and right hands. Corbin runs towards Nakamura but Nakamura ducks and gets an arm bar on Corbin. He turns it into a triangle but Corbin gets to his feet as he lifts Nakamura up, he drops Nakamura down and with the lock still in, Corbin gets the pin.

Corbin throws Nakamura to the outside after the match as he celebrates. Nakamura gets back in the ring and attacks Corbin from behind. He hits Corbin with the Kinshasa. Nakamura grabs Corbin’s crown and wears it.

Sonya and Adam Pearce are backstage and in comes a furious Apollo Crews. He asks Adam what he will do about earlier tonight. Sonya tells him to watch out or else Adam will make him defend his Championship against them all, the same way he did with Roman at WrestleMania. Adam says that’s a good idea as he tells Apollo that he will defend his Intercontinental Championship in a fatal four way next week. Apollo leaves the room as Adam tells Sonya to never undermine him.

Jimmy is backstage with Kayla. He says this isn’t his idea. He always thought his first match back would have been with his brother. But now, it’s Jey doing all of the work for Roman. Reigns even said it himself, he doesn’t need Jey for his success. He says he and his brother will be fine as long as Roman stay out of it.

The bell rings and we are under way. A drop kick by Cesaro takes Jimmy down. Jimmy back up, Cesaro to the ropes and a shoulder block takes Jimmy down. A body slam by Cesaro. He goes for the cover but Jimmy kicks out. Jimmy back up as he fakes an injury to distract Cesaro. He hits Cesaro with a super kick followed by a Samoan drop. He goes for the cover but Cesaro kicks out.

Jimmy rolls to the outside. Cesaro on the ring apron and a cannonball onto Jimmy taking him out. Cesaro with an uppercut as he throws Jimmy back in the ring. Roman Reigns attacks Cesaro from behind as the referee calls for the bell.