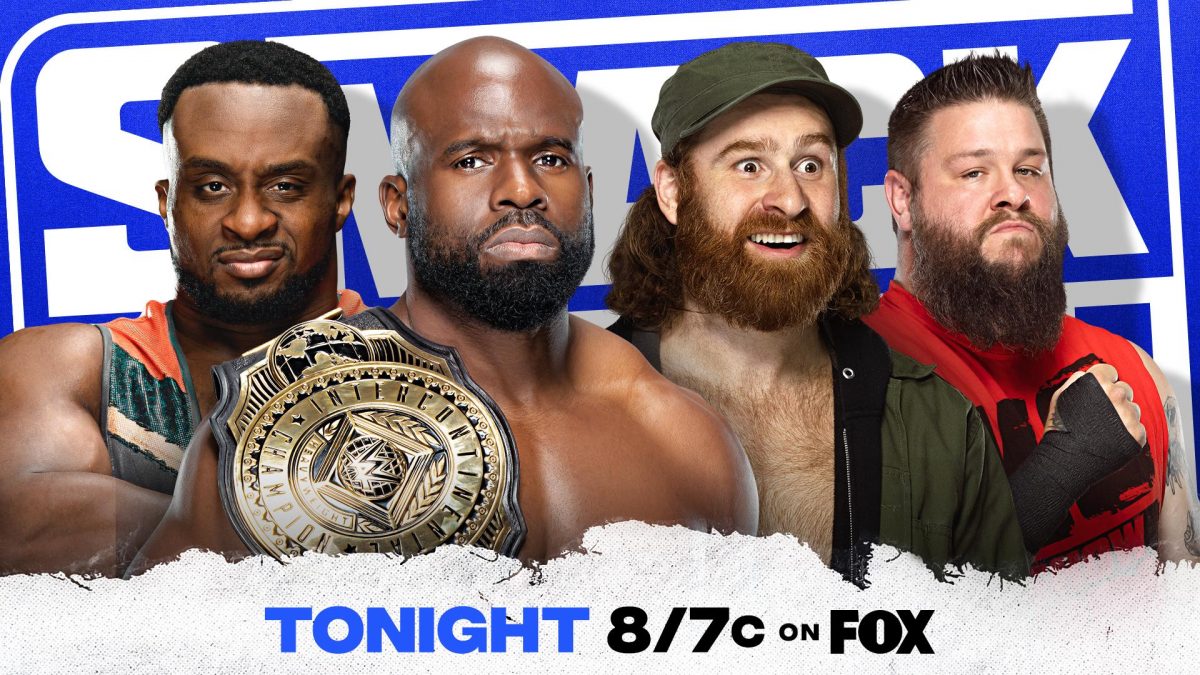 The show kicks off with all the WWE SmackDown Champions on stage, except for Roman Reigns.

Azeez gives a microphone to Crews. He tells Sonya tonight he will not be defending his title. Tonight, in a match where the odds are stacked against him, he will be retaining his title. He will unleash total destruction on Big E, Sami Zayn and Kevin Owens.

Paul says Roman will not be one of many of her parade but there will be a parade of champion later tonight at Roman’s leisure. Heyman thanks them and leaves.

Sonya says that was the first surprise of the night and probably not the last.

Out comes Bayley as she jumps the barricade and gets in the ring. She says she hasn’t even been acknowledged. She held that title for 380 days during the ThunderDome era. She was even a double champion. Bayley says they should be thanking her for putting the company on her back, especially Dominik. She tells Rey he overstayed his welcome. Natalya and Tamina won the titles and cried about them. Apollo and Azeez, she says what’s up.

Bayley calls Bianca the biggest cheater. She uses her ponytail as a weapon. She says Bianca is not a champion, she is a criminal. She tells Sonya that Bianca should be stripped of her title and she should be given the title. Bianca walks down to the ring. Both women are in the ring and Bayley says it’s not time, she will get it when she feels like it. Nia and Shayna attack Bianca from behind. Natalya and Tamina run down to the ring but Nia, Bayley and Shayna are in control.

We come back from commercial and the match is already under way. Nia with an elbow on Tamina. She goes for the cover but Nia kicks out. Nia throws Tamina in the corner and Shayna is tagged in. Right hands by Shayna followed by a snap mare. She goes for the cover but Tamina kicks out. Bayley is tagged in and she stomps on Tamina in the corner. Elbows by Bayley, she goes for a suplex but Tamina reverses it into a suplex of her own.

Back from commercial, Bayley attacking Bianca’s left leg and knocks Natalya off the ring apron. Bayley goes for an elbow but Bianca moves out of the way. Tamina is tagged in. She throws Bayley into the turnbuckle. Tamina knocks Shayna and Nia off the ring apron. A power slam onto Bayley. Natalya is tagged in. A dropkick by Natalya followed by a German suplex. Tamina is back in. They double team Bayley. Tamina goes for the cover but Bayley gets her hand on the rope.

Natalya is tagged back in. She goes for a clothesline, Bayley ducks, Shayna is tagged in and a kick to the face by Shayna onto Natalya. She goes for the cover but Tamina breaks it up. Natalya goes for the sharpshooter but Shayna kicks her away. In comes Bayley but Natalya knocks her down. Nia attacks Natalya as all six women brawl in the ring. Bayley with a Bayley to Belly on Bianca on the outside. Shayna gets the Kirifuda Clutch on Natalya as Natalya taps out.

Kayla is backstage with Big E. She asks him about tonight’s match. Big E tells her that tonight he stands in the ring with dogs, future hall of famers and former World Champions. And he can smile because this is the iron to sharpen his iron. This is the very best to prove that he is among the very best. And when he walks out of the arena, he will leave no doubt that he is the rightful Intercontinental Champion.

A video airs of another dark Aleister Black promo.

King Corbin makes his way down to the ring. He says he was going to come out and not say anything but seeing Nakamura with his crown is the most disrespectful thing he has ever seen. Nakamura may call himself the king of strong style but he is no king. Everyone sitting at home won’t know what it’s like. But a real king wears $40,000 watches, a real kink owns a Ferrari and owns a dog of war. Not a cat. A real king respects a crown. He says he will punish Nakamura and he will take back his crown. He will have it cleaned and polished and put it back where it belongs, on the head of the one true king of WWE. He calls out Nakamura to the ring.

NXT talent Rick Boogs (Eric Bugenhagen) plays a guitar on stage. He tells Corbin he is Rick Boogs and he came to rock with the real king of SmackDown, Shinsuke Nakamura. He plays Nakamura’s theme on guitar as Nakamura comes out wearing the crown.

Boogs plays Nakamura’s theme on the outside which distracts Corbin. Nakamura with the small package as he gets the pin.

Owens is backstage and he says in his first two years in WWE, they called him the prize fighter. Because he kept winning Championships and he will go back to doing just that.

We see clips from Sunday’s Universal Championship match between Roman and Cesaro.

Roman says he believes himself to be a humble man. And he teaches his sons about humility. And to be honest, he doesn’t like to brag on live television so he will take this opportunity to allow his special council to celebrate him.

Paul grabs a microphone and begins to talk. He says this is a unique surprise. He has a moment to acknowledge the tribal chief, undefeated since his return to WWE, scared the Fiend over to Raw, humanized the monster Braun Strowman, baptized his own cousin back into the championship bloodline, KO’d Kevin Owens, scored the most most convincing pin fall in the history of WrestleMania main events when he stacked Edge and Daniel Bryan on top of each other and pinned them both as if it wasn’t a triple threat match but a handicap match vs. the end all to be all.

Roman made sure we will never see Edge again and banished Bryan from SmackDown. And the backlash against the strongest, most talented grappler on the SmackDown roster, Cesaro. Where the champion Roman Reigns beat Cesaro on his own, with no one’s help at Cesaro’s own game. It is a career highlight for him to not only celebrate but acknowledge the preeminent champion in all of WWE and sports entertainment, Roman Reigns.

Heyman says his wish is his command. Roman asks him to bring him his cousin. Paul Heyman tells the time keeper to play Jimmy’s music.

Out comes Cesaro with his arm in a sling. Roman says to cut his music. Cesaro says he was in the back looking for Seth but what he could hear was this annoying yapping in his ear and he realized it was Roman. He tells Roman he would fight him with no arm and he challenges Roman to another match at Hell in a Cell.

After commercials, Seth is backstage and Meagan asks him why he did what he did. Seth says he blacked out as WWE officials have Cesaro on a stretcher. Seth tells him it’s Cesaro’s fault.

Out come Rey and Dominik to the ring. Out come Ziggler and Roode as Roode tells Dominik not to let the win get to his head. His dad did all the work. Roode says tonight this bring your son to work day is over. And he will prove that Dominik doesn’t belong here.

The bell rings and we are under way. Roode gets Dominik in the corner. A suplex. Another suplex. Roode goes for a hard suplex but Dominik reverses it into a small package but Roode kicks out. Roode slams Dominik into the corner. He places Dominik on the top rope. Right hands by Roode but Dominik pushes him down. A cross body by Dominik. He goes for the cover but Roode kicks out.

Jey is walking backstage and he runs into Jimmy. He tells Jey that next week they will tag team against the Street Profits. Jey isn’t happy about it. Jimmy tells Jey that he won the Andre the Giant Memorial Battle Royal without Roman, they won the Tag titles without Roman. Jey tells him he still has to tell Roman about the tag match, he owes him that.

The Street Profits are backstage. They mock Jimmy and Jey and tell them they want the smoke.

“I’m sorry, you are a corporate hack. You are a propagandist.”

Sami Zayn is backstage and in comes Kayla. She calls him the former champion. He tells her he knows what she is doing, she is trying to bring negative thoughts to him by calling him a former champion. He says he will reclaim his Intercontinental Champion tonight and the Champion of the people.

The bell rings and we are under way. Owens with a clothesline on Sami in the corner. Big E attacks Apollo as Sami and Owens fight on the outside of the ring. A back elbow by Big E takes Crews down. In comes Owens who hits him with an atomic drop. Sami attacks Owens from behind. Big E throws Sami onto the ring apron. Big E knocks Apollo down and places him next to Sami on the ring apron. Big E on the ring apron as he lands the big splash. Owens jumps over the top rope onto Big E.

Sami grabs Owens to the outside and throws him into the barricade. He runs towards Owens but Owens throws him over the barricade. Owens on the ring apron but Sami with a back suplex onto Owens. Sami gets in the ring but Big E slams him. Big E hits Crews with the Big Ending. He goes for the cover but Azeez pulls Big E to the outside. He lifts Big E up but Big E pushes him into the ring post.

Big E back in the ring as part of the lights go off. Blue and white smoke fill the screen. Out comes Aleister Black. He gets in the ring, Crews grabs Big E and Black hits him with the Black Mass. Crews goes for the cover and gets the pin.