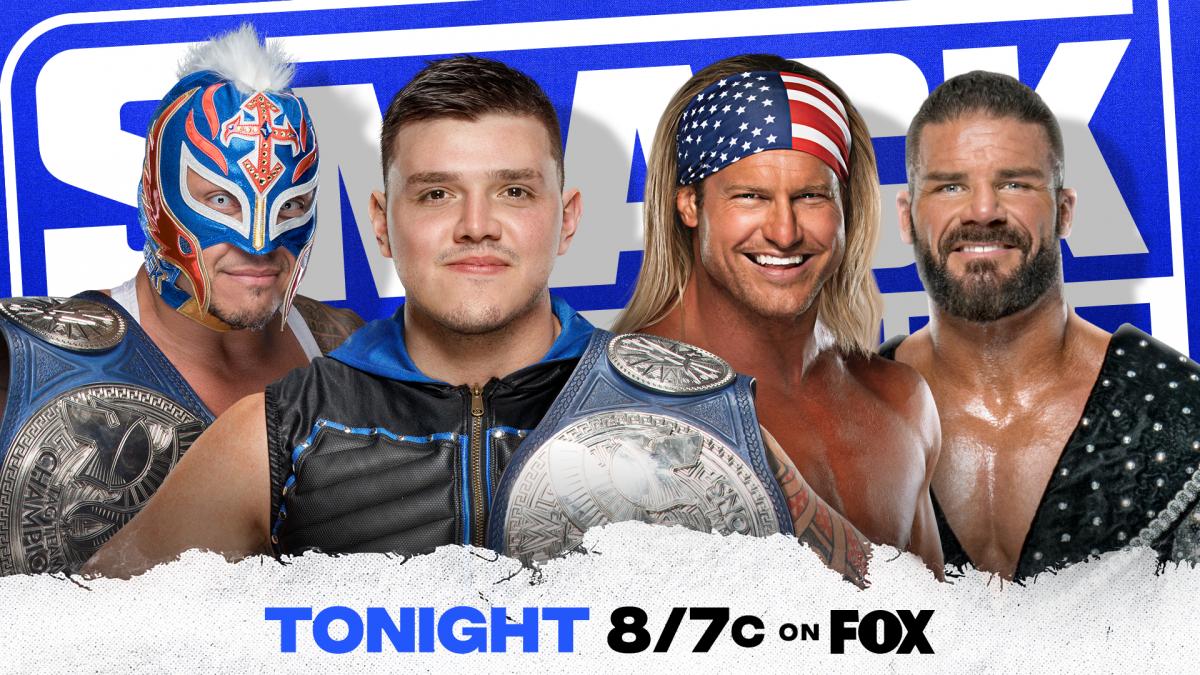 WWE SmackDown kicks off with The Usos backstage hyped for their match. In comes Roman Reigns with Paul Heyman. Roman asks if they feel good and he asks what the game plan is because they’re making all these moves, what’s the end game? Jimmy says the end game is to win. He has the gold, they’ll get the gold and make the family proud. Roman says they have it figured out and he’s happy for them. He wishes them good luck. Jimmy walks away as Roman asks Jimmy what the problem is, if his brother is talking for him now. Jimmy says he’s with Jimmy tonight but he’s with Roman too. Roman tells Jey that maybe he should tell Jimmy that.

The Street Profits vs. The Usos

Out come The Street Profits to the ring. Ford says it’s Friday night in the ThunderDome and all week has had a pep in his step. Because tonight is a night like no other. Tonight is the clash of the titans. It is the Street Profits against The Usos. Ford says when the Street Profits heard that The Usos were challenging the Street Profits, they felt flattered. Because of all the teams in the world, they chose them. Ford says they have been down since day one. But it has been one year since Jimmy came back from his injury. And Jey Uso, Roman lives in his head rent free. Dawkins says Roman will be living in Jimmy’s head too.

The Usos come out and they get in the ring. Ford says it’s The Usos. Jimmy says Ford have jokes. He says the best tag team in the business is back. Jey tells them that standing in front of them is the definition of a true tag team. Back to back tag team of the year. Jey tells them if this is family business. Jimmy says after they get the win tonight, they are one step closer to becoming new Tag Team Champions. Dawkins says they used to run the division but they run it now.

Jimmy sends Dawkins to the ropes but an arm drag by Dawkins and Ford is tagged in. They double team Jimmy. In comes Jey and they clothesline them both to the outside of the ring. They throw Jey into the barricade and Jimmy over the announce table.

Back from commercial, Jey and Ford are in the ring. A right hand by Jey and Ford onto the ring apron. A kick to the side of the face by Ford as he climbs the top rope. He jumps, lands on his feet but a double clothesline and both men are down. Dawkins is tagged in as is Jimmy. Dawkins knocks both the Usos down. He goes for the cover but Jimmy kicks out. Jimmy on the ring apron as he knocks Dawkins down. Jimmy climbs the top rope but a right hand by Dawkins slows him down. Ford runs, flies over the turnbuckle onto the outside on Jey.

Meagan Morant is backstage with Ziggler and Roode. She asks about the Mysterios winning the titles. Roode says their Backlash strategy wasn’t great. Ziggler says he saw Dominik struggling and he somehow saved him. But tonight, they’re back to the drawing board and it will be different. They are aces, dirty dawgs and they will once again become SmackDown Tag Team Champions as Ziggler and Roode walk away.

Back from commercial and the match is under way. Ruby and Liv double team Natalya in the corner. Liv is tagged in. They double team Natalya slamming her in the second turnbuckle. Liv goes for the cover but Natalya kicks out. Ruby is tagged back in and a head lock. Michael Cole announces that Tamina was attacked before the start of the match and she’s not on the ring apron.

Double knees to the face by Liv on the outside. Tamina with the Superfly Splash off the top rope on Riott. She goes for the cover and gets the pin.

“Whoever wins tonight, we want them NEXT WEEK.”@ScrapDaddyAP makes it official, The @WWEUsos will battle for tag team gold NEXT WEEK on #SmackDown! pic.twitter.com/hmhAExdQ47

The Usos enter Adam Pearce’s office. Jimmy tells Adam that they want the winners of tonight’s Tag Team Championship match next week. Jimmy is hyped as he leaves the room while Jey doesn’t look as happy.

Carmella is backstage with Kayla. She tells Kayla that she won Money in the Bank twice and she is a former SmackDown Women’s Champion. Bianca’s story might read like a fairy tale but she will end her happily ever after.

Out comes Bayley before the start of the match. She grabs a chair and sits next to Michael Cole.

The bell rings and we are under way. Carmella with a head scissor take down on Bianca taking her to the outside. Carmella runs towards Bianca but Bianca knocks Carmella down. Bianca gorilla presses Carmella and throws her in the ring. Bianca grabs Carmella by the leg but Carmella with a cheap shop. She slams Bianca face first onto the ring apron. She goes for the cover but Bianca kicks out.

Meagan is backstage with Rey and Dominik Mysterio. Rey says they have a game plan. When Dom gets hurt, he gets hurt. Dominik says their motivation in unmatched. There is no way they will lose tonight and there is no tag team in the world that can top them.

We see a clip of last week’s SmackDown where Seth attacked Cesaro.

Seth says that was difficult to watch but his team has obtained some exclusive audio from Cesaro’s hospital room. He plays the audio as we hear a man grunting in pain. Seth begins to laugh. But in all seriousness, what happened to Cesaro last week should not have happened. He got angry, blacked out and when he came to, he was hovering over Cesaro who was on a stretcher. And while Cesaro deserves part of the blame, life is not black and white. He is a man of integrity. He is a man of responsibility and the truth is that they have to place some of the blame on the WWE Universe.

Rollins says the fans are the ones who brainwashed Cesaro into believing that Cesaro can look right through him. That he deserved opportunities that he didn’t earn. And if Cesaro never steps foot in the ring ever again, the blame is on Cesaro and the WWE Universe.

The bell rings and we are under way. Owens takes Crews down and he hits him with a cannonball. Owens on the top rope and a swanton. He goes for the cover but Apollo kicks out. Apollo on the ring apron as Owens goes for a suplex but Apollo blocks it. Apollo hangs him up on the top rope.

Crews climbs the top rope but a right hand by Owens. Apollo knocks him down. Apollo jumps and lands on his feet as Owens hits him with a super kick. He geos for the pop up powerbomb, Apollo leapfrogs but Owens hits him with the stunner. He goes for the cover but Commander Azeez breaks it up as the referee calls for the ball.

We cut backstage as Jey sits next to Roman as Roman tells him that they have a match next week. He asks Jey if that is what he wants to do. And why didn’t he tell Jimmy that they were together. What happened to we. Roman tells him to think about everything they went through the past few months. And all he ever wanted was the best for him, their family.

Roman says he is main event Jey Uso and to think about it. When they go according to hos plan, what happens, he owns SmackDown. As soon as his brother comes back, he is relegated to the opening match. Roman says he does not want Jey to go back to a place where people look at him and say which one are you again.

Jey says he never thought about it like that. Roman says maybe he should because his brother isn’t.

Rick Boogs is on stage playing the guitar as he introduces Shinsuke Nakamura.

Before the bell rings, Otis knocks Nakamura down. The bell rings and we are under way. A belly to back suplex by Gable. He goes for the cover but Nakamura kicks out. Nakamura runs to the ropes and a kick knocks Gable down. A right hand by Nakamura and kicks knock him down. Nakamura knocks Otis off the ring apron. Gable gets Nakamura ties up between the ropes.

Gable climbs the top rope, he goes for the moonsault but lands on his feet. Nakamura with a kick knocking him down.

Out comes Corbin who takes his crown back. In the ring, Nakamura with the Kinshasa. He goes for the cover and gets the pin.

Corbin is on the ring apron with his crown. Rick Boogs attacks Corbin from behind as Nakamura grabs the crown back.

Kevin Owens is backstage with a doctor and Adam Pearce. He tells Adam to get him a match vs. Apollo. Adam tells him next week he will have his Intercontinental Championship match with Azeez banned from ringside.

We come back from commercial and Rey is down holding his ribs as WWE officials and Dominik check up on him.

Robert Roode and Dolph Ziggler are in the ring watching and asking what happened. Ziggler says they had nothing to do with that, this is the main event of SmackDown. They want a fair fight. Roode says but if Rey can’t fight and Dominik doesn’t come out, they forfeit and win the titles.

Ziggler says Rey got injured and that is heart breaking. But that’s not their fault and Dominik isn’t going to fight them and they ask the referee if they win the titles.

Dominik is backstage and he tells Adam Pearce that Rey stepped up for him at Backlash and he will step up tonight. Ziggler says this is child abuse. Out comes Dominik for the match.

Roode tags Ziggler back in. He stomps on Dominik. Ziggler tags Roode back in and they double team Dominik. Roode with a chop to the chest. Roode sends Dominik to the ropes but a back elbow by Roode takes Dominik down. Ziggler is tagged in and a neck breaker. He goes for the cover but Dominik kicks out. Ziggler grabs Dominik but Dominik knocks Ziggler down. He throws Ziggler to the outside and Dominik flies over the top rope onto Roode and Ziggler.

Roode is tagged in and they double team Dominik. Roode goes for the cover but Dominik kicks out. Out comes Rey Mysterio to the ring holding his ribs. Roode is distracted as Dominik rolls him up and gets the pin.

Out come the Usos after the match. Roman is backstage with Heyman watching them.