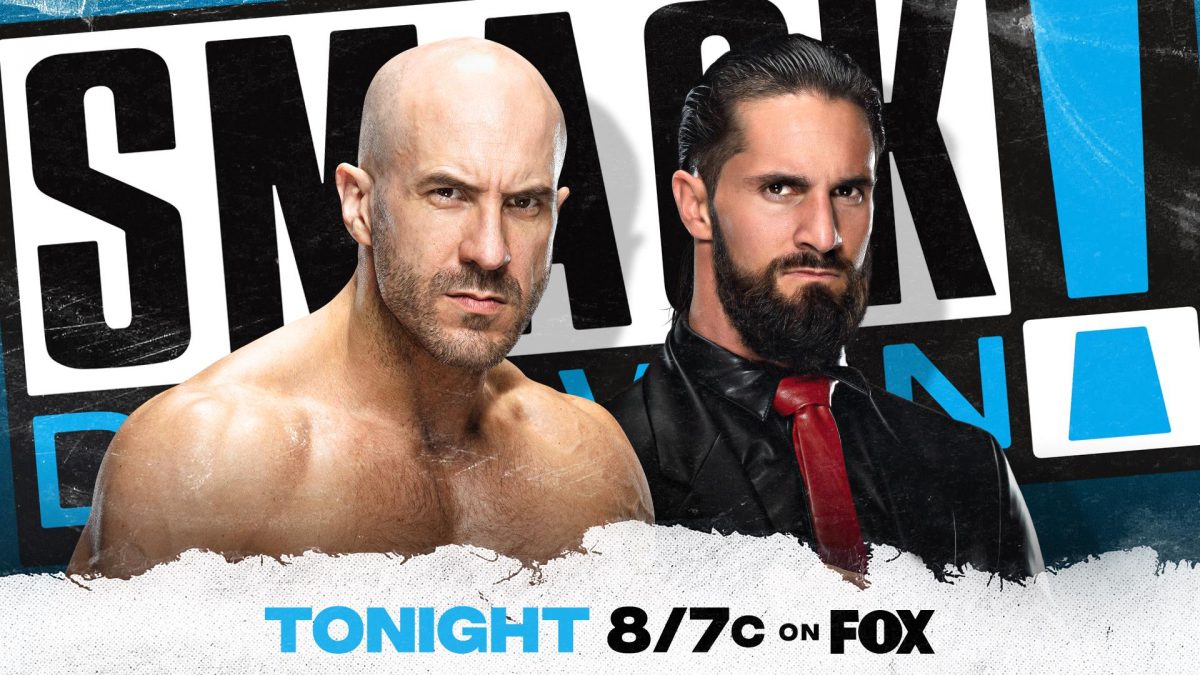 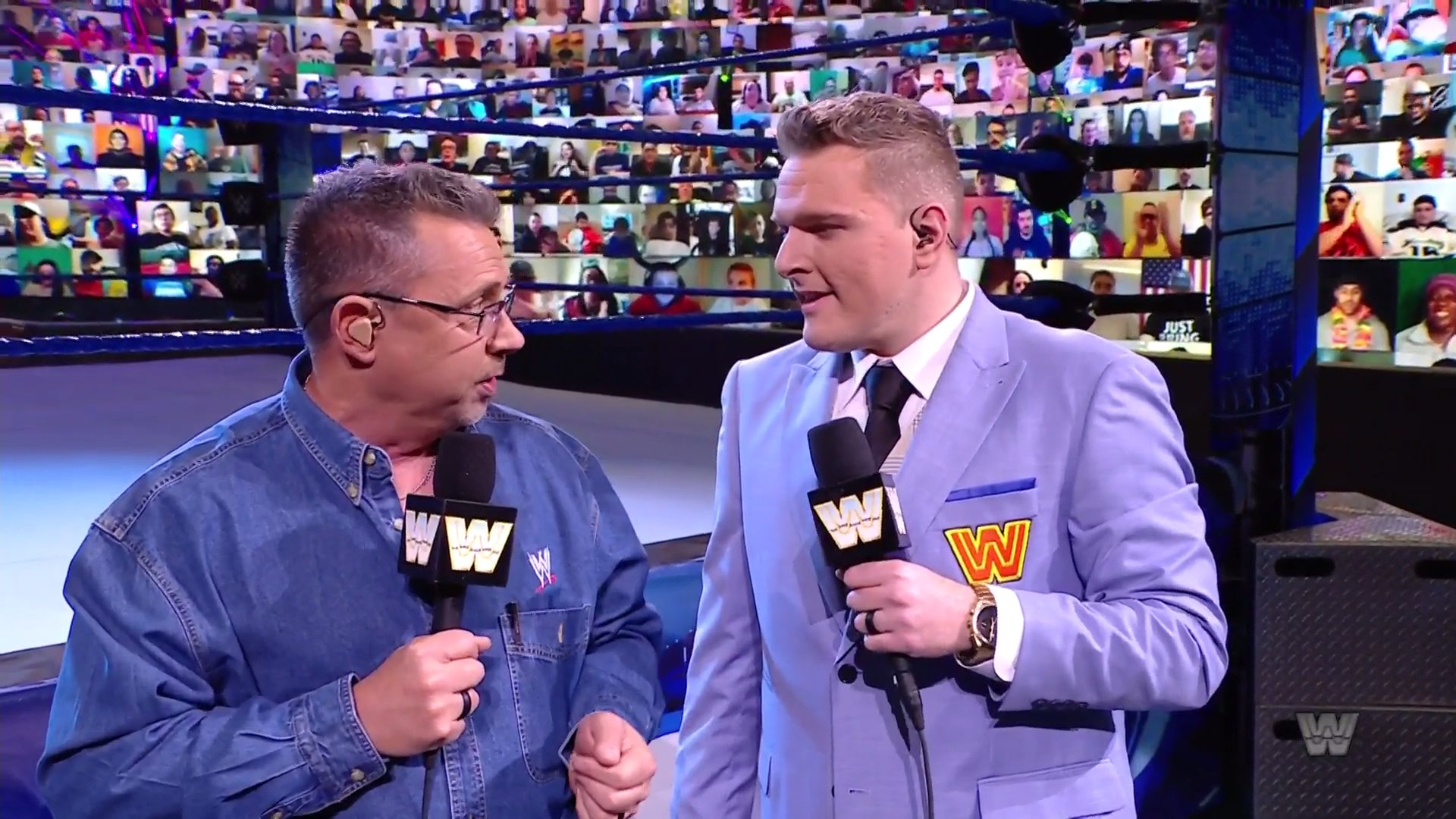 Who doesn’t love a good throwback?

A special retro video intro package airs for SmackDown. We cut to the ThunderDome and it’s the old look WWE logo and set. Michael Cole is dressed as his old self, denim top and all while Pat McAfee is dressed in an old school blue suit.

We see a clip of the first ever main event from SmackDown. It was The Rock vs. Triple H on August 26, 1999 with Shawn Michaels as the special referee.

Out comes Roman Reigns to the ring accompanied by Jey Uso and Paul Heyman. A clip of last week’s main event is shown where Roman got the win vs. Daniel Bryan and Cesaro came out to try and help.

Heyman says that the tribal chief has asked him to eulogize the career of his victim, Daniel Bryan. Heyman says they shall do that with a 10 bell salute. Heyman tells the timekeeper they’ll do it themselves as he says ding 10 times. He hands the microphone over to Reigns.

Roman says he is a man of his word, he did what he said he was going to do. He put everything on his back and he carried it. And because of that, they should acknowledge him. They should celebrate him, thank him because he always gives the people what they want. He gives Fox what they want, SmackDown, he even gave Daniel Bryan what he wanted. Bryan didn’t want to be here, so he smashed him, pinned him and got rid of him.

Reigns says if Bryan wanted to be here, all he had to do was acknowledge him. And he couldn’t so he got rid of him. And with his absence, he got replaced. They replaced him with someone who will acknowledge him.

Roman looks on stage and out comes Jimmy Uso!

All four men are in the ring and out comes Cesaro. He tells them to hold on. Cesaro says he heard Roman say that he replaced Daniel Bryan. But you can never replace Daniel Bryan but he doesn’t have time for him tonight. Cesaro tells Roman he has his match vs. Seth to focus on. Seth attacks Cesaro from behind. Both men brawl on the outside of the ring as WWE officials break it up.

Out comes Teddy Long! He says with the power that has been granted to him by WWE official Adam Pearce, he now proclaims Cesaro, if he beats Seth, he will get his championship match at WrestleMania Backlash!

If Cesaro wins, he gets a WWE Universal Championship match at WrestleMania Backlash.

Cesaro goes for a gut wrench but Seth lands on his feet and hits Cesaro with a buckle bomb but Cesaro comes back and hits him with a clothesline. Both men slowly get back up and Cesaro is thrown to the outside of the ring. Jimmy distracts the referee as Jey tries to get involved and Seth tells him to stay away. Seth throws Cesaro back into the ring.

Jey grabs Seth as Rollins pushes him away. With the referee distracted, Jimmy hits Seth with a superkick. Cesaro flies to the outside and takes Jimmy down. Cesaro throws Seth back in the ring and hits him with the Neutralizer. He goes for the cover and gets the pin. 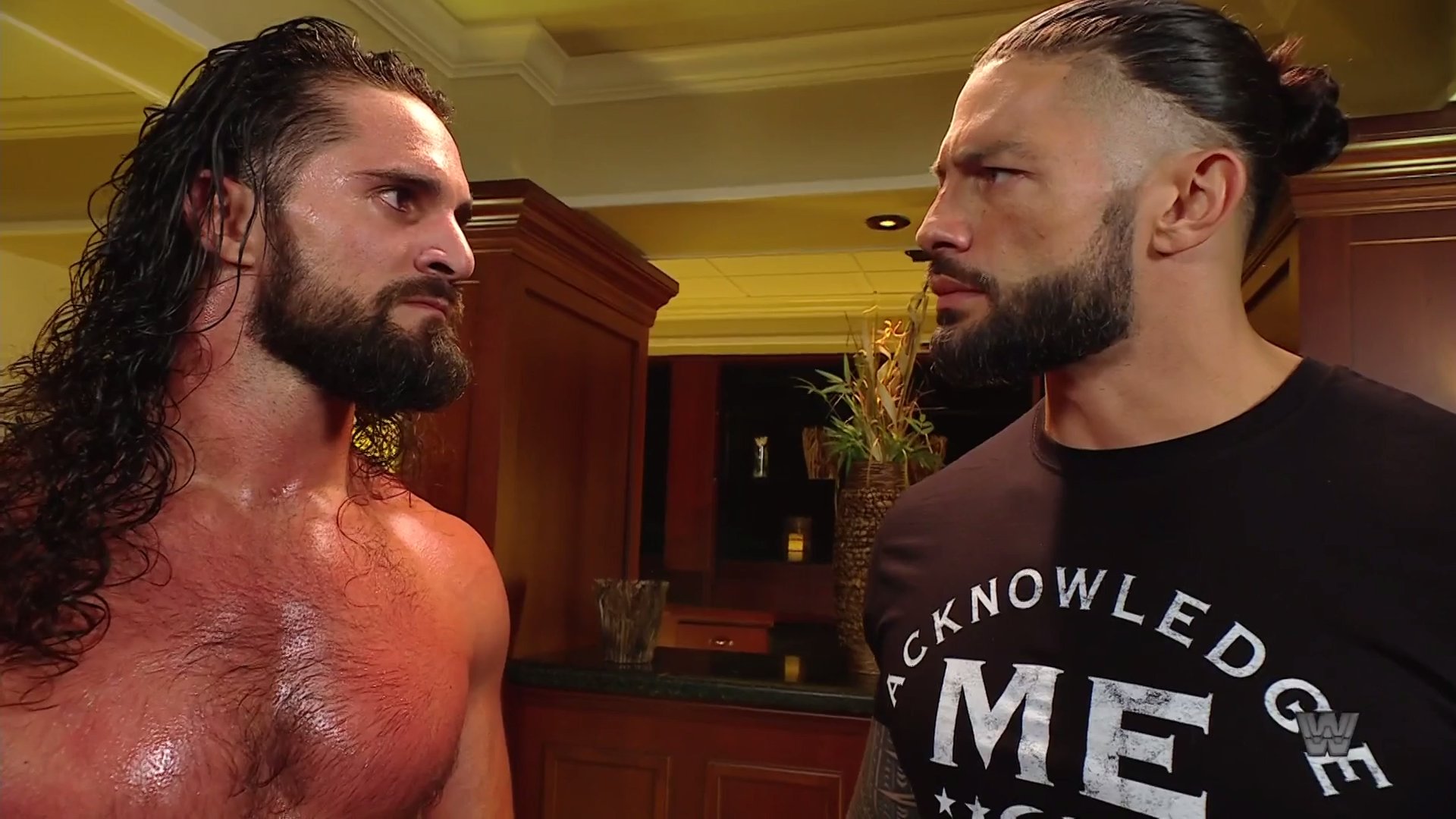 Seth is backstage with Roman. He tells Reigns that they have a history together but he wants to know who he has to be pissed at. Roman or Jey. Reigns tells him he understands his anger but Seth also got involved with himself because now he has to take on Cesaro. And as for his family, he will take care of it. Seth tells him he better, if not he will.

We see a clip from SmackDown dating back to December 13, 2001. It’s the supermarket fight between Steve Austin and Booker T.

Teddy Long is backstage with Sonya Deville. He tells her it was a great stipulation for tonight. Sonya says when she knew she was going to work with him tonight, she got his back.

In comes Sami Zayn. He says it’s great to see him. He tells Teddy that there is a massive conspiracy against him and there is a documentary coming out. Zayn says since he is unbiased, maybe he can give him a match for his Intercontinental Championship tonight. Teddy Long says tonight, he will go one on one with The Undertaker. They all laugh. He says he will be in a tag team match with Apollo Crews. Sami says he doesn’t want to team with Crews.

Long tells him he will need all the help vs. Kevin Owens, Big E, The Street Profits and Shinsuke Nakamura in a 10 man tag team match. Otis, Chad Gable and King Booker! Sonya says it’s actually King Corbin. Teddy asks him to dance like him as they start to dance. 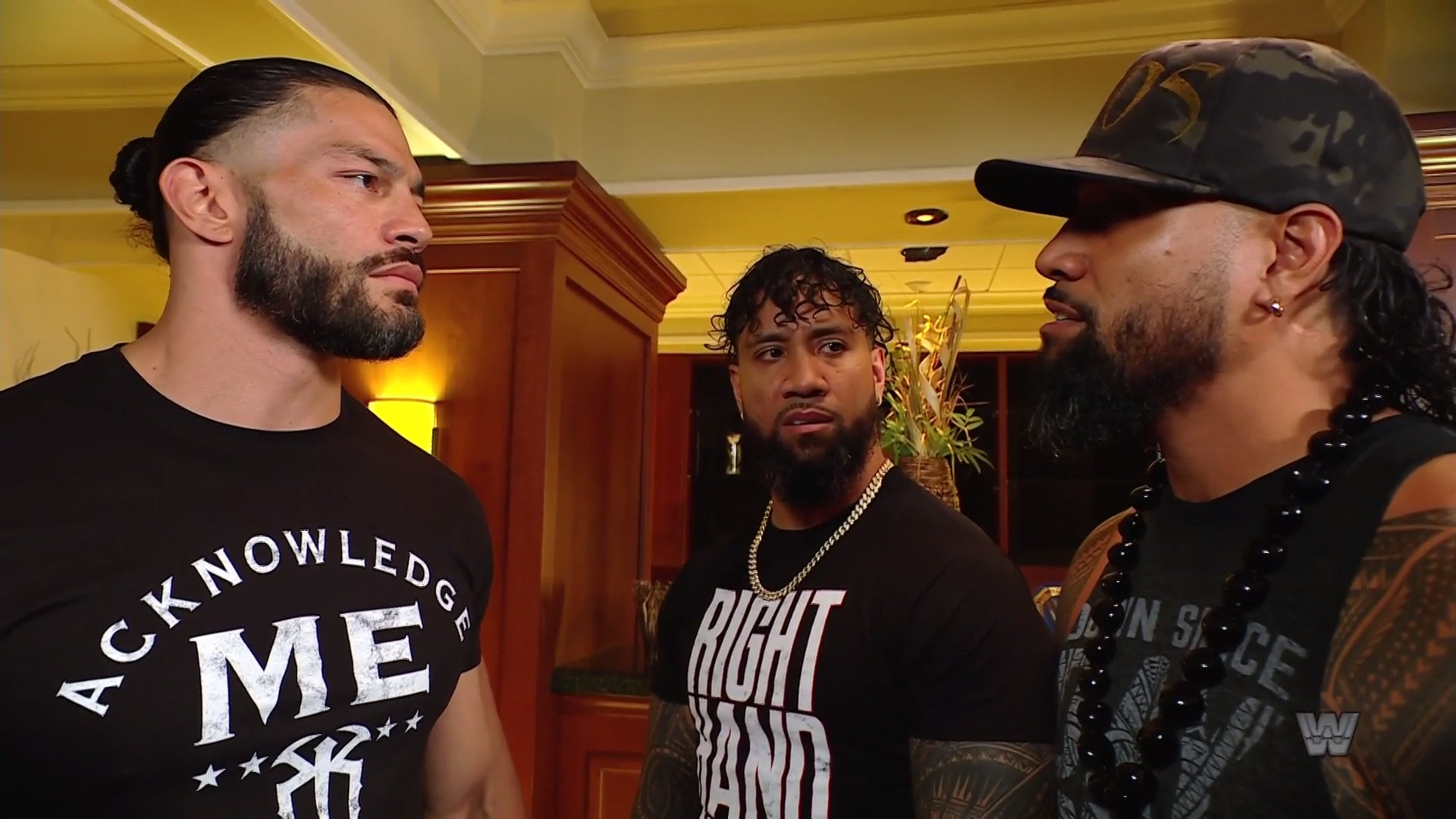 Roman is sitting and in come The Usos. He tells Jimmy he has been here for one hour, he puts the spotlight on him and look what happens. He messes it up. Roman says now he has to clean up his mess and treat him like a baby. But he is making mistakes. Jimmy tells him he won’t talk to him the way he talks to Jey. And he’s nobody’s bitch as Jimmy walks away.

The bell rings and we are under way. A shoulder block by Ruby takes Carmella down. Ruby goes for a suplex but Carmella reverses it and slams Ruby down. Carmella throws Ruby into the corner but Ruby grabs Carmella and throws her face first into the turnbuckle. Ruby with a leg sweep. She goes for the cover but Carmella kicks out.

We cut to July 4, 2002 where Edge and Hulk Hogan won the WWE Tag Team Championships.

A clip of June 12, 2003 where Brock Lesnar landed a suplex off the second rope on Big Show and the ring imploded.

Bayley says just because you are a superstar, it doesn’t mean you’re a great Champion. And she’s the longest reigning SmackDown Women’s Champion, she would know. But she’s here to pay tribute to some of her fellow Women’s Champions. She talks about Alundra Blayze. Jacqueline, Lita, Trish Stratus, Ivory, Beth Phoenix, Molly Holly and Bianca Belair.

She talks about Bianca and calls her naive. She calls her blind to the world. And if she doesn’t watch out, she will end up like all the other women. Not on Bayley’s level. She says at WrestleMania Backlash, she will beat Bianca.

Out comes Bianca and they brawl. It leads to Bayley knocking Bianca down and she tells Bianca to listen to her. 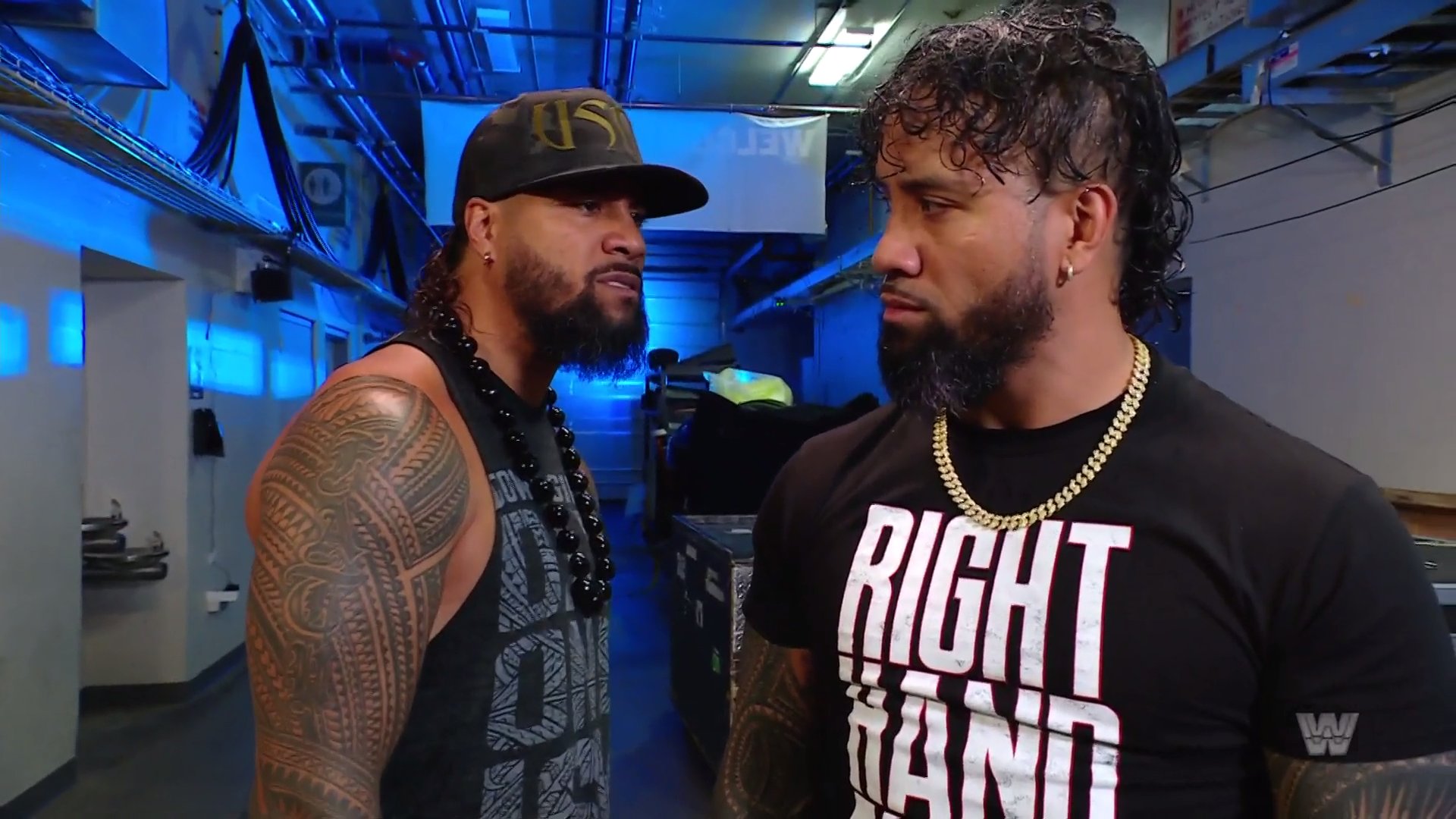 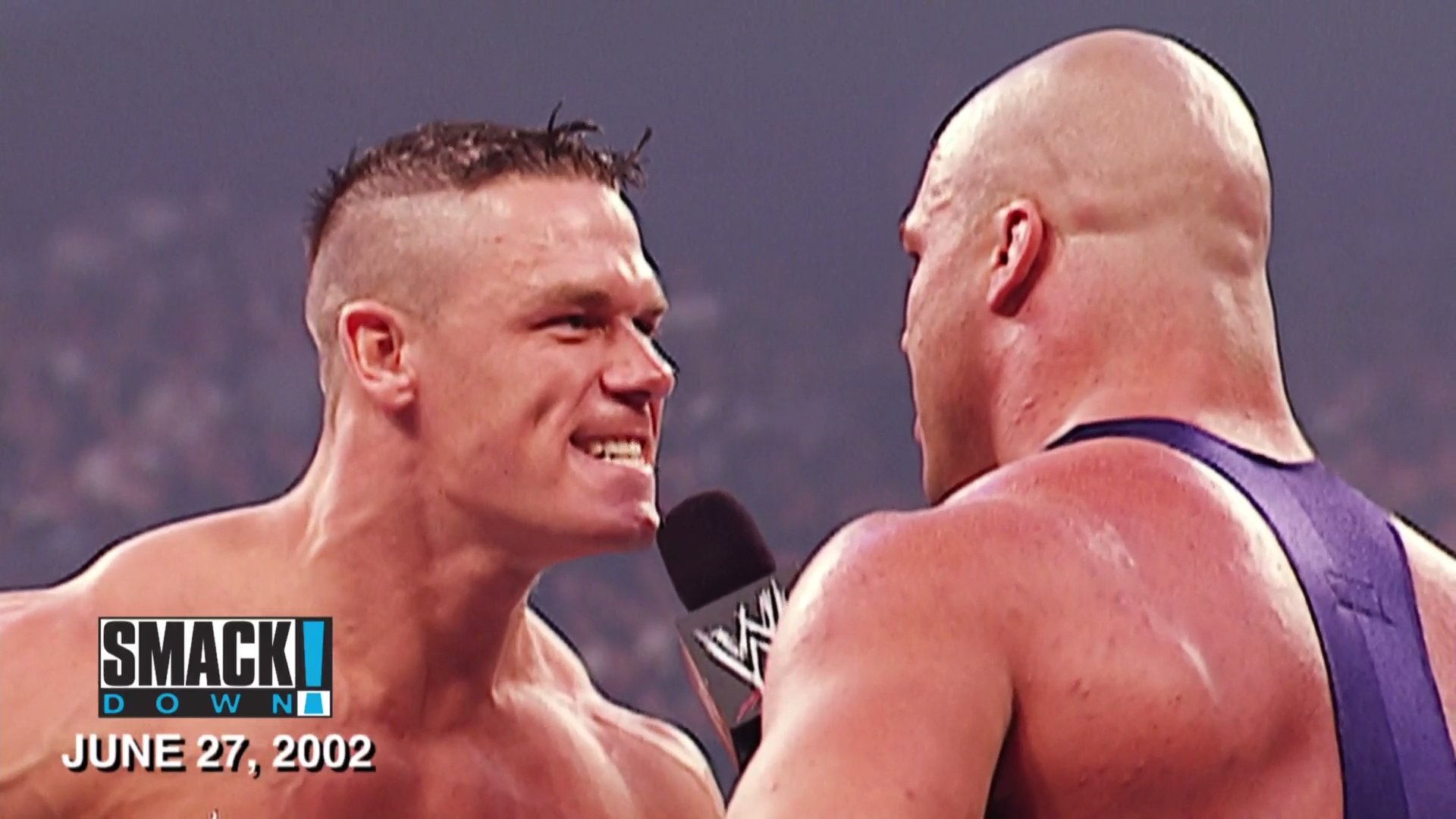 This was originally scheduled to be Rey Mysterio vs. Ziggler.

Ziggler says this is throwback SmackDown and there’s no better throwback’s than them. He says they could be hero’s in any era. He and Rey can go toe to toe all night but Dominik doesn’t belong here. At least some of the Kardashians got popular due to something.

Dolph tells Dominik he doesn’t belong here. He is nothing but Rey’s little kid. He tells Dominik to get out of his ring so that the men can handle their business. Dominik tells Rey he wants the match.

Kayla is backstage with Reginald, Shayna and Nia. She asks Reginald why he has requested this match vs. Tamina. He says Tamina left him with a sour taste in his mouth. But this i the best tag team in the world. And next week, they will break Tamina and Natalya when they defend their titles. But tonight, he will break Tamina’s spirit and after, he will drink spirit to cleanse his mouth. Nia Jax calls Kayla Hilary from the Fresh Prince of Bel-air.

The bell rings and we are under way. Reginald takes off his jacket. Tamina goes for the super kick as Reginald does a back flip and rolls to the outside. He gets in the ring as she goes for two more super kick but he acrobatically moves out of the way.

Tamina Grabs Reginald by his hair and he flips, landing on his feet. He tries to slide under Tamina’s legs but she grabs him. She throws Reginald in the corner. He climbs the top rope and gets on the ring post. She climbs the second rope as he flips off. Tamina hits him with the superkick as he’s dancing. Tamina climbs the top rope but Nia grabs Reginald to the outside and Shayna knocks Tamina down as the referee calls for the bell.

Apollo Crews is backstage with Commander Azeez, King Corbin, the Alpha Academy and Sami Zayn. Crews cuts a promo about how they will win tonight.

The Street Profits are backstage with Big E, Shinsuke Nakamura and Kevin Owens. Big E cuts a promo about how they will win tonight.

A body slam by Apollo. Sami tags himself in. Right hands onto Ford. Right hands by Sami but a drop kick by Ford. An arm bar by Ford and Big E is tagged in. Corbin is tagged in. A head lock by Big E but Corbin out of it and a clothesline by Corbin takes out Big E. Corbin to the ropes and a back elbow by Big E. He goes for the cover but Corbin kicks out.

Corbin throws Big E in the corner and all 10 men get involved. The fight breaks to the outside. Owens with the frog splash off the ring apron onto Sami.

Back from commercial, Otis and Kevin Owens are in the ring. A big splash by Otis onto Owens in the corner. Apollo is tagged in. Crews runs to the ropes but an atomic drop by Owens followed by a kick to the head. Gable takes Big E off the ring apron as Otis knocks Big E down on the outside. A spinning heel kick by Owens. Nakamura and Sami are tagged in. Nakamura knocks him down and he knocks Corbin off the ring apron.

Roman is backstage. He tells Jey that he has given him a lot of responsibility lately. And they do it for their family. He tells Jey he loves him and he loves Jimmy. And that’s why he wants to give him the same opportunities to rise to the occasion.

Reigns tells him he needs to know where Jimmy stands and they are about to find out right now. He tells Jey to go with him.

Roman Reigns is in the ring with Jey and Heyman. He says this is not how he thought tonight would go.

Out comes Jimmy Uso. He asks Jey where does he stand. When he was at home, he saw them fight in an I Quit match until Roman put him in a guillotine and knocked him out. And Jey said he quits for him. He didn’t want to see him get hurt. We see a clip of the Hell in a Cell PPV from October. Jimmy tells Roman he would have never said he quits to him, no matter what.

Roman says this is what it’s about. He is stuck on the past. He and his brother moved forward, he won’t go back and forth with him. It’s simple. Fall in line, stand with them and acknowledge him. Or he can take his ass home. Roman tells him when he leaves, he will have to explain to his kids why he is at home with them, watching the Tribal Chief and the Uso.

Jimmy leaves the ring. Jey follows him and tells him it’ll be easy, to just acknowledge him.