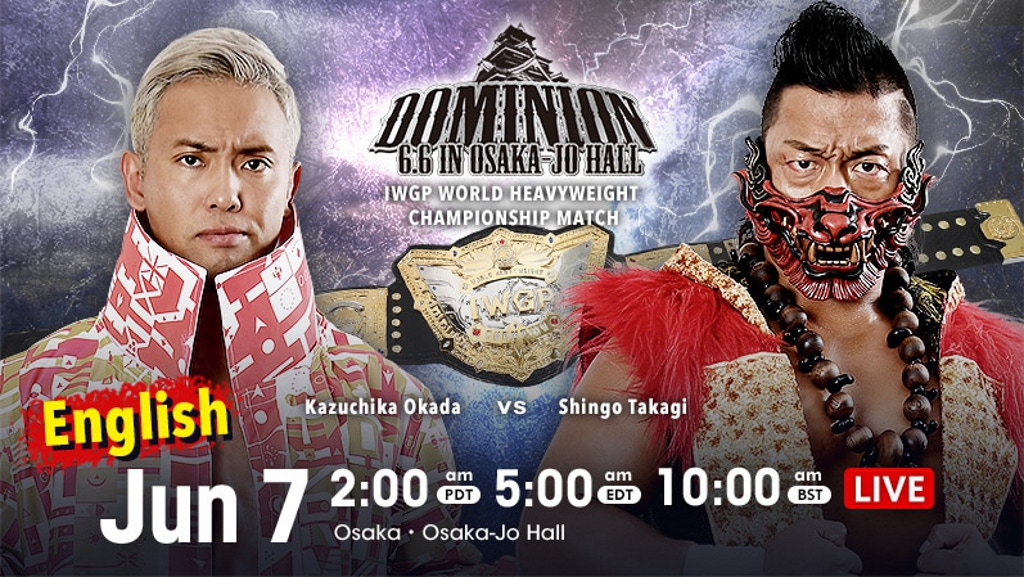 Hiromu Takahashi opened the show with a promo. He said he’s recovering well from his injury and will challenge for the IWGP Junior Heavyweight Championship soon.

He then previewed the card and rallied the crowd.

This was a solid opener that really could have used a few more minutes.

Tanahashi and Owens began. Owens mocked Tana’s air guitar. Tana hit a second rope crossbody. Ishimori tried to interfere from the apron, but SHO jumped in to even things out. Bullet Club turned this into a brawl around ringside and gained the upper hand.

YOSHI-HASHI ended up the legal man and cut off in Bullet Club’s corner. YH made a comeback on EVIL, then tagged Ishii. Goto and SHO jumped in for some spots, including a double spear from SHO on ELP and Ishimori. Togo distracted Ishii and EVIL hit a fisherman buster for a near fall.

SHO and Ishimori tagged in for the closing sequence. Everyone jumped in for a big move. Tana hit Ishimori with slingblade. Ishimori and ELP doubled up on SHO and got a near fall. EVIL took the ref, Togo choked Ishii. Ishimori hit SHO with a Bloody Cross and pinned him.

Bullet Club continued attacking after the bell. EVIL, Yujiro and Togo went after Goto, Ishii and YH, so that looks to be a NEVER Six-Man Tag title match for the next tour.

It looks as though they’re positioning Naito and SANADA as the next challengers for Taichi and Sabre’s IWGP Heavyweight Tag titles. Naito and Taichi began here. Naito shot for a single-leg takedown on the referee. Things turned serious and Sabre and SANADA jumped in. They did a couple of cool four-way spots.

Suzuki-gun turned this into a brawl around ringside. DOUKI choked BUSHI with his steel pipe on the floor. DOUKI and BUSHI ended up the legal men. BUSHI was beaten down, then managed a DDT.

Taichi and Naito tagged back in. Naito hit a neckbreaker and his Tranquilo pose. SANADA tagged in for a double hip toss and a sliding dropkick to Taichi for a two count. Taichi hit an axe bomber, then tagged Sabre.

Sabre tried to turn a SANADA O’Connor roll into a European clutch. SANADA blocked, then trapped Sabre’s shoulders and pinned him.

Naito, SANADA, Taichi and Sabre had a long staredown after the match and taunted each other.

This was very good. Both guys are super workers. The psychology was simple work a body part, but sound.

They opened with some chain wrestling. Neither man got a clear advantage over the other. YOH reversed a whip and hit a dropkick, sending Desperado outside. Desperado pulled YOH to the floor and whipped him into the barricade to take control of the bout.

Desperado grabbed a bucket from under the ring and threw it inside to distract the referee. Desperado then used a chair on YOH’s left leg. Back in the ring, Desperado continued to target the left leg. Desperado hit a splash to the leg for a near fall.

YOH hit a sunset flip for a hope spot near fall. Desperado came back with an Indian deathlock, but YOH forced a rope break. YOH tried a suplex, but his leg gave way. YOH hit a series of back elbows and a flying forearm.

YOH began to target Desperado’s right leg. He used an inverted figure four. Desperado forced a rope break. YOH hit a dropkick to the right leg. Desperado reversed a whip and hit a spinebuster. He went for Numero Dos. He got the hold, but YOH quickly made the ropes.

Desperado hit a stiff forearm shot, but YOH refused to go down. Desperado hit a back suplex and a vertical suplex for a near fall. YOH escaped a Guitarra de Angel, but sold his leg on landing. They fought to the floor. YOH hit a shotgun dropkick into the barricade.

YOH hit a plancha and a tope con giro. YOH threw Desperado back in after a countout tease. YOH hit a missile dropkick and a falcon arrow for a two count. Desperado came back with a dragon screw in the corner.

They traded forearms, then traded kicks to their respective bad legs. YOH hit a flatliner. Desperado hit an Angle slam and Guitarra de Angel for a near fall at the 20 minute call.

Desperado went for Pinche Loco. YOH blocked with a jumping knee. YOH reversed Numero Dos into a cradle for a two count, then slapped on his Stargazer submission hold. YOH rolled through and blocked one rope break, but Desperado crawled back to the ropes to force the break.

Desperado then hit Pinche Loco and got the pin to retain the title.

SHO came to the ring to tend to YOH. El Phantasmo and Taiji Ishimori ran in. ELP said they’l be challenging SHO and YOH for the Junior Tag titles on the Kizuna Road tour.

Ishimori then addressed Desperado and said it’s now his time to challenge him for the Junior Heavyweight title. Desperado accepted the challenge.

This was a great match. These guys have super chemistry and I’d like to see this again.

They didn’t touch for nearly the first full minute. After posturing, Ibushi landed a dropkick. Ibushi tried to land some strikes, but Cobb covered up. Cobb used a double-leg takedown and hit some strikes from Ibushi’s guard.

Ibushi rolled outside, but Cobb went out after him to keep the pressure on. Cobb hit some heavy strikes on the floor. Cobb powered Ibushi up and posted his lower back. Back inside, Cobb hit a headbutt, then went back after Ibushi’s back.

Ibushi came back with a flying mid kick. Cobb quickly cut him off again and used a variety of strikes. Cobb continued to target Ibushi’s back with knees, then stood on Ibushi’s back. Ibushi hit a kick from his back on the mat, but Cobb stayed on the attack with power strikes.

Ibushi sent Cobb to the floor. He went for a plancha, but Cobb caught him. Ibushi fought Cobb off and made it back to the apron, then hit an Asai moonsault from the top rope to the floor. Cobb made it back in after a countout tease.

Ibushi tried for a German off the second rope, but Cobb blocked. They fought on the top rope. Ibushi hit a reverse rana off the top for a two count. Ibushi hit a bomaye for another near fall.

Ibushi called for the Kamigoye. Cobb blocked and hit a release overhead belly-to-belly for a double down. Cobb hit a running uppercut and a back suplex for a near fall. Cobb powered Ibushi up for an F-5 and a near fall.

Ibushi turned a Tour of the Islands into a lateral press for a two count. Cobb went for a pop-up powerbomb. Ibushi blocked and hit a knee strike on his way down, then hit another Kamigoye for the pin.

This was everything you would expect. Shingo especially was incredible in this match. Okada may have been battling his wind a bit in his first singles match back after battling COVID, but he was great as well. Shingo’s selling and facial expressions were on another level throughout the match.

They opened with some mat wrestling. Both worked hammerlocks on the mat. Shingo missed on a senton attempt. Okada tried a senton, but Shingo got his knees up. Okada sold his back on landing and that became the story of the match.

They fought on the outside. Shingo got the upper hand and threw Okada back in. Shingo used a body scissors on the mat and continued to go after the back. Okada tried to end it quickly with a tombstone, but Shingo escaped and hit a powerslam.

Okada made a comeback. He ducked a lariat and hit a running back elbow and a DDT. Okada went for the air raid crash neckbreaker, but Shingo blocked and drove his elbow into Okada’s back. Shingo went to the top rope, but Okada hit a dropkick and sent him crashing to the floor.

Okada hit a draping DDT off the barricade. Back inside, Okada hit heavy rain and went for the Money Clip. Shingo quickly forced a rope break. Okada hit a slam. He teased a missile dropkick, but Shingo popped up. Okada rolled through and ran into a lariat.

Okada got the Money Clip again. Shingo elbowed out. Okada tried a backslide, but Shingo turned it into Noshigami. Shingo hit a wheel barrow German into the corner pad. Shingo used a torture rack, then hit two gutbusters. Shingo hit a massive corner clothesline Okada fired up and hit a shotgun dropkick.

Shingo rolled outside. Okada fought for a tombstone on the floor, but Shingo blocked by grabbing the barricade. Shingo hit Made in Japan on the floor. Both made it in after a double countout tease. Shingo hit a corner lariat and a stay dream for a close near fall. Shingo hit a series of strikes, then ran off the ropes into an Okada dropkick at the 30 minute call.

Shingo hit a pumping bomber for a great near fall at the 35 minute call. They reversed each other’s finishers, then Shingo hit a dragon suplex. Shingo hit a diving forearm strike.

Shingo hit Last of the Dragon and got the pin to win the title.

Shingo cut a promo after the match. He said he lost to Will Ospreay when he challenged for this title, but his heart was still beating. He said that this is only the start of what he has planned. Shingo said we’re still going through a lot, but he’s here to inspire us and bring us energy.

Shingo called out Ibushi and challenged him. Ibushi accepted. No date was announced for the match.

Confetti fell on the ring as the show closed.