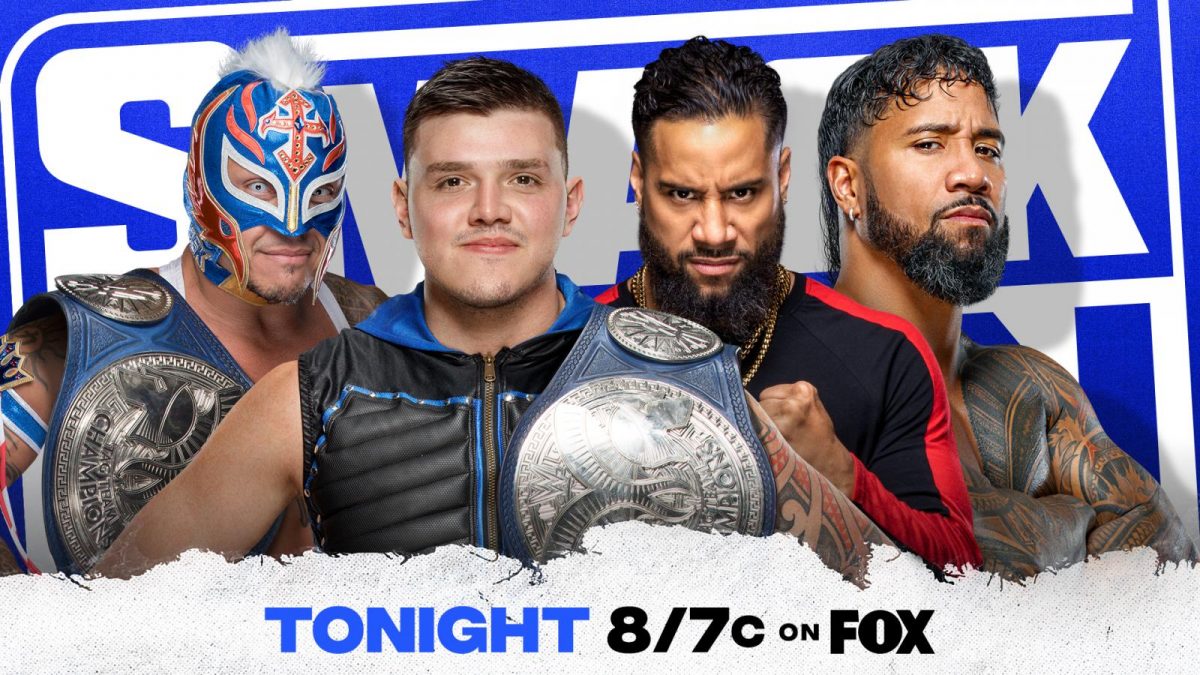 WWE SmackDown kicks off with Roman Reigns and Paul Heyman making their way down to the ring. Roman says he believes in being direct in how he is feeling. By the end of last Friday, he was not happy. But having a full week to think about it, he has changed his position on this tag team championship opportunity that his cousins The Usos have.

Roman says it’s not secret he is the centerpiece and it all revolves around him but he allowed this to happen. But to be clear, Jimmy, he said it last week and he is probably feeling it now. But if he says he is going to win, he better win. Roman says not to waste anymore time, there’s a lot on his place and he has things he has to do. He calls Heyman Wise Man and asks him to get him his cousins. Heyman turns to the timekeeper and tells him to play their music.

Out come The Usos. Jey hugs Roman as Roman tells Jimmy it’s his turn to acknowledge him. Jimmy says he already did at Hell in a Cell but tonight is about being 7 time Tag Team Champions. It’s about making the whole family proud, they are going to be new champions. Roman tells them good luck, they called the shots, he gets that but he gets the job done. If they say they’re going to win, to make sure they win. Roman says their whole family is watching and to get the job done. He tells them to bring him the titles when it’s over.

The bell rings and we are under way. Dominik and Jimmy Uso start off the match. A shoulder block by Jimmy takes Dominik down. Jimmy runs to the ropes but Dominik with a drop kick followed by an arm drag. Rey tagged into the match. They double team Jimmy. Rey goes for the cover but Jimmy kicks out. Right hands by Rey as Jey is tagged in and they double team Rey. Jey goes for the cover but Rey kicks out.

They go for the super kick on Dominik but Dominik moves out of the way. The Usos run towards Dominik but Dominik lowers the top rope and the Usos to the outside. Rey knocks Jey down but Jimmy knocks Rey down. Back in the ring, Dominik trips Jimmy onto the second rope. He goes for the 619 but Jimmy hits him with the super kick. Jimmy climbs the top rope, he goes for the splash but Dominik gets his knees up. He rolls Jimmy up and gets the pin but in controversial fashion as Jimmy’s shoulder was up.

We cut backstage and Roman Reigns is furious. He tells Heyman to bring them to him now.

Roman is backstage with The Usos. He tells them that they lost to a child and worst of all, they called their shots and didn’t win. Roman says the only thing they are lucky about is that there is still time left on the show. They better go to Adam Pearce, Sonya Deville, it doesn’t matter who because he wants this fixed tonight. But before they go, he wants them to understand his position. They are six time Tag Team Champions who made the WrestleMania show once. And in less than a year with him, Jey closed the show, walked out with his head held high with him. He asks Jimmy if he understands his position but he looks at Jey while saying that. Jey tells him he is Jey as Roman laughs. Roman says with the way things are going, does it matter anyways.

Kayla is backstage with Seth Rollins. She asks him about his attack on Cesaro from a few weeks ago. Kayla calls Cesaro resilient as he cuts her off. Seth says that he doesn’t owe her or the WWE Universe anything. Not his time or an answer to her leading question. Kayla says that is true but everyone knows Cesaro refuses to back down and she asks him what will happen when Cesaro returns to SmackDown. Seth takes the microphone off and hands it over to Kayla.

The Street Profits are backstage and in comes Chad Gable. He says he has been watching them lately and it is obvious that profits are down. He says Montez has lost at least 6 inches off that frog splash. He tells them that they need professional management from an Olympian. He asks them if he can get the smoke. They tell him no as they laugh and walk away.

The Mysterios are backstage with their luggage. Adam and Sonya tell them that they have reviewed the footage and the referee made a mistake. And after reviewing it, they deserve another opportunity. They will defend their titles again tonight. They accept.

Out comes WWE SmackDown Women’s Champion Bianca Belair. She says ever since she beat Sasha Banks and won the title, Bayley has been pressed. But she’s done nothing about it. All she has done is laugh. But most of the WWE Universe is not laughing with her but they are laughing at her. Bianca says that laugh is getting to her which is actually funny because Bayley is not the first person to ever try her.

Bianca says people have been trying to keep her down since she was 3 feet tall. People try to make her second guess herself or she would hear people say Bianca is doing too much. She says she left everyone behind and she won trophy after trophy, championship after championship. Bianca says she has dealt with the doubter and bullies but she never had anyone laugh in her face. She says that is utter disrespect and she is not standing for that. She challenges Bayley to a match at Hell in a Cell and Bayley won’t be laughing.

Bayley’s laugh is heard throughout the arena as she shows up on the Titan Tron. She tells Bianca the world does not revolve around her. She has been laughing at people like her her entire life. And she is here via satellite. Bayley says this is her oasis as she is sitting on a couch surrounded by pictures of herself. She says Bianca wants to give her a rematch, she accepts. And after she beats her, she will be laughing but she won’t be the only one laughing. Bayley begins to laugh. The LED boards in the Thunderdome show Bayley laughing.

The Street Profits are backstage and in comes Otis. He says Chad was trying to help him but they mocked him. Ford says Gable is holding him back. He asks Otis what he has accomplished since he aligned himself with him. He tells Otis he should check out of the academy and get his money back. Otis knocks them both down and walks away.

King Corbin is in the ring and out comes Ric Boogs playing the guitar. He introduces Shinsuke Nakamura to the ring as he plays Shinsuke’s song on guitar.

Nakamura tries to throw Corbin into the corner but Corbin slides to the outside, hits Rick with a clothesline. He gets in the ring, slams Nakamura and gets the roll up pin with a handful of tights.

As Corbin grabs his crown and he is about to leave, Rick trips him up and Nakamura knocks him down. Nakamura wears the crown as Rick plays the guitar.

Kevin Owens is backstage as Commander Azeez attacks him. He throws television equipment on him as WWE officials break it up.

Commander Azeez is banned from ringside.

The bell rings and we are under way. Owens in pain from the attack and a bodyslam by Crews. He stomps on Owens and attacks him in the corner. Crews with a snap suplex. He goes for the cover but Owens kicks out. Crews attacks Kevin’s ribs. A running knee to the ribs by Crews takes Owens down. Crews slams Owens into the turnbuckle. Crews runs towards Owens but Owens throws him to the outside.

Owens runs to the ropes but slows down because of his ribs. Owens on the ring apron as Crews trips him up. Crews hits him with an Olympic slam on the outside of the ring.

Back from commercial, Crews attacking the ribs of Owens. An overhead throw by Crews. He gets Owens up and right hands by Crews followed by another overhead throw. Apollo with a release German suplex. He goes for the cover but Owens kicks out. Crews goes for another German but Owens reverses it and a German suplex by Kevin Owens. Both men are down. Forearms by Kevin Owens but Crews throws him in the corner. Apollo places Kevin Owens on the top rope. He goes for a suplex but Owens blocks it. RIght hands by Owens as he knocks Crews down.

Sami Zayn runs down to the ring and hits Owens with the Helluva kick.

The Street Profits are backstage as they cut a promo talking about The Alpha Academy.

The bell rings and we are under way. Dominik is in the ring with Jimmy as Jimmy knocks him down. He goes for the cover but again Dominik kicks out. A chop to the chest by Jimmy and Jey is tagged in. They double team Dominik. Jet with a body slam. He goes for the cover but Dominik kicks out. Dominik rolls to the outside. Jey with a suicide dive onto the outside.

Back from commercial, Jey and Dominik are in the ring. Jey goes for the cover but Dominik kicks out. A head lock by Jey in the middle of the ring. Dominik with right hands but Jey knocks Dominik down. He goes to send Dominik into the corner but Dominik reverses it and Jey lands face first on the turnbuckle.

Jimmy and Rey are tagged in. Rey knocks Jey off the ring apron. Right hands and kicks by Rey followed by a springboard forearm. He goes for the cover but Jimmy kicks out. He sends Jimmy to the ropes and Jey is tagged in. Rey throws Jimmy to the outside and knocks Jey down. A slide by Rey onto Jimmy on the outside. Jimmy back in the ring and Rey throws Jey into the turnbuckle. Rey trips Jimmy up. He goes for the 619 and lands it.

Dominik is tagged in as he climbs the top rope but in comes Roman Reigns who hits him with a Superman punch and the referee calls for the bell.