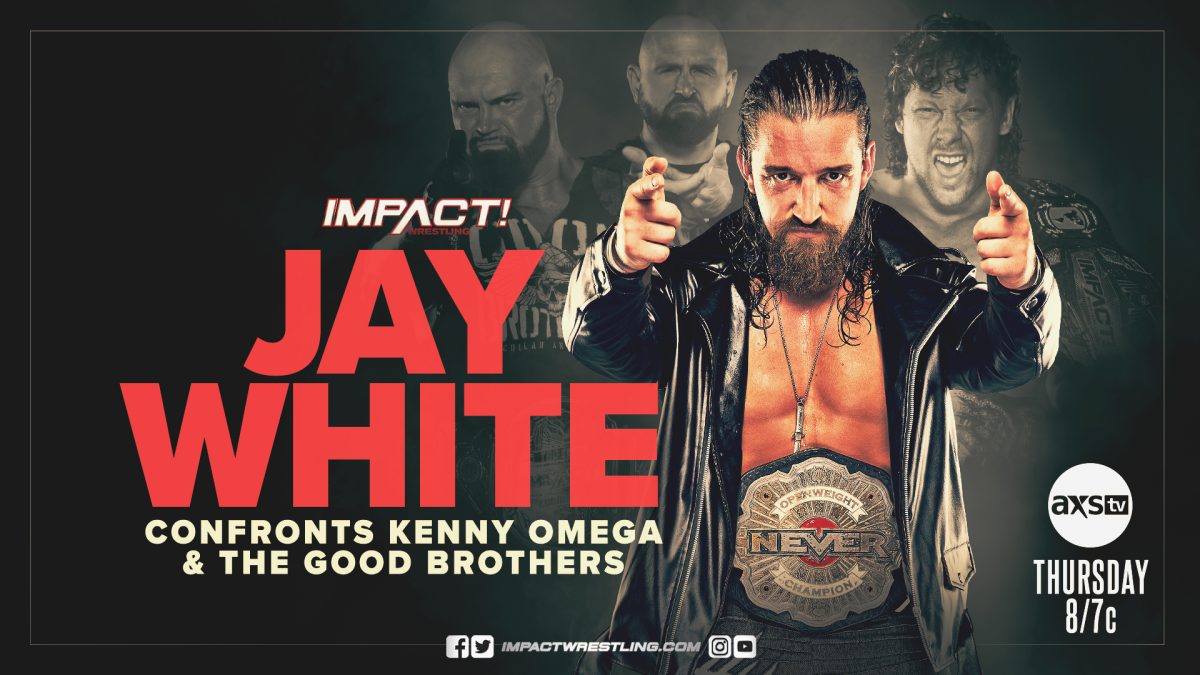 We see bonus footage from Slammiversary where Chris Bey discovers a Bullet Club T-Shirt in his locker room following a verbal altercation with Rohit Raju.

Rohit avoids a flying elbow from Bey, allowing him to capitalize with a modified backbreaker on the ropes. Rohit distacts the referee as Shera attacks him from ringside! Bey creates separation after Rohit crashes and burns with a running cannonball. Bey hits the Famouser, followed by a top rope clothesline for two. Rohit locks in the Crossface but Bey fights out and hits The Art of Finesse to win!

On his way through the curtain, Chris Bey is confronted by Jay White, the leader of the Bullet Club! White asks him if he got his message, referring to the Bullet Club shirt that was left in his locker room. Bey says that he walks alone but White questions if that’s been working out for him. White tells him to think about it before the offer expires.

.@JayWhiteNZ is always looking for the best talent for The Bullet Club – but his offer to @DashingChrisBey will expire… #IMPACTonAXSTV pic.twitter.com/HpnbSiaf33

Don Callis is concerned for the well-being of IMPACT World Champion Kenny Omega after his violent No DQ match with Sami Callihan at Slammiversary. Despite winning the match, Omega is worse for wear. Callis is also unhappy about the arrival of Jay White but says that as long as they have possession of the IMPACT World Title, they have all the power in IMPACT Wrestling.

.@MickieJames and @gailkimITSME have convinced @DeonnaPurrazzo to ACCEPT the invitation to @nwa #Empowerrr! #IMPACTonAXSTV pic.twitter.com/olekuHicza

Mickie James returns to the IMPACT Zone and invites Deonna Purrazzo to the ring. Mickie says that things got out of hand this past Saturday when Mickie delivered a superkick to the jaw of the Knockouts Champion. Despite all of that, Mickie’s desire to have Purrazzo appear at NWA Empowerrr remain. Purrazzo tells her that the only way she will appear is if Mickie apologizes. Tensions rise once again when IMPACT Hall of Famer Gail Kim comes down to deescalate the situation. After praise from Gail and Mickie towards “The Virtuosa”, Purrazzo shakes Mickie’s hand in agreeance.

The Hot Mess is BACK in action on IMPACT! #IMPACTonAXSTV @ImChelseaGreen pic.twitter.com/iEocnNgLj6

Cardona is on fire when Dashwood distracts him from the apron, allowing Myers to gain control. Myers hits a strong back suplex for two. Cardona counters a double team attempt from Myers and Beale into a double neckbreaker! Green tags in and goes on the attack. Green plants Dashwood face-first into the corner turnbuckle but Myers pulls her off the pin! Jake clotheslines Myers over the top rope to the floor. Kaleb With a K tries to get involved but Taylor Wilde returns and evens the odds! Green takes out Beale with the Unprettier to win.

After W. Morrissey used a steel chain to help him defeat Eddie Edwards at Slammiversary, Eddie wants to take things outside. Morrissey meets him in the parking lot and a brawl breaks out near the production trucks! Eddie assaults him with a series of kendo stick shots, forcing Morrissey to retreat!

Following their loss, Tenille Dashwood tells Brian Myers that she won’t be teaming with him in the Homecoming tournament, streaming July 31st exclusively on IMPACT Plus. Sam Beale is certain that he can find Myers a new partner.

Jay White is in the ring to explain why he came to IMPACT Wrestling. White says he’s in IMPACT for one person – his NJPW Resurgence opponent, David Finlay! White accuses Finlay of coming to IMPACT so that he could hide from him. White turns his attention to The Good Brothers and says they’re not good enough to be in his new era of the Bullet Club. IMPACT World Champion Kenny Omega, IMPACT World Tag Team Champions The Good Brothers and Don Callis interrupt. Callis refers to The Elite as the superior faction and tells White that he should ask for permission to join them. Omega and Callis allow The Good Brothers to handle the situation as they head to the back. Gallows and Anderson attack White until Chris Bey evens the odds to send them retreating!

The Good Brothers challenge Jay White and Chris Bey to a tag team match next week on IMPACT!

Juice hits Ace with a delayed vertical suplex, followed by a leg drop from Finlay. Ace and Fulton turn the tide as they cut off the ring and wear Finlay down. Ace connects with his signature springboard kick but Finlay kicks out at two! Finlay takes out Fulton with a slingshot crossbody to the floor. In the ring, Juice pummels Ace with a series of closed fists. Juice stacks up Fulton to score the pin and the win!

After the match, Ace and Fulton assault FinJuice from behind but the tables are quickly turned. FinJuice are about to hit the Doomsday Device when Rohit Raju and Shera join the fray! Rohit and Shera assist Ace and Fulton as they stand tall over FinJuice.

Rich Swann and Willie Mack reveal that Violent By Design are blaming them for their loss in the four-way IMPACT World Tag Team Title match at Slammiversary. Swann and Mack challenge VBD to meet them in the middle of the ring next week but Eric Young has other plans. The lights flicker as Violent By Design attack!

After falling short to Chris Sabin at Slammiversary, Moose demands a rematch. Sabin accepts and Scott D’Amore makes it official for next Thursday’s IMPACT! main event.

.@ScottDAmore just made a HUGE main event official for next week between @SuperChrisSabin and @TheMooseNation in a #Slammiversary rematch! #IMPACTonAXSTV pic.twitter.com/RNNaYIFfiH

Steve Maclin has demanded more competition and next Thursday on BTI, he gets it in the form of Trey Miguel! Don’t miss BTI Thursday nights at 7/6c on AXS TV.

The fallout from Slammiversary continues on an all-new IMPACT! next Thursday at 8/7c on AXS TV! Deaner and Rhino of Violent By Design battle Rich Swann and Willie Mack. Plus, Jay White teams with Chris Bey to take on The Good Brothers and so much more!

Rosemary and Havok take control from the opening bell as Rosemary hits Kiera with a sidewalk slam. Tasha attempts a running bulldog but Havok counters by tossing her halfway across the ring! Kiera distracts Rosemary from the apron, allowing Tasha to capitalize. Tasha wears down Rosemary with a series of stiff shots to the neck. Tasha hits a modified Codebreaker out of the corner for two. Rosemary connects with a reverse neckbreaker on Kiera. Kiera inadvertently superkicks her own partner, leading to a match-winning spear from Rosemary!

Decay celebrate another huge win as IMPACT! goes off the air.