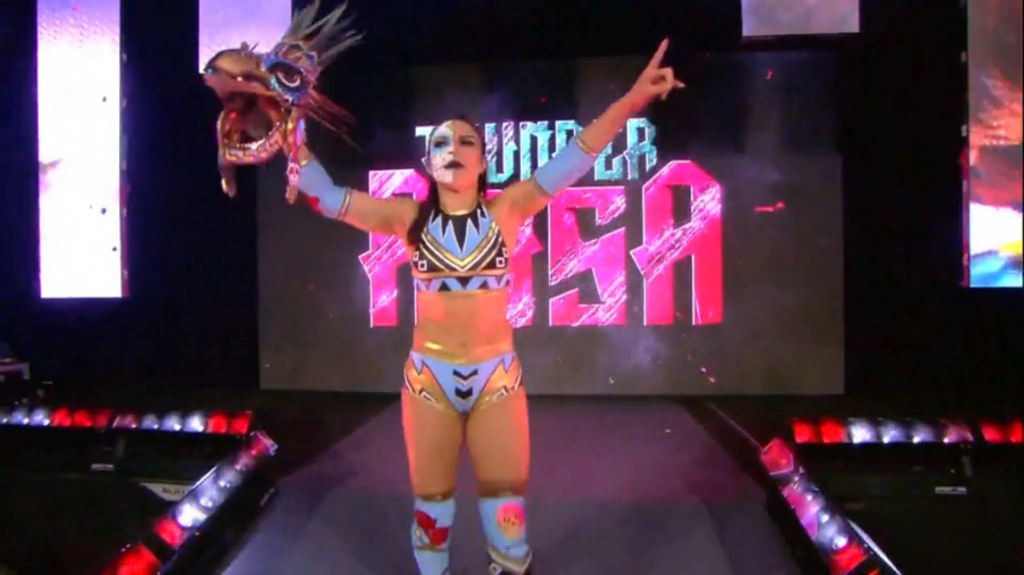 As noted before, this past Saturday’s Impact Wrestling Slammiversary 2021 event featured the surprise Impact debut of Thunder Rosa. Rosa was revealed as the mystery opponent for Deonna Purrazzo’s Knockouts Championship match at the event.

Fightful Select reported that Rosa’s appearance at the event was a one-time deal and Impact officials currently do not have any plans to use her for shows for at least the near future. Rosa reportedly was not seen backstage during Impact’s recent set of television tapings in Nashville, Tennesse.

It was also reported that Rosa’s appearance for Slammiversary had been put together over a month ago and had been kept as a secret from most of Impact’s locker room.

In regards to Drama King Matt, this is the former Aiden English in WWE who had a debut teaser vignette air during this past Saturday’s Slammiversary event.

In regards to Evans and Skyler, both had recently worked for AEW primarily for their Dark television series. Johnson reported that both were signed during this past weekend’s television tapings in Nashville, Tennessee.

Chelsea Green Comments on Her Recent Return to Impact Wrestling

A recent episode of the Green with Envy podcast featured host Chelsea Green discussing her return to Impact Wrestling at this past Saturday’s Slammiversary event.

“IMPACT welcomed me back this weekend with open arms and I’m so thankful for them. When I was first booked for Slammiversary, we didn’t know what I would be doing. It’s funny because it seemed like Twitter knew what I would be doing. Everyone assumed and tweeted that I was gonna be wrestling my best friend Deonna [Purrazzo] who is the IMPACT Knockouts Champion. Well, surprise Twitter. F*ck you Twitter. I’m just kidding, that was mean. But seriously, surprise Twitter, that was never the plan. So, sucks to suck, all of you who tweeted about that.”

Green also gave her thoughts on working her return match for the company at the event while still recovering from a broken arm injury.

“So obviously I’ve been talking about the familiarity — look at that fancy f*cking word. Ah, the familiarity of IMPACT, but one thing that wasn’t familiar clearly was wrestling with a broken arm. Slammiversary was in Tennessee so they don’t have a health commission, so a health commission cannot ban me from wrestling with a broken arm, see what I mean? So I f*cking did it. Yolo, right? Last week, obviously I was upset that I couldn’t wrestle for Ring of Honor in the Women’s Championship tournament but I understood why. The Maryland Commission was not having any of it. But in Nashville however, it is balls to the wall, woo! We were good to go so I took the opportunity and I ran with it, cast and all. I will say it doesn’t feel great, okay. Doesn’t feel ten out of ten but it was ten out of ten worth it, 100 percent worth it. A little pain, a lot of pleasure, that sounds dirty. Anyway, I’m struggling today but the pain wasn’t really my main issue getting back into the ring. My issue was actually more so mental. I wasn’t nervous it was gonna hurt. I just had this weird mental blockage. I didn’t realize how much this injury would affect me mentally this time around. I think the first and second time that I broke my arm, I truly believed in my head that it was a freak accident. So when it happened for the third time, because this is the third time I’ve broken my arm if you don’t know. I really was in my head about it. I was super nervous to get in the ring, I kept putting off practicing which is not really like me and I know it was purely because mentally I just wasn’t in a place where I felt ready to get back in, but I knew I just had to do it so I f*cking did it. I conquered the fear, I really had no choice. I kind of had to once my music hit, didn’t I? Imagine that, you guys, just picture Matt [Cardona] comes out first to his music and stands on the ramp and I don’t come out? Oh that would’ve been so good.”

As noted before, Eric Young has been out of action for Impact Wrestling since this past March due to a torn ACL injury.

Highspots Wrestling Network held a recent virtual fan signing event with Young as the guest. One of the topics discussed included Young providing a health update on the status of his ACL injury rehab.