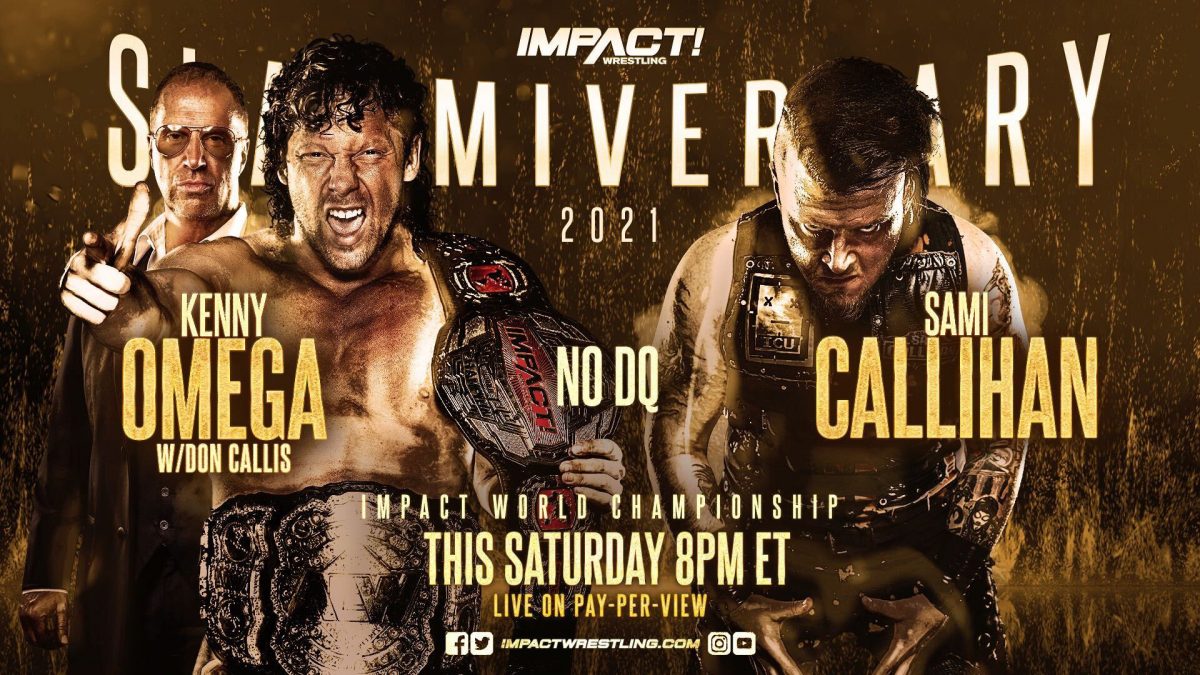 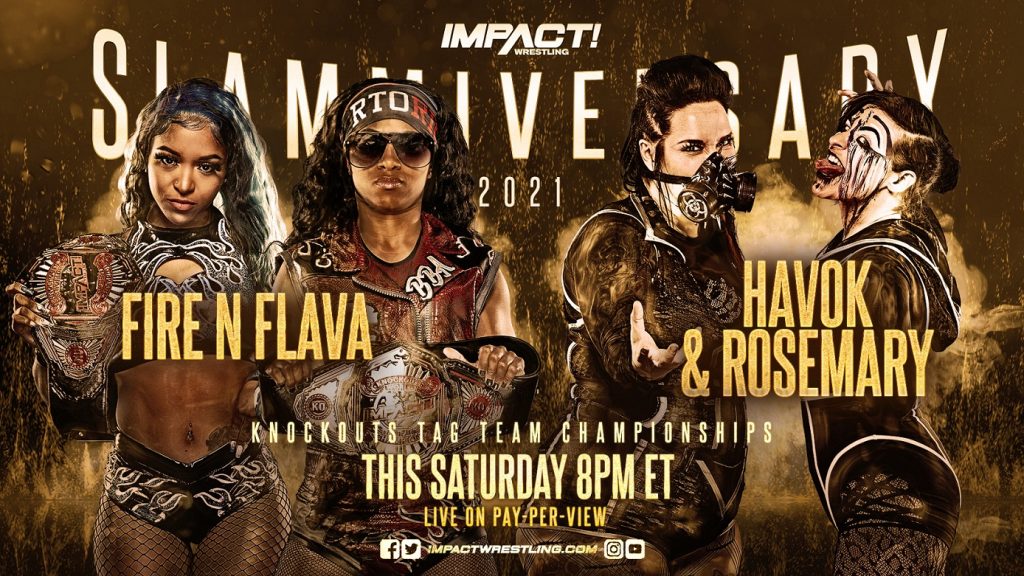 The action begins on the Countdown to Slammiversary pre-show, streaming LIVE on PPV providers, FITE and IMPACT digital platforms! Havok catches Tasha in mid-air with a sit-down slam! Havok whips Rosemary into the corner. Rosemary tosses Kiera across the ring with a suplex for two. Tasha hits a sliding dropkick on Rosemary, allowing Kiera to gain control. Tasha and Kiera cut off the ring, preventing Rosemary from making the tag. Several minutes later, Rosemary creates separation, allowing her to make the tag to the newest member of Decay, Havok! Tasha soars through the air, colliding with Rosemary and Crazzy Steve on the outside! Havok fights off a sleeper from Kiera, then connects with the Tombstone Piledriver for three! Havok and Rosemary are the new Knockouts Tag Team Champions! 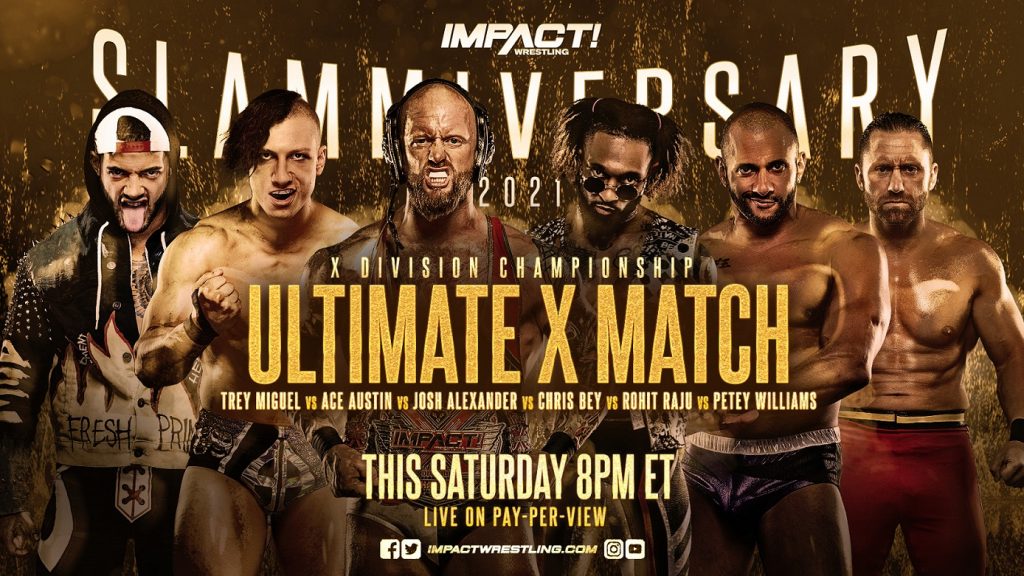 The X-Division Title hangs high above the ring for the return of the high-wire spectacle known as Ultimate X! Bey scales the ropes in the opening moments of the match but is quickly stopped by his opponents. Trey soars as he connects with a power slide DDT to Alexander. Ace Moonsaults from the top rope, colliding with everyone on the outside! Rohit uses a rope to climb towards the title but Petey pulls him down and hits a side Russian legsweep. Bey tries his luck once again but pays for it as Rohit spears him to the mat below! Rohit is unhooking the belt when Petey dropkicks him across the ring. Petey locks in the Sharpshooter on Trey as Rohit joins in with a Crossface. Alexander is hanging upside down from the wires when Rohit pummels him with a steel chair! Petey hits back to back Canadian Destroyers on Rohit and Trey. Alexander assists Petey with a super Canadian Destroyer to Bey!

Alexander and Bey fight over the title. Alexander sends Bey crashing to the mat and unhooks it to remain X-Division Champion! 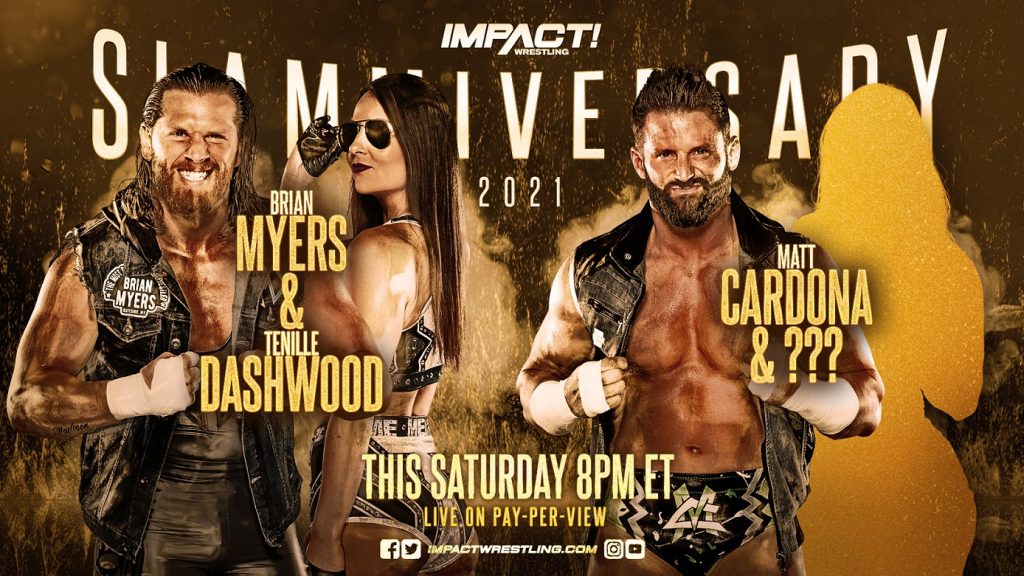 Chelsea Green is revealed at Matt Cardona’s mystery partner for tonight’s huge mixed tag team match! Cardona takes out Beale and Kaleb at ringside with a double clothesline. Myers capitalizes off the distraction and hits him with a Flatliner on the steel ramp! Cardona counters a vertical suplex into a neckbreaker. Just as Cardona’s about to make the tag, Dashwood pulls Green off the apron! Moments later, Cardona counters the Roster Cut clothesline and successfully tags in Green! Dashwood delivers a low blow to Cardona but he’s wearing a cup! Green hits Myers with a Canadian Destroyer! Green uses her cast as a weapon, then hits Dashwood with the Unprettier to win! 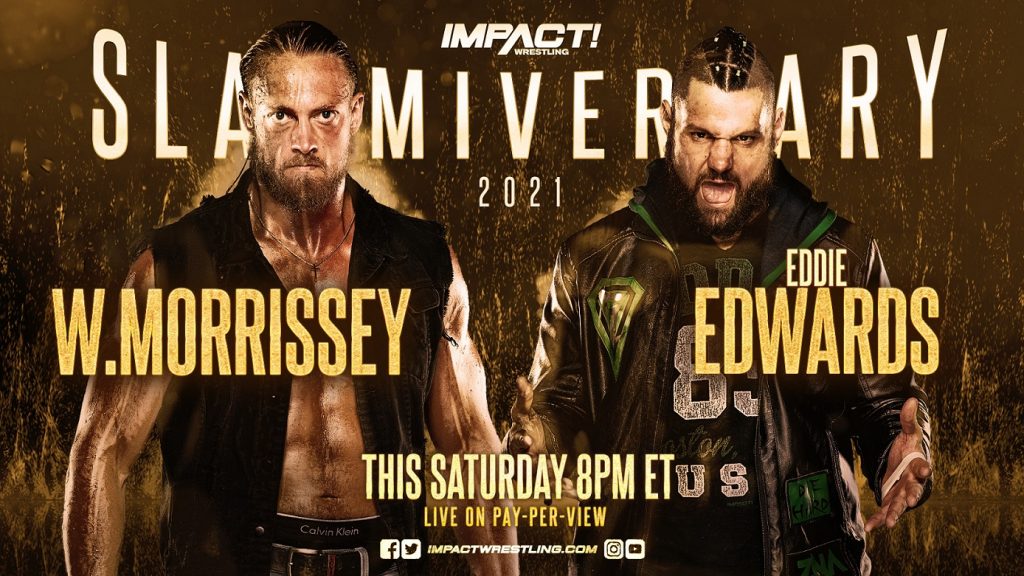 Morrissey gains the early advantage with a powerful fallaway slam. Eddie catches a big boot, then whips the leg of Morrissey into the steel ring post! Morrissey knocks Eddie off the apron, sending him crashing into the guard rail. As Morrissey looks to take out the “heart and soul” of IMPACT Wrestling tonight, he delivers repeated shots to Eddie’s heart! Eddie dives but Morrissey catches him in mid-air and delivers a chokeslam on the edge of the ring apron!

Eddie hits a back body drop on the ramp, followed by the Boston Knee Party! Eddie gets Morrissey up for a Blue Thunder Bomb, nearly bringing an end to Morrissey’s undefeated streak! Eddie hits another Boston Knee Party, but it sends Morrissey toppling to the floor! Morrissey wraps a chain around his fist and clobbers Eddie. Morrissey connects with his signature powerbomb to score the victory.

Moose sends a message to Chris Sabin ahead of their showdown later tonight.

Madman Fulton and Shera barge their way into the ring after being banned from ringside during Ultimate X earlier tonight. Scott D’Amore interrupts and puts them in an impromptu match against the returning NJPW stars, FinJuice!

Juice hits an Atomic Drop on Shera but “The Indian Lion” comes right back with an earth-shattering clothesline! Fulton demands the tag but FinJuice make him pay with a double flapjack. FinJuice make quick work of Fulton and Shera with stunning double team offense for three! 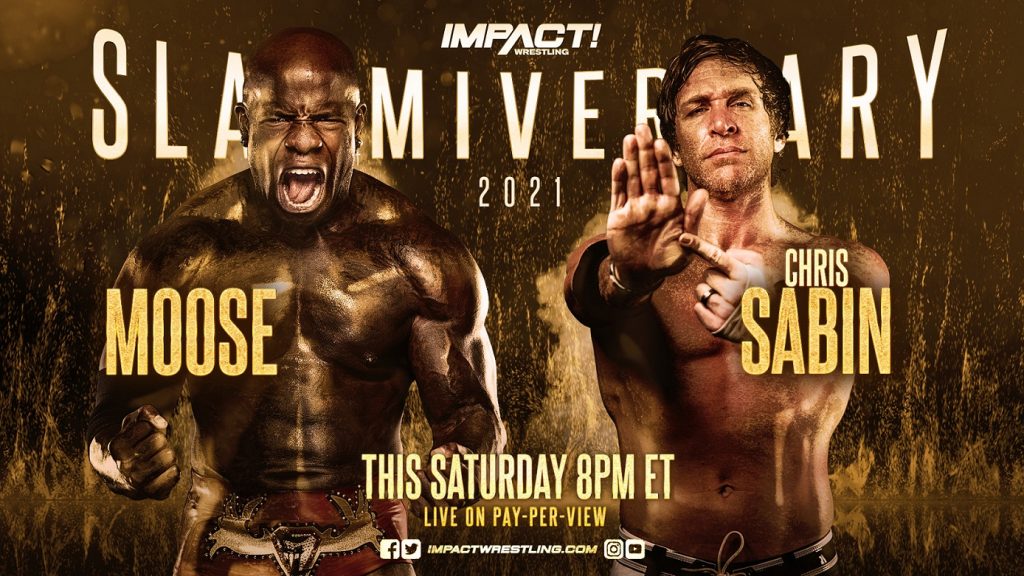 Sabin targets the legs of Moose in the early going. Moose launches Sabin into the corner turnbuckle like a lawn dart to gain complete control. Moose puts his power advantage on display as he traps Sabin in the ropes and delivers a series of chops to the chest. Sabin bites the fingers of Moose but Moose comes right back with a huge chokeslam. Moose crashes and burns with a Moonsault attempt, giving Sabin the chance to catch his breath. Sabin quickens the pace with a springboard crossbody to the floor, followed by a top rope tornado DDT! Moose sends Sabin halfway across the ring with a Moonsault fallaway slam!

Moose whips Sabin into the steel guardrail but somehow, someway, Sabin continues to fight. Back in the ring, Sabin rolls up Moose out of nowhere to score the pin and the win! 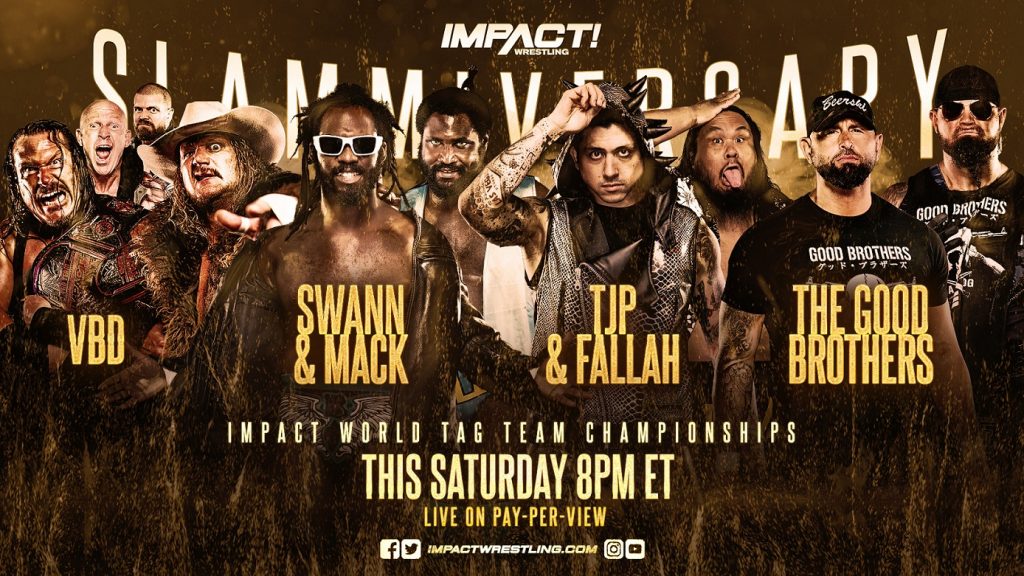 No Way brings the fight to Karl Anderson as he hits Anderson with a running splash in the corner. Gallows and Anderson cut off the ring and begin to wear Swann down. Gallows delivers a pinpoint spin kick, followed by a series of straight elbows. Swann creates separation with a jumping Enzuigiri to Anderson, allowing him to tag in No Way! Anderson hits No Way with a spinebuster but Doering breaks the pin attempt. Doering squares off with Gallows as these two giants exchange strikes. In an incredible display of strength, Willie hits Fallah with a Samoan Drop! Doering takes out No Way with a combination clothesline but this time it’s Swann who breaks the pin! Anderson hits Rhino with the Gun Stun. Gallows tags himself in, leading to a Magic Killer for the three count! 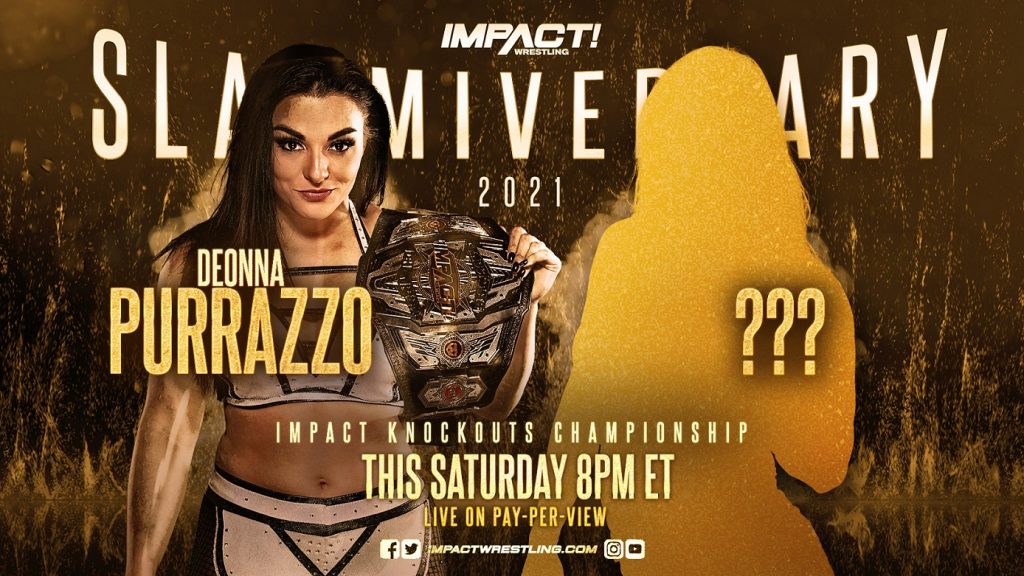 Thunder Rosa is revealed as Deonna Purrazzo’s mystery challenger for the Knockouts Title!

This dream match for the Knockouts Title is underway as Purrazzo and Rosa jockey for position. Rosa hits a running dropkick to the back of the head for two. Purrazzo gains control with an elevated Divorce Court. Rosa launches herself off the top, connecting with another dropkick! Purrazzo controls the arm and locks in the Fujiwara Armbar. As she reaches for Venus De Milo, Rosa counters into a choke! Purrazzo locks in the Fujiwara Armbar once again but this time, Rosa counters into a Death Valley Driver! Rosa hits a top rope double foot stomp to the spine of Purrazzo for a very close near fall.

Purrazzo connects with Queen’s Gambit to win the match and retain the Knockouts Title.

After the match, Mickie James makes her shocking return and confronts Purrazzo! Mickie gives her praise for her long list of accolades and invites her to NWA Empowerrr! Purrazzo disrespects her, leading to a superkick from Mickie!

Streaming Saturday, July 31st exclusively on IMPACT Plus, a Homecoming King and Queen will be crowned in a mixed tag team tournament at Homecoming!

IMPACT Wrestling returns to PPV on October 23rd with Bound For Glory! pic.twitter.com/9B4wnheLsq 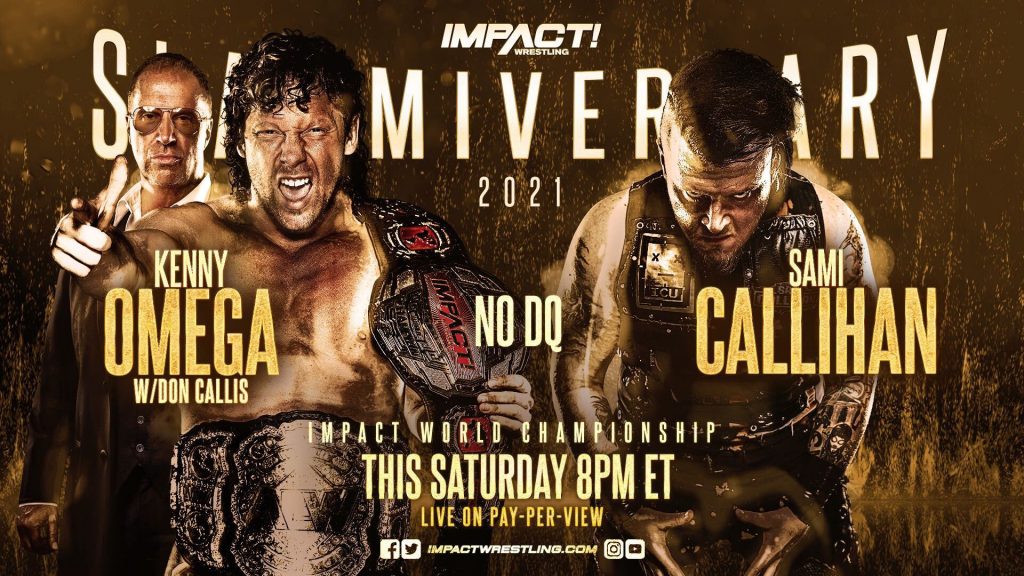 Callihan jumpstarts the match by attacking Omega from behind during his in-ring introduction. Callihan spikes Omega with a Piledriver but Omega kicks out at the last millisecond! In this match where anything goes, Callihan uses a pizza cutter to slice Omega’s forehead open!

Omega fights back with a series of chops to the chest. Callihan catches Omega in mid-air, then hits a Death Valley Driver. Omega targets the ankle as he hits a Moonsault with trash can in hand! Omega kicks him head first into a steel chair that’s propped in the corner. Omega continues the assault as he drives a fork into the forehead and mouth of Callihan. Callihan goes low, then sends Omega crashing through the table with a Piledriver!

Callihan hits a sidewalk slam onto a garbage can, then powerbombs Omega through another table for two! Callihan introduces a barbed wire steel chair but it costs him as Omega sends him back first into it with a powerbomb! Omega hits the V-Trigger but Callihan counters the One-Winged Angel into a Tombstone Piledriver on the barbed wire steel chair! Omega blinds Callihan with powder. Callihan inadvertently hits the referee with a Piledriver. Another referee runs down but when Callihan kicks out, Omega lays him out! The Good Brothers try to get involved when Eddie Edwards and Chris Sabin chase them to the back. Callis distracts Callihan from the apron, allowing Omega to throw thumbtacks in his eyes! Omega loads up his knee with thumbtacks and connects with the V-Trigger for two! Omega places thumbtacks in the mouth of Callihan, hits another V-Trigger, followed by the One-Winged Angel to win.

After the match, Omega stands tall alongside Don Callis and The Good Brothers. The lights go out as Bullet Club music hits. The leader of the Bullet Club, Jay White, makes his way to the ring! White stares them down as Slammiversary goes off the air.