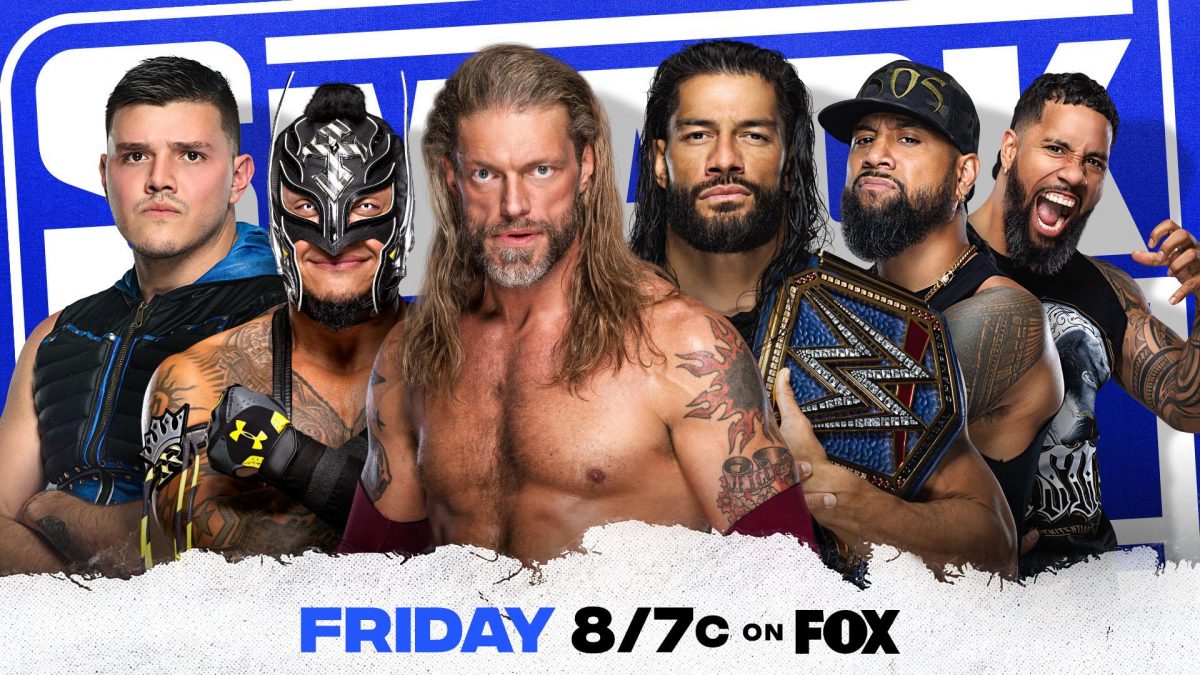 A video package airs hyping up the return of the WWE Universe.

Live in the arena, out comes Vince McMahon onto the stage. He asks everyone “Where the hell have you been? and heads to the back.

The bell rings and we are under way. Roman distracts Edge as Jey attacks him from behind. Jey to the ropes but a Edge drops him face first onto the mat. Dominik is tagged in and an arm bar on Jey as Rey is tagged in and they double team him. A back elbow by Jey and Jimmy is tagged in. An arm drag take down by Rey and Edge is tagged in.

Roman rolls Dominik back to the outside. He slams Dominik face first into the announce table. Roman picks Dominik up and powerbombs him onto the table.

Back from commercial, Dominik with a DDT off the top rope onto Jimmy. Jey and Edge are tagged in. Edge knocks Jimmy down and throws Jey into the top turnbuckle. A baseball slide onto Jimmy on the outside and he knocks Roman down on the outside. Edge back into the ring and Rey is tagged in. Rey with a sit down senton on Jey. A tornado DDT by Rey. He goes for the cover but Jimmy breaks it up.

In comes Dominik who throws Jey to the outside. Dominik flies to the outside onto Jimmy. Roman throws Dominik into the ring post. In the ring, Rey sets Jey up for the 619. He goes for it but Roman catches Rey and slams him into the ring apron and throws him in the ring. Edge with the spear on Roman on the outside. Rey rolls Jey up but Jey kicks out, a right hand by Jimmy as Jey rolls Rey up by the tights and gets the pin.

Winners: Roman Reigns and The Usos

Dominik gets in the ring as The Usos attack him. Edge grabs a chair and knocks then both down. Roman with the Superman Punch on Edge. Roman sees the chair in the ring. Roman breaks part of the chair and grabs the bar but Edge hits him with the spear. Edge with the crossface using the bar on Roman as Roman taps out. 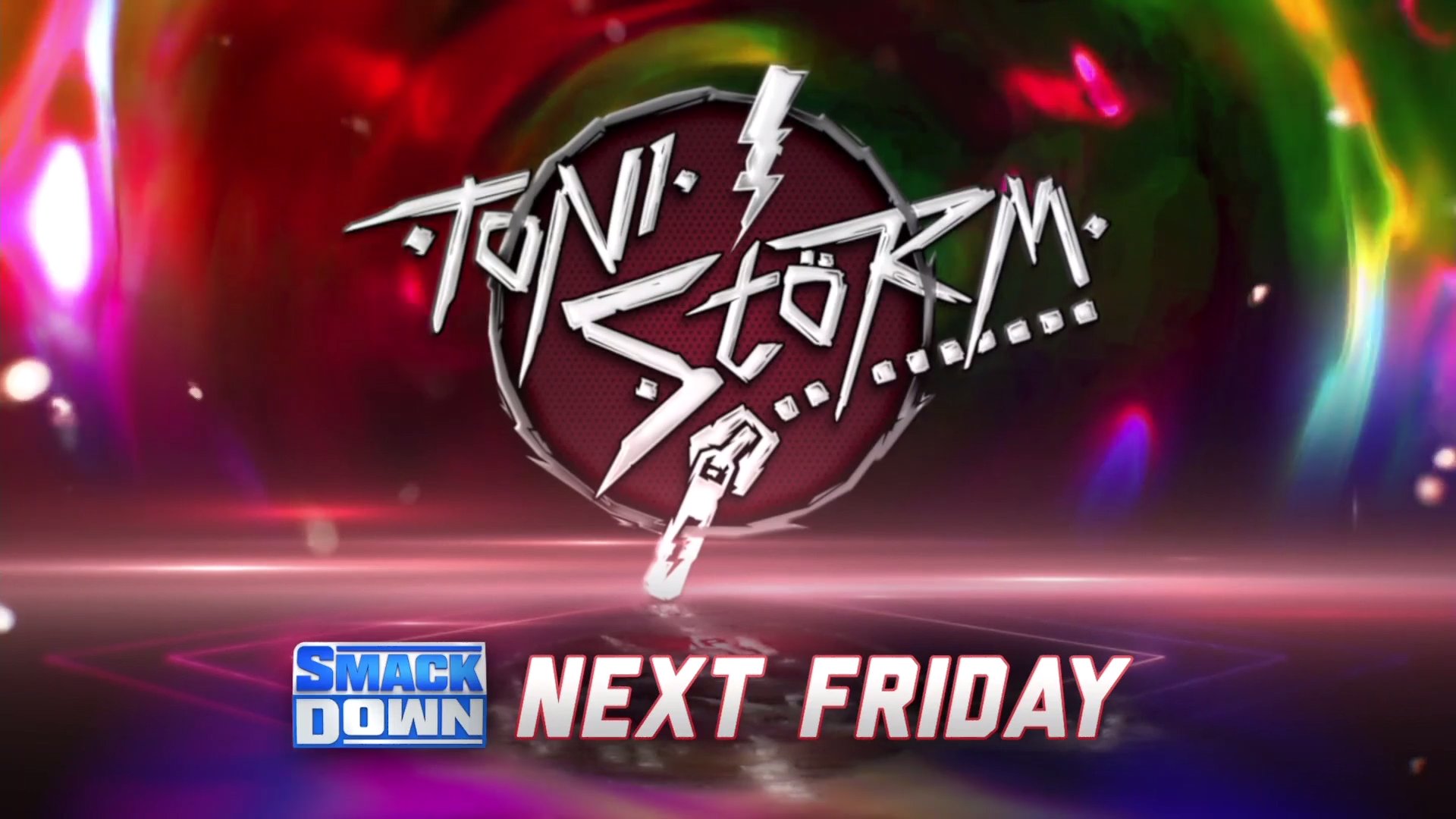 A video package for Toni Storm airs. She will be on SmackDown next week. 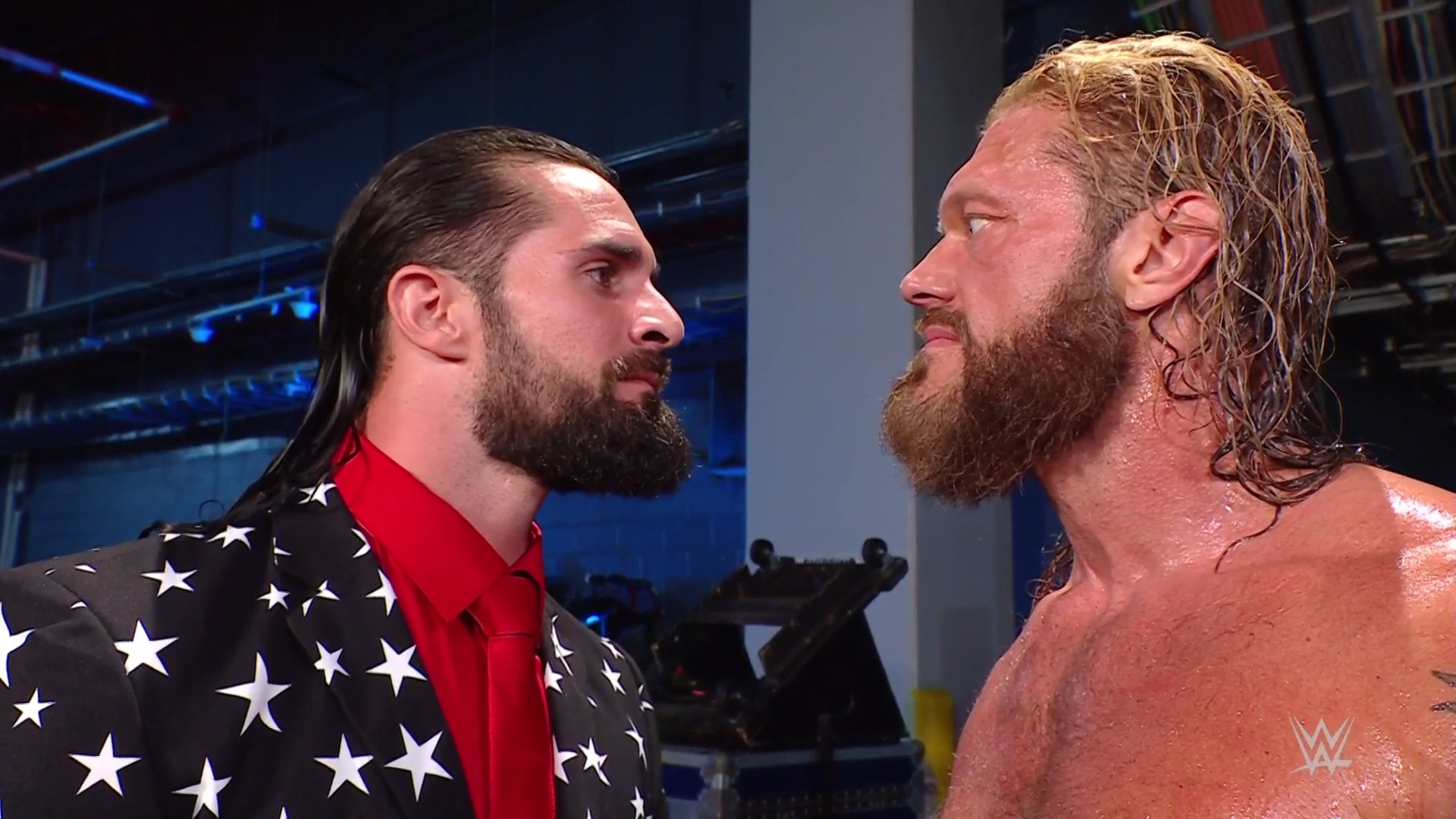 Edge and the Mysterios are backstage and in comes Kayla. She asks him about his match vs. Roman. Edge says he wishes he could say that by making Roman tap out like a bitch earlier would make it easier for Sunday but it’s not the case. He said he might have to go to a dark place on Sunday to win.

As he is talking, Seth Rollins comes in laughing. Seth tells Edge that he can’t beat Roman. Seth says Roman has Edge’s number and on Sunday, Seth will be his biggest fan and he hopes Edge wins because he will win Money in the Bank and he will finish what he started 7 years ago when he had his boot on his neck and he didn’t pull the trigger.

Out comes Sami Zayn to the ring. Sami says everyone is talking about the Money in the Bank ladder match but no one is talking about how Sami is being excluded. He says they want them to focus on the happy things. The fans are back, a new entrance way, shiny lights. It’s all to distract them and for over a year, there has been a conspiracy targeting Sami Zayn.

He says it’s fine because tonight, he has something in his corner that he hasn’t in a while. And that’s the fans. Because they have seen it all. They have seen him be persecuted and he needs them all to stand up and make their voices heard. To let them know that this conspiracy will not stand. He starts chanting “justice for Sami” as some people in the crowd chant it.

Sami says the yee-haws of Texas are not on his side and he doesn’t need them. He needs justice. And if there was any justice, the briefcase over the ring would be lowered right now and he would be handed the contract. That would be justice. And he will not let the show go on until justice is served.

Finn Balor comes down to the ring. Sami introduces him to the crowd and he welcomes him back. Sami goes for a right hand, Finn blocks it and knocks him down. Finn with a drop kick. He climbs the top rope and hits him with the Coup de Grace.

Liv Morgan and Zelina Vega are on commentary. The bell rings and we are under way. Tamina with a bodyslam on Shotzi. Tamina knocks Nox to the outside and Natalya is tagged in. She stomps on Shotzi in the corner. Natalya goes for the bodyslam but Shotzi lands on her feet and knocks Natalya own. Shotzi with a back elbow as she goes to knock Tamina down but Natalya knocks Shotzi down.

Tamina is tagged in as they double team Shotzi in the corner. Natalya runs towards Shotzi but Shotzi moves out of the way and Nox is tagged in. A forearm by Nox as she knocks Tamina off the ring apron. Nox with a back elbow onto Natalya in the corner. Nox with the Shinning Wizard. She goes for the cover but Tamina breaks it up.

Liv and Zelina argue on the outside and begin to fight. Nox rolls Natalya up and gets the pin.

Tamina breaks up the fight on the outside. Liv knocks Tamina and Natalya out as she stands below the Money in the Bank briefcase in the ring.

The bell rings and we are under way. Carmella slaps Bianca and slides to the outside of the ring. Bianca chases her as Carmella gets back in and a take down by Carmella. She gets up but a shoulder block by Bianca knocks Carmella down. Both women back up and back elbows by Carmella knocks Bianca down. She goes for the cover but Bianca kicks out. Carmella places Bianca on the ring apron but a right hand by Bianca. She grabs Carmella’s arm but Carmella slams Bianca shoulder first into the ring post. Carmella throws Bianca onto the barricade and back into the ring. Carmella goes for the cover but Bianca kicks out.

The Alpha Academy are backstage as Gable says they can feel the tension when they enter a room. He says people are in awe of Otis and he can see Otis getting the win vs. Cesaro tonight.

In comes Cesaro who says he smells bull, just like he smelled it last week when they read the names of the people Otis could defeat. Otis attacks Cesaro and takes him down.

The bell rings and we are under way. A right hand by Otis as he sends Cesaro to the ropes. Cesaro with an uppercut. Gable gets on the ring apron as that distracts Cesaro and Otis with a slam takes Cesaro down. Otis goes for a splash in the corner but Cesaro moves out of the way. In comes Gable who lands a German suplex on Cesaro as the referee calls for the bell.

Gable celebrates but Cesaro hits him with a pop up uppercut. Cesaro swings Gable around and in comes Otis who slams into Cesaro taking him down. Otis gets on the second rope and with a slam onto Cesaro.

We cut backstage and Kayla is with Heyman. She mentions Edge as he cuts her off. He says Edge sinned tonight against the tribal chief who will confess in a tomb for those sins. He says Edge will have those sins beaten out of him at Money in the Bank. He tells her what he just said is not a prediction… and in comes Big E.

He tells him not to be sour and to clap for the man who will the Money in the Bank contract and feel the power. Big E says there was something serious he needed to talk to him about. It appears as if Edge has a hold of Roman Reigns. Big E laughs and walks away.

Out comes Baron Corbin wearing a dirty shirt and not looking too good. He says it’s no secret and to look at him. These last few weeks have been the most difficult time of his life. He lost everything. His crown, his car, his investments and his savings. Now the bank is threatening to foreclose on his house.

Corbin says his two year old daughter is sick because she has to eat spaghetti out of a can instead of wagyu beef. His house is mess and he has had to fire the maids. And he might even have to move in with his wife’s parents. But there is hope, there is good news because everyone there and everyone watching can help him out of the dark financial times.

He says he has started a crowd funded website and it is called Corbin Fund. The target is $100,000 and he is not asking for much, just enough to pay a few bills and get back on his feet. He tells everyone to go to CorbinFund.com and to donate. Corbin gets down on his knees and he is begging everyone to donate.

Out comes Kevin Owens. He gets in the ring and Corbin tells him that he wants to believe that he is out there for the right reasons. That Owens is out there because he wants to help him. He tells Owens if he helps and him and others help him, the others will fall in line. He says they are alike, they have a heart and they sympathize with those who are less fortunate and in need. And he knows that Owens has money. And not to take it the wrong way but he knows Owens doesn’t spend money on his wardrobe. Owens hits him with the stunner.

The bell rings and we are under way. Rollins tells them to fight as he goes onto the ring apron but Big E spears him to the outside. Owens flies over the top rope onto Big E and Nakamura with a knee to the face onto Owens.

Nakamura goes for the Kinshasa on Owens but Big E hits him with the Big Ending. He goes for the cover but Rollins breaks it up. Seth goes to the outside and grabs a ladder as he hits Nakamura with it. Seth clears the announce table on the outside. He places Nakamura on the table but Owens knocks Seth down. Owens climbs the ladder and lands an elbow onto Nakamura through the table.

In the ring, Seth with a Stomp on the ladder on Big E. He goes for the cover and gets the pin.

Rollins climbs the ladder and grabs the Money in the Bank briefcase above the ring in celebration as the show goes off the air.