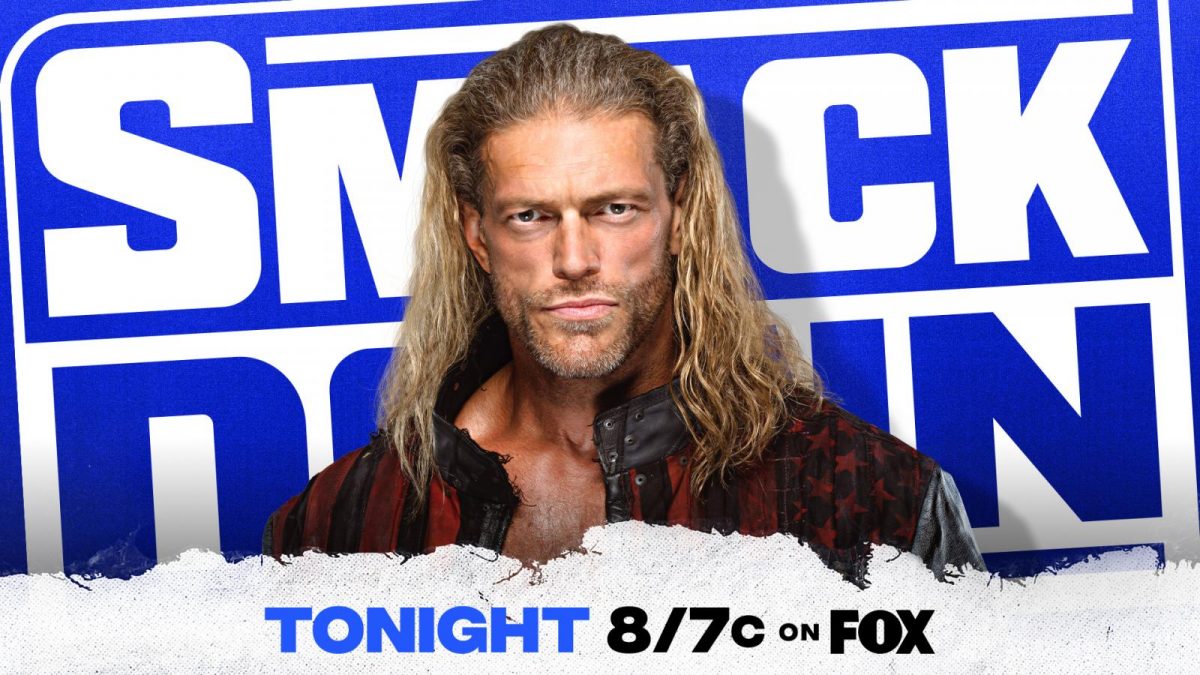 In the arena, Edge makes his way down to the ring. He says WrestleMania was supposed to be the culmination of a 10 year story. Winning the Universal Championship 10 years to the day after he had retired. It would have made for a good story and he envisioned it and he knew it would happen. But it didn’t. Edge says that wasn’t in his vision. He says he took some time but eventually he started to roll the match back in his brain. He says he even watched the match again and he never does that. And Roman glossed over a few things.

Edge says his fear of Daniel Bryan being involved ended up costing him his match. And he did. Roman should have tapped out. Bryan pulled the referee and Roman was out. He can complain about how Jey stopped him from hitting the conchairto, he could complain about those things. He says 2006 Edge would have but in 2021, he has to understand that here will always be excuses, obstacles. He spent his entire career knocking down obstacles or he would not be standing here right now. He says he doesn’t stop. He says he knows he can beat Roman one on one and Roman knows that too. He says he knows Roman will never admit it but he has proof.

We see a picture of Edge with the crossface on Roman at WrestleMania. He tells Roman that the look on Roman’s face last week when he heard his music, he knew that he is the guy that has one up on him. Edge says he will beat Roman, it’s just a matter of when. He is inevitable and he will be WWE Champion.

We see Paul Heyman watching Edge backstage and in comes Jimmy. He tells Heyman that they are family, he has Roman’s back just like Roman has his. And when Roman gets here tonight, he and the tribal chief will put Edge down and they will plant the family flag right in the middle of his heart.

Rick Boogs is playing the guitar and out comes Shinsuke Nakamura.

The bell rings and we are under way. Apollo and Nakamura are in the ring. A shoulder block by Apollo takes Nakamura down. Nakamura back up and a kick to the side of the head. A back elbow by Nakamura as he places Apollo horizontally on the top rope and a knee to the midsection by Nakamura. Big E is tagged in. Big E with an abdominal stretch. He throws Apollo in the corner and Corbin is tagged in as Big E knocks Corbin down to the outside. Big E to the outside but a clothesline by Corbin.

Back from commercial, Corbin and Big E are in the ring. Corbin with a headlock in the middle of the ring. He goes for the cover but Big E kicks out. Apollo is tagged in as they double team Big E in the corner. Right hands by Apollo as he sends Big E to the ropes and a drop kick by Crews. Apollo runs towards Big E as Big E throws him to the outside but Corbin tags himself in. Corbin with a power slam. He goes for the cover but Nakamura breaks it up. Crews with a German suplex on Nakamura and both men to the outside.

Rick gets on the microphone and says the owner of a white Mercedes outside with a King CR license plate, their car is being towed. We see Mercedes G-Wagon being towed away outside as that distracts Corbin. Big E hits him with the Big Ending. He goes for the cover and gets the pin.

Bayley is in the ring and she says she isn’t the type of person to come out and brag and say she told us, but she told us. She says Bianca’s win at Hell in a Cell was a fluke and she proved it last week when she pinned Bianca. But the best part was Bianca’s look in her eyes, she was sitting questioning everything that she did wrong. We know how strong Bianca is but mentally, she is weak because she knows she made it look easy when she held the WWE Women’s Championship for 380 days. But a loss that early for Bianca in her title reign is not good. She says Bianca is crumbling at the expectations.

Out comes Bianca to the ring. She tells Bayley she needs a crack to her mouth because she may want the title but she has the title. And she keeps beating her over and over again. And Bayley can’t let go or move on. And Bayley thinks that she is in her head. Bayley says Bianca can’t even look her in the eyes. Bayley says Bayley is in her head and no matter how many times she beats her, she will keep come up with excuses. Bianca says there is only one way to end this and that is for her to embarrass her to the point of no return.

Bianca says if the officials will allow it, she challenges her to a match at Money in the Bank where she will put her title on the line in an I Quit match. Bayley laughs and says she knows her well enough to know that she has never quit anything. This is what she has always wanted to do her entire life and she accomplished everything she said she would. And if Bianca can make Bayley say she quits, she would probably quit WWE. She laughs and says she would quit competing all together. But hearing Bianca say the words I quit would not surprise her at all.

Bayley says they both know Bianca is not the champion she pretends to be and she accepts. Bianca laughs as Bayley asks her what’s funny. Bianca says she thought she was sick of hearing Bayley speak but she just realized how excited she is to say the words I quit.

Paul Heyman is backstage and in comes Jimmy Uso who asks if Roman is there yet. He asks Heyman what Roman is waiting on. Jimmy says he will go to Adam and Sonya and main event Jimmy Uso will call Edge out and beat him up.

Owens slams Sami into the LED boards. Owens throws Sami back over the barricade. Owens on the barricade and a senton onto Sami. The referee begins the count but Sami gets up at six. Owens slams Sami into the announce table. Owens on the barricade but Sami gets to his feet and he throws Kevin onto the announce table but the table doesn’t break. The referee begins his count but Owens gets to his feet at seven.

Sami throws Kevin back in the ring and right hands by both men. Sami with the exploder into the corner. Sami places Owens on the top rope and Owens with an inverted fisherman’s suplex off the top rope and onto the mat. The referee counts to eight and both men are up. Owens with a kick to Sami in the corner. Owens places Sami on the top rope, Owens climbs up as Sami slides under him and pushes Owens to the outside as Owens falls through the two tables on the outside of the ring. The referee begins his count and Owens gets up at nine and Zayn can’t believe it.

Megan is backstage with Edge as she asks him about Jimmy. Edge says he knows what is coming and if they are trying to pull one on the ultimate opportunist, it’s a loss for them. He knows he will go out there and it will become a two on one but he doesn’t care. He is tired of Roman, his family and excuses. If they want to set up a trap, he is fine with that.

Rick Boogs stops Corbin backstage. He tells Corbin that he thinks he will feel good tonight after sleeping in his king size bed. Rick goes on to make more king jokes as Corbin tells him to screw himself and he walks away.

Sonya is in the ring as she announces Zelina Vega as the second contestant in the Women’s Money in the Bank match! Out comes Zelina as she says it will be her pleasure to win the Money in the Bank, cashing it in and becoming the Raw, SmackDown or NXT Champion.

Out comes Liv Morgan who says it’s bad enough that Carmella was announced in the match without having to qualify. But now she just rewarded Zelina Vega too. Liv says Zelina doesn’t deserve to be in the match. Zelina mocks her and says she has competed in this ring and rings like it for years. She is one of the most popular female competitors in WWE history. She says she can run circles around her and embarrass her. Liv challenges Zelina to a match right now and Sonya agrees to it.

Seth Rollins walks into Adam and Sonya’s office. He runs down his accomplishments. He says he thought they forgot about him as they went with Edge for Money in the Bank. Sonya says they would think about it. Adam says Edge deserves the opportunity. Seth says he deserves it because he is Seth Rollins. Adam says and he is Edge but Edge did win the Royal Rumble and he did not get his one on one chance. Seth says that’s not his fault. They put Bryan in there.

Jimmy is backstage and he asks Heyman where Roman is. Heyman says the tribal chief operates on his own time and everything he does, he does for family. All Jimmy needs to do is go out there and be main event Jimmy Uso. Jimmy says he will as he walks to the ring.

Jimmy Uso makes his way down to the ring and calls Edge out. Jimmy says there’s no Roman tonight and he doesn’t need Roman because he can handle Edge all by himself. He says Edge isn’t man enough to step into the ring face to face with him. He says this isn’t a trap, this is him calling Edge out.

Edge comes out and he tells Jimmy that Roman is using him just like he uses his entire family. He says Roman attacked Jey until Jey acknowledged him. And now he is doing the same to him. He says he is just another one of Roman’s bitches. And what Jimmy doesn’t realize is Roman laid a perfect trap but this isn’t a trap for him. This is a trap for him.

Jimmy looks around as Edge walks down to the ring. Edge throws Jimmy shoulder first into the ring post. Edge sets up the stairs but Jimmy hits him with a super kick. Jimmy throws Edge back in the ring and right hands by Jimmy in the middle of the ring. Edge fights back with a big boot. Right hands by Edge as he gets a submission on Jimmy and Jimmy taps out.

Edge hits him with the spear. Edge goes to the outside and grabs a chair as he breaks a piece of it off. Edge with a crossface on Jimmy as he uses the bar from the chair for leverage.