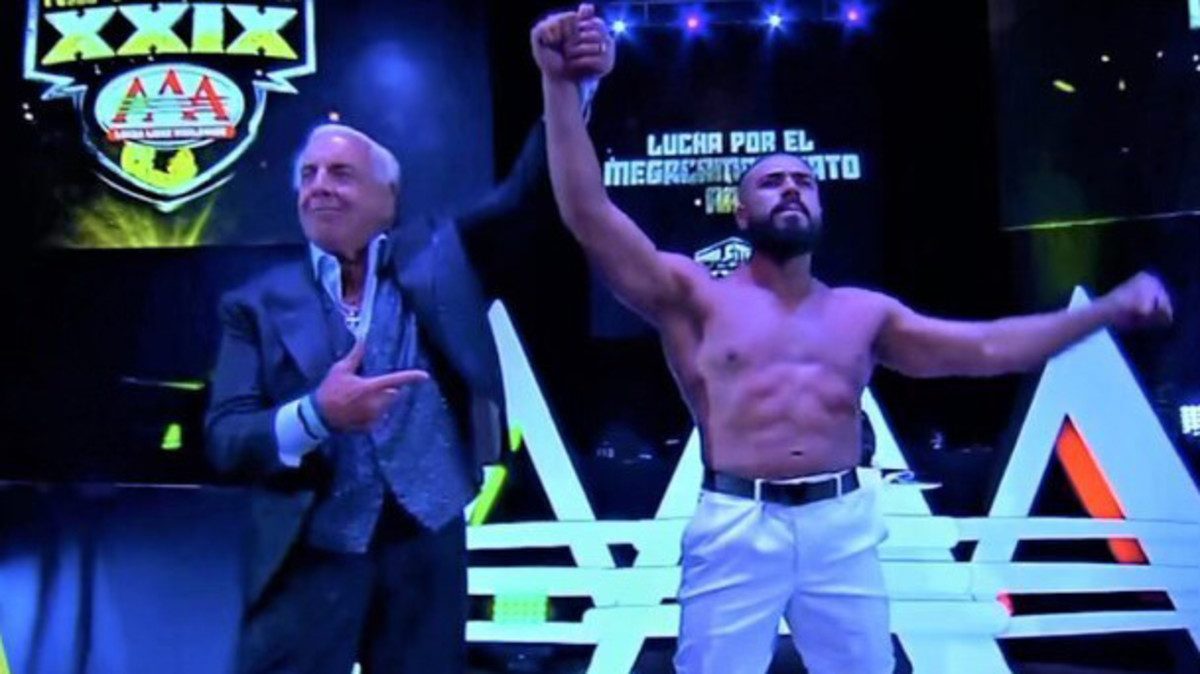 Sports Illustrated held a recent interview with Andrade. Some of the topics discussed included Andrade revealing why Charlotte Flair was able to be backstage at this past Saturday’s AAA Triplemania XXIX event and his thoughts on Ric Flair being in his corner for his match at the event.

On the topic of Charlotte Flair’s backstage appearance at Triplemania, Andrade stated:

“Ashley knew how important this was to me, so she asked for the weekend off two and a half months ago. She told me she was so nervous watching my match and tearing up, so it meant a lot that she could be there. With Ashley, we have the best of both worlds. She teaches me. I teach her. She teaches me how to take time on my entrance, how to stand in the ring, the little things that people notice when they look at you. I help her with moves, submissions, adding wrinkles to her move-set. She was the person I went to when I asked what I should do about my future. She knew I was unhappy, and I knew she was going to be sad if I left [WWE], because our life is on the road together. But she knows this is my dream, and she supported my decision without hesitation. Watching me with my new gear, seeing me train so hard the last two months, she said she was so proud of me. She says my dreams inspire her. She said she can see a change in me and my happiness. That’s all that matters.”

On the topic of Ric Flair’s surprise appearance and being in his corner for his match at Triplemania, Andrade stated:

“Mr. Flair came to Mexico, which I still can’t believe. When he hugged me during our entrance, that was real. A bond for the love of what we do professionally that is in our blood. The bond of family. No one has had more experience than Mr. Flair. To have his support, his credibility, wanting to come with me to my home country, that was overwhelming. I am beyond grateful. His support and belief in me means more than I can put into words. Being in the ring with one of the greatest of all time, putting on one of the most famous submission holds, that’s something I could have never dreamed. I grew up a poor luchador from Northern Mexico. Now I am exchanging chops with a legend. That whole time, I could feel his energy. And seeing all his passion for this business, how much he means to this business, and watching all the stars at the show want to take a picture with him, it was amazing.”

The NWA announced that AEW’s Red Velvet & KiLynn King are the next official team for their Women’s Tag Team tournament at their Empowerrr event on August 28th in St. Louis, Missouri.

The NWA also announced that ThunderKitty is the next official competitor for their Women’s Invitation Cup battle royal match at their upcoming Empowerr event.

New Japan Pro Wrestling recently announced that live English commentary will be available as an option on New Japan World for all of this year’s upcoming G1 Climax tournament events.

The official GoFundMe fundraiser for Brian Knobbs recently provided a health status update on Knobbs’ current hospitalization due to serious stomach-related issues. It was stated that Knobbs recently had complications with his sodium levels that delayed upper stomach probe testing. Those complications were stated to have been resolved recently from a liquid diet Knobbs underwent until his sodium levels were back to normal and Knobbs was able to undergo successful probe testing.

Revolution Pro Wrestling recently announced a new match for the card of their 9 Year Anniversary event on August 21st in Manchester, England: