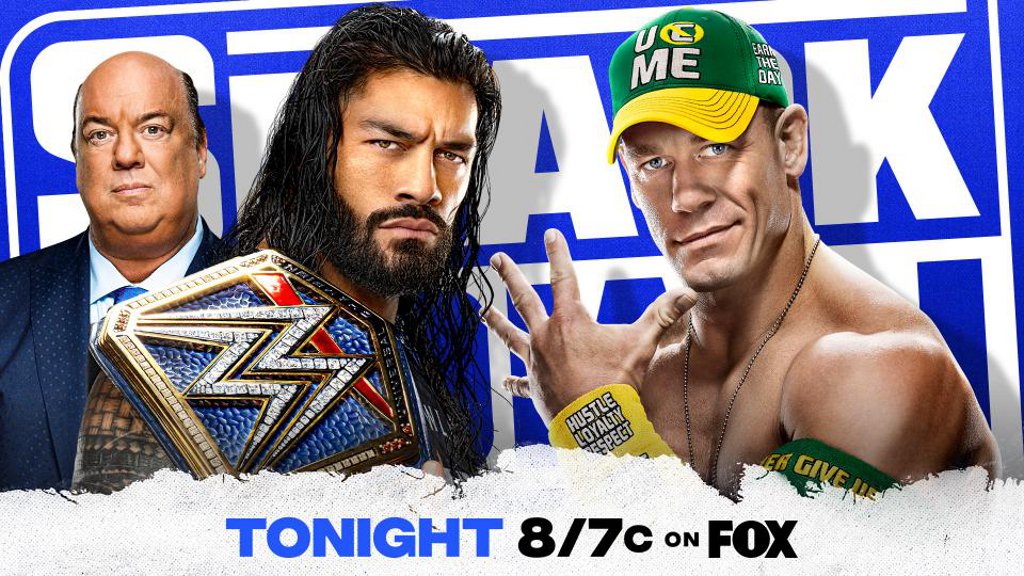 WWE SmackDown kicks off with Edge making his way down to the ring. He sits down on a chair in the middle of the ring as the fans chant Edge. He tells Seth that he saw what he said last week but more importantly, he heard what he said last week. Edge says it sat with him, his boot on the back of his neck, his face mashed on the Moeny in the Bank briefcase. He knows it was 2014 but he still feels it like it was yesterday. He says he was worried about his way of life, his wife, his kids.

He says last week, Seth threatened all of those things again. He says he knows what that curb stomp can do to him, he has a triple fusion in his neck. He knows that if you hit that curb stomp, it’s probably his career and it changes the way he will live his life.

He says that’s the mind games you have to play when going up against him. But with Seth, he looks in his eyes and he means everything he says. Edge says Seth is an all time talent but Seth has pushed him into a dark place. He got pushed to ap lace he does not like to go because it is so hard to come back. And because if he is being truthful, it’s becase he likes it.

Edge says Seth made him find a place in his heart where the blood runs black. He says he does see clearly on this day, he sees that at SummerSlam, he doesn’t just have to beat Seth, he has to break him. He has to humble Seth. And at SummerSlam, he is going to burn him down.

We cut to the back and it’s Dominik and Rey as they talk about Rey’s match tonight vs. Jey and their match tomorrow. Rey says Dominik got distracted last week. Rey tells Dominik to watch his back out there and to be alert.

The bell rings and we are under way. A shoulder block by Jey throws Rey to the outside. Rey gets back in the ring and a headlock by Jey but Rey sends him to the ropes and a hurricanrana by Rey takes Jey down. Rey with right hands in the corner. A big right hand by Jey knocks Rey down. A head lock by Jey in the middle of the ring but Rey gets out of it. Forearms by Rey followed by a back elbow.

Rey climbs the top rope and jumps but Jey catches him and Rey on Jey’s shoulders and he throws Jey to the outside of the ring. Rey with a moon sault off the second rope to the outside.

Jey is tripped up onto the ropes. Rey goes for the 619, Jey blocks it, Rey with a sunset flip, he goes for the cover as Dominik puts his legs on Rey pushing him for leverage but the referee sees it. Dominik is kicked out of ring side. Rey goes to the outside and argues with Dominik. Jimmy knocks Dominik down, Jey pushes Rey onto the ring steps. He throws Rey back in the ring and hits him with the Uso splash. He goes for the cover and gets the pin.

The bell rings and wea re under way. Owens with right hands as he slams Corbin into the ma. Corbin back up as Owens grabs him but Corbin with a big right hand. Corbin runs towards Kevin, slides to the outside, gets back in the ring and hits him with a cothesline. He goes for the cover but Owens kicks out.

Corbin with right hands as he slams Owens into the turnbuckle. Corbin runs towards Owens but Owens moves out of the way and Corbin on the ring apron. Owens with a super kick knocks Corbin down. Owens with a senton off the ring apron. He throws Corbin back in the ring. Owens climbs the top rope as Corbin rolls to the ring apron. Owens grabs Corbin but corbin hangs him up on the top rope. Corbin goes for a chokeslam, Owens lands on his feet, he goes for the stunner but Corbin pushes him away and rolls to the outside of the ring.

Big E’s music hits and out he comes. Corbin runs around the ring. He grabs the Money in the Bank briefcase but Big E with right hands as the referee calls for the bell.

Corbin pushes Big E onto the ring post as Corbin grabs the briefcase and runs through the WWE Universe.

We cut backstage and it’s Kayla Braxton with Bianca Belair. She asks Bianca about Sasha Banks and the contract signing last week.

Bianca tells her that just hearing the name Sasha makes her skin crawl. And all she can think about is what she will do to her. But she hopes Sasha is watching tonight for her to witness what she will do to Carmella and Zelina. She says she is done playing nice and now they will see the meanest, nastiest and baddest chick in WWE.

Out comes Seth Rollins to the ring. He tells Edge he likes his style as the fans chant “We want Edge” and Seth tells them that they already had Edge and now they have him. He says he respects what Edge had to say, he covered all of his bases, spouted off every excuse in the book for why he is going to lose to him at SummerSlam.

The fans chant “You suck” as Seth tells Edge that there’s no shame in not being able to find the darkness that once guided him. But without that, Edge cannot get on his level. Seth says they both know that part of Edge is dead and gone.

The Brood’s theme plays as the arena fills with red and black. Edge shows up on the screen and he tells Seth to take care and be ware because the freaks come out at night. Black liquid drops from the ceiling and onto Seth in the ring.

Ford gets in the ring and Ford with right hands and a kick to the side of the head. Ford on the ring apron as Gable gets in Angelo’s face, Dawkins throws Gable into the ring. Ford with a cross body on Otis. He goes for the cover but Otis kicks out. Ford runs to the ropes but Otis knocks him down. Otis climbs the second rope and a big splash. He goes for the cover and gets the pin.

The bell rings and we are under way. Boogs takes Crews down as he lifts Apollo up and drops him. He runs towards Apollo but Apollo with a kick to the face as he throw Rick shoulder first into the turnbuckle. He goes for the cover but Boogs kicks out.

Nakamura with a kick to the face and Boogs is tagged in. Boogs with an abdominal stretch as Nakamura takes Azeez out on theoutside. Boogs ifts Apollo up and slams him. He goes for the cover and gets the pin.

The bell rings and we are under way. Bianca with a shoulder block takes Zelina down. She throws Zelina in the corner and right hands and kicks by Bianca. She lifts Vega up but Zelina lands on her feet. Carmella gets on the ring apron as that distracts Bianca. Vega with a sunset flip, she goes for the cover but Bianca kicks out.

Zelina climbs the second rope as she jumps but Bianca catches her. Bianca lifts her up and a power bomb. She lifts Zelina back up and throws her onto the turnbuckle. Bianca lifts Zelina up and hits her with the KOD. She goes for the cover and gets the pin.

As Bianca is celebrating, Carmella hits her with a super kick.

Roman’s music hits as he makes his way down to the ring with Paul Heyman. He gets in the ring and John Cena’s music hits. He runs down to the ring. Roman begins to speak as fans boo, he says a lot of people will say a lot of stupid things to him and that’s exactly what John did last week. He tells Cena he came out and said a lot of dumb stuff and they reacted because they got excited and believed him.

Reigns says it’s great but he’s not going to allow Cena to lie. He says Cena mentioned that he can pin him 1, 2, 3. He asks Heyman when was the last time he lost. Heyman says no one has ever beaten this Roman Reigns.

Cena says he won’t let this go on, there’s too much excitement. He sys at SummerSlam, all eyes will be on this main event. But he loves that everybody knows what he believes which is the impossible is possible. He says everyone but Roman believes that. He came back a month ago and everyone was excited but if a month ago he asked people that these two would have a match, everyone would say Roman Reigns is going to win because Cena is going to film a movie. Cena says the movie part is right but the winning part is wrong.

He says what he will do is win the belt, go do the movie while Roman is embarrassed. Cena says he is not saying Roman is not great but he is protected in this bubble and he will bring him down to earth. He asks Roman if he is really that naive. He says Summer of Cena, a contract in a big blue sharpie. He is here to demote Roman and this is a match made for Cena. He tells people the same thing for 20 years, never give up. And the reason Roman is frustrated, that’s all he has to do. Just 1, 2, 3. If he makes a mistake, 1, 2, 3. If he’s not perfect, it’s 1, 2, 3. And at SummerSlam, 1, 2, 3, equals 17 championships for him.

Cena says tomorrow, the impossible becomes the possible thanks to Roman Reigns. Cena throws the microphone away as Roman smiles. Roman tells Cena he doesn’t get it. He’s trying to understand it, movies, premeirs, dress up, he gets it. Roman says he should have smartened himself up before he came back because when he smashes people, WWE gets rid of his opponents because they have no use for them anymore.

Roman says he can go to Hollywood, make movies and commercials. He says it’s Vegas, to raise the stakes. Either Roman is leaving that stadium as the Universal champion or he is leaving WWE. Roman extends his hand as Cena shakes it. Roman lifts Cena up but Cena lands on his feet and rolls Roman up. Cena gets out of the ring and celebrates.