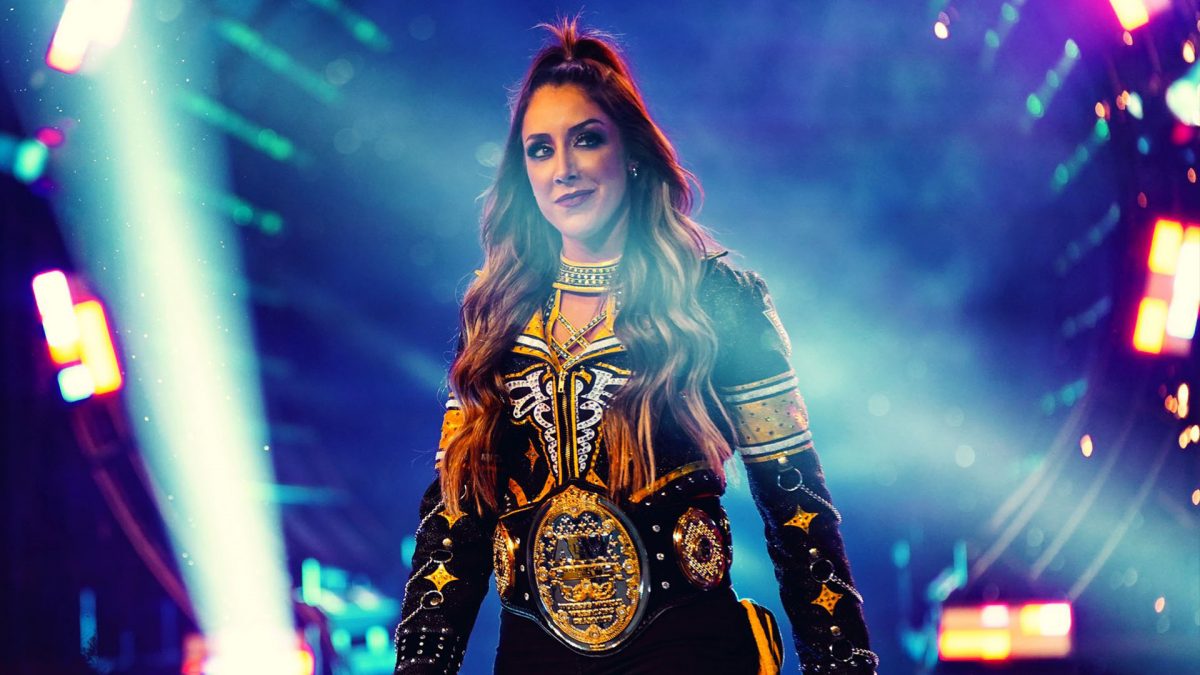 This past Wednesday’s episode of AEW Dynamite featured a backstage interview segment with Britt Baker. During the segment, Baker boasted about having a big exclusive free agency signing announcement for AEW, which was revealed to be herself after claiming she had signed a new contract extension with the company.

Fightful Select reported that their sources within the company stated that Baker’s comments were indeed true and she had signed recently signed a new deal with the company. It was reported that the length and terms of Baker’s extension deal are currently not known.

AEW reportedly is currently planning for this year’s Full Gear event to take place in early November in St. Louis, Missouri, according to the Wrestling Observer Newsletter.

Dave Meltzer reported in this week’s issue that AEW officials are currently planning a November 6th date for the event but he speculated that it could end up being changed due to very stiff sports competition that night. Meltzer reported that AEW’s Full Gear 2021 event would be going head-to-head against college football games, UFC’s planned UFC 268 event at Madison Square Garden, and the Canelo Alvarez vs. Caleb Plant headlined boxing event.

Meltzer also reported that AEW’s Full Gear event is also currently expected to be bumped from first tier to third tier pay-per-view slot for most PPV providers should they stick with the November 6th date.

AEW recently announced that Riho is the next official competitor for the Women’s Casino Battle Royale match at their upcoming All Out 2021 event on September 5th in Hoffman Estates, Illinois.

The Chris Jericho Cruise recently announced that all crew members, talent, and guests who will be attending the upcoming Rock N Wrestling Rager Triple Whammy Cruise event must show proof of vaccination in order to be allowed on the trip.

AEW recently announced that due to the current COVID-19 guidelines in New York City, those who purchased tickets or are interested in attending their upcoming Grand Slam Dynamite show at the Arthur Ashe Stadium must show proof of vaccination in order to be allowed inside the venue. The company also stated that face masks will be required to be worn at all times should the venue’s roof be closed for the event.

Sports Illustrated held a recent interview with Chris Jericho and one of the topics discussed included his thoughts on his recent “Five Labours of Jericho” matches. Jericho stated:

“I started with Spears, so people would assume I was going to wrestle all of The Pinnacle. Then we threw in the Nick Gage surprise, and everybody flipped out. We went into my past with Juvy. So then people were thinking it was going to be all about past opponents, and maybe you’d see someone like Lance Storm, but then we went to Wardlow. That was so important to the story—Wardlow betrayed me and powerbombed me off the stage last March. He’s going to be a very important part of AEW’s future. And then I had my match with MJF, and people thought I was going to beat him, but I didn’t. You never know what is going to happen with my stories. I’m not going to do what people expect.”