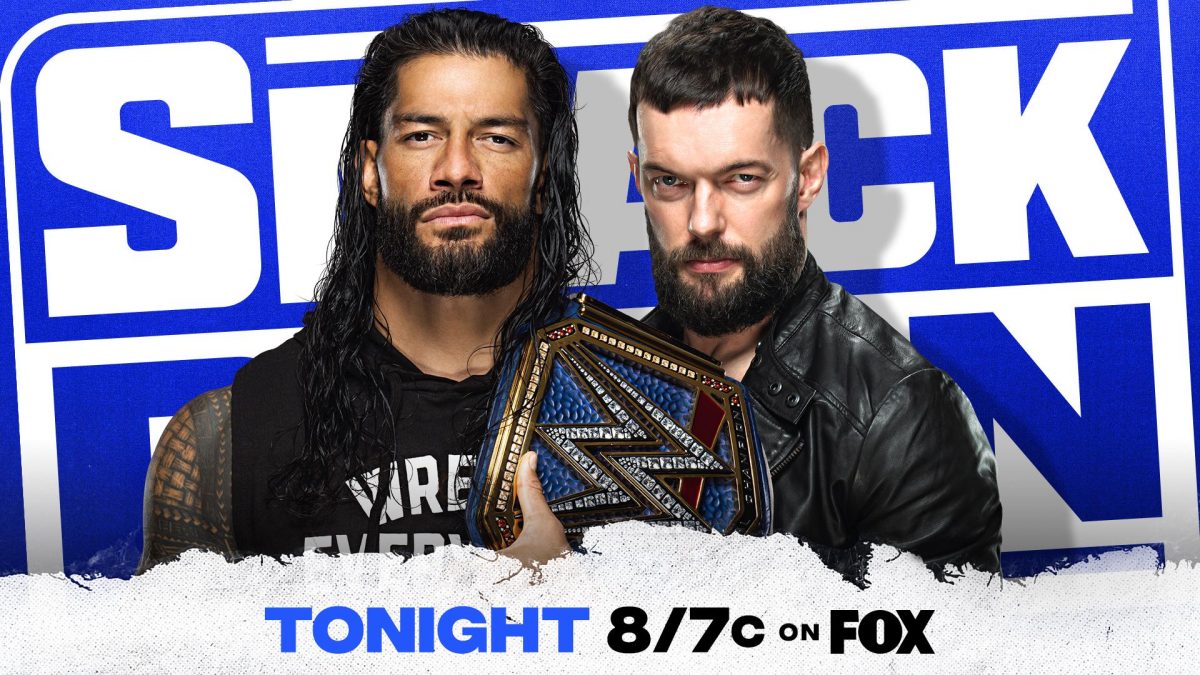 The Usos vs. The Street Profits

WWE SmackDown kicks off with The Usos walking down to the ring. They say the bloodline is now in their city. They ask about last week and why would The Street Profits involve themselves in family business. They say that they disrespected the head of the table and the bloodline.

Out come The Street Profits. They talk about how they embarrassed The Usos in front of the head of the table last week. They ask The Usos what they’re doing in the ring without their permission slips.

The bell rings and we are under way. Dawkins and Jimmy are in he ring and a shoulder block by Jimmy takes Dawkins down. Dawkins gets up and hits him with a drop kick. A spinning corkscrew by Dawkins and Ford is tagged in. They double team Jimmy and in comes Jey and he gets hit with a drop kick. Both Usos to the outside and Ford with a cross body off the ring apron but they catch him and slam him into the barricade.

Back from commercial, Roman Reigns is watching the match backstage with Paul Heyman. Dawkins and Jey are tagged in. Jey with a Samoan drop. He goes for the cover but Dawkins kicks out. Jimmy is tagged in. They place Dawkins on the top rope but Dawkins knocks them both down. Dawkins jumps off the top rope, Jimmy moves out of the way and hits him with a kick to the side of the head. Ford is tagged in as Dawkins knocks Jey down. Ford with a frog splash off the top rope. He goes for the cover but Jimmy breaks it up.

Jimmy throws Ford shoulder first into the post. He throws Ford once more in the ring post as the referee calls for the bell.

Winners: By disqualification, The Street Profits

The Usos attack Dawkins after the match, throwing him in the ring steps. Ford flies over the top rope onto The Usos on the outside.

We see Roman backstage who tells Heyman to bring him his cousins. Heyman walks out and in comes Kayla Braxton. She tells him there’s a lot going on tonight. Heyman tells her she needs to enjoy the moment. She’s on world wide television every Friday night and Heyman’s phone starts to ring as it’s Brock Lesnar’s theme song.

He begins talking again as Brock’s music plays again and Heyman answers his phone. He tells him he doesn’t have a lot of privacy as he starts to talk. He says he will deliver the message. Kayla tells him he is right, she is definitely enjoying this moment.

Heyman bumps into Big E who is dressed as a janitor. He has his Money in the Bank briefcase as he starts to laugh.

Out comes Becky Lynch to the ring. A loud “Becky” chant from the crowd. She says the Man has come around to Jacksonville. Becky says she walked down to the ring last week and did not get a you deserve it chant as some fans begin to chant. She says that’s what she’s talking about, she should have been here last week.

Becky says she was interrupted by practically the entire women’s locker room. But she didn’t get to talk about Bianca Belair. She says Bianca is a great athlete, probably the most athletic woman ever in WWE and is the only woman, other than herself, to win at the main event of WrestleMania. She says she wanted to go one on one against her at SummerSlam and somehow she is portrayed as the bad guy.

Lynch says her return saved Bianca’s match at SummerSlam. When Sasha went out last minute, the higher powers called the biggest person they know. Becky says Bianca wasn’t ready and that’s Bianca’s fault. And because she hasn’t played this game in a while does not mean she has forgotten how to win. And she can call herself the EST of WWE and pretend that she is the best but they both know that is a lie.

Out comes Bianca Belair to the ring. The fans chant “EST” as she tells Becky that the championship was more to her than just a title. it was a part of her for 132 days. And that moment of SummerSlam keeps replaying in her head. She came so far and accomplished so much and lost it all in 26 seconds. But she’s not afraid to admit that she was embarrassed and it still hurts. But that’s the truth and what she won’t do is build herself up while putting another woman down. And she will never make excuses for herself.

Bianca says Becky is talking about her as if she knows her but she doesn’t. Becky wouldn’t give her the rematch and she had to go out and earn it which is what she does. Bianca mentions that Roman is defending his title tonight and she asks Becky to do the same tonight. Becky laughs and says she doesn’t care what Roman Reigns does and no. She throws the microphone and leaves the ring.

Dolph Ziggler is walking backstage with Robert Roode. He walks by Toni Storm and he tells Roode to keep walking, he needs a minute. He talks to Toni Storm and asks her if she will watch his match tonight and she says she will. He asks her if she wants a front row seat for his match tonight. She says she is kind of rooting for Rick Boogs. Ziggler says they’re all rooting for Boogs and that he’ll see her around.

The bell rings and we are under way. A back breaker by Cesaro as Seth rolls to the outside of the ring. Cesaro to the outside and he uppercuts Rollins into the barricade. Cesaro slams Seth into the barricade and into the ring. Cesaro to the ropes but a drop kick by Seth. A chop to the chest by Seth as he runs to the ropes and a drop kick by Cesaro. He drops Seth and goes for the swing but Seth grabs the ropes. Cesaro with an uppercut and Seth grabs the ropes. Seth with a jumping DDT. He goes for the cover but Cesaro kicks out.

Seth hits Cesaro with the chair after the match and throws him into the ring post. Seth grabs a chair and breaks a piece of it. He gets the crossface on Cesaro using the metal part of the chair. Seth hits him with the curb stomp. He goes to hit him with the conchairto but out comes Edge as Seth rolls out of the ring.

.@WWERomanReigns has a lot to think about with news of @BrockLesnar at @TheGarden next week for #SmackDown! pic.twitter.com/Vr7YNqR2pW

We cut to Baron Corbin who is seen entering the arena in a Rolls Royce. He hands the keys over to a new backstage interviewer and tells her to be careful with his car.

Edge is walking backstage as Kayla says that he was done with Seth. Edge says he thought they were but he knows the game Seth is playing and it’s a dangerous one. He says what happened to Cesaro has to stop. He challenges Seth to a match on SmackDown next week.

Kevin Owens is in the ring and he introduces Baron Corbin as Happy Corbin. Out comes Corbin and he says he is happy to be on the Kevin Owens show. Both men sit down. Corbin thanks Kevin as he says if it wasn’t for him, he would not be wearing a 3000$ suit, a watch and he would not have stolen Big E’s Money in the Bank suitcase.

Owens tells him he won’t put any of this on him. Corbin says he knows why Owens is mad. He wants his 100$ back but he left his money in his Rolls Royce. But his special guest might have it. Owens asks him what special guest as Corbin introduces Logan Paul.

Logan walks down to the ring as he thanks Owens for having him on his show. Owens says he didn’t invite him. He wouldn’t put these poor people through that. He says after Corbin lost to Big E at SummerSlam, Logan called him something. Corbin says he took it as a compliment. Logan says they’re all good and last week, after his brother defeated Woodley, they hung out. Owens says that sounds like the worst time ever.

Owens says they have a lot in common. He calls Corbin one of the most self-centered, egotistical and most useless piece of trash to ever step foot in a ring, Logan Paul and Baron Corbin is here to. Logan asks him if he wants to talk to someone who is about to give him 100$ because Owens looks like he could use it more than he does. Owens says he doesn’t need his money. What he needs is for Logan to leave the ring, leave to the back and to never show his face again.

Logan pushes Owens as Owens pushes him back. Corbin knocks Owens down and hits him with a chokeslam. Logan throws him the $100 and tells him he is not that guy.

Carmella is shown posing for the camera backstage, and Liv Morgan is shown behind her watching.

The bell rings and we are under way. Dominik with a few reversals but Sami slams him down. He goes for the cover but Dominik kicks out. Sami hits him with a clothesline. Dominik back up and he knocks Sami down as Sami goes to the outside. Sami starts to walk to the back but out comes Rey. Dominik flies over the top rope and onto Sami. Rey tells Sami to throw Sami back in the ring. Dominik throws Sami back in the ring. Dominik gets in the ring as Sami hits him with the Helluva Kick. He goes for the cover and gets the pin.

Sonya is backstage talking on the phone as Naomi cuts her off. She mentions how Sonya last week told her to speak to her this week to know about her match. Sonya says she must have forgotten as she walks away.

Finn Balor is backstage as Kayla asks him about his match. Finn says for five years, people have been asking him about what would have happened had he not gotten injured when he was champion. He says tonight he will answer.

Finn is in the ring as The Usos attack him before the match. They hit him with the steel steps. They throw Finn back in the ring and out come The Street Profits as The Usos jump over the barricade.

Out comes Roman Reigns to the ring. The bell rings and we are under way. Roman throws Finn across the ring. He stomps on Balor in the corner. Roman sends Balor to the ropes but Balor with the sling blade. Finn runs towards Roman but a right hand knocks him down. Roman slams Balor onto the mat. He goes for the cover but Balor kicks out.