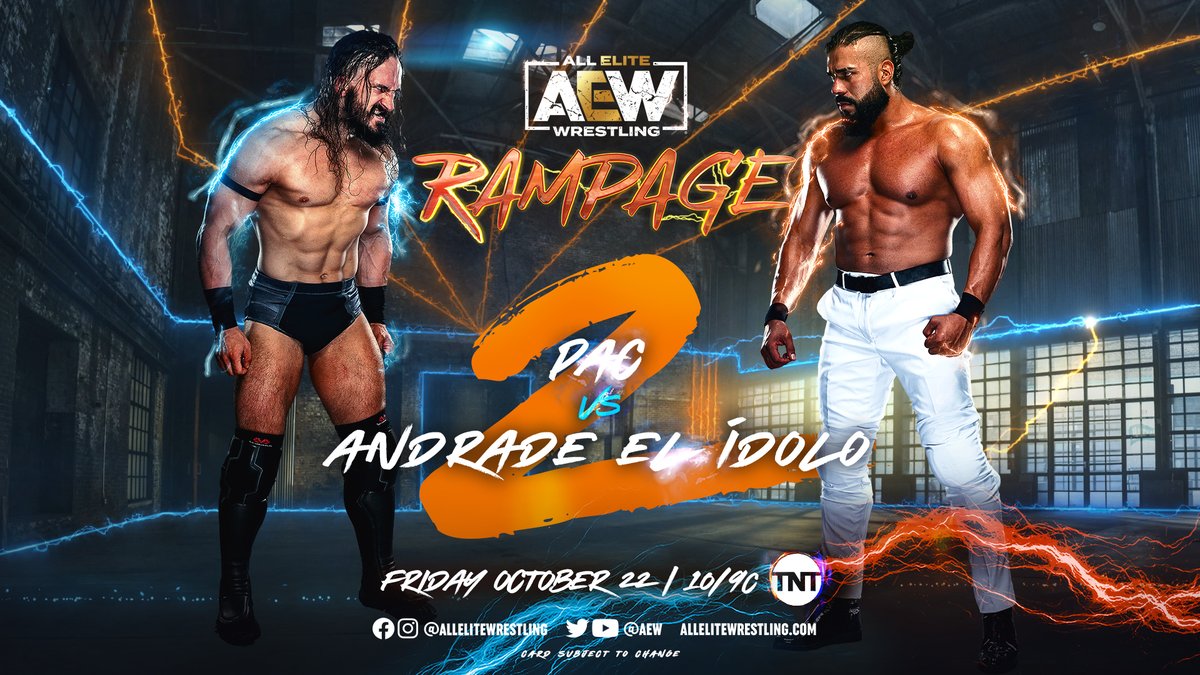 The bell sounds and we’re off-and-running with this one, and already Taz and Starks are showing favoritism to their fellow Team Taz member on commentary. Cassidy goes for an Orange Punch straight out of the gate, however Hobbs avoids it and hits a big spinebuster for a near fall.

“Big Money” Matt Hardy continues to be shown at ringside while Hobbs works over Cassidy, controlling the action early on in this one. The commentators keep reminding us that Hardy injured Cassidy’s ribs in the Casino Ladder Match, as Cassidy still has his ribs taped up as he is working this match.

Hobbs continues to beat Cassidy down in the ring, cutting off a comeback attempt from the fan-favorite before we head to a mid-match commercial break as the action continues in this first round tournament bout here on Rampage.

When we return from the break, we see Hobbs still in control of things when Cassidy tries firing up for a comeback. He comes flying off the top but Hobbs catches him and puts him in a torture wrack. Cassidy tries fighting his way out and does, but Hobbs continues to beat him down.

The ref keeps threatening for Hobbs for not breaking on the count of five in the corner. Hobbs loses his cool and picks the ref up and walks him across the ring in frustration. While this is going on, Hook jumps on the apron to tell him to calm down. The ref pushes Hobbs. Hobbs is distracted by all of this and Cassidy runs up behind him and gets him in the Mouse Trap to finish this one off. With the victory, Cassidy advances to the next round of the AEW World Title Eliminator Tournament.

After this week’s opening contest wraps up, we see Tony Schiavone in the ring and he introduces his guest at this time — one-half of the AEW World Tag-Team Champions — Penta El Zero Miedo. Out he comes accompanied by his translator, Alex Abrahantes.

The two settle into the ring and their music cuts off. As Schiavone asks them his first question, Penta notices two people in the crowd that look like the frog masked tag-team that FTR portrayed in their match to beat he and Rey Fenix for the AAA Tag-Team Championships.

Penta heads out to deal with these fans and yanks their masks off only to discover that it is two regular fans. Then out of nowhere, FTR attacks him from behind.

They bring him in the ring and beat him down and then take the AEW Tag-Team Titles and raise them along with their newly won AAA Tag-Team Titles. Out comes PAC to run off FTR and then we head to another commercial break.

Anna Jay’s theme music hits and out comes the women’s division competitor. She settles into the ring and her music dies down.

Now the familiar sounds of Dr. Britt Baker’s theme hits and out comes the AEW Women’s Champion accompanied by Rebel and Jamie Hayter.

The bell sounds and we’re off-and-running with this one. Jay and Baker exchange some big spots straight out of the gate, with Baker even going for her lockjaw finisher early into the contest.

Things finally settle in a bit and we see Jay get a nice run of offense before Baker takes over, winks at the camera in the process, and we hear her cronies at ringside jawing at Jay while she is on the receiving end of a beatdown from the women’s champion in this non-title affair as we head to a mid-match commercial break.

We’re back from the break and we see Baker still dominating the action. She even gets the glove as she’s apparently ready to finish off Jay with lockjaw. Jay avoids it and ends up hitting a DDT to shift things back into her favor. She goes for her Queenslayer spot but Baker avoids it as well.

Now we see Rebel and Hayter both start to try and get involved. Jay ultimately gets them out of the picture, knocking them off the apron and then eventually applying her Queenslayer to Baker. It seemed like she had the champ finished off in this non-title grudge match, but then Baker finally makes it to the ropes. After that she blasts Jay with a super kick and then gets her in the Lockjaw for the win.

When the match wraps up, we see Baker not satisfied so she slaps the lockjaw back on Jay and pulls back on her, yanking at her tongue until finally Jay’s friend Tay Conti runs out and makes the save. She clears the ring of Baker, Hayter and Rebel and then poses with Baker’s AEW Women’s Championship from inside the ring.

We find out NEXT on #AEWRampage pic.twitter.com/g35G89QKik

We return to see Tony Schiavone doing a pre-main event backstage interview with tonight’s headline competitors. “The Bastard” PAC and Andrade El Idolo both deliver their basic pre-match comments and then we head to another commercial with our highly-anticipated rematch between these two waiting for us on the other side of the break.

Within the first minute, PAC blasts El Idolo with a variety of kicks before suplexing him and hitting a big high spot that pops the crowd, and the commentary team. Back in the ring, PAC continues to dominate the action as the fans in Miami cheer him on.

PAC takes a big shot from El Idolo in the corner of the ring that shifts the momentum into Andrade’s favor for the first time in the contest. He dumps PAC out on the floor at ringside and then leaps and jumps off the top-rope in the corner, spinning on the way down as he splashes onto PAC on the floor.

El Idolo hits another big high spot and then brings the action back into the ring, going to work on PAC as we head to a mid-match, picture-in-picture commercial break as our main event continues.

We’re back from the break and we see El Idolo still in control of things, but not for long, as “The Bastard” starts to shift the momentum back in his favor. El Idolo goes to cut him off again but when he goes for an overzealous leg drop on the ring apron, PAC moves and El Idolo slingshots into a crash-and-burn-landing on the leg drop attempt.

After watching some replays of El Idolo’s rough landing, we return to the action and see PAC run the ring apron before leaping off and taking El Idolo into the steel barricade with a hurricanrana off the apron onto the floor. The fans respond with a loud “Holy sh*t! Holy sh*t!” chant.

PAC heads up to the top-rope after this and waits for El Idolo to get back to his feet before launching himself off backwards for a big moonsault to the floor that connects. The fans go nuts for this and then we see some spectacular immediate replays of that crazy high spot as well.

A couple more high spots later and we see PAC go for the brutalizer in the ring on El Idolo, only for El Idolo to make it to the ropes to force the hold to be broken. PAC goes to pick El Idolo up but El Idolo drops him down throat-first over the top-rope. He picks PAC up from the other side of the ring ropes on the ring apron. He goes for a suplex to the floor but PAC knees him on the way up and over, and lands on his feet on the other side of the ropes on the ring apron as well.

El Idolo and PAC battle back-and-forth on the ring apron and then El Idolo hits a reverse DDT into a spinning elbow to the throat on the hard part of the ring apron. We see El Idolo go for and connect a springboard DDT on the hard part of the apron as well. Both guys crash out on the floor afterwards and we enjoy some cool replays of that spot as well as the commentators put over the action and the fans respond with another loud “Holy sh*t! Holy sh*t!” chant.

Back in the ring, El Idolo heads to the top-rope again and is looking to do something crazy off the top, only to slip and brutally crotch himself on the top turnbuckle. PAC ends up climbing up there with him and is looking for a top-rope superplex. He hits what was actually a top-rope brainbuster instead, which looked insane. PAC goes for the cover afterwards but El Idolo manages to kick out after the count of two.

The two exchange some more back-and-forth action back inside the ring and then PAC hits a poisonrana. El Idolo comes off the ring with a big kick and is looking for the hammerlock flatliner. PAC sits down and rolls him up instead. El Idolo reverses and covers PAC but PAC kicks out. Now we see another quick roll up out of nowhere and this time PAC gets the pin fall victory.

Literally the second the pin happens, the lights in the building go out.

When the lights come back on, we see Malakai Black standing in the ring. He turns to PAC and sprays him in the eyes with the green mist. El Idolo watches on and then he goes to work on PAC as Black goes out to the ringside area, reaching under the ring and pulling out a steel chair. He heads back into the ring with the chair and is about to double-team PAC with El Idolo.

Instead, out comes Arn Anderson and he stops and goes a glock / gun gesture and then Cody Rhodes hits the ring from behind and starts beating down El Idolo and Black by himself as the fans chant “Cody! Cody! Cody!” He grabs the chair and waits for Black to get up, but Black sees him and ducks out the back door and retreats as Cody stands tall in the ring. The commentators plug Cody-Malakai Black 3 for Dynamite tomorrow night and that’s how this week’s show goes off the air.