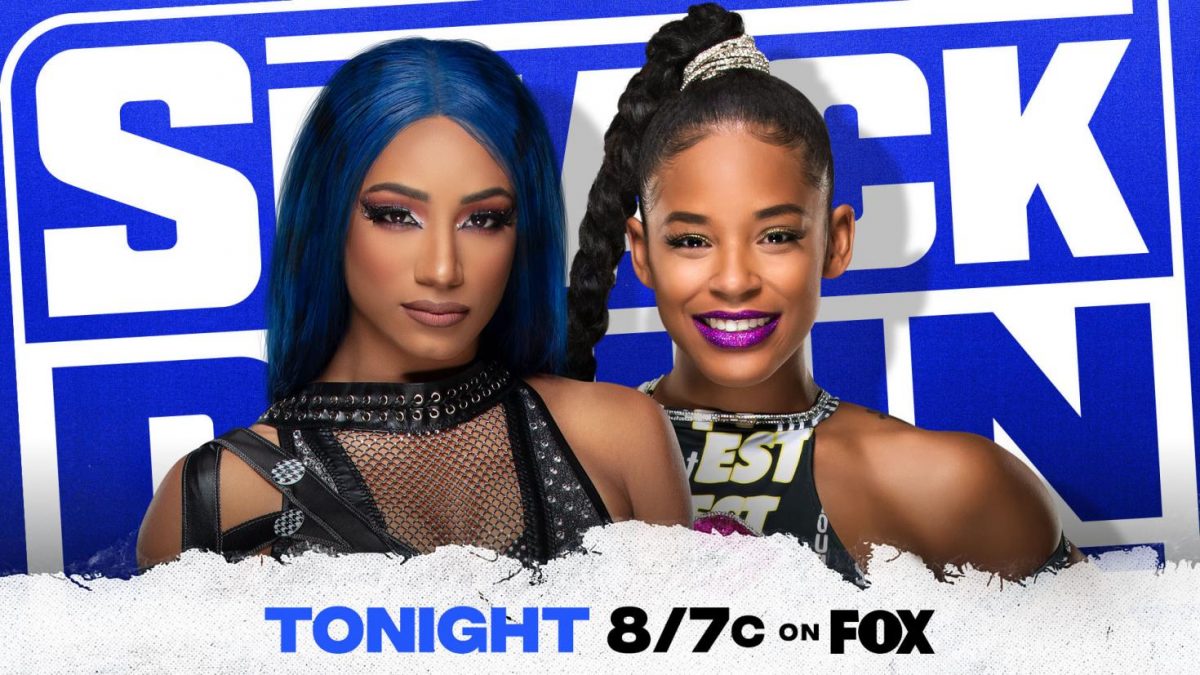 Results by: Roy Nemer of Wrestleview.com

WWE SmackDown kicks off with Sonya Deville and Adam Pearce out on stage. Pearce says stars from Raw and SmackDown are there tonight.

Out comes Roman Reigns to the ring with Paul Heyman. They show clips of Roman Reigns against Finn Balor from Extreme Rules.

Roman Reigns says he is number one and he tells Baltimore to acknowledge him. The fans cheer as Heyman says that was not loud enough for the Tribal Chief. He says it doesn’t surprise him that people from BaltiMorons would do that. He says before Extreme Rules, you had to say the undefeated demon but now you can’t say that anymore because that demon went one on one against an exorcist named Roman Reigns.

Heyman says but like a shark that circles around the island of relevancy, this shark only swims looking forward. And what this shark looks forward to is Crown Jewel. Heyman says it will not be held in Suplex City because that beast will come up against the suplexercist, Roman Reigns. Heyman says Roman will remain the Universal champion and he will smash at Crown Jewel, Brock Lesnar.

Brock’s music hits and he comes down to the ring. Both men are in the ring and a right hand by Roman but Lesnar with a German suplex. He grabs Roman and another suplex and in come The Usos as Lesnar knocks them down. Roman slides to the outside. Brock hits The Usos with an F5 each.

Kayla is backstage with Charlotte as Charlotte tells Kayla that she should congratulate her for being the first woman drafted. She says long live the queen and walks away.

The bell rings and we are under way. Owens with a right hand onto Corbin. Owens stomping on him in the corner and Corbin back up as Owens clotheslines him to the outside. Owens chases Corbin to the outside, Corbin gets in the ring and Owens on the ring apron is tripped up by Madcap Moss.

Adam Pearce and Sonya Deville are on stage for the draft. 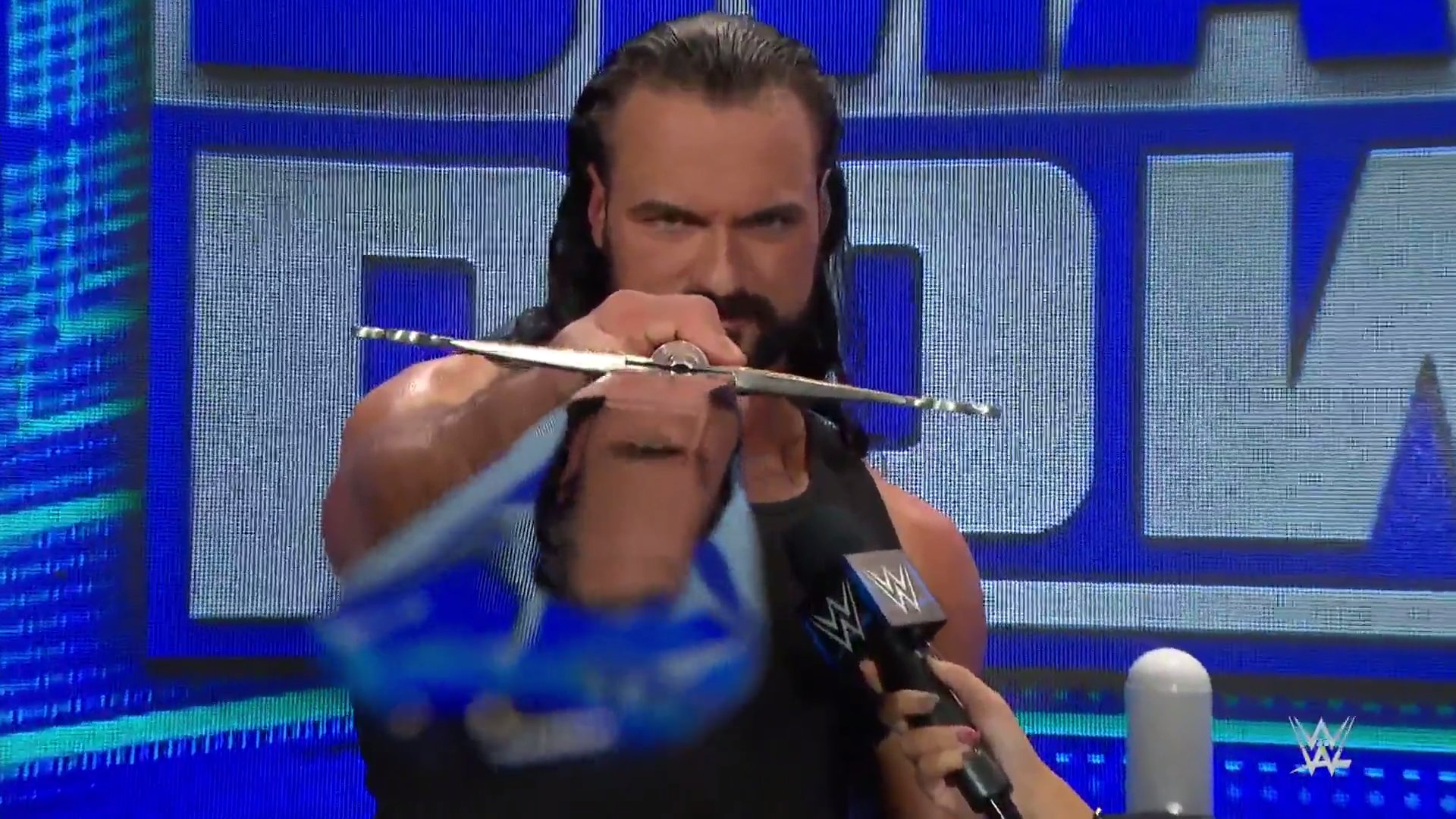 Kayla is backstage with Drew McIntyre. He says he did a lot on Raw but he is now on SmackDown. And he is here to flip the table on SmackDown as he points his sword to the camera and says he is after the Universal championship.

Edge makes his way down to the ring. He says earlier today he was thinking and he is the only talent here that was on the first episode of SmackDown. And because of that, SmackDown has always felt like his home. But he has been drafted to Raw. He says he is excited about it, new opponents and a challenge. He says that brings him to Seth Rollins.

He says that Seth hit his stomp on him three weeks ago. And every week since, he has challenged him to another match. Edge says Seth knows he is not cleared yet, he also knows that if he accepts that challenge, Seth walks into that match with an advantage. But he knows what kind of a man he is and he has to accept that challenge. Edge says he is on his way to being cleared and Seth wants him to admit that he is better than him in each and every way. Edge calls Seth out to the ring.

Seth is shown on the big screen laughing. He tells Edge that he is impressed. Seth says Edge isn’t saying the things that he needs him to say. He’s not announcing his retirement, he is not telling the world that he is not Edge light and he is not answering his challenge. Seth says he tends not to believe a single word that Edge ever says, he calls Edge a liar. He says he is not at SmackDown, he is at Edge’s house.

We see Seth standing in front of Edge’s house as Edge runs to the back. Seth knocks on the door and the door is unlocked as Seth walks in. Seth asks for Beth as Seth says uncle Sethy is here. He tells Edge he knows he lives in the middle of no where but to lock his doors. Seth opens the fridge and grarbs some snacks. Seth sits at the table and puts his feet on it.

Seth says this place was hard to find. He looks and see drawings made by his kids. Seth says he knows they are young but that is rotten. Seth walks around the house and sees a picture of Edge, Beth and their kids. Seth says his daughters are gorgeous and it’s good they look like Beth. Seth sits down on a chair and turns on the fire place.

We cut to Edge talking on the phone as he tells Beth to go to her brother’s place because Seth is at their house.

Carmella and Liv Morgan are in the ring for their scheduled match. Liv attacks Carmella before the start of the match as Carmella gets out of the ring. She tells Liv that is the last time she will try to hurt her. Carmella gets a face mask on as she enters the ring.

Carmella gets in the ring as the referee gets in the way and Carmella attacks Liv. She takes her mask off and celebrates.

Sonya Deville and Adam Pearce are back on stage.

Ford back up as he sens Gable to the ropes but Otis is tagged in. Ford with a body drop on Gable. Ford knocks them all off the ring apron. Gable is thrown to the outside. Ford on the ring apron as he jumps but Otis catches him and slams him into the ring apron. Otis throws Ford into the barricade.

Back from commercial, Gable with a cove but Ford kicks out. Gable trips Ford up and Ziggler is tagged in. Ford with a kick to the side of the head. Dawkins is tagged in as is Roode. Dawkins knocks Roode down. In comes Gable but he is thrown around. Dawkins with a spinning neck breaker. He goes for the cover but Otis breaks it up. Woods gets in the ring but Otis knocks him down.

Winners: The New Day and The Street Profits

Adam Pearce and Sonya Deville are on stage.

Roman tells The Usos that he wants them to go with Heyman and makes it clear he wants them drafted to SmackDown. And if they aren’t, to leave Heyman for dead on Raw.

Out comes Becky Lynch and she joins the commentary team.

Charlotte Flair gets in the ring and knocks down both Sasha Banks and Bianca Belair.