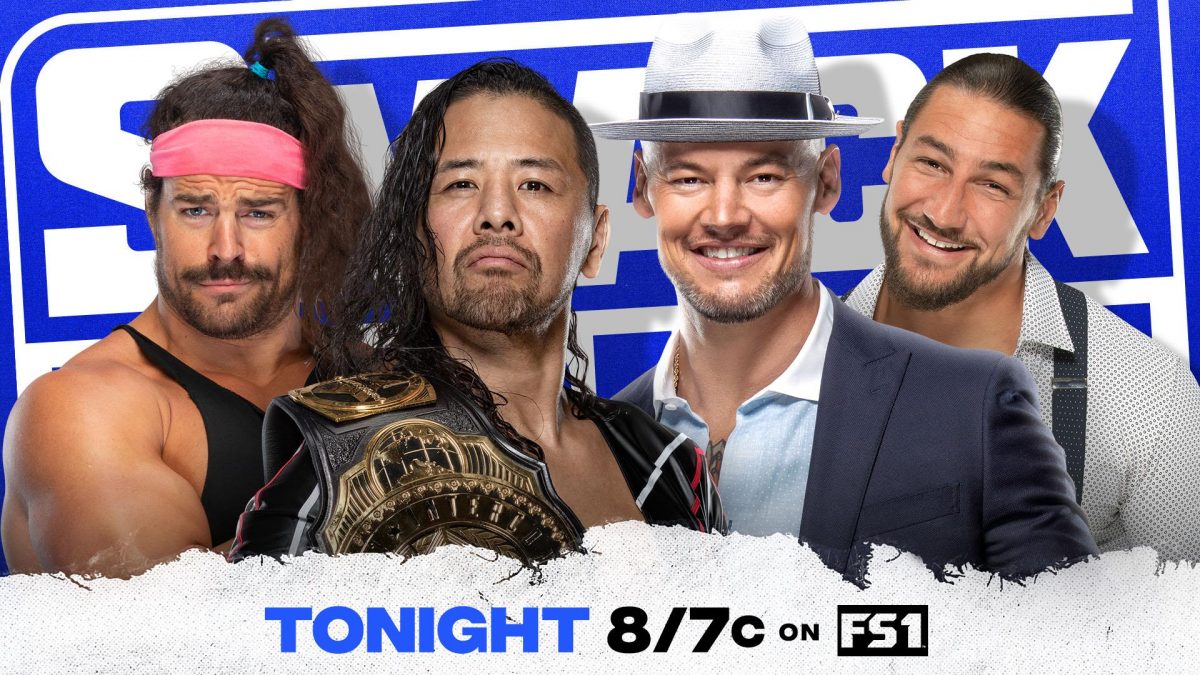 WWE SmackDown kicks off with Charlotte Flair making her way down to the ring. Flair says as more things change, the more things stay the same. Charlotte Flair, the SmackDown women’s champion. She says that’s six times but she’s not keeping count because that’s what everyone else does because no one can do what she can do.

Flair says she is not only the face of the division but the face of the company. Flair says no one is going to change that. When anyone else wins the title, they say this is the biggest day of their life and everyone celebrates them. But when Charlotte Flair wins a title, it’s just another Friday. She says after last week’s drama, order has been restored and that’s what these women need. They need a real leader, a mentor, someone to guide them, someone to bring out the best in them and that’s her.

Out comes Sasha Banks to the ring. Banks laughs and says no one is buying that she’s a leader. She says Flair doesn’t care about helping any one, she only cares about holding them down. She asks when her SmackDown championship match is as Charlotte says this is the new era of SmackDown. Flair says everyone knows that Sasha thinks she deserves a title opportunity but that’s a little selfish.

Flair says she has given her chance after chance and she always beats her. Flair says she spoke to Sonya and a new face deserves a contender championship opportunity. Sasha asks Charlotte if she’s scared.

Out comes Shotzi to the ring. Shotzi tells Charlotte if she’s looking for someone that she has never faced before, she is her girl. Flair points to the crowd as they chant Shotzi and Flair says Shotzi must be ready for battle. Flair says she will get her match.

Both women back up and a double kick to the body by Flair. She throws Shotzi in the corner. Flair lifts Shotzi up but Shotzi lands on her feet and kicks Flair away. Shotzi jumps off the second rope and an arm drag. A drop kick by Shotzi. She goes for the cover but Flair kicks out. Right hands by Shotzi and a back elbow. She climbs the second rope but Flair trips her up. Flair goes for the cover but Shotzi kicks out. Right hands by Flair as she chokes Shotzi on the second rope.

Sasha and Flair argue on the outside as Shotzi goes for a suicide dive and knocks Flair down. 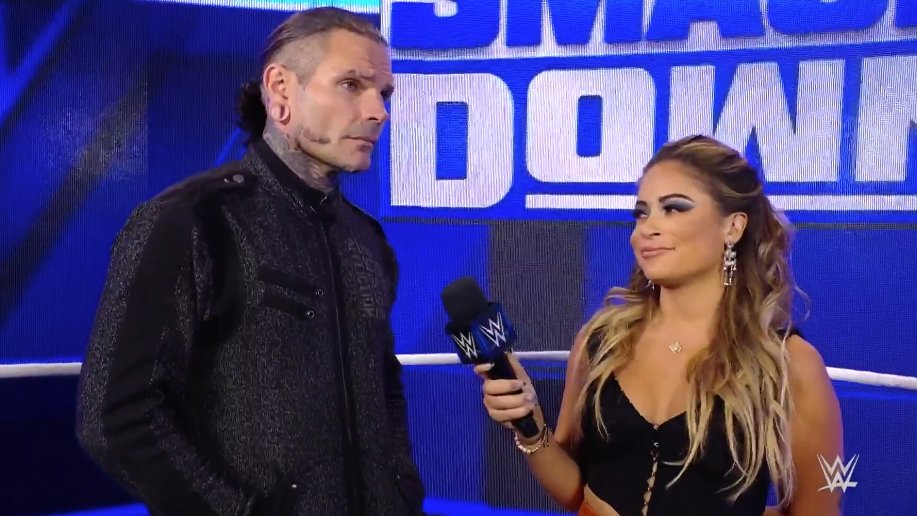 Kayla is backstage with Jeff Hardy. He says this will be a fresh start for him and maybe even challenge for a title he has never held before. In come Corbin and Madcap Moss laughing. Corbin says he is winning and winning in life. He talks about how they will win tonight as Madcap Moss tells a bad joke.

Adam Pearce is shown in his office in a pre-recorded video. He says Lesnar’s actions last week were disgusting. He says he will not be disrespected. We see Paul Heyman watching in the arena. Pearce says that cannot and will not happen again. He says he spoke to Lesnar earlier and told him that due to his actions and in addition to a suspension, he is fining him $1 million.

Heyman is standing watching and in comes Kayla. He turns around as she asks him how he thinks Lesnar will respond. Heyman says her timing is impeccable. He knows how the Tribal Chief would respond, Roman, suspended or not, would still show up and break everything and every one. But Roman doesn’t have to do that because Roman smashed Brock Lesnar at Crown Jewel.

Ali tells Drew they get it, Drew is big, he is bad but Ali is better. He says he has more athletic talent in his pinky than Drew does in his entire body. Ali says he is quicker, more agile and when it comes to in ring talent, Drew doesn’t compare. Ali says he will be the one who will defeat Drew tonight.

Ali grabs a microphone after the match. He says the fans choose to cheer for Drew McIntyre. They choose to root against him and the only reason is because his name is Mustafa Ali as he throws the microphone.

We cut backstage, Kofi Kingston and Xavier Woods are walking and they bump into Hit Row as Woods welcomes them to his kingdom. He says they did incredible in the ring last week. They bow down to Woods. Kofi tells them that they’re Hit Row, they can spit some of their hot fire to the Woods. They rap praising him.

In-Ring: The New Day, The Usos

Woods and Kofi Kingston are in the ring. Kofi says Hail King Woods as the fans chant Hail King Woods. He tells them that last week he received his cape, his scepter and Kofi Kingston was kind enough to place his crown atop his head, making him king. Woods says but a king is only as strong as the company he keeps. The fans chant you deserve it. Woods says he does, he did a lot of work to get there. He says Kofi’s heart is true, he is a pale and a confidant. He is his most trusted confidant. Kofi gets on one knee as Woods knights Kofi into Sir Kofi Kingston. Woods calls him the hand of the king.

Kofi gets to his feet and the fans chant Sir Kofi. Woods places a Unicorn pin onto Kofi as royal music plays. The fans chant New Day Rocks and out come The Usos. They said it’s The Usos and The New Day. They talk about how a lot changed since The New Day left, this is their show. You can call this the blood line show and they are the one’s.

The Usos says Halloween is on Sunday and asks them what they’re doing playing dress up. Kofi says they’re jealous because they look crispy clean while they have been wearing the same thing since 2018 as The Usos tell them they have new merchandise.

Woods says he can’t have the blood line on the royal carpet since he just got it cleaned. All four men argue. Woods says tonight it will be The Usos against The New Day in a trial by combat. The Usos accept the challenge. Woods lifts the scepter and they ask them if it’s real gold and if they can touch the scepter. Kofi slaps Jey’s arm away as they knock Kofi down and leave the ring.

Corbin hits Boogs with a kendo stick. He throws Boogs back in the ring. Reggie flies into the ring as he is chased by WWE superstars and to the back. on the outside, Boogs grabs an apple and throws it to Pat McAfee as they and Nakamura bite into apples.

Boogs hits them with the Halloween decoration on the outside of the ring. Boogs into the ring and he knocks both Corbin and Madcap down. Nakamura hits them with kendo sticks. They double team Corbin. Nakamura goes for the cover but Madcap breaks it up. A fall away slam onto Nakamura. Boogs throws Madcap down.

Corbin hits Boogs with the Deep Six and Nakamura knocks Corbin down with a kick to the face. Madcap places A pumpkin over Nakamura’s head and Corbin knocks him down. Corbin goes for a spear on Boogs but Boogs moves out of the way and Corbin hits shoulder first into the ring post. Nakamura and Corbin fight over the barricade. Boogs climbs the second rope and two men wearing Halloween costumes hit Boogs with kendo sticks. Madcap hits Boogs with a neck breaker. He goes for the cover and gets the pin.

The two men take their masks off and it’s Carrillo and Garza.

Megan Morant is backstage with Sonya Deville. She asks Sonya about Naomi’s match against Shayna. Sonya says there’s no bias about it. In comes Sami Zayn. He tells her it’s a mistake that Sami is not on the show and it was a huge mistake. He tells her she will need someone like him in her corner as the camera cuts to the ring.

There’s no referee and out comes Sonya. She tells Naomi she understands that there’s an issue but she came out here to say that the referee who was supposed to referee that match is injured. And she can’t think of anyone better suited to referee than herself. She asks if there’s a referee shirt and she is given a shirt.

The bell rings and we’re under way. Naomi rolls Shayna up but Shayna reverses it into a leg lock. Naomi with a kick to the face. Right hands by Naomi followed by a hurricanrana. Naomi throws Shayna face first into the turnbuckle. Naomi with a kick to the side of the head. Naomi goes to jump off the top rope and trips up. Shayna grabs Naomi but Naomi rolls her up and Sonya refuses to make the count. Shayna rolls Naomi up and Sonya with a fast count for the pin.

Naomi gets in Sonya’s face after the match but Shayna gets her in the Kirifuda Clutch.

The New Day are backstage and Kayla asks Woods if his reign is being threatened. He says he knows people will attack him but he has Kofi with him and nothing can go wrong. Kofi says he has been selected to protect him.

Naomi is backstage with Megan. She tells her if Sonya ever decides to take off her corporate suit, she will beat her up. And she will also beat up Shayna Baszler if they’re ever in a one on one match.

The Usos vs. The New Day

Back from commercial, Jey with a splash onto Kofi in the corner. Right hands by Jey as he goes for another splash but Kofi knocks him down. Jimmy and Woods are tagged in. Woods with a kick onto Jimmy. Woods with a Russian leg weep followed by a drop kick. He goes for the cover but Jimmy kicks out. A right hand by Woods followed by a chop to the chest.

Jey on the ring apron. Kofi knocks him down. Jimmy rolls him up but Kofi kicks out. Woods is tagged in. Jimmy hits Kofi with the super kick. Woods rolls Jimmy up and gets the pin.