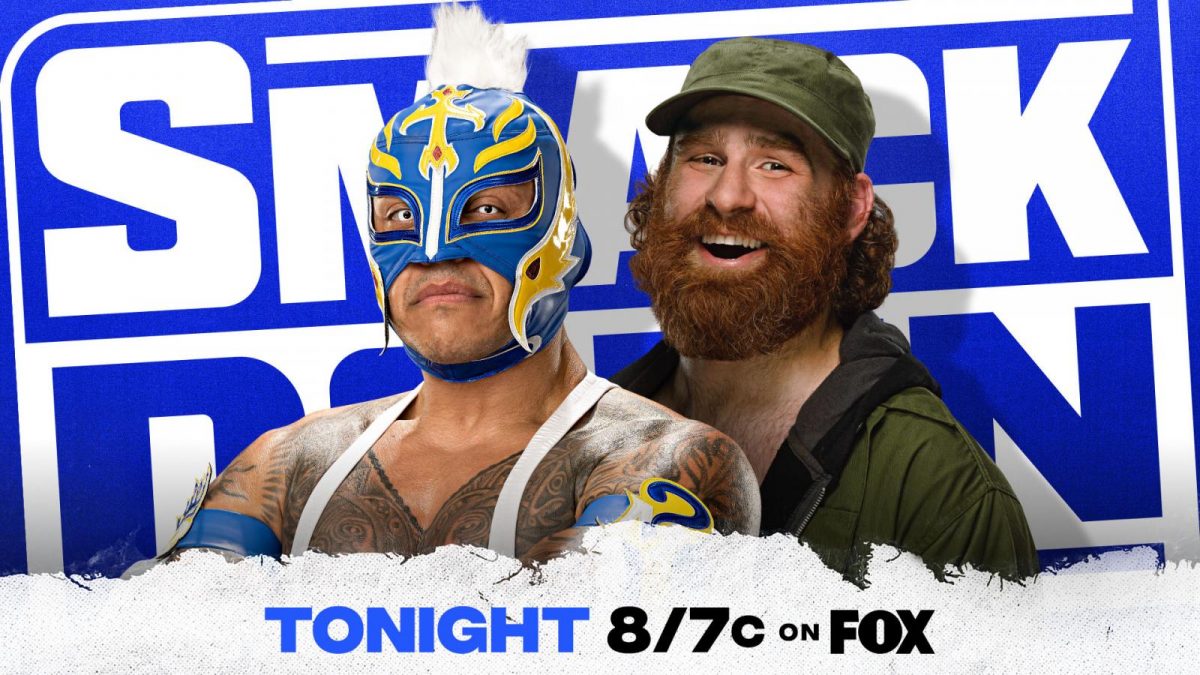 WWE SmackDown kicks off with Bianca Belair in the ring with a table in the ring. Becky Lynch is on one side of the ring sitting next to a table and Sasha Banks standing on the announce table. Adam Pearce and Sonya Deville are in the ring.

Becky says she decided to sit on the outside to get a good look at everything. She tells Bianca she is on a losing streak while Sasha couldn’t make it to SummerSlam. Sasha says her spotlight is bigger than the both of them combined. Bianca says the only thing that should happen right now is Sasha signing the contract. Bianca tells Becky that she was lucky and every big moment this year had her name in it.

Bianca says she is in the ring and now they don’t want to get in the ring. Bianca throws a chair to the outside and Becky flips the table. Sasha attacks Bianca from behind. Becky attacks Sasha and Bianca. All three women fight in the ring. Belair picks them both up on her shoulders but Sasha falls as Bianca knocks her onto the table. Bianca hits Becky with the KOD onto Sasha through the table.

We cut backstage with Rey and Dominik. In comes Kayla who asks Rey what it would mean to win the King of the Ring. He tells her next to being champion, it would be the best thing. He says it would make him sick if Sami Zayn became king and that’s not going to happen. Dominik tells Rey that he will stay backstage to watch the match. Rey isn’t too happy about it as he walks out to the ring.

After commercials, Sami approaches Dominik backstage. He tells Dominik that he has to be his own man and he thinks he is better than his father.

King of the Ring Tournament
Rey Mysterio vs. Sami Zayn

Rey gets Sami in the corner and right hands by Rey. An arm bar by Rey but Sami grabs Rey and throws him shoulder first into the ring post and Rey falls to the outside. Out comes Dominik.

Sami exposes the top turnbuckle. Dominik grabs it and puts the pad back on. Rey with a senton on Sami. Rey tells Dominik to get down as Sami pushes Rey into him. He rolls Rey up, goes for the cover and gets the pin.

Kayla is backstage with Seth Rollins. She asks him if he crossed the line last week after he broke into Edge’s house. Seth says up until SummerSlam, he was embarrassed, humiliated. After that he was mocked and ridiculed. But he still managed to beat Edge in a sanction match with a legal move. He was not celebrated for it. He was called a monster for it.

Seth says to throw it out the window. He was still the bigger man, he challenged Edge to a match. Edge didn’t respond. He says he did what any sane person would do, he told Edge he was going to go to his house and he went to his house to get an answer to his challenge. He says no, he did not cross any lines and he still has not gotten an answer to his challenge. He says the more he thins about it, he doesn’t know why he is talking to her about it. She has no power and he will go look for someone who does have power.

The bell rings and we are under way. A snap mare by Storm and Zelina back up. Zelina with right hands and a knee to the face. She goes for the cover but Storm kicks out. Storm with right hands. followed by an atomic drop. Storm with a right hand. Storm climbs the top rope but Zelina trips her up.

Zelina throws Storm off the second rope. She hits Storm with the Code Red. Zelina goes for the cover and gets the pin.

Roman Reigns along with Paul Heyman and The Usos make their way down to the ring. Roman tells them to acknowledge him. He says his special council had one job to do and that was to make sure that his cousins The Usos were drafted to SmackDown. And that is what he did. He tells the fans to acknowledge Heyman. Roman tells Paul that he loves him and that his cousins love him too. He tells Heyman that he is part of their family, he is the wise man to the bloodline. And that’s what he wants him to do. He wants him to be wise. He tells Heyman to tell the truth.

The fans chant suplex city as Roman tells them that suplex city doesn’t exist, this is the island of relevancy. He tells Heyman to admit that he is responsible for Brock Lesnar’s free agency.

Heyman says he has been with his family for 40 years. Heyman tells Roman he chose him, rescued him, saved him to be his special council because he knew he was the wise man. Heyman says he has been accused of many things in his life and he has been guilty of many more but he has never been accused of being stupid and pulling the trigger now on the tribal chief would be stupid. Heyman says the whole thing would be for him to be with him until Crown Jewel and after that leak it all to Lesnar and pull the trigger. He says Lesnar is lying to him and he is telling him of his plan before it even happens. Heyman says Roman would not pick a stupid man to be his special council.

He tells Roman that Lesnar cannot stand that at Crown Jewel, the conqueror will be conquered. As he is talking, Roman asks for the microphone. He tells Heyman he doesn’t want him to tell him. He wants Heyman to look in the camera and tell Brock. Roman tells Heyman that he will protect him because he can.

Heyman looks at the camera. He tells Brock he outsmarted the wise man on this one. Frankenstein taught the doctor a lesson. He knows what will happen to him at Crown Jewel. They had this conversation years before. He told him that The Undertaker met his match years ago at WrestleMania and that match was Brock Lesnar. He says Brock Lesnar has met his match and that match is called Roman Reigns. He says Roman will walk into Crown Jewel into the tribal chief and he will fight him as a tribal beast. And he will learn one thing and that is the winner and still reigning, defending, undisputed WWE Universal champion is Roman Reigns. He says that is not a prediction, that is a spoiler. And he can believe that.

We cut backstage and Seth asks Adam Pearce and Sonya Deville if Edge will be there tonight. They tell him that Edge was going to be here tonight up until last week. Seth tells him that he will go to the ring tonight and if Edge doesn’t show up, that’s on them. He gives them a framed picture of Edge and Beth, telling them to return that to him. 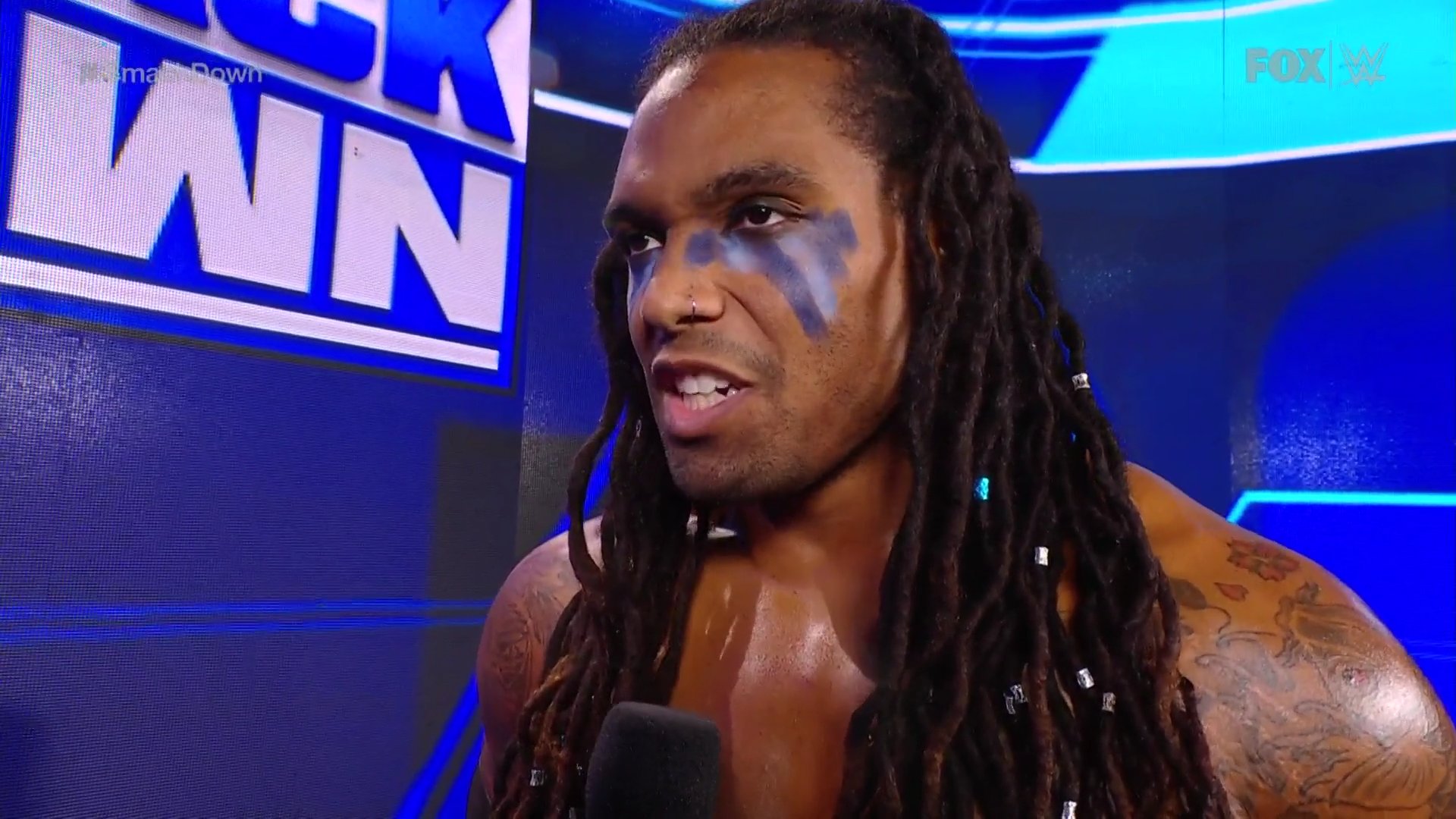 Kayla is backstage with Mace. She asks him how it will be to compete while not being in a tag team. He says no one matches his strength to dominate. He is not on SmackDown to compete, he is there to annihilate.

Both men are in the ring as Madcap Moss tells a lame joke. Both men laugh and out comes Kevin Owens. Madcap goes to the outside but Owens throws him into the barricade. Owens in the ring as he attacks Corbin. Madcap attacks Owens from behind. Madcap Moss hits him with a modified neckbreaker.

We cut backstage as Pearce and Sonya are talking. In comes Naomi who asks Sonya why she wasn’t selected for the Queen’s Crown tournament. Sonya says she is not worthy of being a queen or even on the SmackDown roster. Naomi asks Adam if she can get traded back to Raw. Sonya says Naomi has a match next week… against Sonya.

King of the Ring Tournament
Finn Balor vs. Cesaro

Cesaro with a crossface but Balor gets out of it. Cesaro goes for the swing but Balor reverses it into a pin but Cesaro kicks out. Cesaro runs towards Balor but Balor moves out of the way and Cesaro hits shoulder first into the ring post. Cesaro on the outside and Balor flies over the top rope onto Cesaro. he throws Cesaro back in the ring. He hits him with a drop kick. Balor climbs the top rope and he lands the Coup de Grace. He goes for the cover and gets the pin.

.@BeckyLynchWWE will battle @SashaBanksWWE next Friday on a SUPERSIZED #SmackDown on @FS1! pic.twitter.com/gy08DSOKvC

Becky Lynch is backstage with Adam Pearce and Sonya Deville. She says she has delivered at every request they have made. She asks how Bianca and Sasha earned their match. She says she gave the people the biggest match possible. Sonya says they all know how good she is but she has to prove it to the rest of the world. Becky signs the contract and walks out.

Out comes Seth Rollins to the ring. He says they have been waiting all day, he has been waiting for weeks. He asks Edge to come out and to answer his challenge. He tells Edge he can even name the stipulation. He says he ended Edge with one stomp. Rollins tells him if he won’t answer his challenge, he will take that as an answer being that he is not Edge light and that he is better than him.

Seth says he understands that the fans are disappointed. He is disappointed too. But this is not about him. He says Edge is not just disappointing him but all of his fans and his family. Seth says it is embarrassing but it is true, he cannot imagine what it’s like for his little girls to know that their dad is no longer an inspiration but a coward.

Edge grabs a microphone and says him and Seth in a Hell in a Cell.