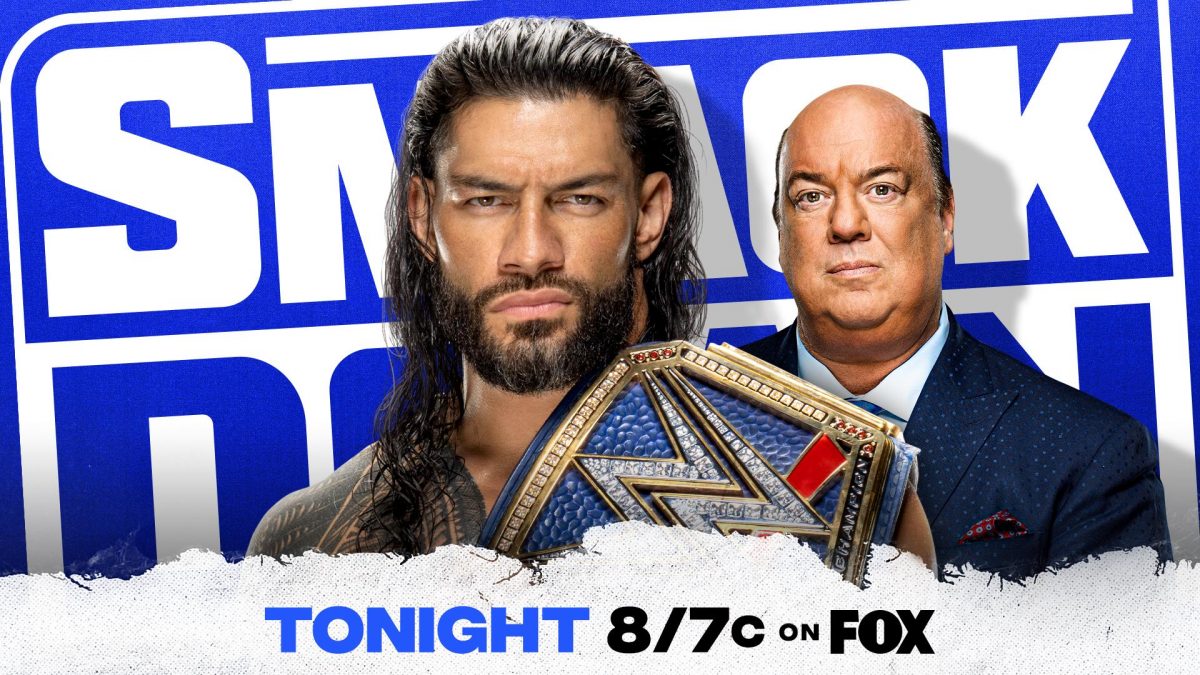 WWE SmackDown kicks off with Roman Reigns, The Usos and Paul Heyman walking down to the ring. Roman says last week, the tribal chief wasn’t at SmackDown because when you smash someone like Brock Lesnar, you have to celebrate. Reigns says he took a vacation and he heard every one complaining, where is the tribal chief but he is there now. He tells the fans to acknowledge him.

Roman says he had a great week, he was on a private island, he was running naked and his wife loved it. But not every one had a good week, it was a bad week for many because the tribal chief wasn’t there. He says Lesnar had a bad week because he got himself fined one million dollars and suspended. He says he is responsible for that, he made that happen. Roman asks Heyman what else happened last week.

Heyman stutters and Roman asks him what happened. Heyman says The Usos had a match against The New Day and the titles were not on the line because they would never have a title match on the island of relevancy without him. Roman asks who won and lost that match. Heyman tells him that the match was won by The New Day as the fans chant New Day rocks.

Roman tells the fans they like The New Day and he thinks they are great. But they’re not better than the Bloodline. Roman says he is having trouble understanding how his cousins, The Usos, the greatest tag team of this generation lost to The New Day. Roman asks them which one got pinned as both Usos point to each other.

Roman looks at Jimmy and says they lost because of him and for him to tell everyone how he is going to fix that problem. Jimmy says he got them, he said he is going to make them acknowledge who the tribal chief is, who the Universal champion is.

Woods says he if Jimmy is able to defeat him tonight, Woods will acknowledge him. But when he defeats James, he will be made to do what he is supposed to be doing which is bend the knee. Jimmy says no one is taking orders from them. Jey says they don’t bend the knee to anyone as Roman asks for a microphone. Roman says that the Bloodline accepts.

Sonya is backstage and says she doesn’t have a vendetta against Naomi. She asks when the last time was she this fire and passion inside of her and the answer is never. Sonya says Naomi is glowing with confidence because she lit a fire under her.

Back from commercial, Naomi with a sunset flip but Shayna kicks out. Shayna goes for the clutch but Naomi grabs the ropes as Shayna keeps the clutch on. Naomi rolls Shayna up and gets the pin.

Out comes Sonya as she says no one will leave the ring before she makes her remarks. Sonya says before the pin, Naomi grabbed the ropes and it should have been a rope break and the hod should have been released and the pin should not have counted. She says she knows that Naomi is upset but rules are rules and the match is restarted.

The bell rings and Shayna with the Kirifuda clutch as the referee calls for the bell.

Roman is backstage and he tells the Usos he took one week and SmackDown sucks. He says it’s almost as bad as Raw as The Usos laugh. Roman asks them if they think this is funny. Roman asks Jey what they don’t do as Jey tells him they don’t lose and they don’t lose because they’re the one’s.

A vignette airs for Xia Li hyping up that she’s coming soon to SmackDown.

Kayla is backstage and in comes Ridge Holland. He tells her he wants to meet his idol Sheamus because he is rough and when Sheamus defeat John Cena and won the Royal Rumble, they all celebrated back home. He learned things while watching Sheamus and that is awful news for the rest of SmackDown.

We see a clip of last Friday’s SmackDown where Shotzi attacked Sasha Banks after her match against Charlotte Flair.

Shotzi is backstage with Megan Morant. She says ever since she got to SmackDown, she lost her tag partner, the support of the WWE Universe and last week thanks to Sasha Banks, she lost the biggest match of her entire career. She says she is not going to smile and pretend that everything is going well. Sasha is her target and she is going to run her over. And she doesn’t need a tank to do it.

Garza and Mansoor are in the ring. Garza with a take down and an arm bar. Mansoor gets out of it and a drop kick takes Garza down. Garza with a spine buster. He gets Mansoor in the corner and Carrillo is tagged in. They double team Mansoor. Carrillo goes for the cover but Mansoor kicks out. Carrillo with a chop to the chest.

Carrillo stomping on Mansoor in the corner. A right hand by Carrillo as Garza is tagged in. They double team Mansoor. A drop kick by Garza as he goes for the cover but Mansoor kicks out. A half crab by Garza as Mansoor gets out of it and a DDT by Mansoor. Carrillo and Cesaro are tagged in. Cesaro with a clothesline.

Cesaro with an uppercut. He goes to the outside of the ring and hits Garza with an uppercut. Cesaro with a springboard corkscrew uppercut off the second rope. He grabs Carrillo but in comes Garza. Cesaro spins Garza around as Carrillo attacks Cesaro. He goes for the cover but Mansoor breaks it up. Carrillo knocks Mansoor down. Garza is tagged in and they double team Cesaro, hitting him with a dropkick as Carrillo had him in a hold. Carrillo goes for the cover and gets the win.

Aliyah is backstage with Jeff Hardy and in comes Kayla. Aliyah leaves as Jeff walks away and sees Sami talking to Aliyah as Sami tells her people go to him for advice. He tells her he has advice for her outfit and tells her to wear pants suit and he walks away. Aliyah asks Jeff if Sami is always like that and he tells her he is.

Drew McIntyre is in the ring. He says Drew is in the ring and that means it’s the SmackDown Warriors open challenge. Out comes Ricochet to the ring. He tells Drew that he has known him for a long time but Drew is playing with fire. He tells Drew if he keeps coming out every week and acting the way he is acting, one of these days, someone will walk out, get in the ring and he will smack him in the mouth. Ricochet slaps Drew.

King Xavier and Kofi are backstage and in comes Kayla. Woods says tonight’s match will be just and Jimmy probably has wobbly knees because they would hate to see him pull a muscle when he bends the knee. Kofi claps and says hail King Xavier.

Corbin welcomes every one to Happy Talk as he says they have a lot to be happy about. Madcap makes a lame joke about Shinsuke Nakamura and Ric Boogs. Corbin says there is no real competition for them on SmackDown as he introduces The Viking Raiders to the ring.

Madcap says they don’t look happy as Corbin insults them. They tell Madcap and Corbin that they are not there to be their guests or happy, they tell Corbin and Madcap that they make them miserable. They are there to raid Happy Talk because it’s corny and it sucks. Corbin says they are in a sour mood. Madcap makes a lame joke insulting them.

Back from commercial and the match is under way. Madcap and Ivar are in the ring. Ivar with an arm bar but Madcap with a right hand. A head lock by Madcap as Erik is tagged in and they double team Madcap. Erik goes for the cover but Corbin gets in the ring. Madcap with a spine buster. He throws Erik in the corner and Corbin is tagged in. A right hand by Corbin followed by a head lock.

Winners: By count out, The Viking Raiders

Hit Row are backstage and in comes Sami Zayn. He says as the locker room leader he has to tell them that their entrance a few weeks ago on SmackDown was a little flat. He says he only says this because they have the potential to be big stars. They ask him if he can show them how to make a proper entrance. Sami tells them he can do that and to follow him.

Out comes Sami Zayn dancing to the ring as he says that is how you make an entrance. Sami says the guys he is about to introduce have many qualities and more with the right leadership. He welcomes Hit Row. They cut a promo insulting Sami. He leaves as they start laughing.

The Usos are backstage as Roman and Heyman are sitting. They ask Roman if he’s going to the ring and Roman asks how many of their problems does he need to fix as they walk to the ring.

Back from commercial, Jimmy with a kick to the side of the head. He hits Woods with a knee to the face. He goes for the cover but Woods kicks out. Jimmy with a head lock but Woods gets out of it. Woods with a right hand knocks Jimmy down. Woods lifts Jimmy up and throws him onto the top rope. A knee to the face by Woods knocks Jimmy to the outside. Woods to the outside as he throws Jimmy back into the ring. Woods climbs the top rope, he hits Jimmy with a leg drop. He goes for the cover but Jimmy kicks out. Woods climbs the top rope as Jey distracts him.

All four men are in the ring as Woods tells Jimmy to bend the knee. In comes Roman Reigns from behind as he hits Woods with a Superman punch. They attack Kofi and stomp on him. Woods with right hands on Roman but The Usos hit him with a double super kick. Roman with a spear on Kofi. They kick the back of Kofi’s right knee. A half crab on Kofi and a splash onto Kofi’s right knee.