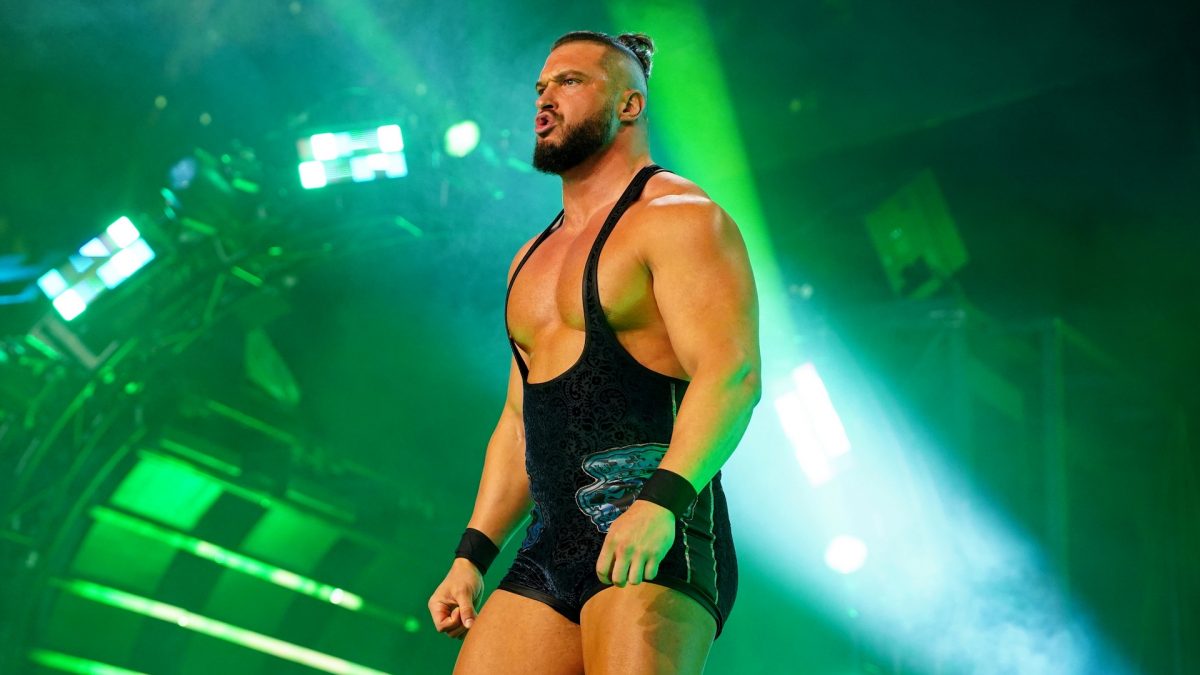 WWE reportedly is currently interested in potential signing Wardlow in the future, according to WrestleVotes.

It was reported that their sources stated that WWE officials recently became interested in the idea of potentially signing Wardlow once his current contract with AEW expires. It was also reported that several WWE officials “love his potential” as a big star for the company.

With his biggest match to date happening later tonight, I can confirm, without hesitation, that WWE will be extremely interested in luring Wardlow away from AEW when his contract is due. There are several people within World Wrestling Entertainment that LOVE his potential.

A recent episode of The Rich Eisen Show podcast had John Cena as the guest. One of the topics discussed included Cena’s thoughts on WWE’s waves of mass releases over the past two years.

“Well okay, there’s a lot to unpack there. I will say this: When I started in the WWE, the WWE had just absorbed WCW and ECW and the — and also had two developmental territories and the rosters were abundant is probably a good word so, when I started in the WWE, there were releases twice a year and it created stakes for developmental talent and it created stakes for talent to try to make a name for themselves because we just knew. We knew that on a calendar year, shortly after WrestleMania and either before or after the holidays, there would be cuts. There always were and that seemed to stop, man, right around when we really began to redefine ourselves with our new school — I’ll say the Ruthless Aggression-era style of characters; me, Brock [Lesnar], Randy [Orton], Dave [Bautista]. When those guys began to anchor in and develop the program going forward into the next decade and more and we started to expand our reach, we started having more programming, the talent rosters started to get big and then it became — I think a lot of it, WWE’s hiring strategy, I think a lot of it — and this is, once again, I’m not thinking for the WWE. This is just me posing a different perspective. I think a lot of it might have been a little slightly defensive hiring because there was and still is a giant boom right now in sports-entertainment. People are absorbing this content, they’re engaging. You know, people are making a name for themselves outside of the WWE. It’s no longer a one-stop shop so I think with this flux of passionate people who love sports-entertainment, people do get a name for themselves outside of WWE and if the WWE feels maybe that they can be a fit in that world, they’re gonna try to give that person a shot. They’re also really — they’re really bullish on continuing to hire new talent so the NXT Performance Center is I don’t wanna say overwhelmed, but they’re at max capacity so you have all of these performers and a lot of them aren’t getting a chance to perform and I think that’s the real frustrating thing, both to the WWE and from a stance of a performer and unfortunately, at the end of the day, it is a business and I remember when I started in the WWE, I wanna use the word ‘fortunate.’ I was fortunate enough to be at the show in Atlanta when Stone Cold Steve Austin was fired and that moment right there, it shot through me like a cannon because I got the impression that if they could fire Stone Cold Steve Austin, unless your name was Vince McMahon, everyone is replaceable and I think a lot of the frustration from the audience out there is they view sports-entertainment like I do.

I love watching matches, I love seeing potential in human beings. I love seeing potential in performers and I see potential in everybody, especially when people begin to define what they would call a gimmick or a personality. I love to be able to try to run with it in conversations to see how far we can take it. But there is only so many spots, there is only so much programming and I understand from the business standpoint, the amount of releases that have had to happen. If the company justifies that, ‘Hey, this is the move we’re making. We wanna carry less talent,’ it has very little to do with profit loss margin. If the company strategy is to run on a lean roster, it doesn’t matter, you run on a lean roster. If the company strategy is to run on a fat roster — I remember when we had stacks of performers and the stock price was at seven bucks. It’s just the directive that the company was given to run on a talent-heavy roster or a talent-lean roster and I know obviously this is a touchy subject and it’s gonna elicit perspective from everyone and everyone certainly is entitled to their perspective. I think the sad thing here is people who have this gift aren’t being allowed to use it and people are out of a job and that is the absolute saddest thing that people can no longer work at a company that they called home for a period of time. I feel for everybody who’s had to go in that direction but all of us, myself included, our journey will eventually have an end and when you’re in it, sometimes you don’t have that perspective but I personally, from my early days in the WWE, always had the perspective that it could be over tomorrow for any and all of us because if they can fire Steve Austin, there’s no way I’m even close to his ability and that means that they can fire me but that’s just the culture I was brought up in. I was brought up in biannual cuts and it happened all the time and I just didn’t think we went through — WWE went through such a long period of not releasing anybody and now, they’re kind of getting back into that rhythm again that it is a very abrupt shift to somebody who’s not familiar with that and I do — my heart goes out to everybody who has to get that sad news because it is — that’s a tough conversation to have.”

Sports Illustrated held a recent interview with Big E. One of the topics discussed included Big E’s thoughts on his feelings over how his WWE Championship run ended.

“I wanted it to be a five-course meal, and it was more of an appetizer,” he said. “I’m overly critical of my work to begin with, so I wouldn’t say I was happy with it. My hope was to knock it out of the park, and I fell a bit short. So it’s motivating to start that climb back.”

Big E also stated that he was never told what was the original finish for his WWE Championship match at WWE’s Day 1 event earlier this month.

“I never heard a finish [for the four-way]. When it became a four-way, especially one so loaded, anything was a possibility. But I hadn’t heard anything about a finish.”