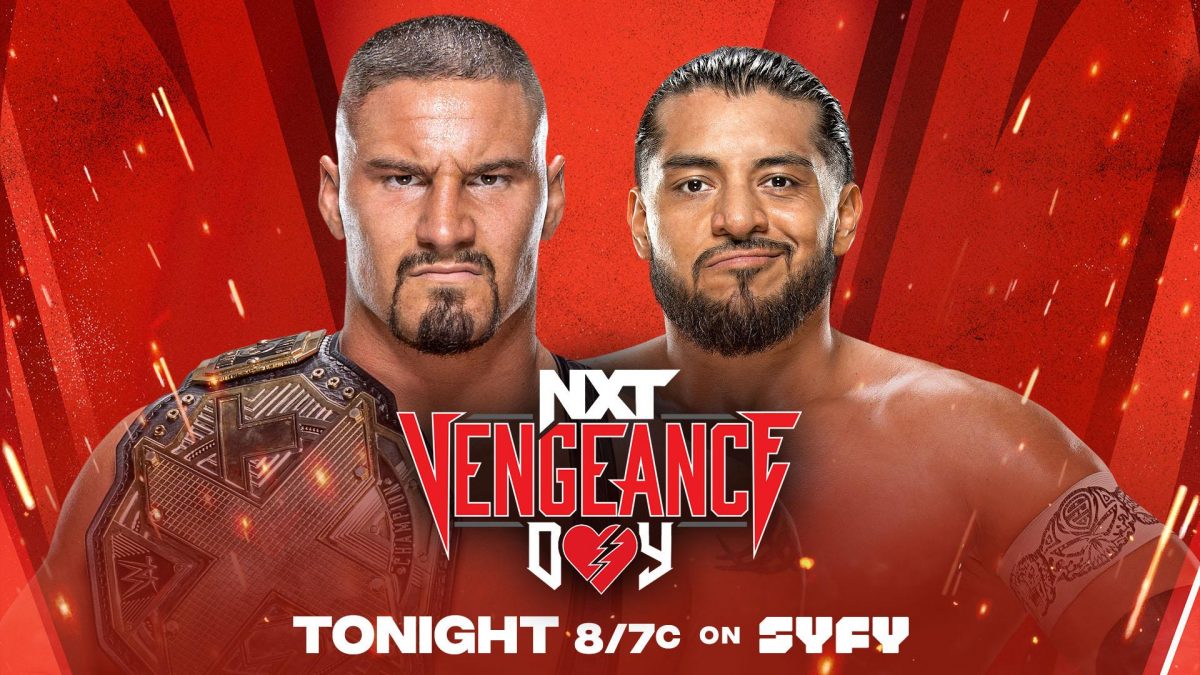 We see Mandy Rose at the pool and she is sending messages to Jacy Jayne and Gigi Dolin about their match against Indi Hartwell and Persia Pirotta. We see Tony D’Angelo sending text messages to Toxic Attraction. They are also texting with some other people on Vengeance Day.

Dunne with an enzuigiri and he sends Tony into the cage a few times. Pete grabs a chair and hits Tony in the back with it. Dunne with another chair to the back. Dunne grabs a trash can and Tony with a double leg take down to stop Dunne. Tony with a Falcon Arrow onto the trash can. Tony grabs a chair, chain, and kendo stick. Tony hits Pete with the kendo stick. Tony goes for the tool box and Dunne closes it on Tony’s hand and then jumps onto the tool box. Dunne grabs a wrench and turns the finger and then stomps on the elbow on the mat. Dunne grabs the cricket bat but Tony sprays Pete with the fire extinguisher. Tony with punches and he tries to send Pete over the top of the cage. Tony with a superplex for a near fall.

Tony goes back to the tool box and he gets some zip ties and ties Dunne’s hands behind Pete’s back. Tony with punches to Dunne and then Tony tries to do some dentistry with a hammer. Dunne with a head butt and he kicks Tony when Tony charges at him. Dunne with a triangle on Tony but he is unable to use his hands. Tony with a one arm power bomb to escape followed by a DDT for a near fall. Tony sets for a power bomb through the table but Dunne counters into a guillotine. Dunne is able to cut the zip ties. Dunne grabs the fingers but Tony sends Pete into a trash can lid against the cage. Tony goes for the crowbar but Dunne stops Tony and hits a running power bomb through the table. Dunne gets a near fall.

We go to Cora Jade who is awakened by a call from Raquel Gonzalez. Raquel says that if she wants to win the Dusty Cup, you get up. Raquel is outside Cora’s apartment. Raquel mentions it will take three wins to win the Dusty Cup while Cora cannot believe it is open this early. We see them training. Raquel yells at Cora for snacking. The sun has come out and it is time to test their stamina. Raquel tells her they need to do the same thing tomorrow and she was impressed with Cora’s performance.

Vic mentions that the Women’s Dusty Cup starts next week.

We go to the Creed Brothers and Malcolm Bivens. Bivens says these teams cannot be any different. Brutus says they are the ones who hit the bags. Malcolm says what MSK hits is illegal in 13 states. Julius says MSK won last year because The Creeds were not in the tournament.

Wes Lee and Nash Carter talk about being the new guys last year and they won the Dusty Rhodes Tag Team Classic. Wes mentions how Nash was crying after they won last year. Wes says they are the veterans tonight. Nash says they will use Riddle’s advice to win tonight.

Jacy and Gigi attack the challengers before the bell and connect with super kicks that send Indi and Persia to the floor. Gigi and Jacy with cannonballs off the apron. Persia is sent into the ring and the referee starts the match. Jacy with a forearm and Persia catches Jacy on a cross body and hits a fallaway slam. Indi tags in and Persia with a tilt-a-whirl back breaker followed by a clothesline from Indi for a near fall. Indi sends Jacy to the apron and connects with an uppercut and boot to the head. Indi gets a near fall. Jacy backs Indi into the corner and Gigi tags in. Mandy distracts the referee and Jacy and Gigi kick Indi off the turnbuckles. The referee sends Persia back into her corner and Mandy sends Indi back intot he ring.

The referee sends Mandy to the back and she argues the decision.

Persia is sent into the ring steps when Jacy moves out of the way. Indi is on the apron and Jacy pushes Indi over the top rope on a springboard move. Gigi with a kick and a near fall. Jacy tags in and they hit a high low combination for the three count.

Wendy Choo and Amari Miller are in the back and Wendy asks Amari how her Valentine’s Day was. Wendy asks about the Dusty Cup and Amari says that she already has a partner. Wendy says that is okay and Amari walks away. Wendy gives her a thumbs down.

Wendy sees Dakota Kai and she slides over to Dakota to ask her if she wants to be partners for the Dusty Cup.

Dakota talks to her invisible friend and Wendy says it will be fun. Wendy tells them to get back to her.

We are at a bar with Josh Briggs and Brooks Jensen. Josh asks Brooks about the date and Josh says that Brooks owes him $50. Brooks says he picked up Kayden and went to dinner and talked about the Dusty Classic. Kayden paid for her own dinner and he took her home. Brooks says he hugged her and Kayden told him that he is like a little brother. Josh explains the friend zone to Brooks. Fallon Henley is the bartender because they are at her family’s bar. Josh explains to Fallon what happened on Brooks’ date. She explains that Brooks has a friend for life and Brooks is not happy.

LA Knight comes to the ring and before he can speak, Grayson Waller, Orlando’s finest, and NXT’s finest make their way to the ring.

Grayson says that LA has been attacking him and has been obsessed with him for months. Waller says he has no other choice. Waller shows the officers what happened. Waller wants Knight arrested but Knight takes the papers.

Knight says he wants to explain himself. He says he read the whole document and Knight has his own video tape evidence. Knight says Waller and everyone else knows that Knight cannot touch Waller but Waller cannot touch LA Knight. Knight says that the order isn’t worth the paper is it written on.

Waller says that Knight can’t touch him but he can because that is the way it is in Australia.

The police officers leave and Waller is not in a good mood.

Knight with a clothesline and punches to Waller. Knight with kicks in the corner.

Sanga comes to the ring and Knight knocks him off the apron. Sanga catches Waller when Knight sends Waller over the top rope.

Knight says he is going to face Waller next week.

Persia tells Indi they were so close. Indi says it is her fault. Persia says they can do it in the Dusty Classic.

Dexter shows up and Indi leaves with him.

Duke Hudson shows up and he leaves the locker room with Persia.

Tommaso Ciampa says he has been building his brand and home for six years. Still there are people who act like it does not matter. Some think it is a farm system. He hears it in their tone and with their body language. Dolph Ziggler thinks he is better than Tommaso Ciampa. Ziggler thinks it is about fear. Tonight is about Bron Breakker and Santos Escobar. Dolph will be watching and I will be watching because this is his home.

Carmelo Hayes says he is NXT’s breakout superstar. When he shoots, he does not miss. Trick says that is why he is the North American Champion.

We are back with a look at Kay Lee Ray and Io Shirai as Kay Lee breaks stuff with her bat. She asks Io if she wants a shot. Kay Lee says Io doesn’t have a title and Toxic Attraction is causing trouble. Io decides to break stuff and she is having fun.

Zoey Stark shows up and says that this is a mess so Io throws Zoey’s coffee mug. Io says that she likes Io.

We go to a video of Dusty Rhodes talking about tag team wrestling in NXT.

Lee kicks Brutus but Brutus kicks Lee into the turnbuckles. Carter kicks Brutus to the floor. Carter with a suicide dive but Julius catches him and spikes him to the floor. The straps come down and Julius with a clothesline for the three count.

After the match, The Creeds hold the trophy and celebrate with Malcolm.

We take a look at Nikkita Lyons. She mentions that her dad told her before one of his gigs to stop beating people up. She says the rest is history. That feeling of crushing a routine is like hitting a knockout blow on her opponent. She will be in action next week.

Imperium is in the ring. Gunther tells Alicia how to pronounce his name. Aichner congratulates the Creed Brothers for winning the Dusty Classic. After a grueling tournament you have earned an opportunity for their titles, but it is only an opportunity. Barthel says you must persevere through suffering, anguish, and the misery that you are not prepared to endure yet. Gunther says Marcel and Fabian have brough great honor to the sport. He says it is time to set eyes on championship gold. He will be watching Bron Breakker and Santos Escobar with the greatest of interest.

Solo Sikoa makes his way out and he says we get it. The mat is sacred. He says he doesn’t give a damn about that mat. On the island, you have to climb the ladder and face the biggest and baddest dude and slap the taste out of his mouth. Solo says that is what he is going to do. He does not care how Gunther says his name, he will wipe the mat with the Ring General and make him his bitch.

McKenzie Mitchell is with Dolph Ziggler and she asks him about what happened on Raw.

Dolph says it must be nice to stay in your lane and soak up the Florida sun. Ciampa flew himself in, probably on his own dime. Dolph says he hopes Ciampa got a good look. Ciampa is the pulse of NXT and next week, he stops that pulse and any chance of winning the title. He will break down the door. Dolph says he will be watching the NXT Championship Match closely.

We are back and Carmelo Hayes says that Grimes was good but he is great.

Pete Dunne stands by and congratulates Hayes on his victory and points out that he is still champion for now.

Next week on #WWENXT

Escobar gets a near fall. Ziggler freaks out about not being able to finish off Breakker and then Ciampa grabs Ziggler and they fight to the back. Escobar goes for a tornado DDT and hits it. Escobar goes to the turnbuckles and points to the sky and misses a frog splash and rolls through. Braekker escapes a fireman’s carry and hits a spear. Breakker with a military press into a power slam for the three count.