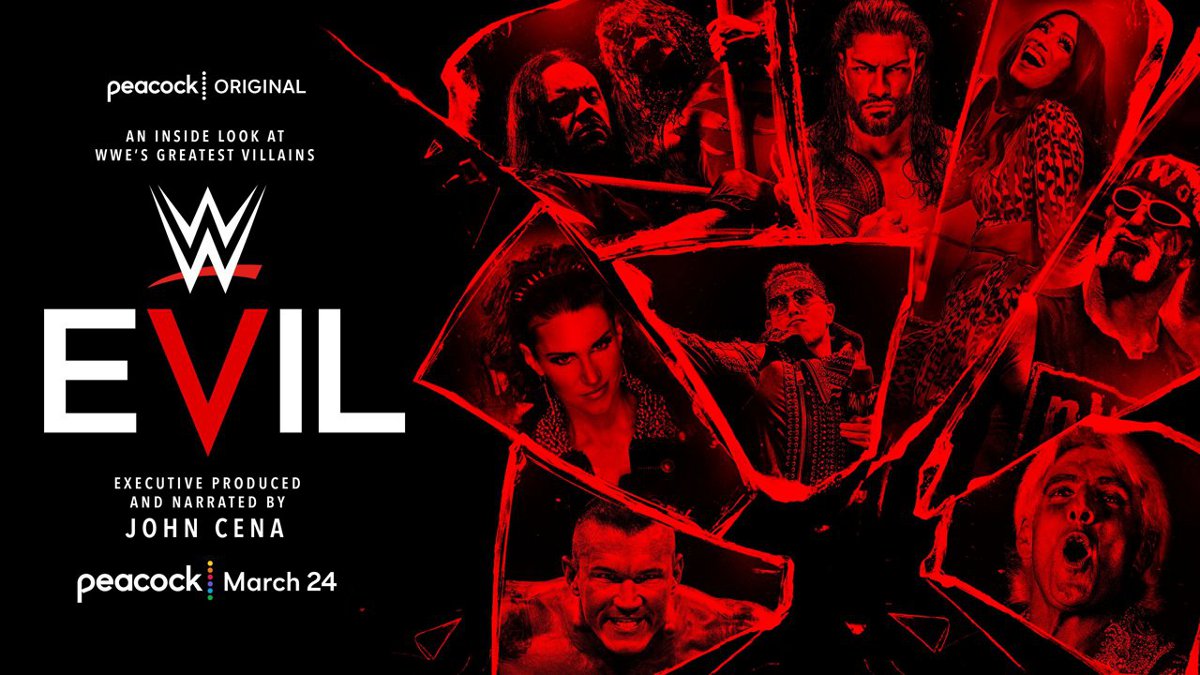 NBC’s Peacock recently announced that they will be debuting a new WWE themed documentary series called WWE Evil later this month on their service.

This upcoming new series was announced to be premiering on March 24th and features John Cena as the host. It was also announced that this upcoming series will be eight episodes in total and focuses on several memorable villains in WWE history.

Created and hosted by John Cena, the 8-part docu-series is the latest expansion of WWE programming on Peacock, and the first-ever original from WWE Studios. Taking an unprecedented look inside the psyche of the most diabolical antagonists in WWE, the series unveils the Superstars’ impact on mainstream culture.

“As Peacock continues to expand its WWE programming, we are thrilled to bring the new original series ‘WWE Evil’ to platform, working with the one and only John Cena,” said Benny Reuven, Vice President of Entertainment Unscripted Content at NBCUniversal Television and Streaming. “There is no one better to take viewers into the minds of WWE’s fiercest villains than Cena himself. We can’t wait for WWE fans to devour this series.”

Each one-hour episode of this psychological exposé dives deep into a single infamous heel, unveiling rare behind-the-scenes details from some of the biggest names in the industry. These “evildoers” undeniably shaped pop culture through the decades, making a tremendous nostalgic impact that bled into mainstream culture today.

WWE EVIL exposes new details from the characters who defined a generation of WWE including each villain’s history, their key rivalries and career defining moments.

WWE EVIL Superstars featured include:
EPISODE 1 – “Hollywood” Hulk Hogan: Hulk Hogan goes “Hollywood,” betraying his fans and beliefs to become the personification of evil.
EPISODE 2 – The Miz: From reality star to Superstar; Mike Mizanin took fame to new heights with his villainous alter-ego, The Miz.
EPISODE 3 – Sasha Banks: There’s a villain inside all of us. Sasha Banks unleashes hers to become “The Boss”.
EPISODE 4 – Brothers of Destruction: Brothers and sworn enemies The Undertaker and Kane align to become the ultimate evil duo in WWE.
EPISODE 5 – Randy Orton: Randy Orton’s “evil” evolution into the “Legend Killer” unleashes the true demons lurking within.
EPISODE 6 – Stephanie McMahon: Stephanie McMahon steps out of her father’s shadow to forge a legacy of power and corruption in WWE.
EPISODE 7 – Ric Flair: Witness how the “Dirtiest Player in the Game” Ric Flair became one of WWE’s greatest villains.
EPISODE 8 – Roman Reigns: From hated good guy to beloved bad guy; Roman Reigns finds new life by embracing his dark side.

WWE EVIL was created by executive producer John Cena. As the narrator of the series, Cena gets to re-engage his bad side, as well as celebrate other Superstars who became pop culture icons like himself.

As the exclusive streaming home in the U.S. for WWE, Peacock offers fans a catalog of compelling content in addition to premium live events. Featuring a massive content vault of iconic WWE historical moments and events, WWE on Peacock just got bigger with the addition of the very first original series co-produced by WWE Studios and Bunim Murray Productions. For more information about WWE on Peacock visit: PeacockTV.com/sports/WWE

The battle between good and evil is as old as time itself. But the line between the two is often blurred…and sometimes, what side you stand for is simply a matter of perspective. This fascinating subject matter is the focus of WWE EVIL, an entertaining psychological exposé into the minds of the most diabolical villains in WWE history. Journey into the deepest and darkest recesses of these WWE Superstars’ psyches, uncovering dastardly secrets and exploring the real-life motivations for their turn to the dark side. Examine the ultimate rogues in WWE; from the “Nature Boy” Ric Flair, The Miz, and “Legit Boss” Sasha Banks, to the “Billionaire Princess” Stephanie McMahon, “The Viper” Randy Orton and “Hollywood” Hulk Hogan, to the “Brothers of Destruction” and the “Head of the Table” himself, Roman Reigns! Discover why there is no light without darkness, and why there can be no hero…without a true villain.

An official debut trailer for the series was also recently released by Peacock:

WWE Announces Next European Tour for This April & May

WWE recently announced that they will be holding a new European tour this April and May.

It was announced that this upcoming four-city tour will be taking place from April 28th to May 1st and includes events in England, France, and Germany.

It was also announced that Ronda Rousey will be among the talent appearing at this upcoming tour.

Tickets for WWE Live are available at the following links:

General on-sale available this Monday at 10 AM GMT

General on-sale available this Monday at 10 AM GMT

The Baddest Woman on the Planet, “Rowdy” Ronda Rousey, will also make her long-awaited return to The O2 in London on Friday, April 29, and the Accor Arena in Paris on Saturday, April 30. This will be the first time Rousey has performed live in London and Paris since 2018.

All tickets for previously scheduled WWE Live events in Paris and Leipzig remain valid. Ticketholders who cannot attend the new dates should contact their point of purchase.

As noted before, former XFL Commissioner Oliver Luck is currently suing Vince McMahon over claims of wrongful termination. McMahon filed a countersuit alleging that Luck defied his orders on league personnel decisions and was derelict with his duties on the job.

PWInsider’s Mike Johnson reported that a settlement conference has been scheduled to take place on March 15th in Bridgeport, Connecticut involving the representatives for Luck and McMahon, based on recent court documents filed.

Dave Meltzer reported in this week’s Wrestling Observer Newsletter that those close to the situation stated that they currently believe a settlement will be unlikely. Those same sources stated that the main reason is due both sides feel that this is an “all or nothing” type case with Luck believing that he is owed all of the entire $23.8 million left on his contract and McMahon believing that he legally fired Luck and is not entitled to anything.