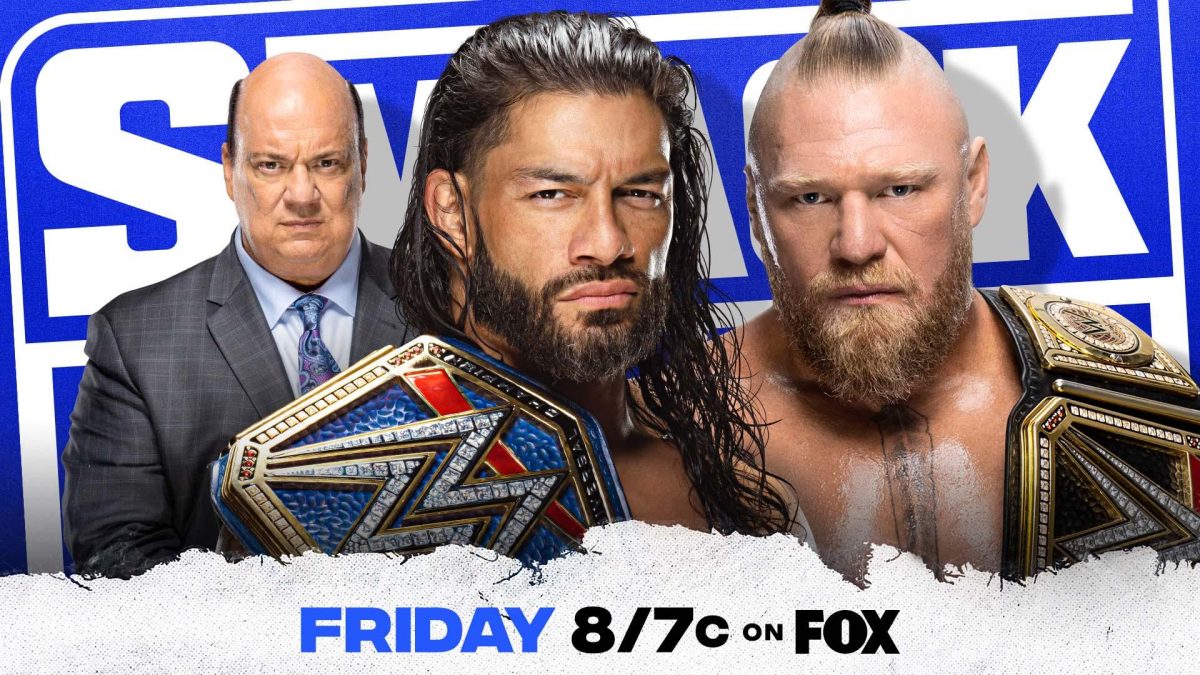 WWE SmackDown kicks off with Roman Reigns, Paul Heyman and the Usos walking down to the ring. Roman tells Charlotte, North Carolina to acknowledge him. He says it’s a special night. They are on the road to WrestleMania, tonight is the first night he gets to see Brock Lesnar face to face since Madison Square Garden. He says once Lesnar shows his face, he will make him bleed all over Charlotte, North Carolina.

Heyman takes out his cellular phone and reads a message saying that Lesnar experienced weather problems in Saskatchewan and Lesnar will not be there tonight. The fans chant that they want Lesnar. Roman says he understands, he fulfilled his obligation, he wants Brock to be there too. Roman says Lesnar is scared of him and he should be. Roman says he is in God mode. Greatness on a different level. Heyman tries to speak again but Roman tells him people want to hear what he has to say. Heyman reads another message saying that Lesnar has landed and he is on his way.

Roman asks on his way where and Heyman tells him Lesnar is on his way to the arena. Roman gives Heyman the microphone and he tells him he will bring this home as they all leave the ring.

They cut backstage as all four men get in an SUV. Lesnar is shown honking a horn and driving a forklift. He crashes the forklift into the SUV.

Back from commercial, we see Brock tilting the car on its side during the commercial. Roman and The Usos made it out and into a truck with Lesnar ripping a door off the truck as they drove off.

Angel with kicks and a splash in the corner. Humberto is tagged in. They knock Boogs off the ring apron and double team Nakamura. He goes for the cover but Nakamura kicks out. A modified head lock by Humberto but Nakamura with a hip toss. Boogs is tagged in. Right hands and axe handles onto Angel. A gorilla press slam on Humberto as he throws him onto Angel. Boogs with the Boogs Cruise. He goes for the cover and gets the pin.

Before the match, Megan Morant is with Corbin, Mahal, Shanky and Madcap Moss. Corbin says at WrestleMania he will get the win against Drew McIntyre. Madcap says a bad joke which doesn’t make Corbin happy as they walk out to the ring.

Back from commercial, Mahal with a kick to the face on Ivar. He goes for the cover but Ivar kicks out. A head lock by Mahal but Ivar gets out of it and right hands onto Mahal. Corbin is tagged in. Corbin gets in the ring and a splash on Ivar. Mahal on the outside of the ring but Drew with a Glasgow Kiss. Drew is tagged in as Corbin tags Shanky. Mahal gets in the ring but Drew clotheslines him to the outside. A Michinoku driver by Drew onto Shanky. Drew with the Claymore. He goes for the cover and gets the pin.

We cut backstage and Sami Zayn says he is not Intercontinental champion because of Johnny Knoxville. He says Knoxville is intent on bringing his world to Zayn. But Zayn challenges Knoxville to an anything goes match for WrestleMania.

Carmella and Queen Zelina are at ringside. The bell rings and we are under way. Naomi with an arm bar on Liv as Sasha is tagged in. Sasha with a waist lock but Liv drops Sasha onto the mat. Sasha back up and a right hand onto Liv. She runs towards Liv but Liv rolls her up but Sasha kicks out. Sasha with a head lock as Naomi is tagged in. They double team Liv. Naomi with a split leg drop. She goes for the cover but Liv kicks out. Rhea is tagged in and she hits Naomi with a drop kick. She goes for the cover but Naomi kicks out. Rhea goes for a body slam but Naomi lands on her feet.

Out come Shayna Baszler and Natalya to the ring. They attack all four women as the referee calls for the bell.

A video of Johnny Knoxville airs. He says he has been in the ring with an angry bull many times. He says Zayn is a great competitor and at WrestleMania Sunday, he can take anything Zayn throws at him. And he accepts the anything goes match for WrestleMania.

Natalya and Shayna are backstage. Sonya tells them she loved what they did in the ring and they have been added to the women’s tag team championship match at WrestleMania.

Michael Cole tells Pat McAfee that he is being summoned to Mr. McMahon’s office. Pat gets up and leaves.

After commercials, McAfee is seen walking out of Vince’s office. He walks down to the ring. He grabs a microphone and said on some random Monday, when he was 11 years old, he put on the USA Network and he saw something that changed his life. When he saw professional wrestling for the first time, his life changed immediately. He saw something that inspired hi, that was magical, that would shape him forever.

Pat says on that Monday night, when all hell was breaking loose, he found the thing that he thought he was put on this earth to do. Other professions got in the way and finally, after retiring, he got a call from the greatest of all time, Michael Cole and he asked him if he wanted to work on SmackDown. Pat says to give him a hell yeah.

He told Michael Cole that he was reaming of being in the WWE, of traveling to cities like Charlotte, North Carolina. Out comes Austin Theory to the ring. Pat says he was just suggested that he should apologies to him or lose his dream and lose his WrestleMania match. Pat starts to tell Austin Theory that he is sorr– but doesn’t say it. He says he apol–, but he can’t say it. Pat tells him that he is sorry for beating his ass last week. That he is sorry that his parents raised a douche bag. He is sorry that he made his filter face relevant. That he apologizes that he is a punk bitch. Austin takes out his phone and takes a selfie. He pushes Pat and leaves the ring.

They air the video messages that Big E posted on his social media over the past week following his broken neck that he suffered last week.

The bell rings and we are under way. Kofi with right hands but Ridge with a head lock take down. Ridge to the ropes and a spinning elbow by Kofi. He runs towards Holland but Holland throws him away. Kofi onto the ring apron. Right hands by Kofi and Holland to the outside. Kofi with a kick to the face. Kofi jumps off the second rope onto Holland on the outside.

Butch runs to the ring as Sheamus grabs him. That distracts Kofi as Holland hits him with the Northern Grit. He goes for the cover and gets the pin.

Butch runs to the ring but he is stopped by Sheamus.

Charlotte Flair makes her way down to the ring. She says when you are Charlotte Flair, you always have a plan. Last week, she showed Ronda Rousey why she is the most decorated woman in WWE history. No one has caused Ronda more pain than her. She says she keeps playing last week over in her head, Ronda was seconds away from tapping. But WWE officials pulled them away. That was just a taste of things to come at WrestleMania. The fans chant that she tapped out. They show Ronda watching backstage.

Flair says she is the mountain that Ronda has to climb to make a legacy. She kicks Ronda all the way down to the bottom. She is Charlotte Flair and her legacy is bigger than Ronda’s. And when Ronda loses at WrestleMania, she will run and have another child. She says Ronda doesn’t have the spine, love, passion or grace to become the 13 time women’s champion. Flair says she does not want to wait until WrestleMania as she calls out Ronda.