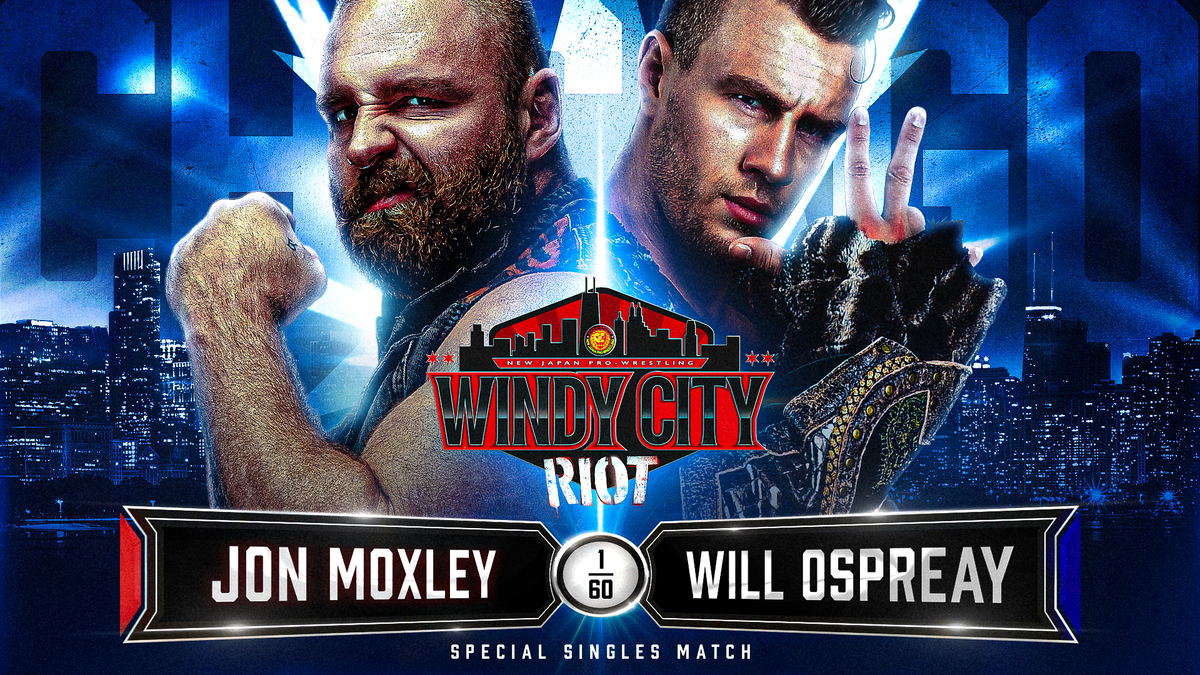 Most of this match was lost to technical issues, but what little made the broadcast was bad.

Before the match, QT cut a promo. He said this match was to determine the world’s top training system, either New Japan’s LA Dojo or The Factory.

Comoroto and Uemura opened the match with a short back and forth. Fredericks tagged in and immediately challenged QT. QT teased the interaction but tagged out to Comoroto. After Comoroto established control, QT actually tagged in.

Fredericks got the upper hand against QT right as the Fite lost the signal from the venue. From the opening moments, it was clear this show had production issues. The video quality was poor, and the audio sounded like Fite lifted it from a bootleg ECW VHS. Then the feed cut out altogether. This show was off to a great start.

Once the feed was back, Connors was in control of the match, and there was a commentary team. The LA Dojo team tried to maintain their lead, but Comoroto caught all three of his opponents in an awkward Samoan drop; this was enough for The Factory to recapture momentum.

Uemura led a very awkward exchange before a dive to Comoroto and Solow left QT and Uemura alone in the ring. Uemura looked to close, but a low blow to Uemura opened him up for a cutter. After landing his finish, QT pinned Uemura to bring this opening match to an end.

Winner: The Factory via Pinfall.

This match was what you would expect from a 10-man tag. It was incredibly busy with a handful of fun spots.

This match opened with a massive brawl. As things calmed down, both teams traded tags and short singles exchanges. Eventually, Team Filthy singled out Dickinson and cemented a strong lead.

After a long struggle, Dickinson dropped Limelight and hot-tagged to Rosser. Rosser took control for his team, and Alexander worked to maintain it. The match broke down for a while, leaving Coughlin and Kratos alone in the ring. Coughlin dropped Kratos with a German to bring back some order; this lasted for about 90 seconds.

Another brawl broke out, and this time it ended with a fantastic dive to the outside to take out everyone in the match. Back in the ring, Rosser secured a choke and forced Tiger to submit.

This was a delightful match.

After Nagata saved Rosser from the match prior, he grabbed a microphone and challenged Lawlor to put his title on the line. Lawler accepted, making this a Strong Openweight Championship match.

This match opened with a fun striking sequence that eventually spilled to the floor. Lawlor maintained control on the floor before leading the developing brawl back inside the ropes. Lawlor then began working Nagata on the mat.

Nagata continually avoided near submission defeat. Eventually, Nagata escaped back to the outside, where he landed a massive exploder suplex to gain his first lead. Inside the ropes, Nagata landed a butterfly suplex and secured the Nagata lock. From the Nagata lock, Lawlor transitioned into a leg lock. After escaping the leg lock, Nagata returned to the Nagata lock. A Justice Knee and exploder suplex from the top rope secured a Nagata near fall.

Lawlor secured a choke that Nagata reversed into a back suplex for a match reset. Lawlor secured another choke, leading to a penalty kick. After Nagata kicked out of the pin that followed, Lawlor dropped Nagata with a knee to the back of the head; this time, Nagata didn’t kick out.

Both teams traded tags and short singles interactions as the match began. Norton tagged into the match and challenged Cobb, leading to an exchange of suplexes. Norton dropped TJP and Cobb with a pair of sluggish clotheslines and tagged out.

Bullet Club worked to isolate TJP, primarily by raking his back. Davis eventually received the hot tag, leading to a UE takeover. The match broke down into a couple of brawls, finally leaving O-Khan, Cobb, and the Good Brothers alone in the ring. The Good Brothers set Cobb up in a magic killer, but O-Khan made the save (with about 30 Mongolian chops).

To bring the chaos to an end, Aussie Open cleared the ring and dropped Bey with Corealis.

After the match, O-Khan cut a promo and stood tall with the rest of UE, gold in hand. This crowd loved O-Khan.

This was an insane hardcore match, complete with tons of meandering and contrived weapon spots for the sake of weapon spots.

The match started with both teams swinging chairs at each other, leading to a brawl on the floor. What followed was a fight deep in the crowd, complete with barricade slams, drops to the floor, a fire extinguisher spot, and some trash can offense.

Back in the ring, team FinJuice singled out JONAH. JONAH was saved by his team before Juice could put him through some chair contraption. Juice continued to advance, however, by blocking a corner splash with a ladder.

Tito laid Juice out with an exploder into a ladder. King answered Tito with a nasty fireman’s carry drop into the chair contraption from earlier. This opened the door for JONAH, who cleared the ring with help from a trashcan.

JONAH and company isolated Finlay before his team eventually made the save. Team FinJuice then cleared the ring and started filling it with chairs. After throwing thirty or so chairs in the ring, team FinJuice threw all their opponents onto the pile.

Juice took out Tito with a spear through a table just as Jonah lept through a ladder, crushing a patiently waiting King. Finlay dropped Haste onto a chair, but Jonah answered with a sledgehammer shot. Juice was in tow, hitting Pulp Friction and setting Finlay up for a hammer shot of his own. With JONAH dropped, Finlay was able to secure the pinfall win.

Umino really connected with the crowd, and White is the industry standard for great wrestlers. Is it any surprise this was an incredible match?

Before the match, Jon Moxley appeared on the screen from an undisclosed location. After a “Let’s go shooter”, it was clear Shota Umino was Jay White’s opponent.

Umino started the match by rushing the ring and gaining a massive lead early. Regardless of his fast start, Umino’s lead was short-lived. White eventually slipped into control and began picking apart Umino. White took the action to the outside, slamming Umino into the barricades before a big lariat left Umino with a near fall.

White toyed with Umino, eventually launching Umino’s rally. Umino scored a near fall after a reverse DDT but failed to follow up. White turned things back around with a quick DDT of his own before insulting Umino in the corner. White continued to mock Umino with standing chops, but Umino answered with another rally.

Umino landed a ton of offense and looked to have victory in his sights. After a couple of convincing near falls from Umino, White caught Umino in the blade runner, bringing this match to an end.

This is the only match you could imagine from this pair. It was a war of stiff striking and exciting sequences; good stuff.

This match opened with a quick strike exchange that left both men on equal footing. Suzuki then began to focus Ishii’s right arm following an opening from an Ishii single-arm choke attempt. Suzuki brought the match to the floor, slamming Ishii into the barricade.

Ishii grabbed a chair to slow Suzuki’s advance, but Suzuki answered with a chair of his own. Then, after a quick chair duel, both men returned to the ring. A swift suplex from Ishii bought him a moment of reprieve, but Suzuki’s arm work let him slip back into control.

Ishii initiated a forearm battle that turned into an extended striking sequence. This went on for quite some time, with a wide array of striking and many momentum shifts.

After a brutal headbutt/sliding kick combination, Suzuki tried to close with the Gotch. Ishii reversed, delivering a headbutt of his own that left Suzuki slumped. Ishii landed a pair of enormous lariats; Suzuki kicked out at one. A sliding lariat left Ishii with a two-count.

After the match, Eddie Kingston walked to the ring and challenged Ishii to a match come May 14th in Washington DC. Kingston made a point of their differing styles, Ishii being strong style trough and trough, while Kingston is a student of the King’s Road.

Jon Moxley vs. Will Ospreay

This was something else. These men put it all on the line and pulled off an exhilarating to close the show.

This match opened with a brawl on the outside. Moxley had a slight lead once things found their way to the ring, but Ospreay took control by directing the action back to the floor.

After busting open Moxley, Ospreay brought the fight back between the ropes. Ospreay began to take his time exploiting his newfound control, leaving Moxely open to counter the handspring cutter with a German suplex and dropkick to the floor. At this point, Ospreay was also bleeding.

Moxley led a short sequence before Ospreay retook control with a top rope forearm. Moxley answered with a pair of suplexes and a forearm strike to counter a springboard attempt. Ospreay blocked Moxley’s attempt for an apron driver, delivering a cutter to the floor instead.

Ospreay set Moxley up on an announce table and delivered an insane elbow drop from the top rope. Back in the ring, Ospreay hit a springboard dropkick and shooting star press for a near fall. Moxley blocked the OsCutter and reversed into a Paradigm Shift DDT; Ospreay answered with a lightning-quick hidden blade.

After a high-impact sequence of moves, Moxley ducked the second attempt at hidden blade. Moxley connected with a barrage of elbows and tried for a choke, but Ospreay slipped free. Ospreay hit the OsCutter; Moxley kicked out. Ospreay tried to close again but was quick to respond with a lariat. Moxley dropped Ospreay with an awesome curb stomp, resulting in another convincing near fall. Moxley tried for another lariat, but Ospreay reversed into a Spanish fly and hidden blade. Moxley fought back, hitting, not one, but two more Paradigm Shifts; Ospreay kicked out again. Moxley locked in a rear-naked choke as the bell sounded pre-maturely. Regardless, this was the end of the match.

After the botched finish, Moxley dropped the referee with a Paradigm Shift.

Moxley cut a promo to close the show praising Ospreay and offering a rematch. The promo took a turn as Moxley called out Hiroshi Tanahashi, claiming his patience has run out. Moxley said he would fight Tanahashi on May 14th in Washington DC, even if he had to drag him there by his ponytail. Moxley ended the promo by saying he is the new ace of New Japan.