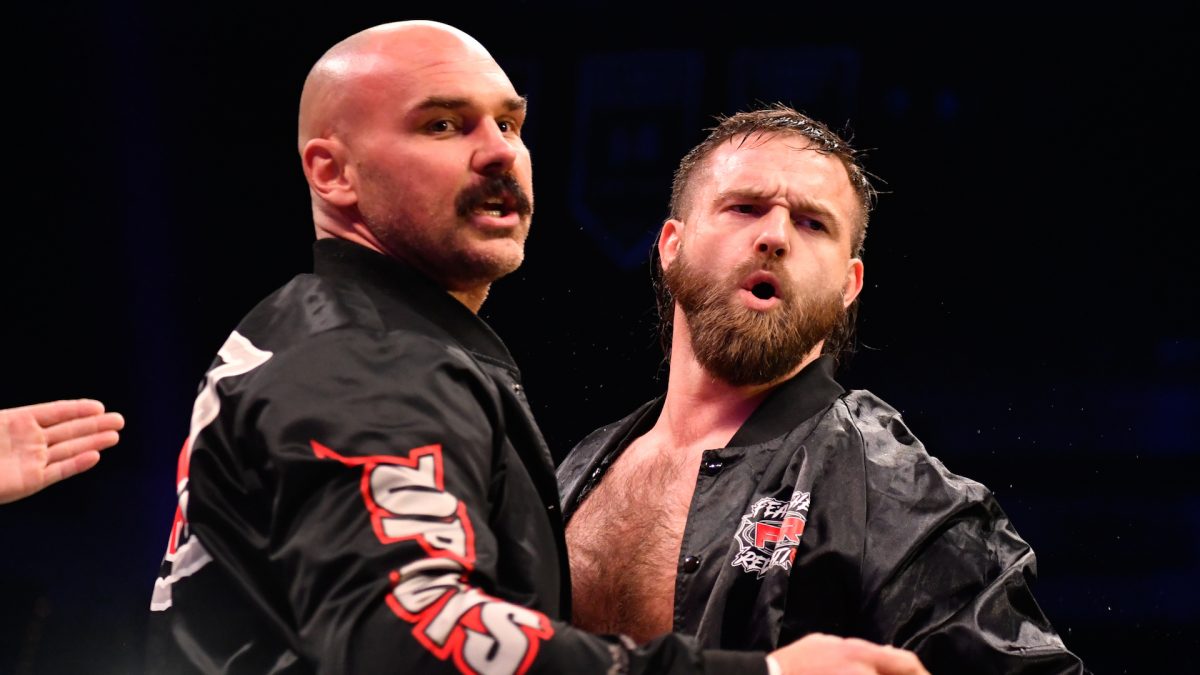 FTR on Interest from WWE – “Do they want us? Or do they want AEW to not have us?”

A recent episode of The Sessions with Renee Paquette podcast had FTR’s Dax Harwood and Cash Wheeler as the guests. One of the topics discussed included FTR’s thoughts on if WWE’s interest in signing them back to the company is genuine or just WWE not wanting AEW to have them.

Dax Harwood – “I think we know about as much as everyone else does. We left that place because they didn’t put a focus on tag team wrestling and we knew there was a ceiling to where we could go in the company. We wanted to do more. We wanted to be known as the greatest tag team of all time. We had to leave there to do that and we knew that. That’s why we were so insistent on them getting us our releases. Now, I see the screenshot of all the different news outlets saying they want to re-sign us and that’s flattering and cool, we got some more time. I told Tony (Khan), because obviously, he heard about it, I told him, ‘There is no way we would ever talk contracts with anybody while we’re working for him.’ We have way too much respect for him and our word means something. I started thinking, do they want us or do they want AEW to not have us? It’s cool for Cody (Rhodes) to do what he’s done, but there are so many unknowns there. Will they ever focus on tag team wrestling like we’ve been able to for the last two years? Money is not everything for us. I do have a family, so I have to take care of them, but it’s not all about the money, it’s about what we leave behind for wrestling.”

Cash Wheeler – “I was driving to the airport when he sent me the screenshot. I was like, ‘is this legit? is this a real thing?’ That’s how I found out, sitting at the airport, getting ready to board the flight, I’m thinking about how crazy this all is and how crazy this year has been. This is one more thing where I’m like, how is this real? I don’t know how much has changed there as far as what we want tag team wrestling to be. We’re getting to show everybody what tag team wrestling can be and what our vision is. It’s buzzed about right now. Tag teams are killing it everywhere, not just us. We’re at the top of that, obviously, but tag team wrestling, in general, is killing it right now and is creating buzz and we have some of the best tag teams we’ve had at the same time in the past couple of decades. Everyone in New Japan, IMPACT, AEW, WWE, MLW, there are so many ridiculously talented teams and we’re getting to help put a focus on that and that’s what we’ve always wanted to do. I was blown away when I read it and it makes you think about a bunch of different things, but right now, we’re getting to paint what we see wrestling’s tag team picture as and I’m happier than I’ve been. I make more money than I have and I don’t want to think about anything other than that and making tag team wrestling and ourselves the best ever. I have two things that are high on the list for me. We want to be the first-ever two-time AEW Tag Team Champions. Until then, or after then, we want the IWGP Tag Team Titles. That’s very important to us and something we wanted to do for a while and wanted to make sure we do it right. We haven’t tried to do anything where we waste it because when we do it, we want tag team wrestling to be talked about and buzzed about. We think that can be something that is cool.”

Sports Illustrated held a recent interview with New Japan Pro Wrestling talent Tetsuya Naito. One of the topics discussed included his thoughts on NJPW and AEW’s upcoming joint Forbidden Door event and who from AEW he would be interested in facing off for a match at the event.

“There is no wrestler I want to call out. The reason is simple. Wrestlers in AEW will all gather and shout, ‘I want to wrestle Tetsuya Naito!’ And, ‘I want to fight Los Ingobernables de Japon!’ It isn’t hard to see this happening. It won’t take long before it does.”

Naito also gave his thoughts about the possibility of reuniting with former Los Ingobernables member Andrade El Idolo at the event.

“Do people want that? Are they interested in me teaming with Andrade? Are they excited? My answer to that, of course, is, tranquilo.”

Variety reported that WarnerMedia and Discovery are currently in the process of cutting back on scripted programming development for their TNT and TBS networks. It was reported that the main reason is due to Discovery wanting to save around $3 billion from their post-merger costs with WarnerMedia. TNT and TBS is the current home television networks of AEW’s television series.

Pro Wrestling NOAH recently announced that they have pulled Kazuyuki Fujita from their upcoming event on April 30th in Tokyo, Japan due to him recently testing positive for COVID-19. It was also announced that as a result of Fujita being unable to compete, he will be vacating the GHC Heavyweight Championship and a new champion to be crowned at their upcoming event. (English translation via PostWrestling.com)

Dragon Gate recently announced that Gamma and Super Shida will be departing the company at the end of this month. In regards to Gamma, it was announced that he will be retiring as an active wrestler after this month. (English translation via PostWrestling.com)

DEFY Wrestling recently announced that their upcoming Wild Ones event on April 30th in Seattle, Washington will air live for free on Pluto TV.

United Wrestling Network recently announced a new match for the card of their Championship Wrestling event on May 17th in Irvine, California: