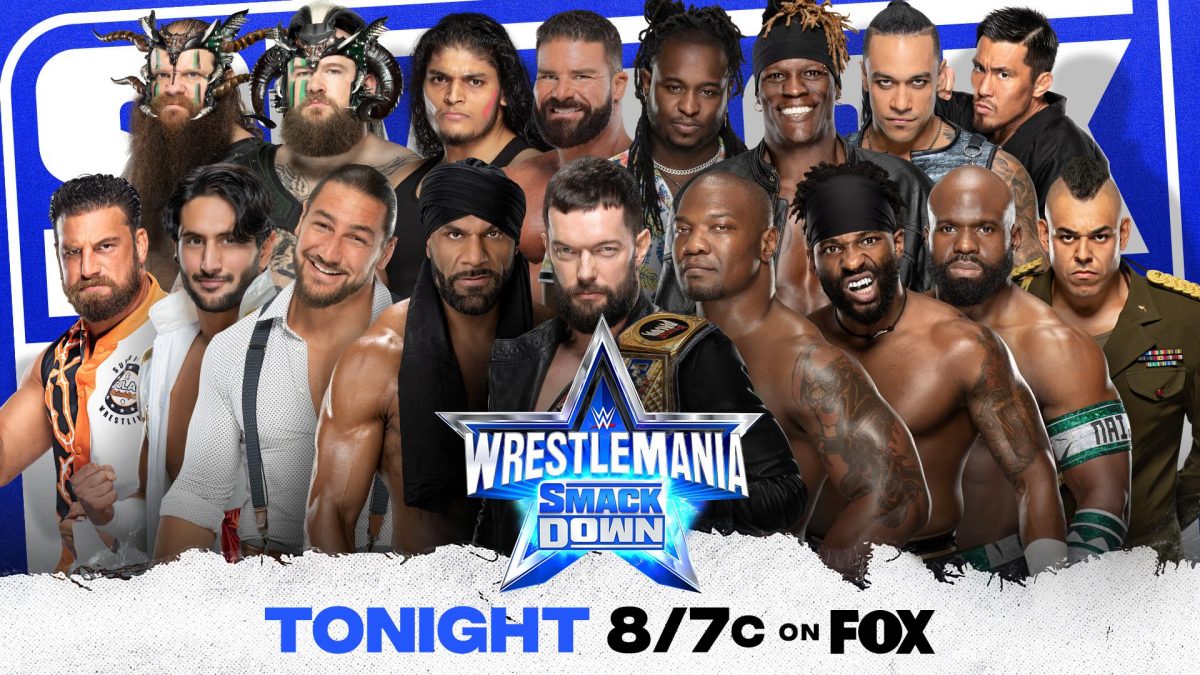 The bell rings an we are under way. Tozawa and Reggie are eliminated. Damien Priest eliminates R-Truth. Jinder Mahal is eliminated by the Viking Raiders.

Shelton Benjamin eliminates T-Bar. Madcap Boss eliminates Drew Gulak. Corbin, who is not in the match, makes sure Madcap Moss is not eliminated. He tells Madcap to focus as they argue. Corbin leaves

He celebrates outside of the ring with the trophy and says he did it all by himself. Ever since he was a kid, he looked up to Andre the Giant and he was his hero. Madcap says he was beloved by everyone just like himself. He also wanted to follow in his footsteps and he did.

Madcap says they all want a joke and asks what do you call a battle royal named after the smartest Texans around? A cattle royal.

Ricochet on the ring apron, he jumps on the top rope but Angel stops him and Humberto with an arm drag off the top rope. Ricochet falls to the outside of the ring. Angel tries to roll Humberto from behind but Humberto turns around. Both men hug.

Sasha gets out of it but Carmella slams her onto the mat. Carmella goes for a big boot but a knee by Sasha. Zelina is tagged in as she runs and a right hand onto Naomi knocking her off the ring apron. Sasha rolls Zelina up and she tags Naomi into the match. In comes Carmella but Naomi with a dropkick onto them both. Sasha is tagged in. Double kicks by Naomi and Sasha onto Carmella and Zelina in the corner. Naomi is tagged in. A split legged moonsault onto Zelina. She goes for the cover and gets the pin.

A video from earlier in the day and it’s Kayla Braxton with Ronda Rousey. She is sparring with Shayna Baszler. Ronda tells Charlotte she can tap out or she can rip her arm off and give it to her family as a souvenir.

WWE SmackDown Women’s Champion Charlotte Flair comes out. She says the master piece that she has created causing Ronda immense pain is more poetic than Oscar winners. She says Ronda is very angry and she is angry that no matter what submission she will try on her, she will destroy Ronda.

Charlotte says Ronda is acting like she has her anger under control but they all know better. She says what is cool is Charlotte Flair. The 13 time Women’s champion, that’s cool. The most dominant woman in sports entertainment, that is cool. Every woman wanting to be her and every man wanting her, that is cool.

Flair says everyone wants her autograph, a selfie with her, that is cool. Beating Ronda to a pulp and walking out of WrestleMania still the SmackDown women’s champion, that is cool.

We cut backstage and Madcap Moss is with his trophy. In comes Corbin with a sword as both men laugh.

As Shinsuke Nakamura is coming down to the ring, Pat McAfee is dancing on the announce table. Austin Theory jumps through the crowd and trips him. McAfee chases Austin Theory to the back as Theory is in McMahon’s office. McAfee opens the door and Vince McMahon comes out. He tells Pat to return to announcing before he cancels their WrestleMania match.

Pat McAfee is back on commentary. The bell rings and we are under way. A chop to the chest by Jimmy but Boogs is still standing. Boogs lifts Jimmy Uso and curls him in the ring followed by a bodyslam. Boogs goes for a gorilla press but Jimmy lands on his feet and slams Boogs shoulder first into the turnbuckle.

Jimmy with a right hand. A double axe by Jimmy followed by a headbutt. Boogs gorilla presses Jimmy into a fall away slam.

Out comes Austin Theory. He grabs a soda from a fan and throws it onto Pat. Michael Cole holds Pat back as Finn Balor throws Theory into the ring. The referee calls for the bell.

Back from commercial and the match is already under way. Theory is in the ring with Boogs and Boogs lifts Theory up and slams him onto the mat. Boogs goes for the cover but Austin kicks out. Balor is tagged in. They double team Theory. Finn with a chop to the chest. He stomps on Theory in the corner.

A snap mare take down by Balor. He goes for the cover but Theory kicks out. Balor to the ropes but Jimmy with a clothesline with the referee distracted. Jimmy is tagged in. Right hands by Balor but Jimmy slams Balor into the corner. Balor thrown to the outside.

Back from commercial, Jimmy with right hands on Balor in the corner. Jimmy goes for the splash in the corner but Balor moves out of the way. Jey is tagged in and he stomps on Balor. Jey with a superkick on Boogs who was on the ring apron. Jey grabs Balor but Balor with a back body drop. Austin Theory and Shinsuke Nakamura are tagged in. Nakamura with a kick onto Theory.

Balor climbs the top rope but Theory trips him up. Theory with the Unproven Cutter. He goes for the cover and gets the pin.

Winners: The Usos and Austin Theory

Pat McAfee gets on the ring apron after the match. Both men are face to face as Michael Cole talks Pat away from him.

Corbin and Moss are in the ring for “Happy Time.” Madcap Moss says they are all happy for him. Corbin says he is his protege, he did that in 2016 in his WWE debut. He says he is happy for Madcap. He says he is euphoric and after WrestleMania they might call him Euphoric Corbin. He raises Drew’s sword in the air.

Corbin says he retired Kurt Angle at WrestleMania and he will destroy Drew McIntyre once and for all at WrestleMania. He says the sword is more of an insurance policy that way no one messes with him. He says when Drew has it, it’s a fancy accessory. But when he has it, it is a dangerous weapon. He says the sword needs to be given a happy name. He names it Euphoria. Drew asks what does Drew McIntyre’s sword and his mother have in common? He lost them both.