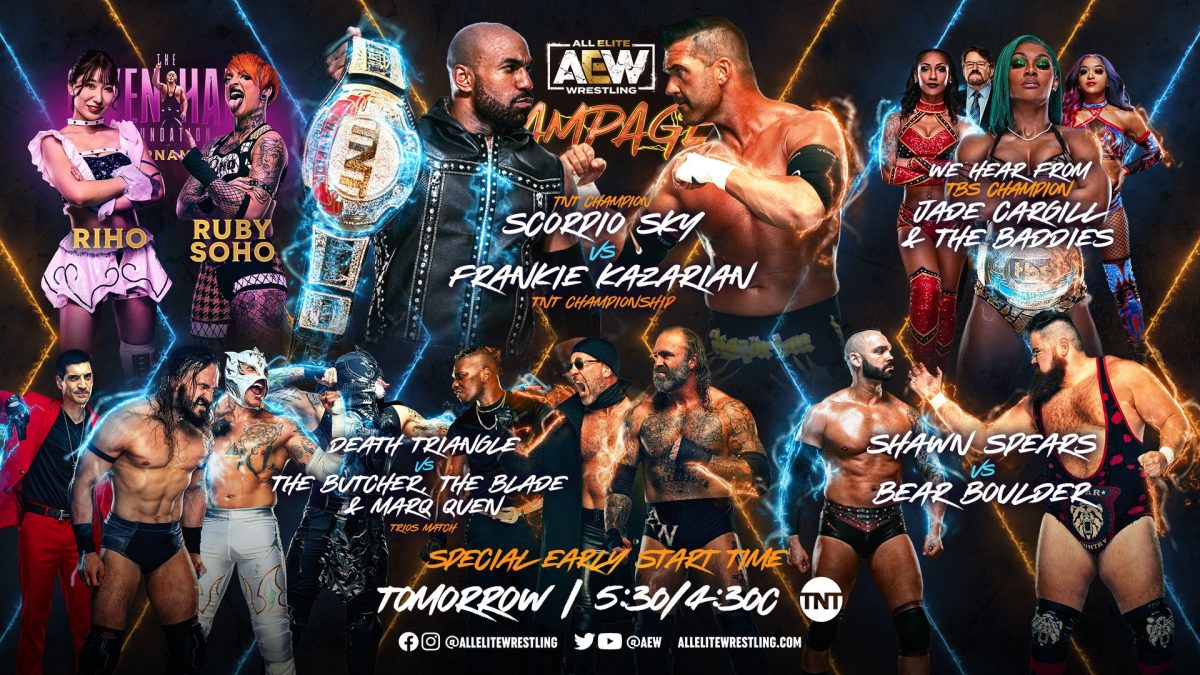 Butcher now comes to the ring in sunglasses like Blade, so it seems that the monocle is gone forever. Death Triangle has the lights out before their entrance now.

Penta and Blade start off the match. Penta gets in Blade’s face and Blade fires back with a haymaker and they trade blows until Pac tags in. Pac holds Blade’s legs for Penta to hit a drop kick from the top in what Taz calls “Yam Bag Yahtzee”. Pac knocks his opponents off the apron and then goes after Blade with kicks. They go to the outside where Butch nails Pac and then tosses him in. Butcher gets the tag.

Pac lays in kicks on Butcher. Pac then hits a drop kick from the top and Butcher rolls to the outside. Pac waits for him and when Butcher gets in the ring, he tags in Marq. Marq comes in for a hip toss, and then Pac rags in Fenix. Marq gets in a few high kicks and drops Fenix with a drop kick. He takes too long to attack Fenix and Fenix hits him with a back body drop. Fenix hits a tornado arm drag and a leap onto Marq. Fenix goes to the ropes and Butcher grabs and hold him there for a kick from Marq to the barricade around the ring as we go picture in picture.

When they return to full screen, Fenix is fighting to his corner and Blade tries to stop him. Butcher and Marq knock Death Triangle of the apron. Marq tags in and hits a 450 for a two count broken up by Pac. Blade tosses Pac out of the ring, Butcher tags in and Marq leaps onto Pac and Penta on the floor. Butcher turns Fenix inside out with a clothesline and a two count.

Blade tags in. He tries for a stalling vertical suplex and Fenix escapes by dropping a knee on Blade’s head. He then hits a Hurricanrana, and then gets the spinning back heel kick. Both men are down and crawling to their corners. Penta and Marq are tagged in and Penta cleans house. Penta tags in Pac. And he starts kicking Marq into oblivion. Pac gets a German suplex for a two count. When Butcher and Blade grab Pac’s legs from the floor, Fenix and Penta leap onto them.

Pac hits another German suplex, Penta tags in and Fenix then tags in and they hit the fear factor. Pac tags in and Pac hits the Black Arrow for a three count.

He then grabs a chair and goes after Bear with it, wails on him a few times and goes to the back, his point made.

Is that Smart, Mark… to put $10K on @TonyNese?! The #PremierAthlete & @MarkSterlingEsq will collide with HOOKHausen (@730Hook & @DanhausenAD) at #AEWDoN (Double Or Nothing) Buy-In LIVE on Sunday, May 29th!

Tune in NOW to #AEWRampage on TNT! pic.twitter.com/F7UgYmpCgk

Lexy interviewed Smart Mark Sterling and Tony Nese. Sterling was upset he was in a match and said he doesn’t even have tights. Nese was confident and said everyone should put $10,000 on them.

They shake hands before starting.

They lock up collar and elbow, and go to the ropes for a clean break. Ruby and Riho trade wrist locks and then to arm bars. They go to the ropes and Ruby hits a shoulder tackle. She covers and Riho bridges out and Ruby stops Riho’s comeback with a kick to the midsection. Each tries to take the other down until Riho is able to get the spinning head scissors.

Riho gets a casadora roll through and a stomp. Riho gets the running elbow strike.

Ruby is able to get to the other corner and uses her feet to slam Riho into the buckle and covers for the two count. Ruby leaps and Riho rolls out of the way. Ruby may have tweaked her knee. They trade blows and Ruby goes for No Future but Riho blocks it and does a leg based bow and arrow with a bridge. Ruby gets to the ropes for the break.

They fight in the ropes and Riho kicks Ruby in the chest and hits a diving foot stomp onto Ruby’s back. They go to picture in picture

Riho runs in for the stomp, but Ruby blocks it and hits Riho with a driver and covers for a two count. Ruby hits another drop for a two. Ruby then hits the blade runner for a pin and a three count.

Ruby pulls her up and they both raise hands.

We then get a promo from the Gunn Club and The Acclaimed. Billy Gunn wants them to form a faction. They just need a catchphrase and some hand gestures. The Gunn Club suggest some DX gestures, but Billy Gunn shoots them down and says that will never get over. The Acclaimed suggest their own “scissoring” gesture and “Yo, listen” catch phrase and the Gunns love it. Billy says he used his pull and got them a match. They ask if it’ll be at the PPV, Dynamite, or perhaps Rampage. Gunn says it’s this Monday on Dark: Elevation, and they all scream in excitement.

Tony Schiavone is in the ring to talk to Jade Cargill and the Baddies.

She gets to swear, so she gets to drop the S-Word. Tony says that Hikaru Shida is injured and can’t compete in the tournament. Jade asks what happened to Mark Sterling and since he is in a neck brace and a crutch, and she cuts him off. Since Shida can’t wrestle, Jade says Red Velvet gets to advance, and Tony says no, she’s been replaced with Kris Statlander, who comes out with new hair and makeup.

Kris stares them down from the stage.

It’s time for Scorpio Sky and Frankie Kazarian to have their Main Event interview with Mark Henry. Ethan Page speaks FOR Sky and then Sky says I will give him a match because he gave him his word. Sky says he doesn’t want Page and Dan Lambert with him. The time for talking is over and now it’s time for the Main Event.

We see that Tay Conti and Sammy Guevara are at ring side. They now have the AAA mixed tag titles.

They shake hands and get started. They lock up and roll to the ropes and corners and break clean. They lock up again and Frankie hits a fireman’s carry and they both work arms bars. They run the ropes and Frankie hits a shoulder block and covers for a one count. They trade waist locks. Frankie gets a hip toss and then locks his arm in a short arm scissor. Sky rolls over and gets a one count before Frankie takes control.

They run the ropes and each try for a finisher, and then go back to running and collide. They have a solid sequence of holds and near falls with grappling and throws. Frankie goes to the floor and Sky hits a tope and nails Frankie as we go picture in picture.

When they return to full screen, both men have been going hold for hold, countering anything the other throws at them. Frankie is able to hit a knee lift lariat combo. Frankie goes for an Irish whip and they trade blows off the ropes. Sky goes for a TKO and Frankie counters with a full body slam into a roll up and a two count. He then hits the leg drop for a two count.

Frankie almost gets on the chicken wing, but Sky counters with a jaw breaker. They battle in the ropes. Frankie brings Sky into the ring by pulling on the ropes and hits a cutter for a two count. Frankie goes for the chicken wing and Sky keep fighting it to keep the hold from being locked on. Sky tries to push off the ropes but Frankie keeps the hold on.

Dan Lambert runs to the ring and distracts the ref and Ethan Page nails Frankie with the title. Sky pins him but only gets a two count. Sky is able to hit the TKO and covers for the three count.

After the match, Sky starts to help Frankie up, and Frankie explains what Ethan Page did. Sky and Ethan get into an argument. They go face to face and then Sky nails Frankie with the belt. Dan yells, “I love it when a plan comes together.” Dan taunts Sammy as Sky and Ethan attack Frankie. Tay and Sammy hit the ring and the Men of the Year bail and we are desperately out of time!