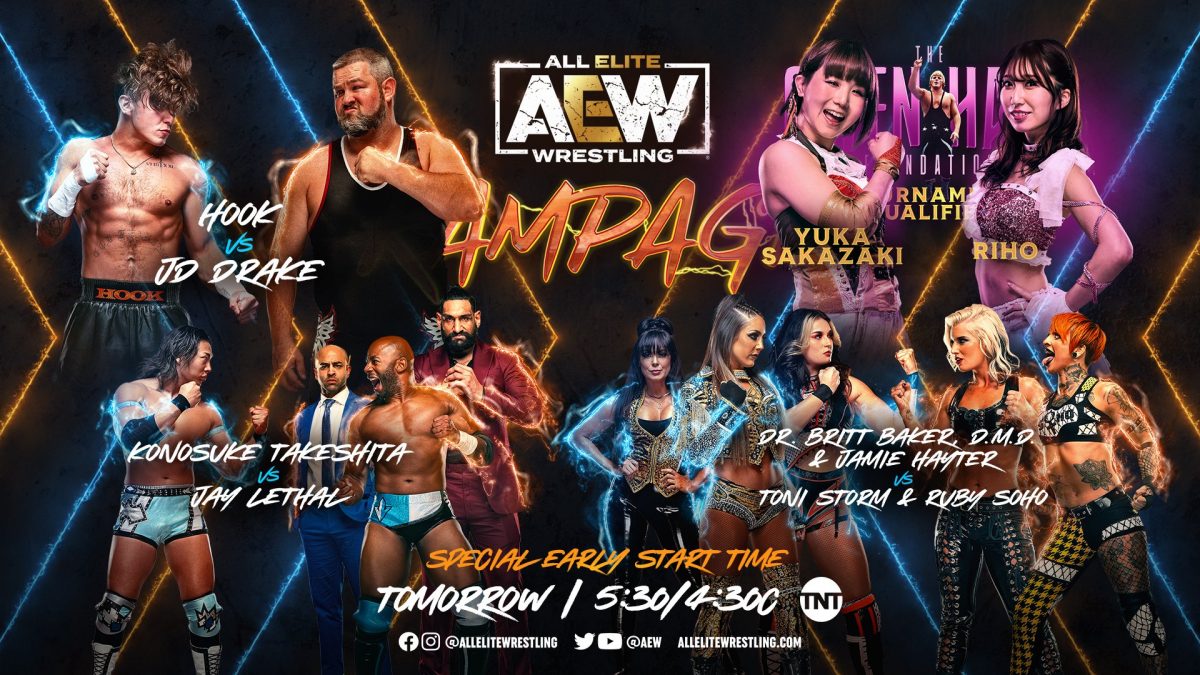 The bell sounds and we’re off-and-running with this one, which features Storm and Hayter kicking things off in the ring for their respective teams.

We see some back-and-forth action early on and then the duo of Baker and Hayter start to take over on offense. On that note, we head to a mid-match commercial break.

When we return from the commercials, we see Baker and Hayter fighting to maintain their offensive lead. Eventually we see Soho and Storm take over.

As the action continues, some double-team work by Baker and Hayter lead to a huge superplex off the top rope. This shifts the momentum back into the heel duo, but not for long, as a roll-up out of nowhere from Storm gives her team the three-count victory.

Then we head back to the commentary desk where we hear from Excalibur that they are receiving a phone call.

We come to discover that it is Eddie Kingston on the line to talk to Rampage co-commentator Chris Jericho.

“The Mad King” talks about seeing his wife cry and how that image is burned into his soul. He vows to make Jericho pay and feel the same fear and pain that his wife had to go through because of what he did.

.@MarkSterlingEsq & @TonyNese formally request a match with ‘the idiot that everyone loves’ @DanhausenAD NEXT WEEK in Nese’s hometown of Long Island, NY!

Tune in NOW to #AEWRampage on TNT! pic.twitter.com/GXvq6h6KL7

We shoot backstage after that and we see “Smart” Mark Sterling standing by with “The Premier Athlete” Tony Nese.

Nese cuts Sterling off as he handled the verbal intro, and he makes it clear that next week’s show will feature himself going one-on-one against Danhausen.

When we return from the commercials, we hear the familiar sounds of Action Bronson playing as Hook is introduced. He heads out and makes his way down to the ring as highlights are shown from last week’s show of Tony Nese ambushing Hook after his match.

We return live and see him standing in the ring across from his opponent, JD Drake, who made his entrance during the aforementioned break.

The bell sounds and we’re off-and-running with our first singles bout on this week’s show. Straight out of the gate we see Hook manhandling the much larger Drake.

Hook executes all kinds of throws and suplexes on the big man. He goes for another suplex and Drake hoists him up to try and block it, however Hook goes all the way over and lands on the big man’s back in his “Red Rum” submission finisher for the win.

As soon as the match wraps up, we see the lights in the building go out. Danhausen makes his way down to the ring.

Danhausen gets on the mic and brings up his upcoming match against Tony Nese. He mentions that Mark Sterling and others could be there to help Nese and asks if Hook will be in his corner.

The fans chant “Yes!” but Hook is thinking differently. Danhausen gets overly friendly, putting his hands on Hook and Hook shoves him down.

Danhausen leaves a gift for Hook in the ring, a bag of chips with a bow wrapped around it, and rolls out of the ring. The commentators think he’s going to change his mind but ultimately he does not, as he drops the gift and heads to the back.

Tune in to #AEWRampage NOW on @tntdrama! pic.twitter.com/4sUI8aLg5L

We shoot backstage to a quick word from FTR. Dax Harwood speaks up, vowing to gain revenge on Adam Cole and reDRagon for getting one over on him. Top guy — out.

We see some highlights to explain the back history heading into our next bout, which is a qualifying match in the Owen Hart Foundation Women’s Tournament.

Riho and Yuka Sakazaki are both in the ring now and the bell sounds to get this one off-and-running.

Sakazaki takes Riho down out of a head lock coming straight out of the gate in this women’s one-on-one showdown.

We see Sakazaki end up fighting into offensive control in this one and then Riho starts to land some good shots and spots as we head to a mid-match commercial break.

As we settle back in from the break, we see these two take this one to a whole other level, getting the crowd totally involved by popping the Baltimore fans on a regular basis with awe-inspiring high spots.

When all is said and done, we see Riho land a trip into a roll-up to score the three-count victory and qualify for the Owen Hart Foundation Women’s Tournament.

“Even Superman has kryptonite.” @shawnspears issues a stiff warning ahead of this WEDNESDAY’s Contract Signing between @The_MJF and @RealWardlow on #AEWDynamite.

Tune in NOW to #AEWRampage on TNT! pic.twitter.com/hVftvZT6op

We shoot to a special message from “The Chairman of AEW” Shawn Spears after a quick look at the updated brackets for the Owen Hart women’s tourney.

The Pinnacle member and MJF’s right-hand man goes on to talk about Wardlow once again thrwarting their attempts to have him beaten after he scored the “W” over W. Morrissey this past Wednesday night.

Spears goes on to make it clear that this will not be the case when they see what’s in store for him on next week’s show.

We shoot to the ring again after the Shawn Spears segment, and we see Dan Lambert and The Men of the Year.

Lambert mentions being from Baltimore but notes that he’s sick to his stomach to be standing in an AEW ring in said-town.

He and Ethan Page make a few comments and then we hear from the former “Elite Hunter” himself, as fellow former SoCal Uncensored member Frankie Kazarian confronts fellow SCU member Scorpio Sky about his promised TNT title shot.

The guys all take shots at Sammy Guevara, and more so Tay Conti, during this segment, which wraps up with Kazarian demanding his title shot and getting it. Next week we will see Kazarian vs. Sky for the TNT title. After this, we head back to another commercial.

.@boy_myth_legend absolutely laying out FTW Champ @starkmanjones tonight on #AEWRampage ahead of the #FTW Championship this WEDNESDAY on #AEWDynamite!

Tune in to #AEWRampage NOW on @tntdrama! pic.twitter.com/9TUFQrFI1K

When we return from the break, we are informed of a scheduled showdown between Jungle Boy and FTW Champion Ricky Starks.

Jungle Boy beats down the AEW Rampage commentator and Team Taz member as the announcers question if we will see the FTW title finally change hands next Wednesday night.

We head to the backstage area where Mark Henry hosts his usual weekly pre-main event split-screen interview with the competitors involved in the final match of the evening.

With that said, we hear from Konosuke Takeshita, who talks about being ready for action tonight in his broken English.

Jay Lethal and his squad respond by bringing up their recent interaction with Samoa Joe and questioning if he’s not afraid of his new giant, Satnam Singh. He vows to give him something afraid of when he beats down Takeshita in tonight’s main event.

With that said, we head back inside the arena where “The Dapper Yapper” Justin Roberts handles the pre-match ring introductions of Jay Lethal. Lethal emerges and heads to the ring accompanied by Satnam Singh and Sonjay Dutt.

As the trio heads to the ring and settles inside, we see highlights from last week’s show where Lethal and Joe duked it out after the main event.

Already in the ring is his opponent, Yokosuke Kaneshita. As he is introduced, we see highlights of his last run in AEW.

Back live, we hear the bell sound to kick off our main event of the evening here on this week’s AEW on TNT television broadcast.

Takeshita is put over by the commentators coming out of the gate in this one, as they bring up his decorated background and mention his championship status in the DDT promotion.

Meanwhile, Takeshita is backing up the hype in the ring with some impressive early offensive control over Lethal. This doesn’t last for long, however, as Lethal starts to take over from there.

We head to a mid-match commercial break as Lethal secures his offensive control in the contest. When we return, we see Takeshita fight his way back into control of things after connecting with a beautiful flying lariat off the top-rope.

From there, Takeshita gets a couple of super close-calls on near fall attempts. Ultimately, however, Lethal takes the knee from Takeshita out of commission. He then connects with a back-Lethal Injection right on the money for the pin fall victory.

After the match wraps up, we hear Jay Lethal get on the microphone after the match after being reminded of Samoa Joe saying he will invoke fear into him.

Lethal asks if Joe isn’t afraid of him and then begins a three-on-one beatdown of the already flattened Takeshita.

They go to work on him for a bit and then The Best Friends emerge. The duo are accompanied by Orange Cassidy, but the crew is not able to handle Lethal, Dutt and Singh by himself.

Finally, the familiar sounds of Samoa Joe’s theme hits. The fans chant “Joe! Joe! Joe!” as he emerges and begins heading to the ring.

The ROH TV Champion is held back by security and that’s how this week’s show wraps up, as Excalibur plugs the start of the Owen Hart Tournament on next week’s Dynamite.