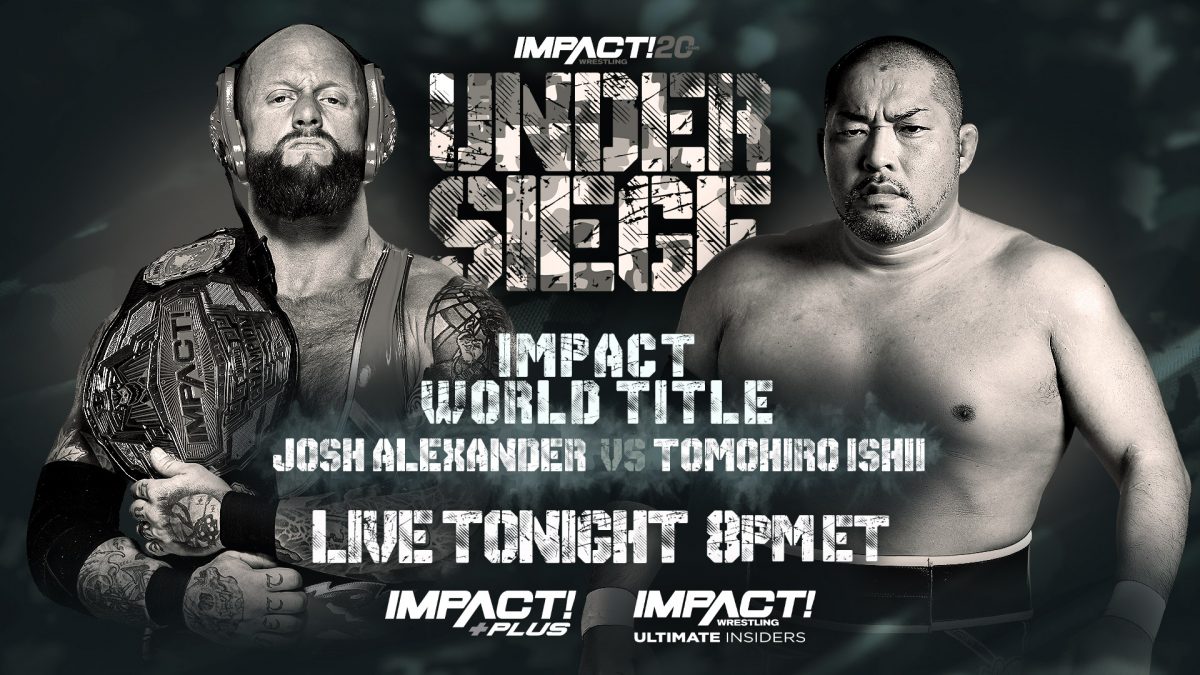 Both of these teams are willing to do whatever it takes to become one step closer to a coveted IMPACT World Tag Team Title opportunity. Rhino takes Singh off his feet with a running shoulder tackle. Singh distracts the referee, allowing Shera to deliver a right hand to Rhino from the apron. Singh hits a Flatliner on Heath for two. Singh and Shera cut off the ring as they begin to wear Heath down. Heath gets his boots up to create separation and make the tag to Rhino. The pace quickens as Rhino goes on the attack. Rhino Gores Singh to score the victory!

Buckle up for X-Division action between these three high-flyers! Bailey delivers a series of kicks to Kid, sending him to the outside. Swann takes out both of his opponents with a senton off the apron to the floor. Bailey hits a twisting suplex on Kid, then floats over into an ankle lock on Swann. Moments later, Swann hits a step-up kick on Kid for the two count. Kid hits a top rope driver on Swann, sending him crashing into Bailey below. Swann connects with the handspring cutter on Kid. Bailey almost puts Swann away with a pinpoint kick to the head. Kid soars with a springboard splash to Bailey but Swann breaks the count with a splash of his own. Swann hits the Phoenix Splash on Kid to win!

Gisele Shaw vows to steal the spotlight from Madison Rayne to kick off Under Siege! Shaw hits a series of running uppercuts in the corner. Shaw sends her retreating to the outside with an arm drag. Shaw remains in control as she hits a springboard splash. Rayne distracts the referee, allowing Dashwood to grab Shaw’s leg from the outside. Rayne capitalizes and blindsides her to gain control. Rayne hits a Northern Lights suplex for two. Shaw comes back with a Superplex to turn the tide. Shaw connects with a draping DDT but Rayne kicks out at two. Rayne spikes her opponent head-first into the mat but Shaw somehow kicks out before the referee’s count of three. Dashwood grabs Shaw’s leg but Alisha neutralizes her at ringside. Shaw hits a running knee to pin one half of the Knockouts World Tag Team Champions!

Check out what The Briscoes had to say about their upcoming @IMPACTWRESTLING World Tag Team Title match TONIGHT with VBD! @SussexCoChicken @jaybriscoe84 #Undersiege pic.twitter.com/qhmuHKUSm8

Gia Miller interviews The Briscoes ahead of their IMPACT World Tag Team Title opportunity against Violent By Design. They say that the trend of them capturing tag team gold wherever they go will continue tonight!

Steve Maclin is out to prove that he deserved to be the #1 Contender for the IMPACT World Title by taking on Chris Sabin! Maclin is sent for a ride when Sabin hits him with a Hurricanrana in the early going. Sabin attempts a senton but Maclin catches him in mid-air and hits a powerbomb into the apron. Maclin remains in control with a double under-hook backbreaker. Maclin sends Sabin crashing into the turnbuckles, then soars with an elbow drop off the ramp to the floor. Sabin is Caught in the Crosshairs as Maclin drives his shoulder into his midsection. Sabin counters Mayhem For All, then creates separation with a tornado DDT. Sabin hits a neckbreaker on the floor, followed by a missile dropkick in the ring. Maclin levels him with a clothesline for a very close near fall. Maclin rolls up Sabin with a hold of the ropes but the referee catches him in the act. Maclin hits a German suplex but Sabin comes right back with a strong clothesline. Sabin hits another tornado DDT, followed by the Cradle Shock to win!

Taya Valkyrie and Deonna Purrazzo settle the score with the AAA Reina de Reinas Title up for grabs! Purrazzo blindsides Valkyrie before the opening bell to gain the early advantage. Purrazzo targets the elbow of Valkyrie as she stomps on it. Purrazzo wears her down with a series of submissions. Valkyrie breaks free and hits a Blue Thunder Bomb for two. Valkyrie hits a snap German suplex off the ropes, then counters Queen’s Gambit into a double foot stomp. Valkyrie plants her face-first into the canvas but Purrazzo kicks out at two. Purrazzo returns the favor as she then drives Valkyrie into the mat. Purrazzo hits the Queen’s Gambit but it’s not enough to keep Valkyrie down. The referee stops Purrazzo from using the title as a weapon as Valkyrie rolls her up for three!

After the match, Purrazzo attacks Valkyrie from behind until Mia Yim makes her shocking IMPACT return! Yim is about to hit the Package Piledriver but Purrazzo breaks free and escapes up the ramp.

Trey Miguel receives his rematch for the X-Division Title as he battles longtime rival Ace Austin! Miguel attempts a springboard but Austin brings him to a screeching halt with an arm drag. Austin hits a running crossbody, sending both him and Miguel toppling to the floor. Austin hits a pinpoint kick to the chin of Miguel. Austin avoids a springboard Moonsault, then delivers a stomp into the canvas for two. Miguel counters The Fold and spikes him head-first into the mat. Miguel locks in a modified Dragon Sleeper but Austin fights out of it. Both men exchange strikes in the middle of the ring. Miguel almost puts him away with a split-legged Moonsault but it’s not enough. Miguel connects with a neckbreaker on the hardest part of the ring. Austin avoids the Meteora, then hits The Fold to retain the X-Division Championship!

Things are breaking down at #UnderSiege between the Bullet Club & Honor No More!#IMPACTWRESTLING pic.twitter.com/fknT1EhzD9

Prepare for war as two of the biggest factions in professional wrestling today collide in a 5-on-5 showdown! The match immediately turns to chaos as a huge brawl erupts in and out of the ring. King hits Phantasmo with a big spinebuster. Vincent goes for Sliced Bread but Phantasmo counters and makes the tag to Bey. The pace quickens as Bey takes him off his feet with a Moonsault dropkick. White squares off with Taven as the two exchange a flurry of blows. Bullet Club takes turns raking the back of Taven until Honor No More hits the ring to break things up. Gallows takes out both Edwards and King with a double clothesline. Vnicent hits Phantasmo with a Flatliner for two. Taven turns Bey inside out with a twisting neckbreaker, followed by Just the Tip to White. Moments later, another brawl breaks out as chaos reigns supreme. Back in the ring, Bennett and Taven hit the Proton Pack on Anderson to score the huge victory!

Havok has the opportunity to bring the Knockouts World Title home to Decay as she challenges Tasha Steelz tonight! After abducting Savannah Evans to the Undead Realm on IMPACT!, Rosemary has ensured an even playing field for this title clash. Havok puts her power on display in the early going as she tosses Steelz into the corner turnbuckles. Steelz retreats to the outside but Havok drives her back-first into the steel ramp. Steelz takes a page out of Decay’s playbook as she bites Havok. On the floor, Havok crashes and burns on the steel steps. Back in the ring, Havok bounces back with a Death Valley Driver for two. Steelz hits a springboard Bulldog but Havok won’t stay down. Steelz connects with Black Out to retain the Knockouts World Title!

The Briscoes look to add the IMPACT World Tag Team Championship to their long list of accolades but in order to do so, they’ll need to go through Violent By Design! The Briscoes bring the fight to VBD before the opening bell. Doering goes face-to-face with The Briscoes, allowing Young and Deaner to attack them from behind. The match is underway as Mark launches himself over the top rope, taking out Young on the floor. Jay is next to fly as he collides with Deaner. Violent By Design turns the tide as they wear The Briscoes down. Mark picks Deaner off the top and slams him into the mat. Mark hits Deaner with a running boot, followed by a neckbreaker powerbomb for two. Young spikes Mark with a Death Valley Driver for a near fall of his own. Mark almost puts Young away following a top rope elbow drop. Young bites Jay, then connects with his signature elbow drop. The Briscoes hit the Doomsday Device on Deaner to win the match and become the new IMPACT World Tag Team Champions!

Former IMPACT World Champion Moose addresses the crowd in the middle of the ring. Moose says that he’s done some terrible things over the last few months but he doesn’t regret his actions because they made him the greatest champion that IMPACT Wrestling has ever seen. Moose complains that he only had five days to prepare for his IMPACT World Title rematch, which he lost to Josh Alexander.

The lights go out as Sami Callihan makes his shocking return and goes face-to-face with Moose. Callihan attacks him with his signature baseball bat, then lays him out with the Cactus Driver 97!

It’s “Walking Weapon” vs “Stone Pitbull” as Josh Alexander makes his second defense since winning the title just two weeks ago at Rebellion! Alexander delivers a series of chops in the corner. Ishii hits a vertical suplex to gain momentum. Now it’s Ishii who chops Alexander as he mixes in a flurry of strikes. Ishii begins to target the neck and throat area of Alexander. Moments later, Alexander hits a big boot, followed by a running crossbody to Ishii’s back. Alexander hits a trio of German suplexes but Ishii kicks out at two. Ishii connects with a thunderous belly-to-back suplex. Alexander locks in the Ankle Lock but Ishii rolls through into an Ankle Lock of his own. Alexander counters the counter and locks in the Ankle Lock once again but this time, Ishii rolls to the ropes in order to break the hold. Alexander spins him off of his shoulders for a very close near fall. Ishii counters the C4 Spike into a back body drop but Alexander comes right back with a German suplex. Ishii hits a delayed vertical Superplex. Alexander powerbombs Ishii into his knee but misses the Moonsault. Alexander hits a powerbomb, followed by the C4 Spike to score the victory!

Josh Alexander celebrates with the IMPACT World Title held high as Under Siege goes off the air.