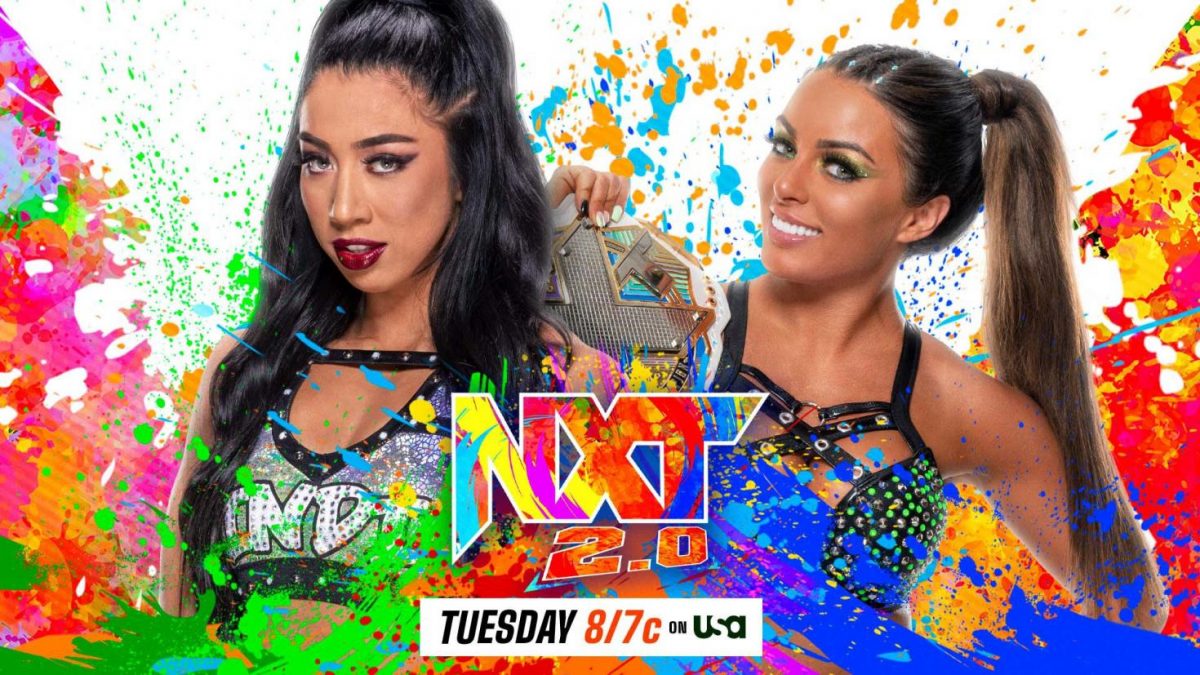 Tony D’Angelo is in the back with Two Dimes & Stacks (Channing Lorenzo and Troy Donovan). Tony says Legado thought it was cute last week and Santos had to hit him with brass knuckles. You better be paying close attention to what Stacks and Two Dimes do tonight because that is a taste of what is going to happen to you. Santos appears behind them and he puts on his sunglasses.

We see Legado Del Fantasma in the back and Escobar says it is time to go to the ring.

Blade with a jumping leg lariat and Donovan sends Enofe into the ring post. Lorenzo with a clothesline and both men are down.

We see Legado del Fantasma make their way to the entrance.

Donovan tags in and they hit a double punch to Blade followed by a double boot to the head for the three count.

After the match, Tony D’Angelo gets on the mic and tells Legado to get in the ring. All six men brawl and officials make their way to the ring to try to separate everyone.

McKenzie Mitchell is with Wes Lee. She asks him about what he did with Sanga. Lee says he was on pure adrenaline when he confronted Sanga. He did not make a mistake. He felt disrespect and he stands by what he said and his challenge. McKenzie says it did not seem like disrespect and Lee says it might not have been disrespect to you but I need to prove to people like Sanga that I can.

After the match, Xyon Quinn enters the ring while Sanga goes to the aisle. Quinn takes off his glasses and puts them in his jacket.

Sanga grabs Quinn from behind and Quinn backs away when Sanga turns around to him. Sanga helps Lee up.

Cora Jade and Roxanne Perez are in the back and Cora mentions tonight is the semifinals. Roxanne says that Lash is twice her size. Cora reminds Roxanne about her match in Texas when Jenna threw their bags in the hallway. Roxanne asks Cora if she wants to watch Elektra Lopez and Alba Fyre in the back but Cora says she wants to watch it in the crowd.

Bron enters and he sees a photo on his locker and Bron says it is from twenty years ago.

Fyre with a rollup for a near fall. Fyre with a head butt and she goes up top and hits a swanton for the three count.

After the match, Lopez knocks Cora’s bucket of popcorn out of her hands and has some words for Cora.

Damon Kemp is in the Diamond Mine room and he says he will keep him updated.

The Creeds enter and Kemp says the match isn’t happening because Roddy rolled his ankle. Julius says you don’t do that. He mentions that Brutus almost blew out his knees and ankles with his cannonball. Ivy says that is the Diamond Mine way. Damon says he is here to earn his spot in Diamond Mine.

McKenzie Mitchell is with Fallon Henley. Mckenzie mentions that Nikkita is out of the tournament with an injury. Fallon says she was looking forward to facing Nikkita.

Tifffany Stratton shows up and asks Fallon if she is going to take the easy way to the finals. Tiffany says that Country Dumb and Dumber.

Fallon tells Tiffany that she cannot get away with that and if you want to have a match, go make it official.

Toxic Attraction walk in the back and Mandy Rose tells Indi Hartwell calling her out was the biggest mistake of her career.

They lock up and Rose with a side head lock and Hartwell with a shoulder tackle. Indi with a wrist lock and arm wringers. Indi works on the shoulder and turns it into an arm bar. Mandy gets to the ropes and Indi releases the hold. Mandy sends Indi to the mat and gets a near fall. Mandy with a wrist lock and elbow to the arm. Mandy with an Irish whip and a running boot into the corner. Mandy with a snap mare and kick tot eh back for a near fall. Mandy sends Indi into the turnbuckles. Indi drops Mandy on the turnbuckles and connects with short arm clotheslines. Mandy goes for an O’Connor Roll but Indi holds on to the ropes and Indi with a side slam for a near fall.

Gigi Dolin, Jacy Jayne, Katana Chance, and Kayden Carter bring their fight to ringside while the match continues. Jacy and Chance fight into the ring and Indi with a boot to Jacy but Mandy hits Indi with a running knee to get to the three count.

While Jacy, Gigi, Katana, and Kayden fight to the back, Wendy Choo attacks Mandy from behind and she reveals that her pillowcase was full of balls.

Bron Breakker is in the back with McKenzie. She asks Bron about the photo he found and if Joe has gotten to him.

Bron says that Gacy is trying to get him to snap but Gacy will not get him to lose his focus.

She asks Bron about his match with Duke Hudson and a video of him playing football in high school is on MONITOR and Bron mentions that his dad was supposed to be there but he was in Japan.

Kit and Elton talk about how it is a shame that there are problems with the Diamond Mine. They mention that the Diamond Mine didn’t get them for what they did to their dojo. They will not be beat and their name is synonymous with tag team wrestling.

After the match, Grayson Waller comes to the ring to celebrate with Tiffany.

Kayden Carter and Katana Chance are with McKenzie Mitchell. Chance says she told people to stop taking their kindness for weakness. We came after Toxic Attraction. Kayden says Toxic Trash can take their titles.

Wendy Choo shows up and she likes the sound of that match and the sound of her soccer balls on Mandy’s face. Wendy says Kayden and Katana can win the tag titles while she leaves with the NXT Women’s title.

Jiro goes up top and hits a tornado DDT for a near fall. Wagner blocks a kick and he pulls Jiro’s jacket over his head and Wagner punches. Wagner gets Jiro up and hits a neck breaker for the three count.

After the match, Sofia Cromwell signals to Wagner to finish Jiro. Josh Briggs makes the save and he punches Wagner. Cromwell holds Wagner back.

We see Tony D’Angelo leaving with Troy and Channing. Tony says this has to end at In Your House. If Santos is a business man, he wants one more business meeting and they will go to him. Channing reminds him about what happened the last time with AJ. Tony says he will have an offer that Santos cannot refuse.

Robert Stone tells Von he has pissed off a lot of people. Jiro is done. He tells Von he needs eyes in the back of his head. Sofia says that Von is getting feathers ruffled and he is doing his job.

Mandy Rose is on the GameTron and she tells Wendy she is done. Now you want a chance at my title. The thought of you carrying this or touching this makes her sick. You want to play jokes? You are the jokes. You are a kid and I am a woman.

Jacy says that Kayden and Katana say they are the only team. They will send them back to Little Munchkin Land with the other Oompa Loompas. We make it look easy and you can’t keep up. Gigi says you saw how fast we rose to the top while you struggle for a taste at what we have. You will get your chance at In Your House. Let’s make it official next week.

We go to Carmelo Hayes and Trick Williams in the barber shop. Hayes mentions In Your House and he says he needs to get his title back. Williams says Hayes needs the gold around his waist. Hayes says he is not the same since he lost the title. Williams says he is still the same man.

Cameron Grimes shows up and he says he just wants to talk. Grimes asks if Melo thought he was going to jump him from behind. He wants to speak eye to eye. We crushed you last week and you said something about him being lucky.

Hayes says everyone but him were happy to see Grimes win the title. You don’t hold the title the way I hold that title. You are not The A Champion.

Grimes says he might not deserve it, but he earned the title. Grimes says that there is a new guy who they say is faster or better than Hayes. He will face Ben Carter next week and he will know that he is better than Carmelo Hayes.

We are back and we see footage of extravagance while said in Italian. Giovanni Vinci is coming to NXT. 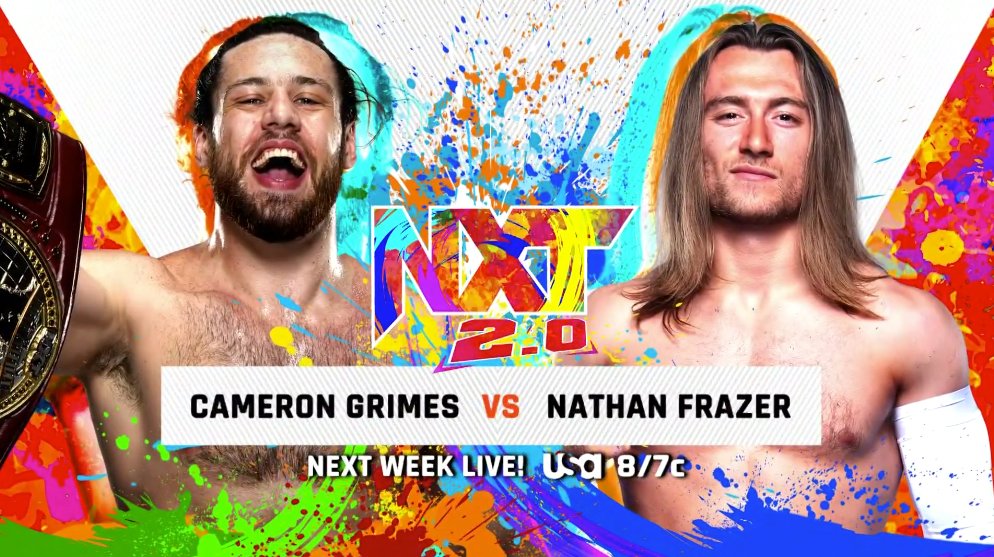 Next week, we will have a Championship Summit for the two women’s titles. Cameron Grimes will face Nathan Frazer. Cora Jade faces Elektra Lopez.

We see Joe Gacy and his hooded men next to him on the balcony.

Breakker sends Hudson to the mat and Hudson tosses Breakker onto the top rope and Breakker bounces off the ropes and falls to the floor. Hudson sends Breakker into the ring steps in front of the Velvet Warriors. They return to the ring and Hudson kicks Breakker and connects with forearms. Hudson with a near fall. Hudson with crossfaces as he tries to apply a Camel Clutch. Breakker escapes and he tries for a Steiner Recliner but Hudson with a shot to the throat. Hudson tries for a power bomb but Breakker counters with a back body drop.