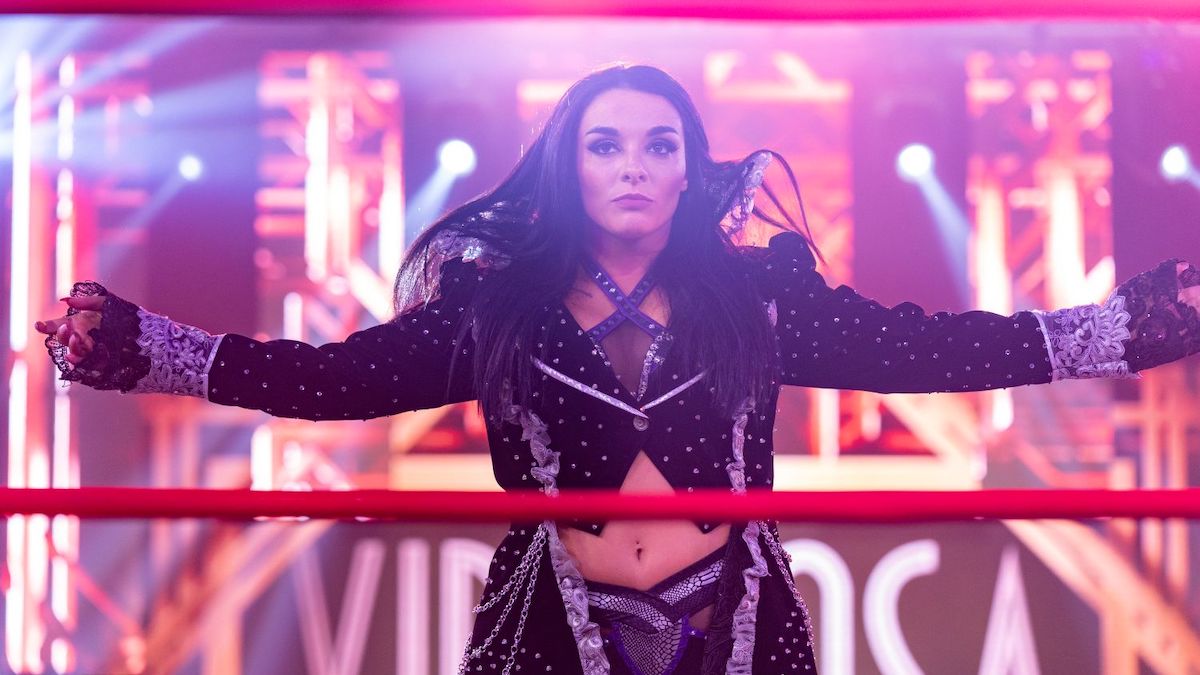 A recent episode of the Universal Wrestling podcast had Deonna Purrazzo as the guest. One of the topics discussed included Purrazzo’s thoughts on main eventing this past Wednesday’s episode of AEW Dynamite.

“Yeah, it was really cool. Obviously, Britt Baker’s my best friend so it was something we had been pushing for-for like a year it seems like now, just to work together in some capacity so it was nice to be there with her and see a lot of familiar faces and I think for me, it was just really full circle because I was supposed to be at ALL IN which is like the precursor to AEW and then that didn’t work out so now, fast forward like two years, when I was released, it was just a weird period. I didn’t know that I was gonna be welcomed at AEW or what. Landed at IMPACT and now, it’s just like everything’s come together. I’m a true believer in everything happens for a reason and the way it’s meant to be and this is my journey and it’s been really, really cool.”

Purrazzo also gave her thoughts on when she was informed that her match against Mercedes Martinez for the ROH Women’s World Championship would be the main event of the show.

“It was like the lead up to it, all day, we didn’t know what the card looked like, where we were gonna be and it’s funny because Mercedes [Martinez] and I were like, ‘We might be the main event. We were the biggest thing on the advertisement but gosh, I don’t wanna be in that spot. That’s a lot of pressure’ and then at 5 o’clock, they were like, ‘So you guys are the main event’ and it was like, ‘Whew!’ A lot of pressure. IMPACT does our live pay-per-views. There’s like four every year and then we do these app specials that are live but I don’t necessarily do live TV every week like people in AEW are so it was even more pressure for me to be like, can I still do this? I hadn’t done live TV since NXT so that’s two years. So I was like, oh gosh, and we have a commercial break and we have a picture-in-picture. There’s so many facets to this that we have to get right because we’re the main event but, I think it turned out really, really great. I think that I got to put my best foot forward, IMPACT’s best foot forward and yeah, it’s just a really exciting time for me right now.”

A recent episode of NBC Sports’ Ten Count podcast had Steph De Lander, former Persia Pirotta in WWE, as the guest. One of the topics discussed included De Lander’s thoughts over the recent claims made by former WWE talent Ember Moon about WWE officials telling their NXT female talent to dress more “sexy.”

“I mean, individually, I wasn’t told anything like that [referring to Athena’s comments about women in NXT 2.0 being told to dress a certain way] but for me, before I came to WWE, you know, I would do bikini photoshoots. That kind of content, I would post on social media. I was very comfortable with all of those things. I obviously can’t speak on behalf of anyone else but, for my own personal situation, I mean when you watch the TV show, you can see there has been a slight shift in ring gear and those kind of — you know what I mean? Like all that kind of stuff, you can see that. I wasn’t told anything directly, but I just kind of saw the change and put myself in the way to kind of move with that change and yeah, as I said, none of that personally made me feel uncomfortable because that’s, as I said, that’s nothing new to me. That’s stuff that I’ve been doing when I was on the indies in Australia and also, all of the female wrestlers that I look up to are that same kind of vibe so I can see how some people would feel uncomfortable with the change in content on the TV show, but for me, I was very comfortable with what I was doing.”

De Lander also gave her thoughts about her being worried at times over being released from WWE since it was both her dream job and relied on the company for her work visa in the United States.

“Obviously I can’t speak on behalf of everyone [if talents in NXT 2.0 felt they could be released from WWE at any moment]. I know some people do. I know for me, it was a big stress and that was something that I kind of struggled to let go of, that feeling and it’s so easy to say like, oh, just don’t worry about it but you know, if that’s kind of your personality and you’re inclined to — and to be fair, that’s my dream job and that’s also my visa to stay in the country so, that’s a lot of stress packed into one thing so to have that feeling of that getting ripped away from you at any moment obviously is gonna create worry for anyone.”

F4WOnline’s Josh Nason reported that the reason why Alex Shelley was pulled from his scheduled match against “Speedball” Mike Bailey at Impact Wrestling’s Under Siege 2022 event this past Saturday was due to schedule conflict issues. Nason reported that Shelley had been booked to compete at an event for No Peace Underground and RPW that day in Detroit, Michigan and honored his commitments with them. Shelley reportedly had been advertised to appear at the indie event since this past mid-April. Nason reported that the cause of the miscommunication nor why Impact went ahead with their original announcement despite Shelley’s outside commitments is currently not known.

This past Monday’s episode of WWE RAW featured Veer Mahan facing off and defeating an enhancement talent named Frank Loman from Hartford, Connecticut. PWInsider’s Mike Johnson reported that the real identity of Loman is indies wrestler Rex Lawless, who has worked for NYWC, Beyond Wrestling, AEW for their AEW Dark series, and other promotions.

As noted before, WWE Hall of Famer “The Million Dollar Man” Ted Dibiase and other members of his family were discovered in October of 2021 to have embezzled the State of Mississippi over welfare funds used for illegal purposes. ESPN reported that the Mississippi Department of Human Services filed a lawsuit this past Monday against DiBiase and several other people and businesses in an attempt to recover millions of welfare dollars spent illegally by them. The lawsuit claims that the defendants had “squandered” more than $20 million from the Temporary Assistance for Needy Families anti-poverty program due to their illegal actions.

Game Changer Wrestling recently announced a new match for the card of I Never Liked You event on June 19th in Providence, Rhode Island:

The National Wrestling Alliance recently announced two new matches for the card of their Alwayz Ready event on June 11th in Knoxville, Tennessee:

Major League Wrestling recently announced two new matches for the card of their Kings of Colosseum 2022 event on May 13th in Philadelphia, Pennsylvania: