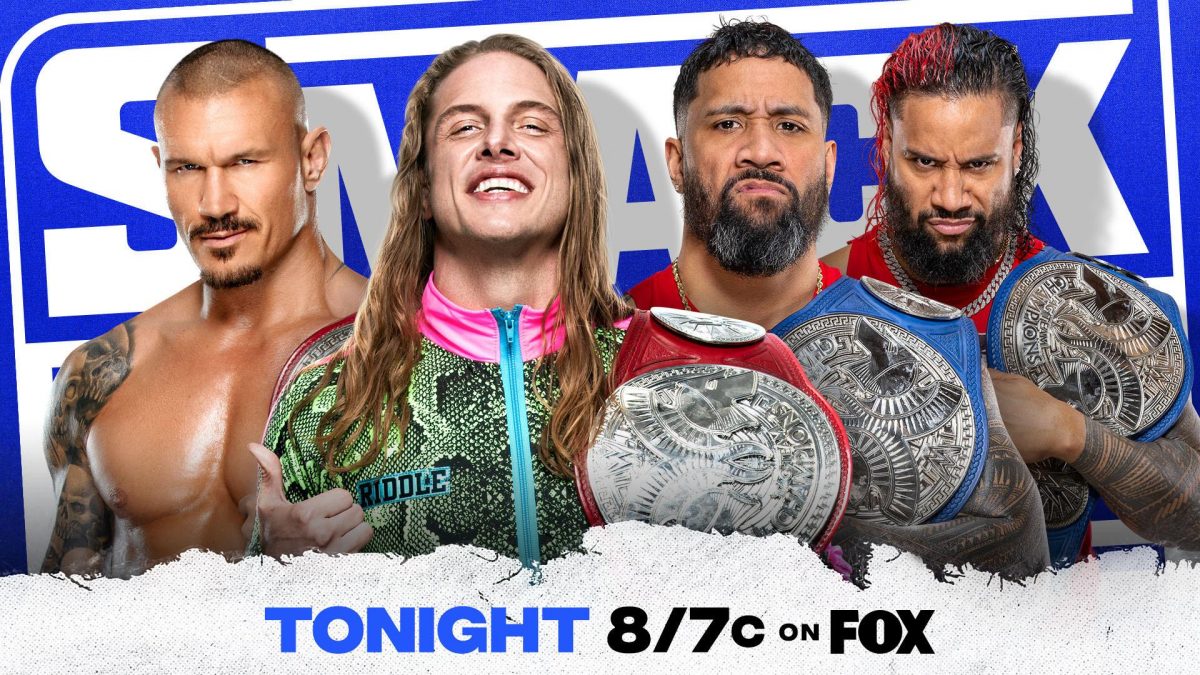 WWE SmackDown kicks off with highlights of the WrestleMania Backlash main event.

Live in the arena, WWE Raw Tag Team champions RK-Bro come down to the ring. Randy Orton welcomes everyone to Friday Night SmackDown. He says his partner Riddle and himself are very excited to be there tonight. But they are also sick and tired of the chase. It’s obvious that The Usos do not have the balls to make any decision for themselves. And it is very obvious that Roman Reigns is the only person that makes any decisions in the Bloodline.

Riddle says he thought they had their match at WrestleMania Backlash in the bag but Roman hit him with the spear. But he can see patterns, it’s his sixth or seventh sense. And every time The Usos cannot handle business, Roman Reigns comes in and handles it for them.

Orton says he is right and they are all sick and tired of it. He says RK-Bro demands to become the undisputed WWE tag team champions of the world. Orton tells Roman Reigns to come down to Orton’s ring.

Out comes Sami Zayn to the ring wearing a Bloodline shirt. He asks if they do not understand the way things work on SmackDown. He says they cannot get Roman Reigns when they want. But as locker room leader, he is happy to speak on his behalf. He says he thinks he speaks for the Bloodline and the entire Smackown locker room and even the WWE Universe when he says no one wants to see this tag team title unification match.

Zayn says more importantly, they don’t want this match because if it happens, they will lose. Zayn says he is trying to handle this with diplomacy. RK-Bro have a great thing going. The fans chant “Sami sucks” as he stops talking. What he suggest is they take their titles and go back to Raw and not to come back.

Orton says he told Roman Reigns he wanted to come out here. Riddle calls him rusty because his hair is the color of rust. The fans chant “Rusty”. Zayn says his name is not rusty, it’s Sami Zayn the locker room leader. Zayn says what he is about to say is not a threat. But they should think about how they speak about Roman Reigns and the Bloodline.

Zayn says the last person to disrespect Roman was Shinsuke Nakamura and he handled it. Orton says he is not an errand boy for Roman but he is making calls for the Bloodline. Orton says that is pretty cool. He is not just out here running his mouth, he is a vital part of SmackDown. Zayn says he is.

Orton says Zayn is a shot caller. He thinks this is perfect. Orton tells him to make the match. Sami Zayn vs. Riddle and if Riddle wins, they get their unification match for the WWE tag team championship. Orton says Zayn makes the calls. The fans chant “Rusty” as Zayn says the match will happen.

Zayn leaves the ring and says it won’t happen tonight because SmackDown is complicated. He says he has to speak with Paul Heyman and Roman Reigns. Out comes Adam Pearce. He says he cannot agree with him competing on behalf of the Bloodline but everyone would like to see a match between he and Riddle. And the match will happen. And the match is now.

Zayn goes for the Helluva Kick, Riddle with a kick. Riddle climbs the top rope and Zayn pushes him to the outside.

Riddle grabs Zayn and Zayn is on the ring apron. Riddle with the DDT off the second rope. Riddle goes for the RKO but Zayn rolls to the outside of the ring. Riddle grabs Zayn but Zayn pushes him face first into the ring post. Zayn throws Riddle into the timekeeper’s area. Zayn runs into the ring as the referee counts to nine but Riddle gets in the ring. Zayn argues with the referee. Riddle with the Bro Derek. He goes for the cover and gets the pin. 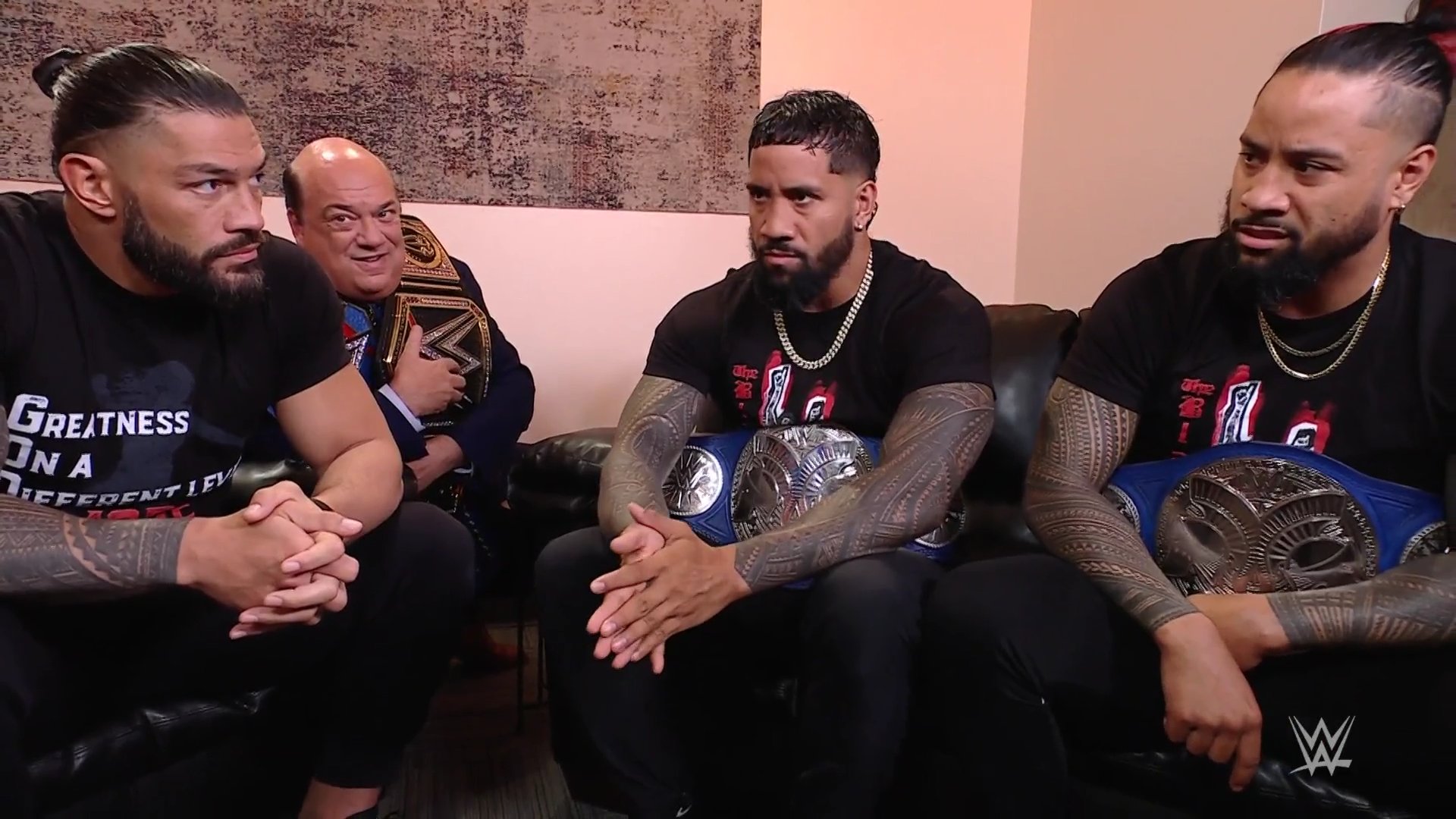 Roman Reigns, The Usos and Paul Heyman are backstage watching the match. Roman asks Heyman why RK-Bro are on his show. The Usos say they are not just disrespecting Roman but themselves too. Jimmy says they do this for the Bloodline and the family. Tonight, the whole world will acknowledge the tribal chief.

Sami Zayn is backstage and Shinsuke Nakamura tells him that Roman is the head of the table. But Zayn is the table’s ass.

Out comes Raquel Rodriguez to the ring. She introduces herself and says she accepts the challenge. She says tonight she will be making history.

Both women are face to face after the match as Ronda extends her arm and they shake hands.

Shotzi is backstage with Adam Pearce. She says she was going to the ring but Raquel pushed her out of the way and took her opportunity. In comes Aliyah who tells Adam that Shotzi locked her in the room.

Kayla is in the ring as she introduces Madcap Moss to the ring. She says last Sunday he had the biggest win of his career.

We see clips of Madcap against Corbin from WrestleMania Backlash. He says this is by far the biggest win of his career. Corbin is powerful and he can really wear you down with his terrible personality. He says if Corbin just stood six feet away and told him another story of how much his watch cost, he would have tapped out from boredom.

Madcap says it was tough but he made it through and he beat the big bald wolf. He says his WWE career is just beginning and he wants to try it all. Form a mix tag team wit hSasha Banks called Madcap Boss. Grab the Money in the Bank ladder. Replace title belts with title suspenders.

Corbin hits Madcap from behind with a chair. Corbin walks to the outside of the ring and grabs the Andre the Giant memorial statue. Corbin places the chair between Madcap’s head. He grabs the statue and slams it onto the chair.

WWE officials run down to the ring as Corbin leaves the ring.

Back from commercial, Madcap is on a stretcher. Corbin asks Madcap what do you call the place where Corbin is sending him and that is the Mosspital.

The bell rings and we are under way. Shayna and Naomi start the match. A back elbow by Naomi as she kicks Shayna away. Sasha is tagged in and they double team Shayna. She goes for the cover but Shayna kicks out. Natalya is tagged in. Natalya with a right hand and she slams Sasha into the corner. She stomps on Sasha.

Natalya places Sasha on the ring apron but Sasha with a right hand. Sasha with a head scissor take down followed by a meteora. She goes for the cover but Natalya kicks out. Sasha rolls Natalya up but Natalya gets out of it and rolls Sasha up but Sasha gets Natalya in the Banks Statement. Natalya makes it to the ropes. Sasha goes for another Banks Statement but Shayna breaks it up.

Drew Gulak is backstage with Ricochet. He tells Ricochet it has been a nightmare the last few weeks. Ricochet says he can relate but had he given up when things were tough, he would not have the Intercontinental title. He took control and if Gulak wants to be the best version of himself, he is the only one that can control that. Gulak says he is right and this version of him is going to put Gunther in his place.

Gulak is walking as he sees Gunther. They are face to face as Gunther pushes Gulak into the door, rips his shirt off and chops him.

The bell rings and we are under way. Kofi with a drop kick. He gets Butch in the corner and right hands by Kofi. He runs towards Butch but Butch with a clothesline. Butch with right hands. An arm bar onto Kofi and he stomps on Kofi’s arm. Butch with a right hand as he runs towards Kofi but Kofi throws him to the outside of the ring. Kofi goes for a baseball slide but Butch moves out of the way. Butch gets back in the ring but a kick by Kofi. He climbs the top rope and a double axe. Butch to the outside o the ring. Kofi on the ring apron and he kicks Butch in the face.

Back from commercial, right handsd by Kofi. A clothesline by Kofi followed by a drop kick. Kofi with the SOS. He goes for the cover but Butch kicks out. Kofi on the ring apron, he jumps off the top rope but Butch with a right hand. He goes for the cover but Kofi kicks out. Butch goes for a kick but Kofi moves out of the way, Butch with a kick to the face. Butch runs towards Kofi but Kofi slams Butch down onto the mat.

Zayn is backstage with Paul Heyman. He asks Heyman if everything is square as he may have overstepped his boundaries when he accepted the match on their behalf. He says he stood up when no one else did. RK-Bro disrespected Roman Reigns, the Bloodline and SmackDown. He is the one who stood up. Heyman tells Zayn that his tribal chief appreciates him.

Reigns says he is untouchable. But this is where things get interesting. The Usos might have someone next because there is a challenge on the table for them. And the question is what are they going to do about it. Roman gives the microphone to Jimmy.

RK-Bro come out to the ring. Orton tells Roman he sees him smiling but he didn’t smash John Cena as Cena is 10 times the superstar Roman will ever be. Riddle says before he sleeps, he likes to turn on the laptop, turns off the lights, he puts on his headphones and he goes back to watch old matches. And last night, he was watching their match from WrestleMania Backlash and he was thinking that they need to make that Unification match happen.

Jimmy tells him they accept. Jey says they accept but not tonight. Next week, they will be the unified Tag Team champions. The Usos say they will have all the titles as Riddle knees Roman in the face. Riddle and Orton leave the ring and celebrate.