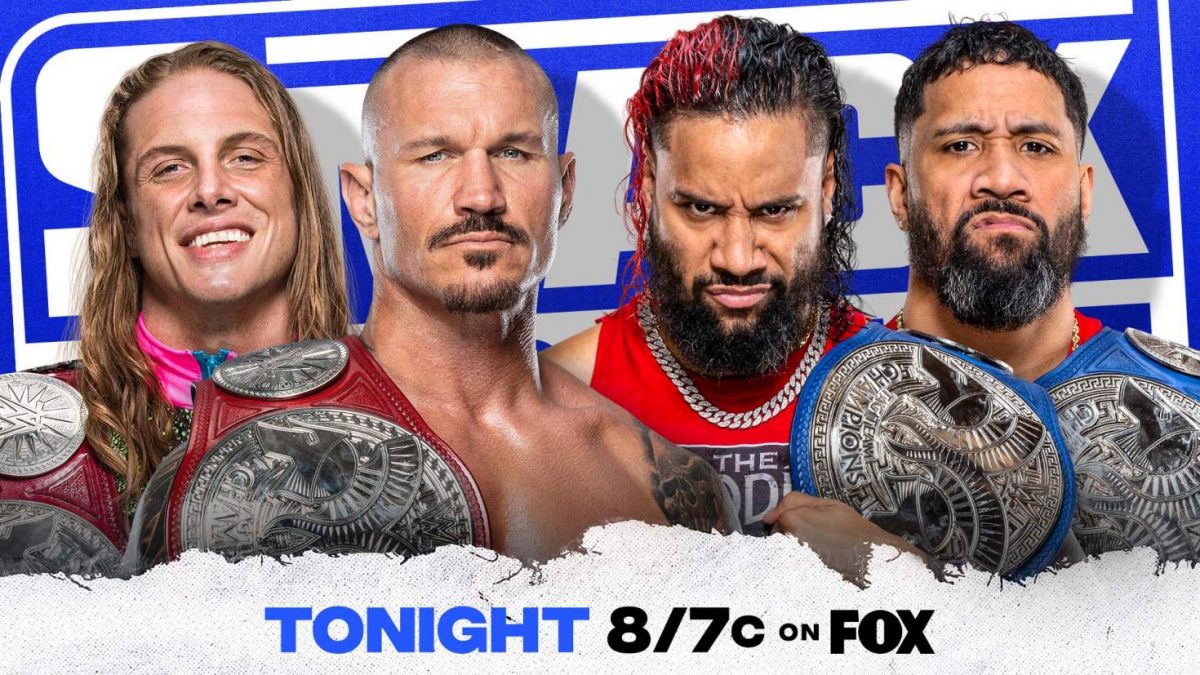 Heyman welcomes everyone to the single biggest night in the history of tag team wrestling. Heyman says on the island of relevancy is the moment of truth. Roman Reigns is the GOAT, undisputed, the greatest of all time. You can take your Bruno, your Hulk Hogan, Steve Austin, Dwayne The Rock Johnson, Brock Lesnar and John Cena. You can stack them all up and that’s what would happen if they all stepped into the ring at the same time. They would be stacked and pinned by the undisputed GOAT, Roman Reigns.

He says it’s the best tag team from SmackDown against the best tag team on Raw. But The Usos have to earn their spot, they have to be relevant, they can’t be yesterday’s news. It’s not enough to be the cousins of the tribal chief. Tonight, the Usos will come home as the undisputed Tag Team champions or they won’t come home to the island of relevancy at all. Heyman says The Usos will beat RK-Bro, they will become the greatest tag team of all time, they will be the undisputed tag team champions. And that’s not just a prediction, that’s a spoiler.

Roman tells The Usos that they know what he wants. And he expects them to deliver. The only reason he has these expectations is because he loves them. All three guys hug.

Happy Corbin is standing outside of the ring with the Andre the Giant Memorial trophy. He says no one understand how good it is to be him. He is tall, handsome, he is wearing a 12,000$ hat and a 70,000$ watch. And he rid the WWE of Madcap Moss. And he has a souvenir to put in his trophy case to go with the one he has.

We see a clip of Corbin attacking Madcap last week. He says he got fined a lot of money for that, well a lot of money to most people. But you can’t put a price on art and that was a work of art. And just like amazing piece of art, you appreciate it more the second time around. They air the clip a second time.

Corbin is in the ring and says everyone should appreciate all the things you have. You should show your boss total respect. You should never try to improve your station in life. Madcap Moss had it good. He was his protege, he flew on private jets and Corbin paid for it all. And now if Madcap wants to eat a steak, his nurse has to chew it for him first.

He wanted to get to the top of WWE. He was a big shot. He didn’t appreciate every great thing that Corbin did for him. He thought he can be the butt of all of his jokes. He called Corbin the big bald wolf. Corbin asks who is laughing now. Maybe he is the big bald wolf because he huffed and he puffed and he put Madcap Moss in an ambulance. Corbin grabs the trophy and throws it into the ring steps, breaking it.

A Boston crab by Gunther and out comes Ricochet. He gets in the ring as Gunther leaves the ring.

We cut backstage and Max Dupri, LA Knight of NXT, enters Adam Pearce’s office. He says he is the CEO of Maximum Male Models and tonight, the discovery begins for superstars that can headline Paris Fashion Week and WrestleMania.

Pearce says it’s the first time he hears of him. Dupri tells him Sonya Deville called him in. Pearce says Sonya was relieved of her duties weeks ago. Dupri says his agency and him have a signed contract. Pearce says he will speak with his lawyers.

RK-Bro are backstage with Kayla. Riddle says he heard the Usos and they are trying to convince themselves that they can beat RK-Bro. He has been beating the Usos one on one every week. He says he is confident because RK-Bro 420 says they just smoked them.

Orton says the Usos ere sweating bullets because tonight after all the smoke clears and the dust settles, Roman will look down at the Usos in shame and disappointment. And they will look up at Roman and tell him they got hit with the three most devastating letters in all of sports entertainment, RK-Bro.

Shotzi is backstage and in comes Aliyah. She tells Shotzi she should have been up against Ronda last week but she got locked in her locker room. In comes Raquel Rodriguez. Shotzi tells her she has all the physical tools but she is weak, soft and too night. She is a disappointment and she will make Rodriguez pay for stealing her moment in their match. Rodriguez tells her “estas muerta”, you are dead.

After commercials, the bell rings and we are under way. Rodriguez lifts Shotzi up with one arm and drops her. Rodriguez with a shoulder block as she slams Shotzi’s arm into the mat. Shotzi gets up and a right hand by Shotzi followed by a kick to the face. Rodriguez lifts Shotzi up and throws her into the corner. A kick by Shotzi as she climbs the second rope. Shotzi gets on Raquel’s shoulders but Rodriguez slams her into the corner. Shotzi with a kick followed by a right hand and a knee to the face but Raquel with a headbutt. Shotzi kicks her away and climbs the second rope. Shotzi jumps off the second rope, Raquel catches her and a fall away slam.

Raquel with another fall away slam.Raquel climbs the second rope and a corkscrew splash onto Shotzi. She lifts Shotzi up and hits her with the Chingona Bomb. She goes for the cover and gets the pin.

Kayla is backstage with Xavier Woods. He tells her he wants to know if Butch will always need Sheamus and Holland in his corner. He says Kofi is not there tonight and he challenges Butch to a match where Butch is alone.

After commercials, the bell rings and we are under way. Woods with a forearm and Butch to the outsie of the ring. Woods with a baseball slide. He grabs Butch and throws him into the ring. Butch stomps on Xavier’s hands as he is getting in the ring. Forearms by Butch as he places his boot on Xavier’s head.

Butch leaves the ring and jumps through the crowd. Woods gets on the stage and celebrates. Sheamus and Ridge stand behind Woods as Woods turns around. Butch attacks Woods from behind as Sheamus and Ridge hold him back.

After commercials, Woods tells Megan that Kofi is back next week and he has someone in mind for a six man tag team match

Michael Cole talks about last Monday on Raw when Sasha Banks and Naomi disappointed millions of WWE fans and their fellow WWE superstars when they left the arena. Because of what they did, they have been suspended indefinitely. And there will be a tournament to determine the new Women’s Tag Team champions.

Paul Heyman is on commentary. The bell rings and we are under way. Riddle and Jimmy are in the ring. Riddle with a leg take down as Jimmy reaches the ropes. Riddle with a take down and Orton is tagged in. They double team Jimmy and a knee to the face by Orton. He stomps on Jimmy’s arm and Riddle is tagged in. Riddle goes for the cover but Jimmy kicks out. A chop to the chest by Riddle in the corner.

Riddle tries to throw Jimmy into the turnbuckle but Jimmy reverses it and Riddle slams into the turnbuckle. Right hands by Jimmy followed by a head lock. He slams Riddle’s head into the mat as the referee stops the match and WWE officials get in the ring.

Roman Reigns with right hands on Riddle after the match. The Usos hit Orton with a double super kick. Roman throws Riddle to the outside. The Usos hit Orton with the steel steps. Roman with the guillotine on Riddle and Riddle is on the announce table. Jey climbs the top rope and he lands the Uso splash onto Riddle through the table. Roman with the guillotine on Orton.

Reigns, The Usos and Paul Heyman pose in the ring with the championships.