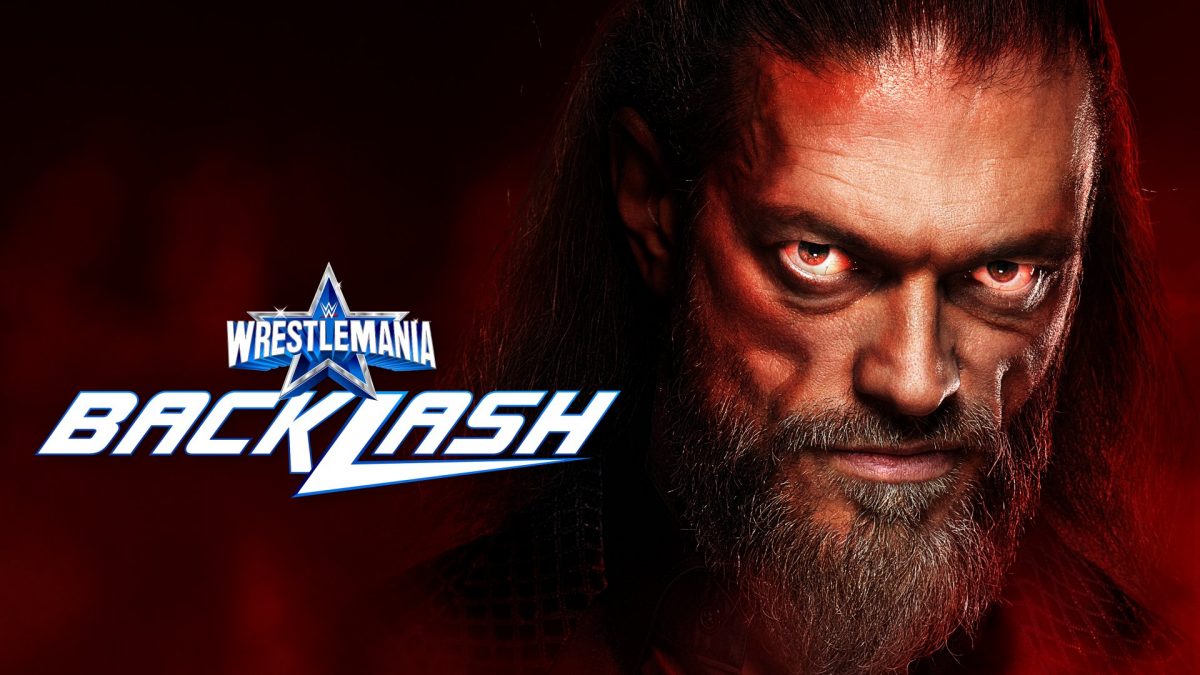 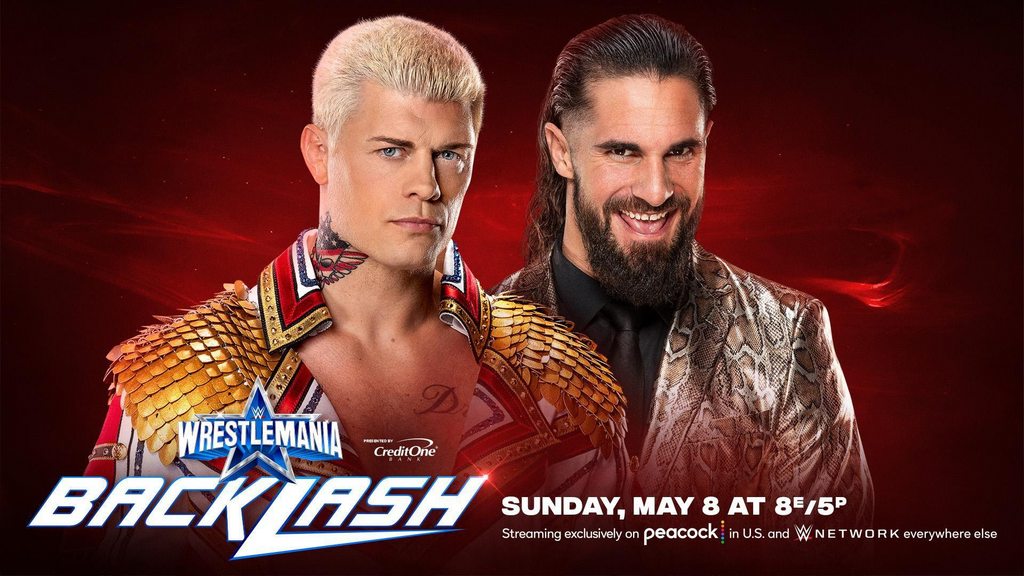 Post-Match: Rollins argues with the ref on the call, telling the ref his tights were pulled. Cody celebrates on the ramp as Rollins is in the ring very upset. 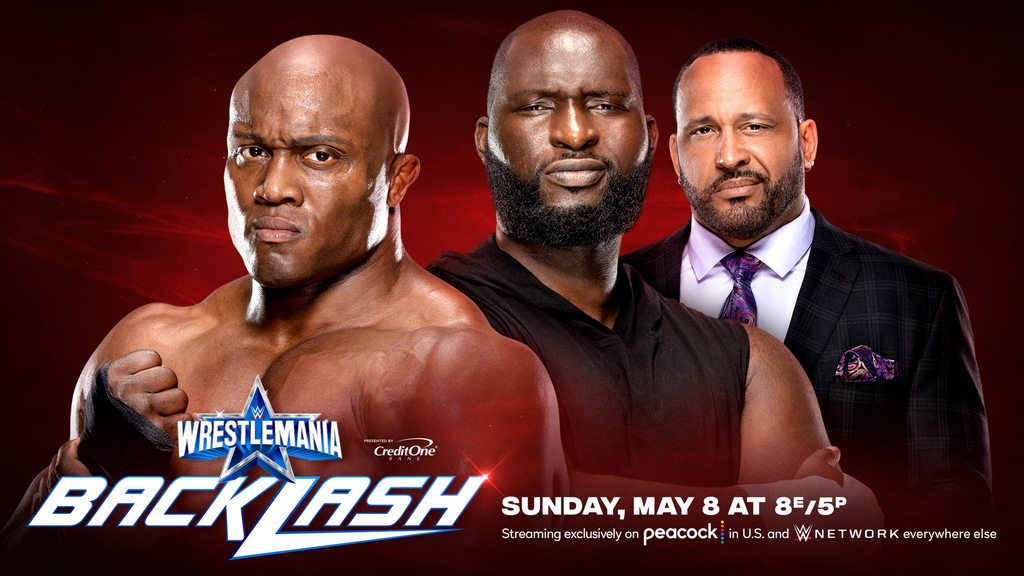 The bell rings and here we go. Lashley attempts hits on Omos, who brushes them off. Lashley comes back with more hits on Omos. MVP distracted Lashley and Omos took advantage of it, but taking Lashley down. Omos is still in control and had a headlock on Lashley. The crowd seems to be taunting MVP. Omos tosses Lashley to the outside. Lashley gets back in the ring as Omos picks up Lashley and tosses his face on the top turnbuckle, and hits Lashley with a big boot to the face. Lashley is down as MVP trash talks Lashley. Lashley attempts a come back as he hops on the back of Omos and puts him in a sleeper. Omos is in the corner and Lashley attempts a come back. Lashley locks Omos in the ropes and drills blows to head of Omos. MVP tries to use his cane to untangle Omos. Lashley goes to the outside and attempts a hurt lock on MVP. Lashley gets back in the ring. and attempts the hurt lock on Omos and has it locked on Omos, who begins to fade, but Omos gets back to his feet and has Lashley in the corner. Omos has Lashley in the corner and hits Lashley with big chops. Lashley is down in the corner. Omos charges at Lashley who counters it with offense. Lashley lifts up Omos and plants him down on the mat. Omos comes back and tosses Lashley shoulder first into the ring post.

MVP pokes Lashley in the eye with cane as the ref is distracted. Omos picks up Lashley, slams him down and get the win. 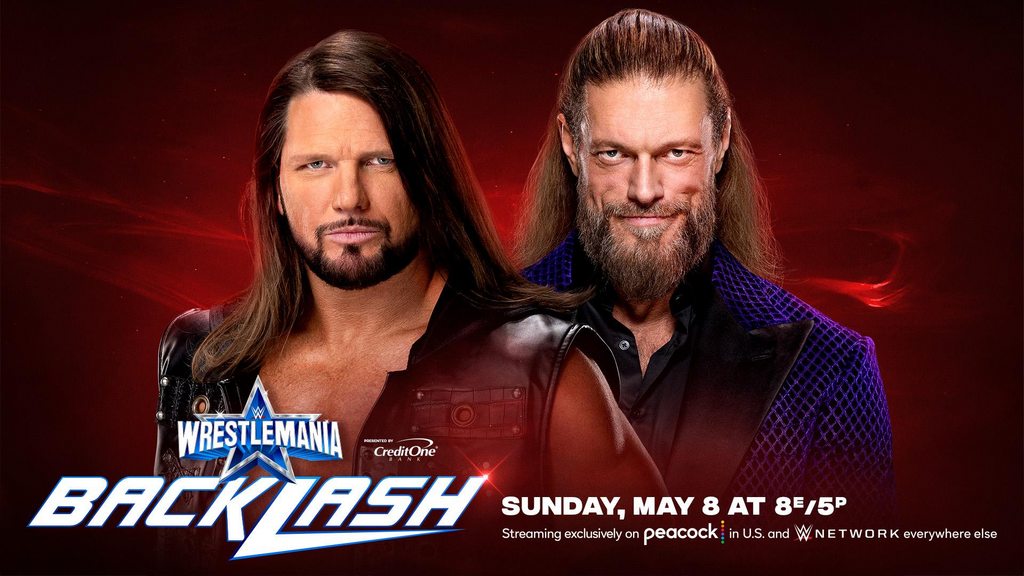 Damian Priest is banned from ringside.

The bell rings and both men lock it up. AJ pushes Edge to corner and hits Edge with a series of headbutts. The action spills to the outside. AJ slams Edge on the announce table. AJ tosses Edge back into the ring and Edge rolls out. AJ comes back with a baseball slide rocket dropkick on Edge. AJ come hits a moonsault onto Edge on the floor. AJ goes for a phenomenal forearm, but Edge kicks AJ in the face. The action is back on the outside. Edge catapults AJ into the ring post. Edge tosses AJ back in the ring and continues the offense on AJ. Edge is working on AJ’s bad shoulder and twists AJ down using the bad shoulder. Edge has AJ in a shoulder lock. The fans are really behind AJ. He attempts to come back, but Edge counters and puts AJ in another shoulder lock. Edge has AJ down in the corner and kicks him. AJ comes back with some offense on Edge and hits him with a Pele kick on Edge. AJ continue with the offense on Edge. AJ continues to favor his left shoulder. AJ slams Edge down, and goes for a pin, but only gets a two count. Edge is on the top rope. AJ climbs the rope and then hits Edge with hurricanrana and goes for the pin, but only gets a two. Edge comes back and works on AJ’s shoulder with a snap on it. Edge reverses it with a calf crusher. Edge is trying to get to the bottom rope. AJ still has it locked, but Edge is able to get to the bottom rope to break the hold. Edge in the corner, grabs the turnbuckle pad off. Both Edge and AJ trade some great near-falls. Edge recovers and attempts a spear, but AJ counters with a step up knee.

As Edge is on the ropes, AJ hits Edge with a Styles clash. He covers Edge, but only gets the two. AJ goes to the top rope. Damian Priest who is barred from ringside, comes out on the entrance ramp. Finn Balor comes out to take out Priest. A mystery person in a hood takes out AJ and Edge has Styles locked in a chin lock. AJ tries to break the hold, but AJ ends up passing out.

Post-Match: The mystery person all dressed in black comes into the ring and takes off the black hood and it is Rhea Ripley to a mixed reaction from the fans. 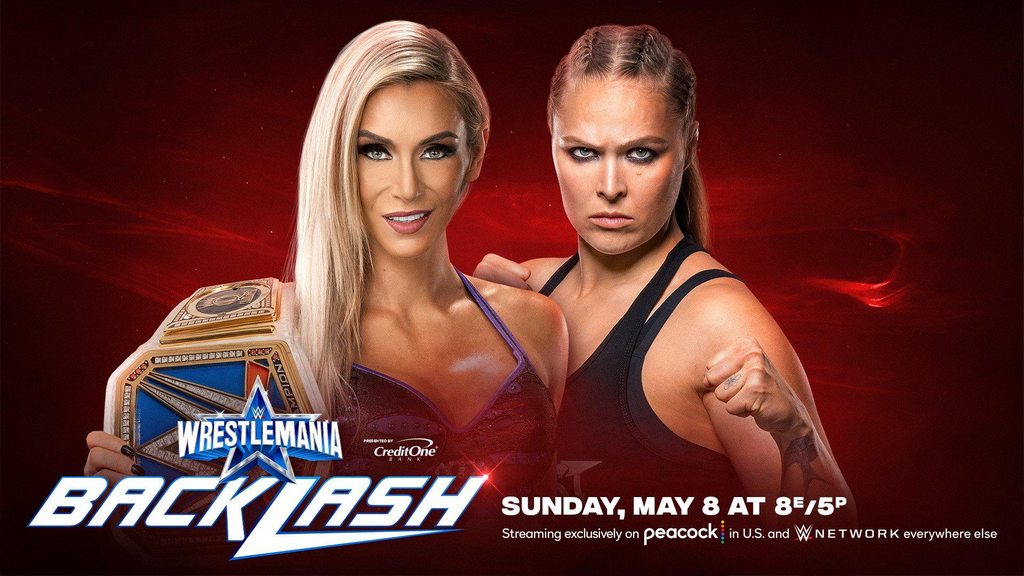 Charlotte is on her feet and sets up the chair. Charlotte says happy mother’s day to Ronda, and then Ronda grabs the chair and wraps Charlotte’s arm in it, and locks in the armbar. Charlotte finally says she quits, and Ronda says to Charlotte, “I was hoping you would say that you b—-“ 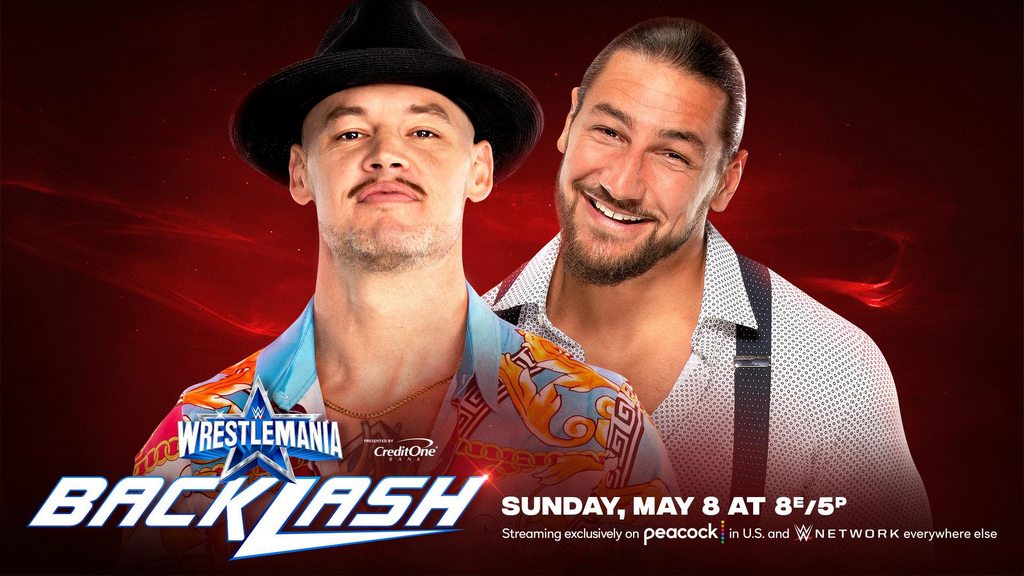 We go to backstage with Kayla Braxton who announces after speaking with medical staff, Charlotte has a broken radius. 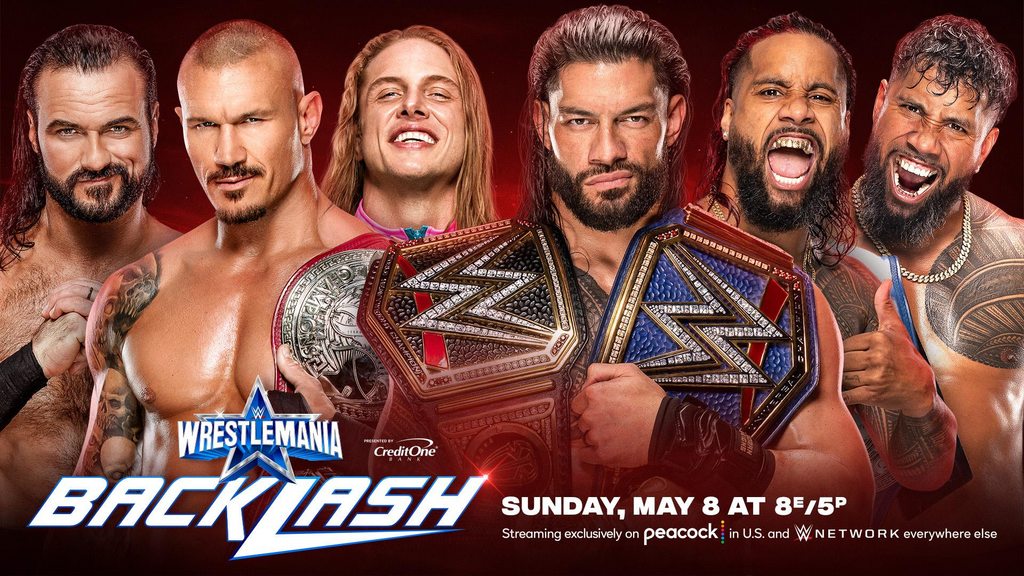 The bell rings and it appears it will be Jimmy Uso and Orton starting the match as the crowd chants Randy. Both men lock up as Jimmy gets Orton into the corner. Orton does a quick tag to Riddle. Jimmy whips Riddle into the corner and hits Riddle with a few blows. Riddle has Jimmy in his corner. He tags in McIntyre. McIntyre in the corner and hits Jimmy with chops. McIntyre stays ahead of Jimmy. McIntyre slams down Jimmy and points to Reigns. Jimmy tags in Reigns as the crowd goes crazy. As Reigns walks around he tags in Jey Uso and the crowd boos like crazy as Reigns trash talks the fans and says he is the head of the table. McIntyre has Jey Uso down and tags in Riddle. The Usos are able to double team Riddle. Jimmy is using the ropes to choke Riddle. As the ref is distracted, Jey hits Riddle with a cheap shot. The Usos continue to double team Riddle as the ref is distracted. Jey has Riddle while Jimmy comes off the top rope onto Riddle. Jey goes for the pin, but only gets a two count. Jey tags in Reigns, who picks up Riddle and has him in the corner and hits him with blows. Riddle attempts to come back, but Roman comes back and hits Riddle with a high elbow. Reigns picks up Riddle and slams him down. Reigns tags in Jimmy who knocks Riddle to the corner. Jimmy picks up Riddle and tosses him into the ring post. Jimmy then kicks Orton to the face and knocks him off the apron. Jimmy charges at Riddle, who comes back with a kick on Jimmy.

Reigns is tagged in as Riddle is able to make it and tag in McIntyre as the Usos are down. Both men are trash talking and exchange blows. Reigns hits McIntyre with a blow to the mid-section. McIntyre comes back and takes out Reigns and The Usos who are come back int the ring. Reigns comes back and hits McIntyre with a superman punch that sends McIntyre to the floor. Reigns goes to the floor and tosses McIntyre back into the ring. Reigns has McIntyre in the corner who hits him with blows. As McIntyre is down, Paul Heyman hands Reigns both titles as Reigns holds them high and flexes with them. As Reigns is distracted by Orton, McIntyre hits Reigns with a Claymore.

Orton is tagged in and takes out both Jimmy and Jey. Its just Jimmy in the ring. Jey attempts to come at Orton who takes out Jey. Orton hits Reigns and both Usos with an RKO. Orton goes for the pin on Jey, but only gets the two count. McIntyre attempts a Claymore on Jey, but is met with a superkick. The Usos then superkick McIntyre. Riddle is on the apron wanting to tag in. Jey is tagged back in. Riddle is tagged in. Riddle is on the offense with a running knee on Jey. Riddle goes to the top rope and hits a flip on to Jey, and then goes for the pin, but only gets the two count. Jey attempts a pin on Riddle but only gets a two count. Jey then hits Riddle with a pop up neck breaker. Outside the ring, Orton is taking out Jimmy. As Orton turns around he is hit with a superman punch by Reigns. McIntyre comes and attempts to slam Jey on the table, but the Usos double team and Reigns slams McIntyre on the table.

Back in the ring it’s Riddle and Jey that exchange kicks. Jey is on the top rope looking for the Uso splash, but Riddle leaps to the top and takes down Jey, but Reigns comes in and spears Riddle and covers Riddle for the win.