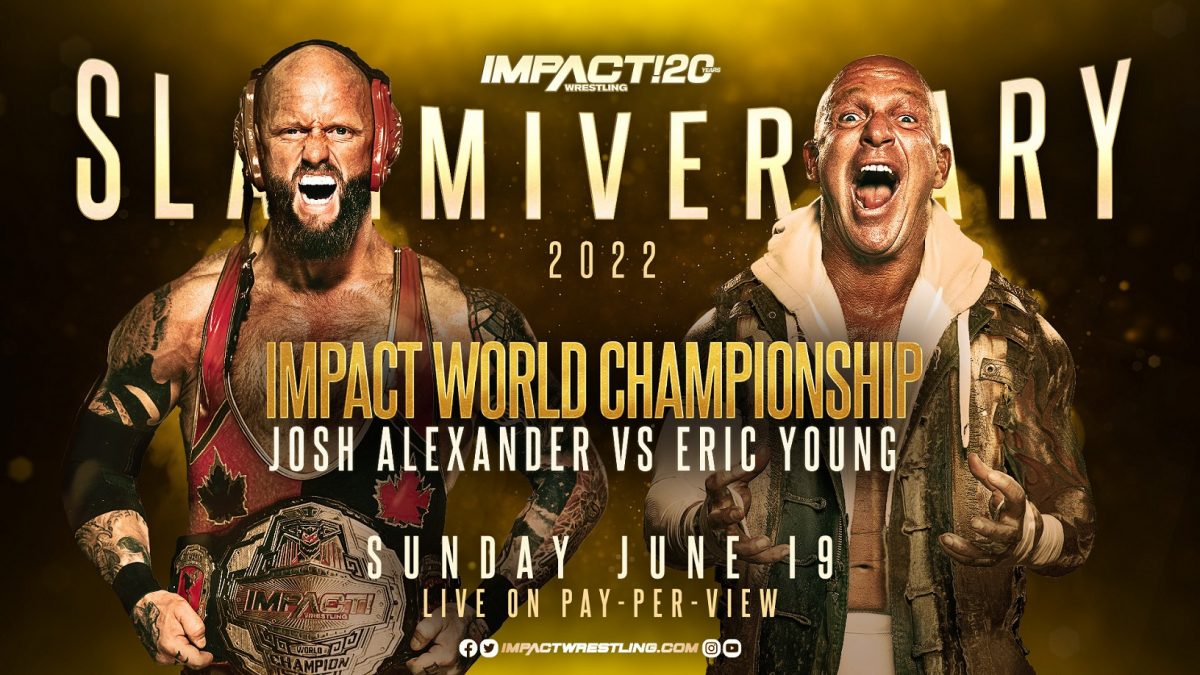 Myers hits a back suplex on the apron to gain the early advantage. Myers wears down Swann with a chin lock. Swann catches him in mid-air with a rolling clothesline to begin building momentum. Swann hits a series of kicks for two. Myers comes back with a spear for a near fall of his own. Myers spikes him with a DDT but it’s not enough to keep Swann down. Swann connects with the 450 Splash to retain the Digital Media Championship and reclaim physical possession of his title!

Johnny Swinger vs. Zicky Dice vs. Chris Bey vs. David Young vs. Shera vs. Raj Singh vs. Bhupinder Gujjar vs. Shark Boy vs. Crazzy Steve vs. Shogun vs. Aiden Prince vs. Nate Webb vs. Mike Jackson vs. Steve Maclin vs. Chase Stevens vs. Slash

Competitors surround the ring as they try to fight their way inside. Chris Bey, Bhupinder Gujjar, Shera, Chase Stevens, Steve Maclin, Johnny Swinger, David Young and Shark Boy are the first eight to do so and will now compete in a traditional battle royal. Bey hits Maclin with the Art of Finesse, eliminating them both from the match. The final two competitors are Shark Boy and Johnny Swinger with the winner now being determined by pinfall or submission. Shark Boy hits the Chummer to win the the match and declare himself the victory of the Reverse Battle Royal!

Ace Austin’s X-Division Title is up for grabs in the high-risk, high-wire spectacle known as Ultimate X! Miguel soars over the top rope, colliding with King on the outside. Austin hits a Fosbury Flop over the top rope to the floor. Everett hits a snap German suplex to Miguel on the apron. Everett takes out everyone with a springboard corkscrew. Bailey hits a modified Ultimo Weapon from the cables. There’s a huge Tower of Doom out of the corner as Miguel is the only one left standing. Miguel spikes Zayne with a super Canadian Destroyer from the top. Bailey and Austin scale the cables and exchange strikes near the title. Everett joins them but Bailey sends him crashing to the mat with a head scissors take-down. Bailey fights off Austin and unhooks the title to become the new X-Division Champion!

Check out what @Sting had to say about @IMPACTWRESTLING celebrating 20 Years!#Slammiversary pic.twitter.com/gA9arhlAso

Scott Hudson returns as he interviews the IMPACT Originals ahead of their ten-man war against Honor No More tonight. The Motor City Machine Guns, Frankie Kazarian and Nick Aldis vow to defend the legacy of IMPACT Wrestling tonight.

“The Icon” Sting remembers his time in IMPACT Wrestling.

Rosemary and Taya Valkyrie reunite to challenge The Influence for the Knockouts World Tag Team Titles! Valkyrie hits a sliding German suplex on Dashwood. Rosemary goes for a spear on Dashwood but Rayne makes the save and drives her into the apron. Rayne and Dashwood trap Rosemary as they cut off the ring and prevent her from making the tag. Rosemary finally creates separation and makes the tag to Valkyrie who hits a thunderous Blue Thunder Bomb on Rayne. Dashwood cuts off Rosemary mid-spear with a running dropkick. Rosemary and Valkyrie hit double spears on The Influence for a pair of two counts. The Influence connect with The Collab on Rosemary but can’t make the follow-up pin attempt. Rosemary is back from the dead as plants Rayne on the mat to win!

Check out what @RealKurtAngle had to say about @IMPACTWRESTLING celebrating 20 years! #Slammiversary pic.twitter.com/PE3Pja9g8T

After being trapped in isolation for 24 hours, Moose and Sami Callihan are unleashed in a match with no disqualifications, no count outs and no shortage of weapons – this is Monster’s Ball! Callihan attacks Moose from behind during his entrance to jumpstart the match. Callihan pummels him with a series of steel tray shots to the head. Callihan is busted open following a shot from a steel trash can lid. Moose hits a Uranage on the hardest part of the ring, then another one through a table. Callihan and Moose take turns hurling chairs at each other’s skulls. Moose attempts a spear but Callihan traps him in a trash can. Callihan pushes Moose off the top rope, sending him crashing into a table at ringside. Callihan introduces thumbtacks into the match but Moose makes him pay with a powerbomb into the tacks. Callihan hits a Death Valley Driver through a door wrapped in barbed wire. Callihan connects with the Cactus Driver 97 for a very close near fall. Callihan powerbombs Moose into a vertical trash can, followed by another Cactus Driver 97 but it’s still not enough to keep Moose down. Callihan assaults him with a barbed wire baseball bat, followed by a third Cactus Driver 97 into the thumbtacks to win!

Two of the greatest tag teams in all of professional wrestling settle the score with the IMPACT World Tag Team Titles on the line! The action is fast and furious as a wild brawl breaks out around ringside. Gallows distracts the referee, allowing Anderson to drive Jay head-first into a steel chair. Jay superkicks Gallows, then makes the tag to Mark. Moments later, The Good Brothers attempt Magic Killer on Mark but Jay breaks it up. Mark and Anderson exchange strikes in the middle of the ring with Anderson gaining the upper-hand following an uppercut. The Briscoes connect with a double team powerbomb on Anderson. Anderson fights off a Doomsday Device. Gallows then tosses Mark off the top rope into a Gun Stun from Anderson. The Good Brothers hit the Magic Killer on Jay to win the match and become the new IMPACT World Tag Team Champions!

James Storm and Chris Harris, otherwise known as America’s Most Wanted, make their shocking return. They share a beer with The Good Brothers and The Briscoes as they cheers to 20 years of IMPACT Wrestling.

Tonight’s event is dedicated to the memory of Bob Ryder.

We honor the voices of TNA Wrestling, Mike Tenay and Don West.

Two voices you could trust, two voices that made every single second they called better with their passion, enthusiasm and knowledge.

On this special night, we pay tribute to our original announce team – the legendary @DonWestDeals and @RealMikeTenay. #Slammiversary pic.twitter.com/NeyVX2T9pq

The IMPACT Originals vow to defend the legacy of IMPACT Wrestling against the threat of Honor No More! The bell rings and the fight is on. Vincent hits Shelley with a Saito suplex, followed by a Flatliner for two. Vincent continues the assault with a side Russian leg sweep to Sabin. Taven hits Just the Tip on Shelley but Kazarian breaks the pin. PCO crashes and burns as Shelley avoids the De-Animator on the apron. Shelley fights out of the corner with a double Sliced Bread to Edwards and Vincent, allowing him to create some much-needed separation. Shelley makes the tag to Kazarian who hits Vincent with a slingshot cutter. It’s total nonstop action as both teams exchange offense at a blistering pace. Sabin dives through the ropes, colliding with Bennett on the outside. Taven is next to fly as he soars over the top into everyone on the floor. Back in the ring, Richards and Edwards square off. Richards locks in a double leglock on both Edwards and Taven. Vincent hits Red Rum on Aldis but Sabin makes the save just in time. Traci Brooks jumps the guardrail and neutralizes Maria at ringside. Kenny King gets involved but D’Lo Brown hits the ring and takes him out with a Sky High. Sabin connects with the Cradle Shock on PCO as Earl Hebner makes the three count, awarding the victory to the IMPACT Originals!

Mickie James is the Special Guest Enforcer for the first-ever Queen of the Mountain match where, after becoming eligible via pinfall or submission, you win the match by climbing a ladder and hanging the Knockouts World Title high above the ring! Whoever is pinned or submitted during the duration of the match must enter the penalty box for two minutes. Green hits a top rope crossbody into everyone on the floor, then pins Steelz to become eligible. Steelz refuses to enter the penalty box but James tosses both her and Evans inside as the two-minute countdown begins. Steels is released from the box as she hits Yim with a springboard bulldog. Evans tries to get involved but James tosses her from ringside. Yim connects with a bridged German suplex on Green, then pins her to become eligible. Yim climbs the ladder with the Knockouts World Title in hand but Steelz takes her out with a cutter. Purrazzo locks in the Fujiwara Armbar on Steelz, forcing her to submit in order to become eligible. Yim soars off the top of the penalty box, dropkicking Green into a steel ladder. Yim hits Grace with a Package Piledrier on the floor to score a pinfall and send her to the penalty box. Green attempts to hang the title but James pulls her off the ladder as payback for attacking her earlier. Green and Purrazzo are perched on the ladder but Yim tips it over, sending them both crashing through two tables on the floor. Steelz and Grace score a double pinfall on Yim, making them both eligible. Grace pins Steelz following a Grace Driver to send her to the penalty box. Grace hangs the Knockouts World Title to win the match and become the new Knockouts World Champion!

IMPACT Wrestling presents its biggest event of the year, Bound For Glory, LIVE this October on pay-per-view.

It’s main event time at Slammiversary as Josh Alexander defends the IMPACT World Title against IMPACT original Eric Young! Both competitors avoid each other’s Moonsaults as we reach a stalemate in the early going. Deaner sets up a table at ringside. Meanwhile, Young drives his elbow into the chest of Alexander form the top rope. Alexander hits a powerbomb, then floats over into a submission. Alexander brings the fight to the other members of Violent By Design, then connects with a top rope crossbody for two. Young counters the C4 Spike into the Stroke, a la Jeff Jarrett. The trip down memory lane continues as he hits a Black Hole Slam for two. Alexander connects with the Best Moonsault Ever for another near fall. Alexander almost puts Young away with the Styles Clash but when Young kicks out, Alexander floats over into the Ankle Lock. Young is tapping out but the referee is blinded after Deaner throws powder in his eyes. Alexander sends Doering through a table with an Olympic Slam. Young shatters a guitar over Alexander’s head. Young spikes him with a Piledriver on the exposed wood but somehow Alexander kicks out at two. Alexander connects with a C4 Spike to score the pinfall and retain the IMPACT World Title!

After the match, Josh Alexander celebrates his hard-fought victory as Tom Hannifan calls him “the future of IMPACT Wrestling”. Slammiversary 2022 goes off the air.