Jon Moxley Opens Up on His Rehab Treatment for Alcoholism Issues 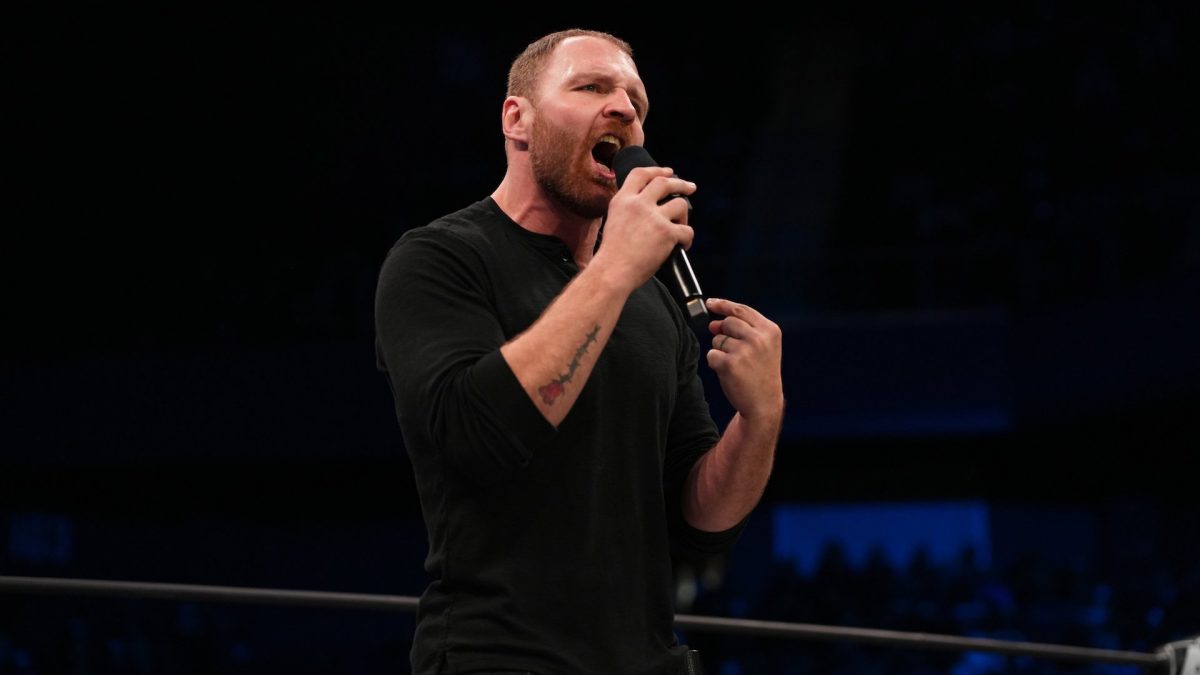 A recent episode of The Sessions with Renee Paquette podcast had Jon Moxley as the guest. One of the topics discussed included Moxley’s thoughts about his decision to enter rehab treatment for his alcoholism issues this past November.

“Night sweats, crazy night sweats, crazy nightmares, my chemicals were all imbalanced, whacky mood swings. When I say it hasn’t been easy, the not drinking part is easy, it’s not like I have some desire to drink or no desire to drink, I can’t even imagine drinking right now. The not drinking is easy. I wanted to stop drinking for a long time, I was trying to quit drinking for a long time, just dealing with all the after-effects of what happens physically when your body goes through this crazy metamorphosis trying to recalibrate itself has not been easy, and I’m on national television while going through these problems, so it’s in front of everybody. A lot of people in my position would have stayed in rehab a lot longer, stayed in hiding a lot longer, I was done three months later, the one therapist I had straight up told me to retire. ‘Start a wrestling school, train some kids, you know what the problem is, you gotta get out of there.’ ‘I don’t think it’s that.’ I went in on Halloween night and was back on TV in January. It makes me a little self-conscious, everyone staring at me. Also, I kind of don’t give a fuck. The other big part of going to rehab was the relief of it. Now there is nothing to hide. I didn’t know how people’s reactions were going to be. When you first go into rehab, they take your phone. After however long of good behavior, they’ll eventually give it back to you. One day, they called me to the front and said, ‘You can have your phone back.’ I was feeling really good about everything, so happy not having a phone. I made a weird face and she’s like, ‘You don’t have to take it, we can keep it here and locked up.’ ‘You just keep it,’ and I went back the rest of the time. Even when I left and went home — when I went into rehab, I lived in Vegas, when I got out, I didn’t live in Vegas anymore. I went straight to the airport. Even when I got out, I didn’t turn on my phone and I didn’t turn it on the whole time. I realized how great it feels. The air is sweeter, sounds and sights are better. You don’t have a TV. It’s just a room with a bed, a chair, a bathroom. No radio, computer, phone, nothing. A little library to read books and that’s about it. Your sleep is all messed up, it’s really hard to come by there. You’re up at 7 to start all your activities and they come bursting into your room every hour to make sure you’re not dead. It’s a lot of sitting there, staring at the ceiling and wall, but it was great. Being disconnected eventually felt so great, very quickly. I didn’t want to go back (to being connected). I highly recommend it. People couldn’t fathom not being tied to their phone. You can do it.”

Moxley also stated that his decision was not based on a single incident and instead was something that had been building up for years.

“Nothing bad happened. I didn’t go to jail or anything. I just couldn’t stop. I was trying for the longest time, which sounds stupid, if you don’t know, you just stop drinking. I didn’t really know, until I started dealing with this, but if you’ve never had to look into it, you might not know, but if you just stop drinking, if you drink a lot, you can die. I always drank. Drank beer all night, back in the day, sleep two hours, go out, wrestle 25 minutes. After shows, get fucked up, wake up the next morning and sweat it out. Never had any problems. At some point, it was the first time I tried to stop and I was experiencing for the first time, at least that I remember, alcohol withdrawal, which is as bad as withdrawal from just about anything. It’s dangerous, and a lot more dangerous in a lot of ways. First thing they told me was, ‘Just quitting drinking, cold turkey at a certain threshold, which I was at, it’s the worst thing you can do. It’s the most dangerous thing you can do. You can go into cardiac arrest and die.’ What’s really common is you can have seizures. Something really bad can happen from that, that’s what happened to Cass [W Morrissey], I was terrified of that for the longest time. The feeling of it is crushing, physical, and anxiety. Not anxiety like you’re nervous about something, the physical feeling of anxiety. Your breathing is messed up, you’re twitchy. They call it the shakes because you’re literally shaking. There were times when I would be at TV and I feel like, ‘People are going to think that I’m on drugs’ because I’m sober. I’d be talking to people and I’d have a little shot or flex just to mellow out because I’d be like, ‘People are going to think I’m on crack right now.’ I was leveling myself out for the longest time. That gets really tiring. Every match, especially at TV, were the longest days because I would be having this horrible alcohol withdrawal at TV, I was terrified I was going to have a seizure on live TV or on a plane and the plane would have to land. To avoid that happening on a plane, I would never be at an airport and on a plane without being nicely buzzed. If I didn’t have time to hit the bar before I got on the plane or it’s morning and the bar is closed, I’d be sitting on the plane like, ‘Come on with the cart. Come on with the drinks.’ I was really scared of something catastrophic like that happening. I was so exhausted with it because everything has to revolve around staying level. I couldn’t enjoy wrestling because I was so worried about that. You can’t go on TV and wrestle fucked up, so I was worried, going through withdrawal. As soon as it got done, it was this big wave of relief, ‘Got through another day, another TV, didn’t have a seizure and die on live TV. Sweet.’ Immediately start getting loaded because it’s been however long. Then you just end up drunk again. It’s this never-ending cycle of hell. There were months of absolute hell. It wasn’t ‘I’m all stressed out and have problems.’ It wasn’t ‘I need to go to rehab and talk about my feelings.’ It was ‘I’m going to die.’ It can happen to anybody. I don’t know what the threshold is, but once you start feeling those withdrawal symptoms, be it alcohol or pills or whatever, that’s when you’re in trouble. Doing whatever you’re doing to normalize yourself, it’s a bad slope.”

Moxley also stated that he had tried to quit alcohol prior to the birth of his first child but it ended up being a lot harder to do than he had thought.

“The whole time, it was getting bad and I’m trying to get level. We just had a baby and that’s when I tried to stop, before she even came, and that made it worse. You can’t be drunk when you’re holding a baby. It was obvious before the baby even got here that I was like, ‘You have to fucking stop drinking.’ It was a lot harder to do than I thought it would be.”

Moxley also gave more details regarding when he finally made the decision to enter an alcohol rehab treatment program and keeping it a secret for as long as he did.

“I didn’t tell anybody. It all happened in like 15 minutes. I could feel the world closing in on me and I think I knew subconsciously that it was coming. I had this one Indie show for Sami (Callihan) for Wrestling Revolver. That was the last show I did. Got through that last Indie show and I could feel the world closing in because people were texting me. Eddie (Kingston) texted me, ‘You alright?’ ‘Yeah, why?’ I knew you were talking to people. I was starting to feel like people were noticing, whether they were or not. I knew you were. I was in Des Moines, a Southwest flight, they don’t serve booze on Southwest flights for some reason. I knew that so I was like, ‘I’m getting loaded before I get on this plane, three hour flight.’ Loaded when I landed, came home, I feel like you were already mad at me, I don’t know, I could feel the entire world closing in on me and I was like, ‘I cannot go another day like this. I can’t go one more day.’ It happened in like minutes. ‘I wanna go.’ ‘Okay.’ Called the place, it was Halloween night, I didn’t tell anybody else. I was standing outside, on the phone with them, giving them my information, kids are walking up to me while I’m on the phone with rehab and they are like ‘Trick or Treat.’ ‘Give me one second, I have to pop a Snickers bar in here.’ Called an Uber, it [rehab] was maybe 10-15 minutes away, an hour after I walked in the door (at home), I was walking into rehab. It was over. I was probably in some type of stupor for a minute.”

Moxley also gave his thoughts about not knowing what the general reaction was to his decision until his first call to his wife Renee while in rehab.

“I felt really defeated for the first day. Then I got on the payphone thing with you and I was like, ‘What’s the deal?’ ‘I talked to Tony Khan and Megha (Parekh), everything is cool. They just want to know how you want to broach the subject’ because I was advertised for a match. ‘Do you want to tell people?’ It was up to me. I was like, ‘Uhh, I guess,’ I’m not going to lie. The next day I talked to you on the phone and it was, ‘Yeah, everyone knows.’ ‘Oh, okay.’ I don’t have a phone, so I don’t know what the reaction is, but I knew it was out there. It was like a weight was lifted off my shoulder. It’s this thing I was hiding from people for so long. once it was ‘everyone knows, fuck em, I don’t care.’ They can call me whatever names they want, I don’t give a shit. I’m doing whatever I have to do for myself, fuck em. Credit to them, AEW and Tony, they were totally cool. He said, ‘If you never came back, that would have been cool.’ They didn’t bug me. When I came back it was just, ‘Well, I guess I should probably come back now.'”