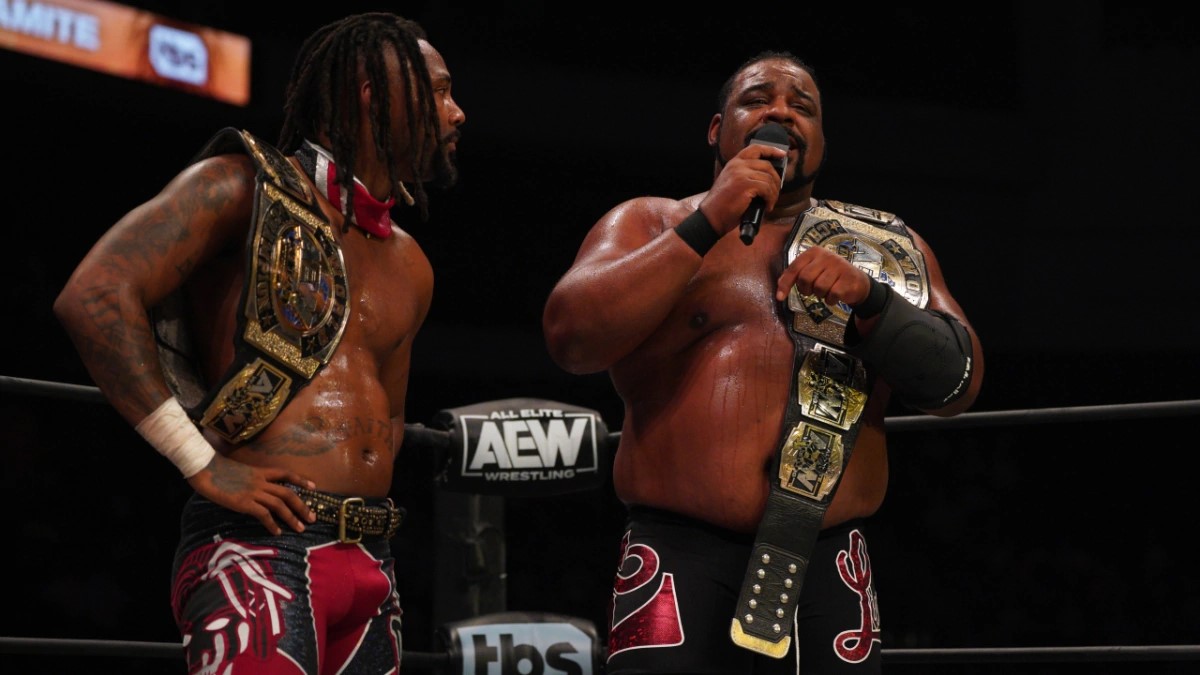 Bryan Alvarez reported that his sources stated that Jackson suffered the injury a few minutes into the AEW World Tag Team Championship Triple or Nothing match during Wednesday’s AEW Dynamite Fyter Fest Week 1 show. Alvarez reported that Jackson suffered the injury after he landed awkardly from a double team suplex spot by Keith Lee and Powerhouse Hobbs.

Alvarez reported that Jackson was extra careful with his bumping for the rest of the match to not aggravate his injury.

“About, I don’t know, three, four, five minutes into the match, Matt Jackson gets a stinger.

This is one of those things where people talk about toning down because there are so many injuries, but dude, I’m telling you 80% of these injuries are on things that nobody should ever get hurt doing and what he got hurt on was Keith Lee and Hobbs giving him a basic vertical suplex and just when he fell… you could see it immediately. He hit ass first and then his head snapped back and he grabbed his neck.

Following the show, Lee gave an emotional speech to the crowd reflecting on him and Strickland winning the AEW Tag Team titles. Lee also revealed that he had dedicated the match to a close friend of his who is currently dealing with stage four colon cancer.

“I thank you all so very much. Swerve, I thank you from the bottom of my heart. I’m not gonna take up a bunch of time, I know y’all are waiting on Rampage, but I have to to about this. I only have three people in my world that I consider to be extremely close to me. One of them, I’ve known for about two-and-half decades. I know what y’all are thinking; goddamn, Keith, you old as s—- ain’t you? I’m 37, but as you can tell, I’m young in the legs, baby. But listen, my friend, his name is Lucilius King. I’ve known him since 1998. I found out a little while ago that he may have cancer. As most of you know, last year, I nearly died. I didn’t say a word until the threat was gone and passed. There isn’t much you can do to me to rattle me against me. But when it comes to the people I love, I found out two days ago, stage 4 colon cancer. And I dedicated this match to him and another buddy of mine named JD Griffey. The fact is, I didn’t care if we won or lost. The fact is this is a brotherhood, and I’m devoting my everything to that. So Lucilius King, this is more than just a victory for me, this is more than just a victory for our story. This, sir, is a victory for you and a statement of my goddamned love. I will always be there. Always. And when I get to Texas, I swear to god, I gonna get in my car, drive my ass to Austin, Texas. And I will see you as soon as I can, my friend. Stay strong, fight like we’ve done. Fight harder than we have. Fighter harder than I did to live. And I’ll be there soon, my friend. I love you.”

Claudio Castagnoli on His WWE Departure & Signing with AEW

Sports Illustrated held a recent interview with Claudio Castagnoli. One of the topics discussed included Castagnoli’s thoughts on his departure from WWE earlier this year.

“It can be hard to take the high road, but that’s the road I am going to take. All the memories, they matter. I’m grateful for everything I have accomplished and I’m grateful for all those opportunities. And they make me work so much harder to get where I want to be. Once I left, I knew what I wanted and where I wanted to go, I just didn’t know if it would happen. That was also time for me to take a break mentally, recharge, and come back better. My goal is always to be better than I was yesterday, to be better tomorrow than I am today. I want to be even better now than people remember.”

Castagnoli also gave his thoughts about his decision to sign with AEW.

“I came to AEW for new challenges. That’s why I fit perfectly in the Blackpool Combat Club. Like [William] Regal said, ‘You either step up or get stepped on.’ I loved coming in with the BCC because I’ve known those guys for such a long time, and I know they have my back no matter what. It feels like everything here is clicking in AEW. It doesn’t feel like it’s only been a couple weeks. I’m extremely excited to find out what the future holds.”