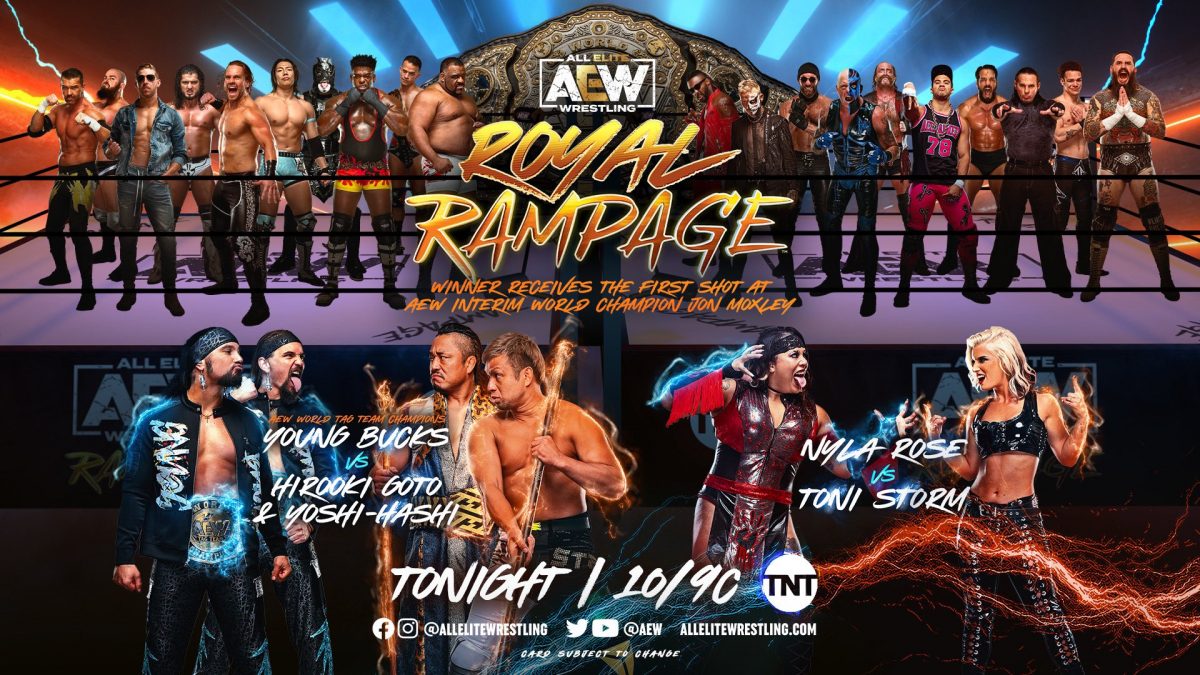 The commentators remind us that the man who emerges victorious in this 20-man battle royal will move on to become the first title challenger to Interim AEW Champion Jon Moxley.

The countdown clock appears and out comes Ricky Starks to the red ring. Nese gets eliminated. Allin hits a tope suicida through the ropes, but doesn’t go over the top so he’s still in it.

The Butcher is out for the next blue ring entrant after the next countdown clock. He picks up Darby in the powerbomb position on the floor before getting into the ring to officially enter the match. He rag-dolls Darby into the barricade over-and-over again.

John Silver is in the red ring as the next entrant to join the match. He and “Hangman” Adam Page beat down everyone in their respective ring and then acknowledge each other with mutual respect / friendship. The fans pop.

Max Caster is making his way out now, freestyle rapping his way to the ring with Rudy Guilioni disses, references to getting hugs from Tony Khan and a mention of how Detroit loves The Acclaimed.

Next out is The Blade, who does the same thing his tag-team partner The Butcher did during his entrance — attack Darby Allin at ringside before stepping through the ring ropes to officially enter the match.

Penta El Zero Miedo, Shane “Swerve” Strickland, Matt Hardy and Keith Lee have entered the match. Max Caster is the latest to be eliminated, as is John Silver. We head to a mid-match commercial break as the Royal Rampage match continues.

We’re back from the break and we see Hardy get eliminated. Frankie Kazarian makes his way out to join the match. Dante Martin and Dustin Rhodes have also entered the mix.

When the countdown clock appears again, Brody King of The House of Black makes his way out and heads down to the ring. The commentators all like the chances of the fresh, big man from the aforementioned faction.

King makes an immediate impact upon entering the ring. He is rag-dolling bodies all over the place. We see The Butcher & The Blade double-teaming some guys. The countdown clock appears and when it expires, Orange Cassidy makes his way out.

The “Freshly Squeezed” one gets a good pop from the Detroit fans and enters the ring as cool as a cucumber, as usual. He doesn’t last long, however, as he takes his attention off of Shane “Swerve” Strickland, who takes that opportunity to throw him over-the-top and out to the floor for another elimination on his growing list.

Keith Lee, Orange Cassidy, Shane “Swerve” Strickland, Ricky Starks, The Blade and The Butcher are the latest entrants to get eliminated over the last couple of minutes.

We’re down to only “Hangman” Adam Page, Brody King and Darby Allin as the only remaining entrants left in this match. We see Page get eliminated.

King grabs Darby from behind in a choke and lifts him off his feet while maintaining the choke. He dangles a lifeless Darby over the ring ropes and the charismatic babyface ends up crashing and burning on the floor at ringside when King eventually releases the choke.

This means Allin is eliminated. We have our winner, folks, and his name is Brody King. The House of Black member will now move on to challenge Jon Moxley for the Interim AEW Championship. After the match, we head to another commercial break.

Watch out for @730hook, @alexmarvez! This Cold-Hearted, Handsome Devil just dropped some wisdom!

Tune in NOW to #AEWRampage on TNT! pic.twitter.com/TLeAC7BOPX

Alex Marvez tries to interview Hook, but he just eats potato chips. Marvez says that he’s seen Hook’s past interviews and they all seem to go this way and he’s starting to think he’s a “go with the flow kind of guy.” Hook grabs Marvez by the tie and says “That’s the problem Alex. Most people don’t think. Anything essential is invisible to the eyes.”

Remember, with a potential victory in this match, Hiroki Goto and Yoshi-Hashi will earn themselves another match against The Young Bucks — with the AEW Tag-Team Championships on-the-line.

We see some solid back-and-forth action in the early going, and then the NJPW team start to pull ahead and settle into the offensive lead. The commentators sing their praises, with Excalibur referring to Goto as one of the most-improved talents in NJPW over the past couple of years.

Just as The Young Bucks start to fire up and shift the offensive momentum into their favor, we head to a mid-match commercial break as the action continues.

As we settle back in from the break, we see The Young Bucks are struggling to maintain their offensive lead, as Goto and Yoshi-Hashi are starting to fight back into competitive form.

Before the NJPW duo can regain the offensive lead in this tag-team title eliminator bout, Nick and Matt Jackson hit a BTE Trigger. They follow that up with a Meltzer Driver, springboarding from one ring to the other, for the pin fall victory.

A man of his word! The unlikely pairing of ROH World Champion @TheJonGresham and @theleemoriarty team up to take on two of @TullyBFTR‘s best clients next FRIDAY on #AEWRampage!

Tune in to #AEW Rampage NOW on TNT! pic.twitter.com/eZTycYaF4E

We shoot backstage for the regular, weekly pre-main event interview hosted by Mark Henry. “The World’s Strongest Man” sets the tone and then we hear from both competitors scheduled for tonight’s women’s singles match headliner. Nyla Rose talks about how all roads to the AEW Women’s Championship lead through her. Toni Storm talks about her mission to capture said-title, and makes it clear she has no problems going through Rose to get one-step closer to exactly that. From there, Mark Henry has declared that — you guessed it — it has been enough talk, and that it is, in fact, time for tonight’s main event!

We head back inside Little Caesers Arena where the commentators set the stage for our final match of the evening. The bell sounds and we’re off-and-running with this one. We see Marina Shafir at ringside in Nyla’s corner. She gets involved early into the contest, helping Rose establish the early offensive lead.

Finally, Storm starts to show signs of life. She hits a double DDT on both Rose and Shafir. This buys her some time to recover and now she appears fired up and ready to give Rose back all the punishment she inflicted on Storm — with occasional help from Shafir.

Storm hits a cutter on Rose while standing outside the ring ropes on the ring apron. She quickly re-enters the ring and somehow connects with a German suplex on the much larger Rose. She immediately goes for the cover, however Rose kicks out after the count of two.

We see Marina Shafir once again get involved in this match, as she jumps up on the ring apron to distract the referee. Storm brings her into the ring the hard way and then hits a pendulum DDT on Rose. She follows up with a pin fall attempt, and this time she gets the three-count and picks up the victory here on this week’s AEW Rampage main event.

Once the match wraps up, we see Rose and Shafir immediately jump Storm from behind for a post-match, two-on-one sneak attack.

This leads to Thunder Rosa sprinting down to the ring from the backstage area to make the save. Rosa and Storm beat down Rose and Shafir and clear the ring of the heel duo. They turn their attention to each other as the commentators talk about them being opponents at The Forbidden Door less than a week ago. They speculate that they haven’t seen the last of each other inside the AEW ring. The two shake hands and play to the crowd as this week’s show goes off the air.