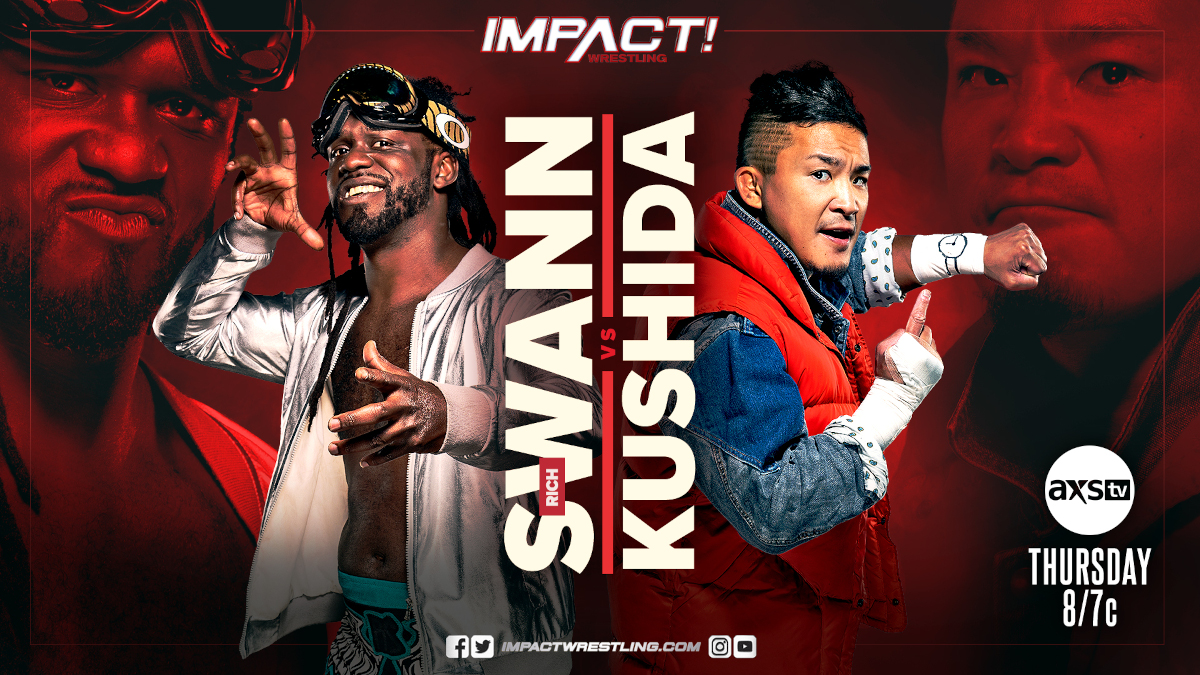 The war between Honor No More and Bullet Club rages on as Eddie Edwards takes on Ace Austin in tonight’s opening contest! King provides a distraction on the outside, allowing Edwards to gain the early advantage. Edwards hits a belly-to-belly suplex off the ropes for two. Austin quickens the pace and sends Edwards to the floor. Austin soars through the air with a Fosbury Flop. He follows up with a springboard leg drop for two. Edwards returns fire and hits a Backpack Stunner. King and Bey are ejected from ringside, prompting Bey to take out King with a dive over the top. Back in the ring, Austin almost puts Edwards away with his signature springboard kick. Edwards comes back with a Tiger Driver, followed by the Diehard Driver to win.

After multiple "WAKE UP CALLS" to Honor No More from @HEATHXXII, @MeanGiaMiller caught up with him on #IMPACTonAXSTV! pic.twitter.com/RcAFXNtWog

Heath is on a mission to take out every member of Honor No More with a Wake Up Call.

During an interview with Gia Miller, IMPACT World Champion Josh Alexander is interrupted by his next challenger at Emergence, Alex Shelley. Shelley says that he wants Alexander to come out of tonight’s match with Shera unscathed because he wants him to be at his best at Emergence.

Laredo Kid and Trey Miguel join forces against duo from Swinger’s Dungeon, Johnny Swinger and Zicky Dice! Kid and Miguel quickly gain control as Dice retreats the outside. Swinger and Dice attempt to play mind games as they don their own masks. Miguel dives through the ropes, taking out Dice on the floor. Swinger provides a distraction, allowing Dice to blindside Miguel with a clothesline. Swinger inadvertently hits partner with a top rope elbow drop. Miguel hits Dice with the Meteora, followed by the Frog Splash from Kid to win!

.@Myers_Wrestling is STILL doing everything he can to duck @bhupindergujj4r.. but he can't duck @Taurusoriginal NEXT WEEK on #IMPACTonAXSTV! #IMPACTWRESTLING pic.twitter.com/Tuj4Oaa8x7

Brian Myers continues to make Bhupinder Gujjar jump through hoops for a Digital Media Title opportunity. Despite Gujjar’s win over Vincent earlier tonight on BTI, Myers tells him that his spot has been taken by Black Taurus next week.

.@tiffanynieves_ was in the wrong place at the wrong time! @Kelly_WP has arrived in @IMPACTWRESTLING and is ready to take out anyone in her path! #IMPACTonAXSTV pic.twitter.com/ooVtPvRIHL

Tasha Steelz joins Tom Hannifan and Matthew Rehwoldt on commentary for the following showcase match between talents from Ohio Valley Wrestling. Steelz says the winner may receive a match with her in the future. Stone crashes and burns on a springboard Moonsault attempt, allowing Nieves to capitalize with a DDT. Nieves stacks her up with a hold of the ropes to win.

After the match, Killer Kelly makes her long-awaited arrival in IMPACT Wrestling and goes face to face with Nieves! Kelly chokes her out before dropping Stone with a modified Implant Buster in the middle of the ring.

Eric Young gives Deaner and Joe Doering their orders – take out the Motor City Machine Guns, then do the same to KUSHIDA.

After a physical altercation last week, Josh Alexander collides with Shera in what promises to be a hard-hitting contest! Alexander hits a running crossbody to the back of Shera. Singh pulls Alexander off the apron but fails his attempt to push him into the steel steps. Alexander locks in the Ankle Lock, forcing Shera to tap out!

In an interview with Gia Miller, Moose denies the allegations that he and Steve Maclin have formed an alliance.

Honor No More confronts IMPACT Executive Vice President Scott D’Amore about Heath’s recent string of attacks on the group. D’Amore doesn’t offer them any support and tells Edwards that being a leader comes with a lot of problems. Heath strikes again in the background.

Havok’s alter ego, Jessicka, wants to party with VXT at Chelsea Green’s bachelorette party. Rosemary and Taya Valkyrie pull her away as they have a Knockouts World Tag Team Title defense against VXT at Emergence.

.@TrueRajSingh refused to leave the ring! Don't worry @TheSamiCallihan made him! #IMPACTonAXSTV pic.twitter.com/im8ZlyjUOm

Back in the IMPACT Zone, Raj Singh is furious as Shera is still laid out after his match against Josh Alexander. Singh says that Alexander should have been disqualified and that he’s not leaving the ring until there is justice. The lights go out and Sami Callihan spikes him with the Cactus Driver 97! Callihan gets on the mic and says that he doesn’t care if Moose and Steve Maclin are in an alliance or not, they both have a date with the Death Machine!

Check out the @RicFlairNatrBoy moment of the week presented by @StarrcastEvents!

The Ric Flair Moment of the Week is presented by Starrcast V.

Gia Miller interviews Mia Yim, who is scheduled to challenge Jordynne Grace for the Knockouts World Title at Emergence. After suffering her first pinfall loss since return to IMPACT Wrestling, Miller asks her if that’s going to affect her momentum heading into big event. The feed cuts out as Tom Hannifan and Matthew Rehwoldt apologize for the technical difficulties.

BREAKING: @ScottDAmore has made it OFFICIAL!

Scott D’Amore rushes to the production truck where he discovers that Honor No More is responsible for the interruptions. D’Amore grants Honor No More a chance to earn the IMPACT World Tag Team Title shot they so desperately desire. At Emergence, Honor No More will battle Bullet Club in a five on five showdown – if Honor No More wins, they will receive their title shot but if they lose, they must disband!

Don’t miss an all-new IMPACT! next Thursday at 8/7c on AXS TV and 8:30pm ET on YouTube for IMPACT Insiders. Knockouts World Tag Team Champion Rosemary goes one on one with Deonna Purrazzo. Brian Myers defends the Digital Media Title against Black Taurus. Masha Slamovich looks to make Gisele Shaw her next victim. Plus, Doc Gallows collides with PCO in a Derby City Street Fight and more!

What A Main Event! #IMPACTonAXSTV pic.twitter.com/tN7DrM4rF3

KUSHIDA makes his highly-anticipated IMPACT in-ring debut as he squares off with former IMPACT World Champion Rich Swann! KUSHIDA targets the left arm in the early going. Swann starts to build momentum with a dropkick. KUSHIDA ducks, causing Swann to chop the steel ring post. Both men are down following in-sync running crossbodies. KUSHDA quickens the pace with a flurry of strikes, followed by a Pele kick. KUSHIDA locks in the Armbar but Swann counters into a pinning opportunity for two. Swann hits a neckbreaker, followed by a running kick but it’s not enough to keep KUSHIDA down. KUSHIDA secures a Kimura on the top rope, then locks in the Hoverboard Lock to win by submission!

After the match, KUSHIDA celebrates his victory as IMPACT! goes off the air.