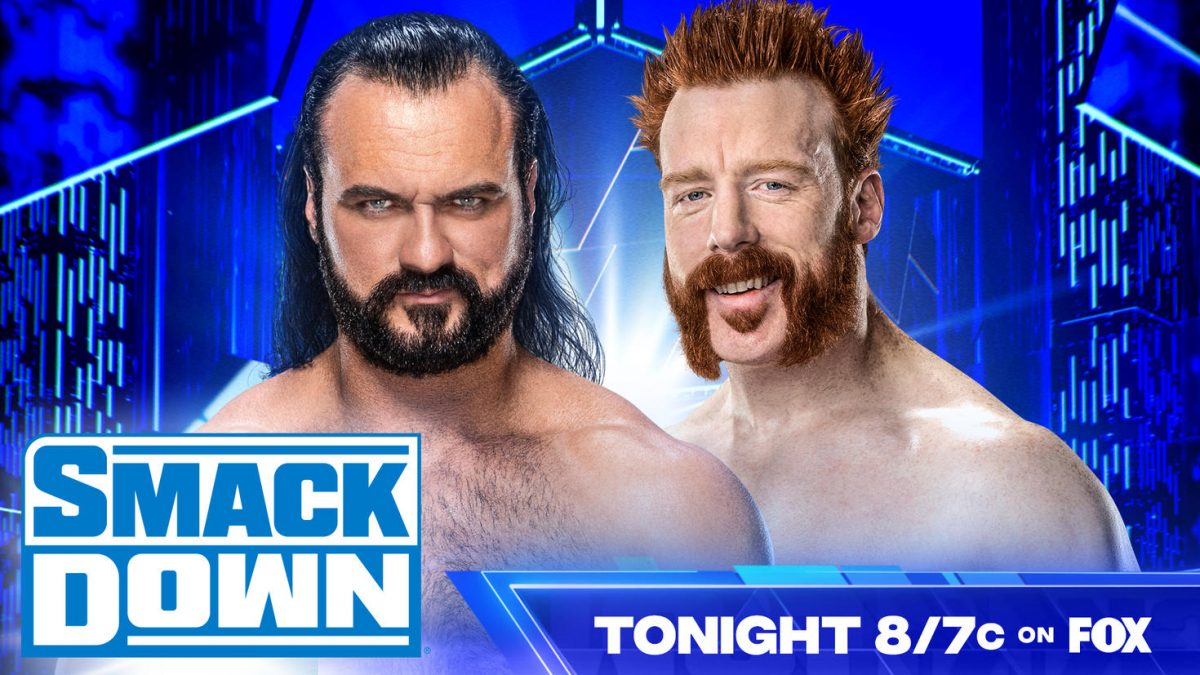 Sheamus with right hands in the corner. He runs towards Drew but Drew with a clothesline. A chop by Drew as he throws Sheamus to the ropes and Drew with a Michinoku driver. He goes for the cover but Sheamus kicks out. Sheamus rolls to the outside of the ring. Drew on the ring apron but Sheamus trips him up.

Sheamus grabs a sheleighleigh but Drew gets in the ring. Drew with a back suplex and Drew with the sheleighleigh. He grabs it but Sheamus with a kick and he clotheslines Drew to the outside of the ring. Right hands by Drew as he throws Sheamus over the announce table.

Back from commercial, Drew with a chop to the chest. He runs to the ropes but Sheamus with a bodyslam. Sheamus to the outside of the ring and he grabs a steel chair. He gets in the ring and hits Drew with it across the back. Sheamus places the chair in between the second and third rope in the corner. Sheamus goes for the white noise but Drew lands on his feet. The chair in the corner falls and Drew throws Sheamus shoulder first into the corner. Drew with an overhead throw. Drew with a neck breaker. Drew to the outside and he throws a few chairs into the ring. Drew gets back in the ring and Sheamus throws a chair onto Drew. Sheamus goes for the white noise on the steel chairs but Drew lands on his feet.

Drew with the futureshock DDT onto the chairs. Drew goes for the cover but Sheamus kicks out. Ridge Holland hits Drew with a sheleighleigh from behind. Sheamus hits Drew with a knee to the face. He goes for the cover but Drew kicks out. Drew to the outside of the ring. Holland picks him up but Drew lands on his feet. Drew throws Ridge into the ring post. He grabs Holland and throws him through the table onto the barricade.

Back from commercial, both men are on the top rope as Drew throws Sheamus down onto the mat. A table is placed in the ring. Drew goes for the Claymore but Sheamus moves out of the way. Sheamus with an Alabama slam. He goes for the cover but Drew kicks out. Drew onto the outside of the ring. With chairs and a bar on the outside of the ring, Sheamus grabs Drew but Drew reverses it and throws Sheamus into the bar.

Drew turns around and Butch jumps off the top of several barrels. Sheamus hits Drew with a bar stool from behind. He throws Drew back into the ring. Sheamus places Drew on his shoulders and climbs the second rope. He hits Drew with the white noise. Sheamus goes for the cover but Drew kicks out. Sheamus gives Butch instructions and Butch grabs a sheleighleigh that is several feet long. He turns around but Drew hits him with the Glasgow kiss. Butch gets into the ring as Drew hits him with the sheleighleigh. He hits Sheamus with the sheleighleigh.

Sheamus grabs a sheleighleigh as he turns around and Drew hits him with a Claymore. He goes for the cover and gets the pin.

Kayla gets in the ring after the match. Drew calls Atlanta Hotlanta. He tells Sheamus it didn’t have to be this way but he knew what he had to do because someone had to get the titles off the part time champions. Out comes Theory from behind as he hits Drew several times with the Money in the Bank briefcase.

We cut to Pat McAfee and Michael Cole as Happy Corbin is in attendance in the first row. He shows his ticket and he holds up a sign with the word loser on it with Pat’s face on it.

After commercials, Michael Cole and Pat McAfee are running through the SummerSlam card as Happy Corbin starts throwing popcorn at McAfee.

Out come WWE officials. Corbin throws the entire bag of popcorn onto McAfee and jumps the rail. Adam Pearce and WWE officials break it up. Corbin kicks Pat in the family jewels as McAfee falls to the ground.

Back from commercial, Kayla is with Theory. He tells her he is sick and tired of everyone treating him like a punching bag. He says he is going to be a future WWE Undisputed Universal Champion and he is already the youngest Money in the Bank winner. He says many are jealous of him but that won’t stop him from him becoming the new WWE Undisputed Universal Champion. He says last Friday Lesnar hit him with an F5 but he won’t stop him. On Raw, Roman Reigns and The Usos hit him but that won’t stop him. And he will make Drew his punching bag.

Theory walks away but Heyman is standing there as the two talk and the camera cuts to ringside. Pat and Cole are sitting as Pat calls Corbin a scumbag.

The bell rings and we are under way. Aliyah with a Lou Thesz press. She gets up but Shotzi slams her onto the mat. Shotzi stomps on Aliyah in the corner. Shotzi goes for the cover but Aliyah kicks out. Shotzi with the Walls of Jericho. Aliyah kicks Shotzi away.

Aliyah with right hands. Aliyah runs to the ropes and she hits Shotzi with a clothesline. She goes for the cover but Shotzi kicks out. Shotzi rolls to the outside of the ring. Aliyah on the ring apron as she hits Shotzi with a meteora off the ring apron. She grabs Shotzi but Shotzi throws Aliyah into the ring post. She throws Aliyah back into the ring. Shotzi with the Never Wake Up. She goes for the cover and gets the pin.

We see a promo from last week where Sonya said no one in the locker room would be able to get her out of the ring. Out came Ronda Rousey who hit her with an arm bar.

We cut backstage as Ronda and Liv Morgan are taking pictures for their SummerSlam match. In comes Natalya who tells Liv that she is a champion because of her. In comes Sonya who tells Ronda that she came out to hurt her after she had already lost.

We cut to the ring and Shotzi is talking and out comes Ronda Rousey. Shotzi tells her hi and goes for a right hand but Ronda throws her down. She tells Shotzi bye as Shotzi leaves the ring. A fan tells Ronda to shut up and no one wants to hear her talk but Ronda tells the fan they suck and that their mom failed them. She calls Liv out to the ring.

The bell rings and we are under way. Ronda and Natalya start the match Natalya with an arm bar but Ronda reverses it. A take down by Ronda as she goes for the cover but Natalya kicks out. Liv is tagged in as they double team Natalya. She tags Sonya into the match and Sonya with a right hand. Sonya with kicks onto Liv. Sonya runs to the ropes but Liv with a drop kick. Liv with a back elbow.

A headlock by Natalya as Liv gets to her feet. Natalya throws Liv to the outside of the ring. Natalya with a suplex.

Sonya with a head lock. Liv with right hands and a kick to the side of the head. Liv looks at Ronda and refuses to tag her in. Natalya is tagged in and a clothesline onto Liv. She goes for the cover but Liv kicks out. Natalya runs towards Liv but Liv with a drop toe hold. Sonya is tagged in and Liv tags Ronda in. Ronda with the Piper’s Pit. Ronda goes for the arm bar but Natalya hits her from behind. Liv hits Natalya with the Oblivion. Ronda with the ankle lock on Sonya and Sonya taps out.

Jeff Jarret says he has something to say. He says he thought it would be a good idea for all of them to talk before SummerSlam. He wants them understand how serious he takes his job as special guest referee. Jey asks him if it’s a DQ if he hits Montez in the nose and makes him bleed like he did on Monday. Dawkins asks if it’s a DQ if he hits Jimmy so bad he comes back with face paint on. Jarrett says they have creative imaginations.

Jarrett tells them he is not there to contain them. He is there to let them run wild. All he has to do tomorrow is when two shoulders are on the mat, he has to count to three. But as for tonight, it’s apparent that they have some outstanding issues. If one of them feels froggy, they should jump.

Dawkins asks him if it’s a DQ if he and as he is talking, all four men start to fight. Jey accidentally hits Jeff Jarrett with a super kick. The Usos check on Jarrett but he pishes them away. Dawkins throws the Usos to the outside. Ford jumps over the top rope and onto them.

Maxxine Dupri is backstage with with ma.ce and man.soor to showcase the MMM 2022 Beachwear Collection. In comes Max Dupri who says he is still looking for new models.

The New Day vs. The Viking Raiders

The bell rings and we are under way. Woods and Erik start the match. Erik with a clothesline. He throws Woods to the ropes as Kofi tags himself in and Kofi with a cross body off the top rope. He goes for the cover but Erik kicks out. Erik runs towards Erik but Erik with a kick to the face. Ivar is tagged into the match. They double team Kofi. Erik is tagged back in. Kofi with right hands and Ivar is tagged in. He grabs Kofi and throws him to the outside of the ring. He throws Kofi into the barricade.

Erik lifts Woods up but Woods lands on his feet. A kick by Woods and Kofi is tagged in. Kofi with a splash off the top rope. He goes for the cover but Ivar breaks it up. Ivar with a spinning kick onto Woods. Kofi with a kick onto Ivar.

Erik with a kick to the face. Ivar is tagged in as they double team Kofi. A double powerbomb onto Kofi. Ivar goes for the cover and gets the pin.

Paul Heyman is standing in the ring. He introduces himself and says he is the special counsel to the tribal chief. The one and only Undisputed heavyweight champion and not just all of WWE but all of sports entertainment. The goat, the head of the table and tomorrow night at SummerSlam, the last man standing. Roman Reigns.

Heyman says 700 days in the modern era as the heavyweight champion. An unheard of accomplishment. Not for a few years, not for a decade but for 35 years no one has gotten to 700 days as the heavyweight champion. And the spoiler tomorrow is Brock Lesnar. Heyman says over his damn dead body. He says Roman will not pin Lesnar, he will put Brock Lesnar down for 10 seconds. And he will stand over a defeated, humiliated, embarrassed and victimized Brock Lesnar and hold both titles in the air. He will be the last man standing and he will be done with Brock Lesnar once and for all.

Out comes Brock Lesnar. He gets in the ring as Heyman extends the microphone but Lesnar walks towards him.

Theory hits Lesnar from behind with the Money in the Bank briefcase but Lesnar stays on his feet. Lesnar grabs the briefcase and hits Theory with it. Lesnar with a German suplex. Theory to the outside of the ring as he grabs his briefcase.

He turns around and Drew McIntyre hits him with the Claymore. Drew looks at Lesnar as Drew’s music hits.