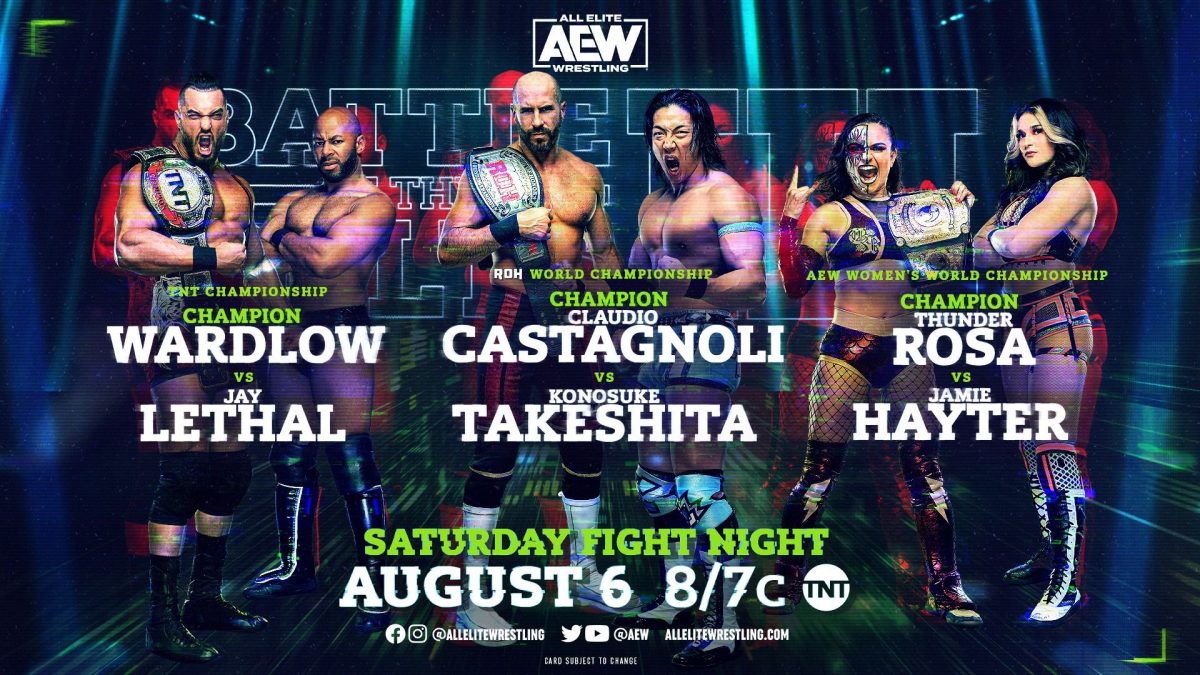 Results by Josh Boutwell of WrestleView.com

Lethal stalls on the floor to open the match but when Dutt distracts Wardlow, Lethal jumps him from behind. He hits a Snap Suplex but Wardlow pops right back up and hits a Big Boot. Wardlow hits a Backdrop and then clotheslines him over the top to the floor. Wardlow chases Lethal on the outside but gets distracted again allowing Lethal to attack him from behind. Back in the ring, Lethal hits an Enziguri but walks into a Tilt-A-Whirl Side Slam for a nearfall.

Lethal tries to fight back with a pair of dropkicks but Wardlow just shrugs them off. Lethal then sells a knee injury and when the referee backs Wardlow off, Lethal jumps up and rolls him up for a nearfall. Wardlow charges at Lethal but he moves and Wardlow goes crashing through the ropes into the ring post. Lethal hits a Tope Suicida onto Wardlow on the floor. Lethal then slams Wardlow’s knee into the ring post.

Singh and Dutt attack Wardlow after the match but Wardlow fights them off and kicks Singh in the nuts. Wardlow goes for the Powerbomb on Singh but Lethal kicks him in the knee. Singh then Chokeslams Wardlow through a table.

Hayter attacks Rosa as she makes her entrance and beats her down in the corner. Hayter chokes Rosa in the ropes and connects with a Snap Suplex before stomping her head into the mat. Hayter blatantly chokes Rosa in the corner and connects with a Shoulder Block after shoving her into the ropes. Rosa hits a series of dropkicks as she rallies a comeback and Hayter rolls to the floor to get away from her. Rosa goes for a Tope Suicida but Hayter elbows her in the face as she dove.

Hayter throws Rosa into the barricade and attempts a Suplex on the floor, but Rosa counters into a DDT. In the ring, Rosa covers Hayter for a two and goes to the top but Baker distracts her with the Women’s Title allowing Hayter to knock her off the top. Hayter then hits a Uranage Suplex onto the ring steps.

Hayter and Rosa exchange forearms until Rosa hits a Bridging Northern Lights Suplex for two. Rosa hits a WICKED Flying Drokick to Hayter – who was leaning against the ropes – sending Hayter crashing to the floor. Rosa hits a Cannonball Senton off the apron onto Hayter. Rosa hits a Flying Cross Body off the top for a nearfall. Rosa goes for a rollup but Hayter blocks it and hits a Backbreaker for two.

Hayter hits a Brainbuster for a nearfall. Hayter throws Rosa into the corner and hits a series of elbows. As the referee warns Hayter, Baker chokes Rosa. Storm attacks Baker but Baker shoves her away and hits a Superkick. Baker talks trash to the camera allowing Storm to recover and hit a Diving Tornado DDT off the ring steps. This distracts Hayter allowing Rosa to roll her up for two. Rosa then catches Hayter with a Cazadora for the pin.

Highlights of FTR’s win at Death before Dishonor are shown. They will wrestle on Dynamite. Madison Rayne will also challenge Jade for the TBS Championship.

Claudio and Takeshita both go for strikes right off the bat but both miss. Takeshita goes for a German Suplex but Claudio hangs on to the ropes and they stare each other down. They finally lock up and Takeshita puts Claudio in a Top Wristlock only for Claudio to take him down and put him in a Knee Lock. Claudio transitions into a Side Headlock, but Takeshita fights up to his feet and Claudio counters into an Armbar and takes him down. Claudio puts Takeshita in a Double Knuckle Lock and holds him down for a one count but Takeshita bridges up and then bridges to his feet only for Claudio to take him back down to the mat for a nearfall. Takeshita bridges up again but this time Caludio tries to slam him down only for Takeshita to catch him with a Monkey Flip. Claudio rolls through and Monkey Flips Takeshita but he lands on his feet!

They continue to mat wrestle with Takeshita elbowing Claudio’s knee and locking him in a Knee Bar. Claudio reverses it into a headlock but Takeshita fights back up to his feet and goes for a Hip Toss only for Claudio to land on his feet. Takeshita manages to catch him with the Hip Toss when Claudio lands on the mat. Claudio tries to take Takeshita down but Takeshita puts him in a Front Facelock. Claudio reverses the hold and takes him down with a Side Headlock takeover. Takeshita manages to roll Claudio over for a one count.

Takeshita shoves Claudio into the ropes but eats a shoulder block. Claudio takes Takeshita down with a Waistlock but Takeshita springs back up and hits an Armdrag followed by a dropkick. Claudio rolls out to the floor and Takeshita goes for a Slingshot Plancha only for Claudio to move. Claudio slams Takeshita into the apron and then back in the ring he elbows him in the back and hits a Backbreaker. Claudio hits a Tilt-A-Whirl Backbreaker for two.

Takeshita goes for the Dragon Knee but Claudio blocks it and goes for a Uppercut only for Takeshita to move. Takeshita flies off the ropes right into a Uppercut in midair for two! Claudio puts Takeshita into a Sharpshooter but as Takeshita almost gets to the ropes, Claudio transitions into a Crossface. Takeshita rolls Claudio over into a nearfall, which forces Claudio to break the hold to kick out.

Claudio and Takeshita exchange strikes with Takeshita catching him with a German Suplex! Claudio rolls through and hits a Lariat but Takeshita gets back up and hits another German Suplex followed by a Lariat! 1…2…NO Claudio kicks out! The entire crowd is on their feet at this point. Takeshita hits a series of strikes but eats a Uppercut from Claudio. He goes for the Pop Up Uppercut but Takeshita counters into a Backslide for two followed by the Dragon Knee and a Brainbuster! 1…2…NO Claudio kicks out!

Takeshita hits the Roaring Elbow and goes for the Cinabomb but his back gives out allowing Claudio to backdrop him only for Takeshita to roll him up for two. Claudio gets up and hits a Diving Uppercut followed by a Swiss Stomp! Claudio attempts the Ricola Bomb but Takeshita reverses into a Hurricanrana for two! Takeshita goes for the Dragon Knee but Claudio catches him in midair with a DVD. They exchange strikes again and Claudio caps it off with a Springboard Uppercut followed by a Lariat. He traps Takeshita’s arm and hits a series of elbows followed by the Ricola Bomb for the pin!